A United Nations report detailed serious and widespread human rights violations in the Philippines. Groups say it offers convincing proof of the “catastrophic” situation in the country and a damning rebuff of the government’s war on drugs. 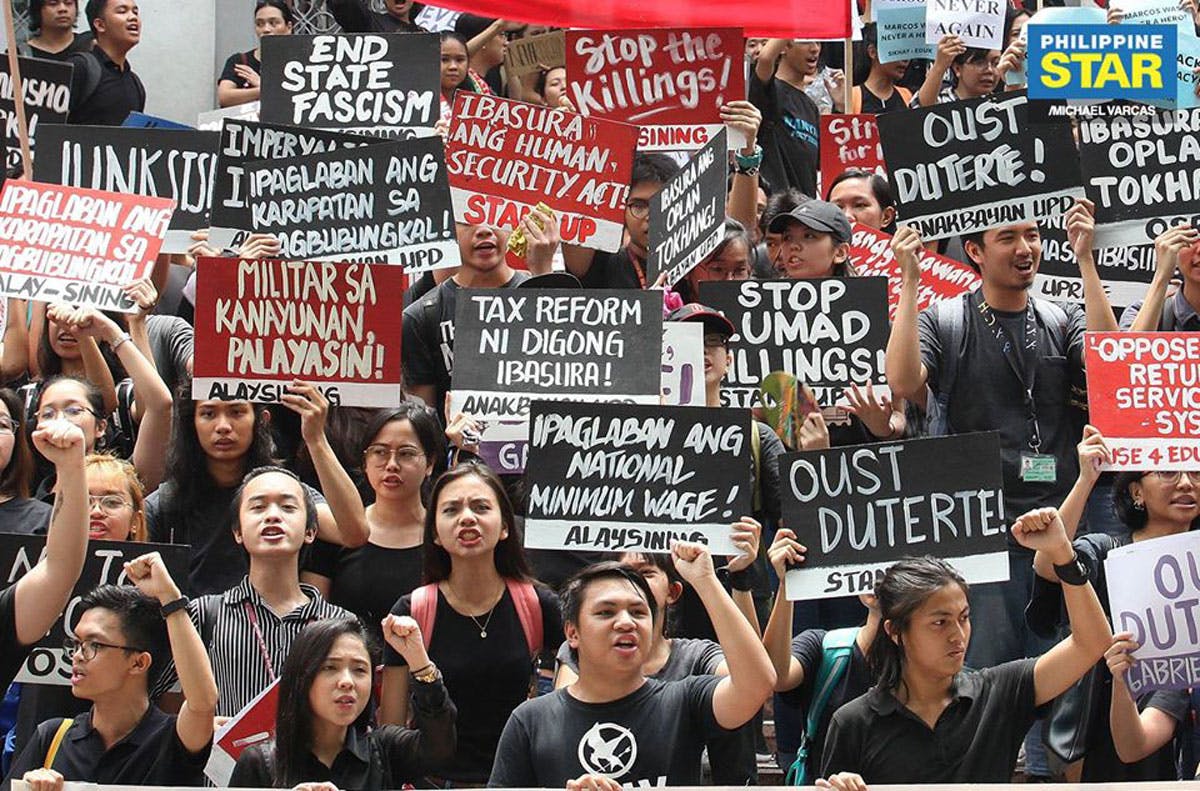 Students of the University of the Philippines in Diliman, Quezon City commemorate the anniversary of the late dictator Ferdinand Marcos' martial law declaration on Sept. 21, 2018 with a firm loud call: #NeverAgain. Photo by Michael Varcas, The Philippine STAR

From indications of planted evidence to what appeared to be "pro-forma" or standardized post-operation spot reports, the United Nations Office of the High Commissioner for Human Rights (UN OHCHR) has unearthed widespread and serious human rights violations in the Philippines, including those in connection with the government’s so-called war against illegal drugs.

The 26-page report, mandated by a resolution from the UN Human Rights Council last year, looked into 893 written submissions, government policies and data, open source materials, interviews with victims and witnesses, and input from the government.

It noted persistent impunity in human rights violations and insurmountable practical obstacles to accessing justice within the country.

“While there have been important human rights gains in recent years, particularly in economic and social rights, the underpinning focus on national security threats – real and inflated – has led to serious human rights violations, reinforced by harmful rhetoric from high-level officials,” the report read.

“This focus has permeated the implementation of existing laws and policies and the adoption of new measures – often at the expense of human rights, due process rights, the rule of law and accountability,” it added.

Human rights groups said the new report offers convincing proof of the “catastrophic” human rights situation in the country, which they say has worsened under the present administration.

The report also documented reports of human rights abuses by non-state actors, including killings, abductions, recruitment of children and extortion by the communist New People’s Army, which is listed by the UN as among parties that commit grave violations affecting children in situations of armed conflict.

Although her office did not receive permission from the government to visit the country, UN High Commissioner for Human Rights Michelle Bachelet welcomed the substantive engagement from the Philippine government in the preparation of the report.

The report noted that the Philippine government has provided substantial written input as well as sent representatives during discussions in Thailand in February.

Phil Robertson, deputy Asia director of Human Rights Watch, expressed belief the report affirms what many rights defenders inside and outside the Philippines have publicly said over the three years in relation to the “wholesale violations of due process and rule of law” in the so-called war on drugs.

“The UN Human Rights office is right to raise concerns about the systematic constriction of the democratic space in the country through intimidating red-tagging, and sometimes assassinating civil society activists, rights defenders, journalists, lawyers and others,” he said.

“What particularly stands out in this report is the almost total lack of accountability for rights violations in the ‘war on drugs’ based on the abject failure of domestic justice mechanisms to function,” he added.

The Ecumenical Voice for Human Rights and Peace in the Philippines (EcuVoice), which is composed of various human rights organizations in the country, described it as a “damning rebuff” of the government and its supposed false narrative and pretensions about human rights.

“It highlights the pernicious practice of vilification, criminalization and elimination of free expression, democratic dissent and the continuing vicious attacks including ‘red-tagging.’ It points out persistent and ‘deep-seated’ impunity and the misogynist and hate language by the Philippine government,” it said.

“It concludes on the ‘troubling lack of due process protections’ and the official language in policy documents that ‘may have emboldened police to treat the circular as permission to kill,’ pertaining to the government campaign against illegal drugs,” it added.

EcuVoice said the facts and reality are undeniable and the report “is a damning indictment of (the government’s) non-compliance with principles, standards, instruments and conventions on human rights.” 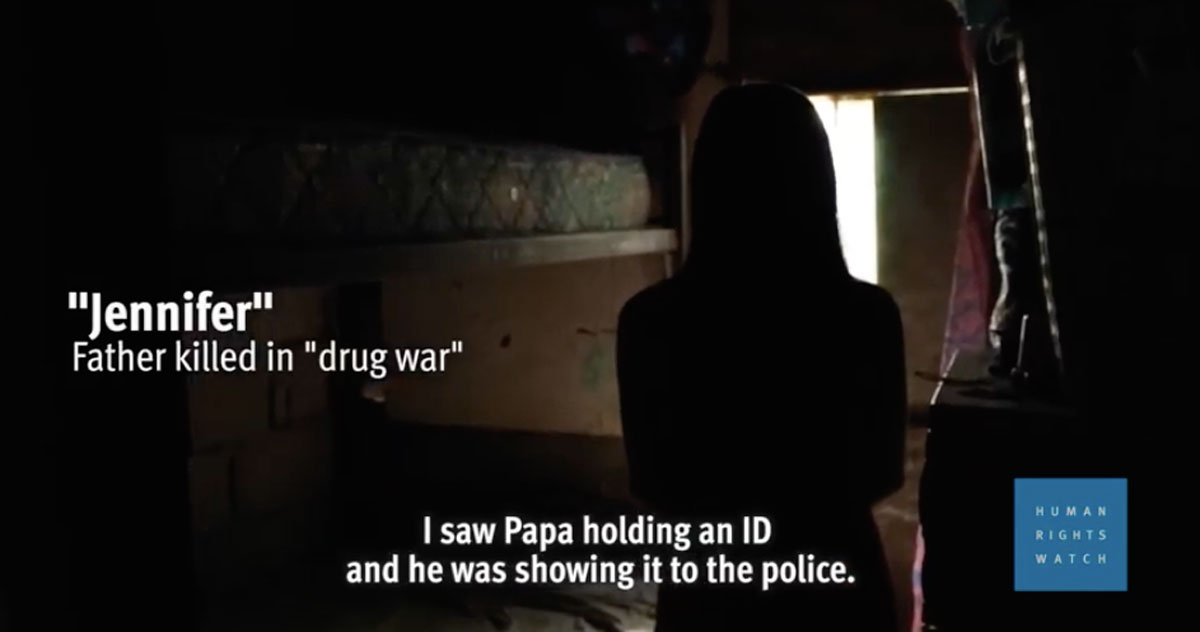 The OHCHR looked into alleged human rights violations that happened in connection with the campaign against illegal drugs of the Duterte administration.

While the OHCHR cannot verify the number of extrajudicial killings without further investigation, it said that the drug-related killings appear to have a widespread and systematic character.

The most conservative figure, based on government data, is that 8,663 people have been killed in police operations since July 2016.

The number could go higher given the thousands of “deaths under investigation,” which the government included in its accomplishment report in 2017. It later said that only 3,062 were drug-related.

On those killed during police operations, the OHCHR said the spot reports “contained strikingly similar language to describe each victim’s alleged utterance… and actions… raising doubts about whether the reports were only filled pro forma.”

“On the basis of these reports, OHCHR found that the police repeatedly recovered guns bearing the same serial numbers from different victims in different locations. OHCHR identified seven handguns with unique serial numbers,” stated the report, citing documents submitted by the police to the Supreme Court.

“Each handgun appeared in at least two separate crime scenes, while two of them re-appeared in five different crime scenes. The pattern suggests planting of evidence by police officers and casts doubt on the self-defense narrative, implying that the victims were likely unarmed at the time of killing,” it said.

In its report, the OHCHR also noted the use of the terms “negation” and “neutralization” of “drug personalities” in the circular enforcing the anti-drug campaign.

“Such ill-defined and ominous language, coupled with repeated verbal encouragement by the highest level of (state) officials to use lethal force may have emboldened police to treat the circular as permission to kill,” it said.

The OHCHR noted the harmful rhetoric from the highest levels of government that have been pervasive and deeply damaging, citing rape jokes, making light of torture, calling for bombing of indigenous peoples, encouraging extreme violence against drug users and peddlers, calling for beheadings of civil society actors, and warning that journalists were not immune from assassination.

It cited a recent remark made by President Duterte, telling police, military and barangay officials to shoot those disobeying orders or creating trouble as the country imposed quarantine measures against the coronavirus disease pandemic.

The report also referred to incendiary language inciting violence uttered by other high-level officials, specifically citing a tweet of Foreign Affairs Secretary Teodoro Locsin Jr. on shooting critics he claimed to be communists.

“While numerous statements by President Duterte are subsequently clarified by his spokesperson and other officials as not to be taken literally, the widespread killings, detentions, red-tagging and score-settling by (state) actors, including in the campaign against illegal drugs, suggest that his public comments may have incited violence and may have had the effect of encouraging, backing or even ordering human rights violations with impunity,” read the report.

“The use of such language could amount to a violation of the prohibition against arbitrary deprivation of life in Article 6 of the International Covenant on Civil and Political Rights,” it added. 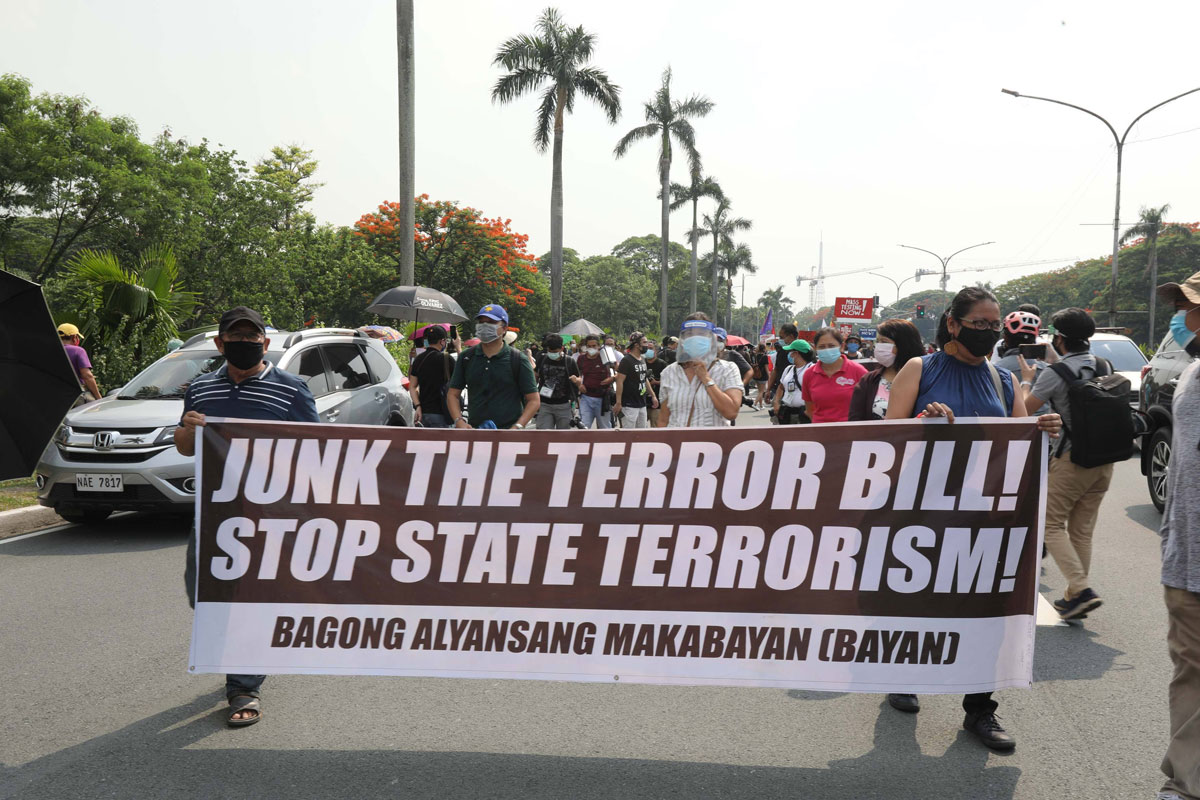 The OHCHR has also noted the impact on human rights of the government’s scaled-up response to countering terrorism and conflicts.

It specifically cited “worrying new laws and amendments” that have been proposed, supposedly to strengthen public order and countering terrorism, but risk eroding constitutional and other legal protections.

The UN office warned that the proposed 2020 Anti-Terrorism Act, which was approved on final reading by the House of Representatives on Wednesday, “dilutes human rights safeguards, broadens the definition of terrorism and expands the period of detention without warrant from three to 14 days, extendable by another 10 days.”

“The vague definitions in the Anti-Terrorism Act may violate the principle of legality,” it said.

Sen. Panfilo Lacson, a former police chief and proponent of the measure in the Senate, has said the provisions were patterned after counterterrorism laws in Australia and the United States.

It also cited proposed bills to restore the death penalty for drug-related offenses and significantly lower the age of criminal responsibility, which it said would breach the country’s obligations under international human rights law.

The report also looked into the phenomenon of “red-tagging” or labeling individuals or groups as communists or terrorists, which it said has posed a serious threat to civil society and freedom of expression.

A clear illustration, read the report, is the inclusion of over 600 names – including rights defenders and a UN special rapporteur – in a government court petition to designate the Communist Party of the Philippines and the New People’s Army (NPA) as terrorist groups. 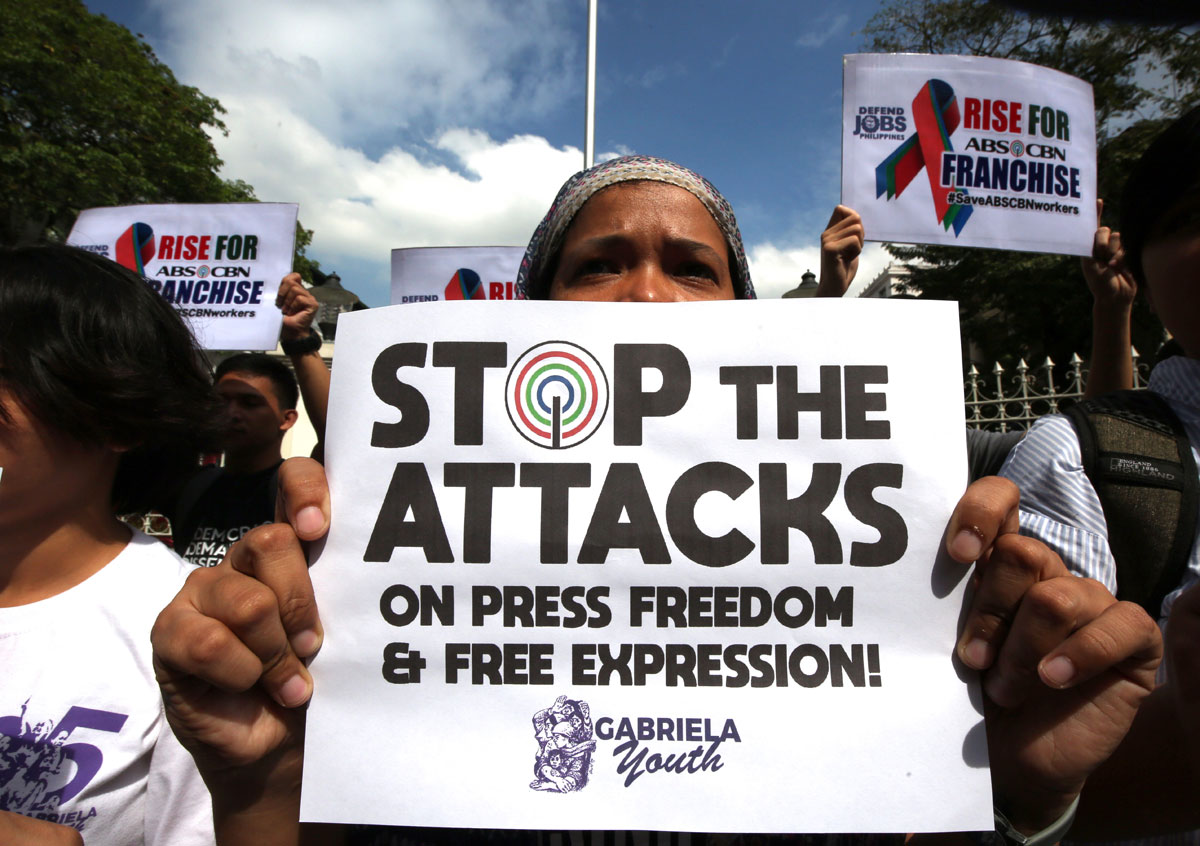 While there have been gains in media protection such as the successful prosecution of those behind the Maguindanao massacre, the OHCHR cited attacks on journalists and media organizations deemed to be critical of the administration.

It cited cases filed against Rappler and its chief executive officer Maria Ressa, and the closure of television network ABS-CBN Corp. over issues on its franchise. The Duterte administration has argued that the moves were not related to press freedom.

The UN office noted how social media, being pervasive in the country, had been used to spread misinformation, troll, red-tag and harass civil society and opposition politicians.

Citizens were also arrested for posting critical content online during the COVID-19 pandemic, it added.

The OHCHR cited killings of human rights defenders, as well as actions against administration critics such as ousted chief justice Maria Lourdes Sereno, detained Sen. Leila de Lima and Vice President Leni Robredo, who was charged with but later cleared of inciting to sedition.

The report, which is set to be presented to the UN Human Rights Council later this month, offers several recommendations to address human rights concerns, including those related to the drug war and national security.

It urged the Philippines to invite rapporteurs and the OHCHR to monitor and report on specific human rights concerns and advise on reviewing policies such as counterterrorism legislation and drug control.

“Unfortunately, the report has documented deep-seated impunity for serious human rights violations, and victims have been deprived of justice for the killings of their loved ones. Their testimonies are heartbreaking,” she said.

“People who use or sell drugs do not lose their human rights,” the high commissioner said. “People who disagree with government policies and criticize them, including in international fora, should not be vilified as terrorist sympathizers. Indigenous peoples should not be victims of a tug-of-war between the (state), non-(state) armed groups and business interests.”