Word war, or more specifically, Twitter war. Tensions over the presence of Chinese vessels at Julian Felipe Reef have spilled over online, with the Chinese embassy retaliating against a tweet by the Japanese ambassador. 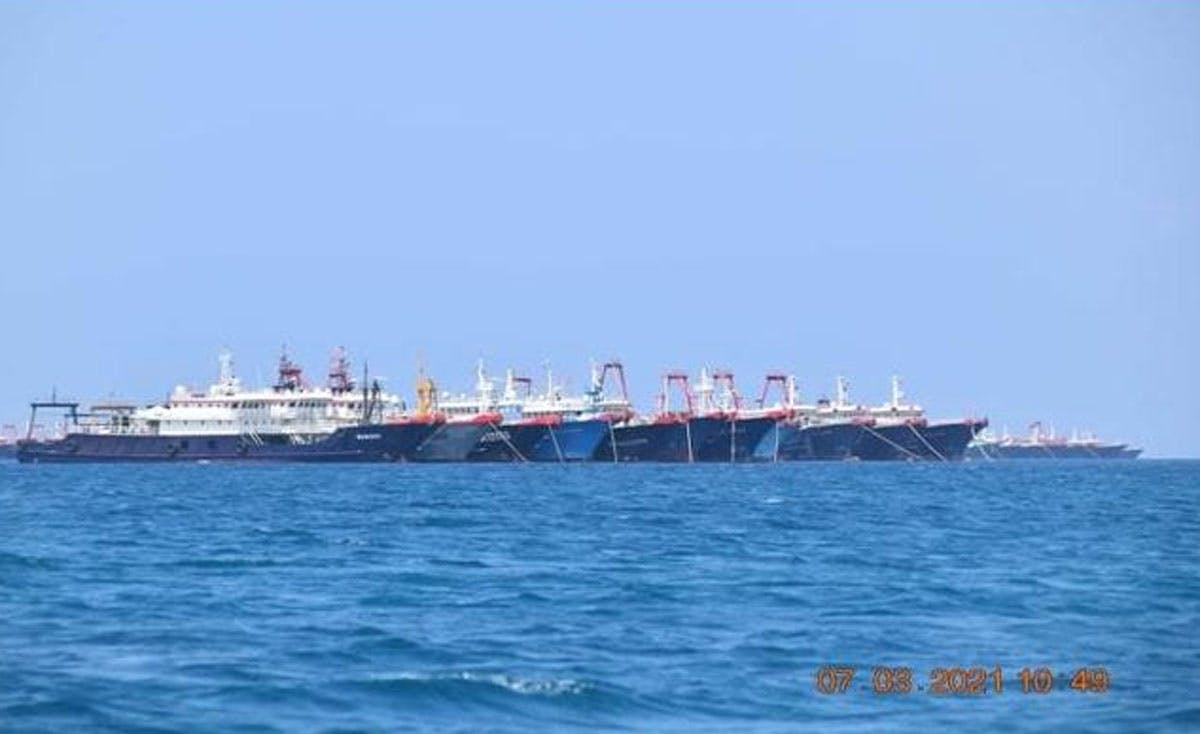 Despite a Philippine diplomatic protest filed on March 21, 2021, Chinese vessels remained at Julian Felipe Reef in the West Philippine Sea as of March 23, 2021. Photo courtesy of the Presidential Communications Operations Office

Tensions over the presence of Chinese vessels at the West Philippine Sea have spilled over on social media after the Chinese embassy in Manila directly responded on Wednesday, March 24, to a statement issued by the Japanese ambassador to the Philippines on his official Twitter account on Tuesday, March 23.

“It is a pity that some Asian country, which has disputes with China in the East China Sea and is driven by the selfish aim to check China's revitalization, willingly stoops to acting as a strategic vassal of the US,” read the statement of the Chinese embassy.

“Such despicable behavior is inviting the wolf into the house, betraying the collective interests of the whole region and doomed to fail,” it added. 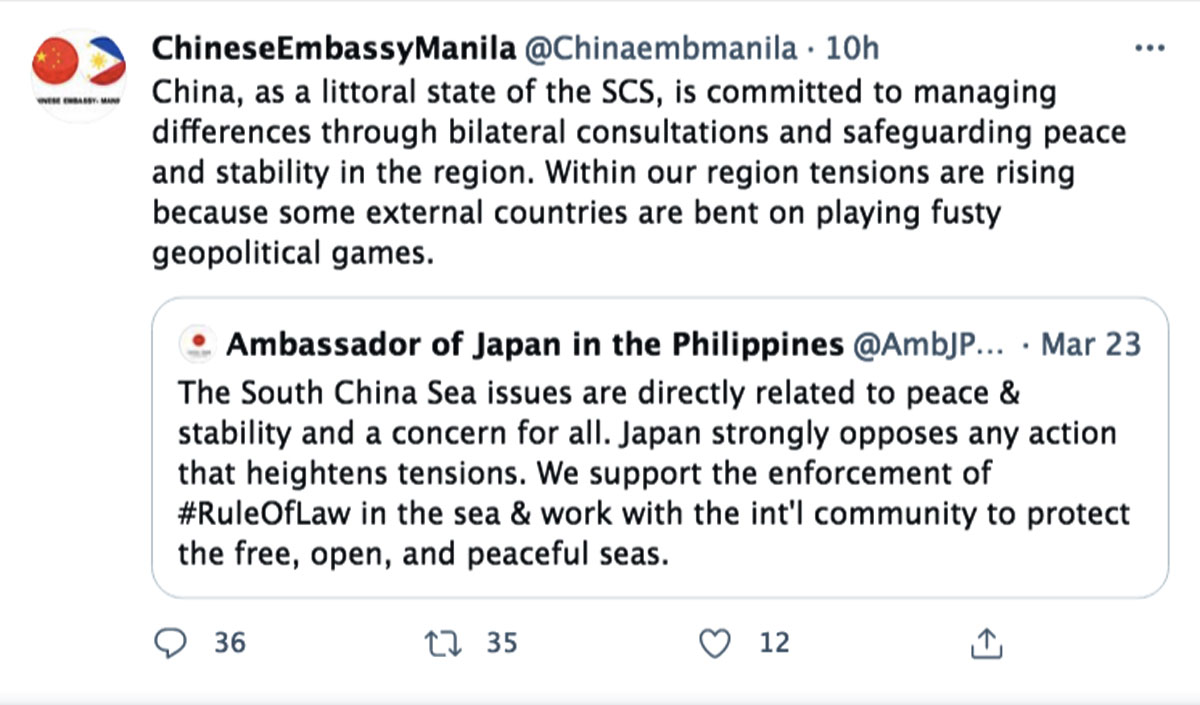 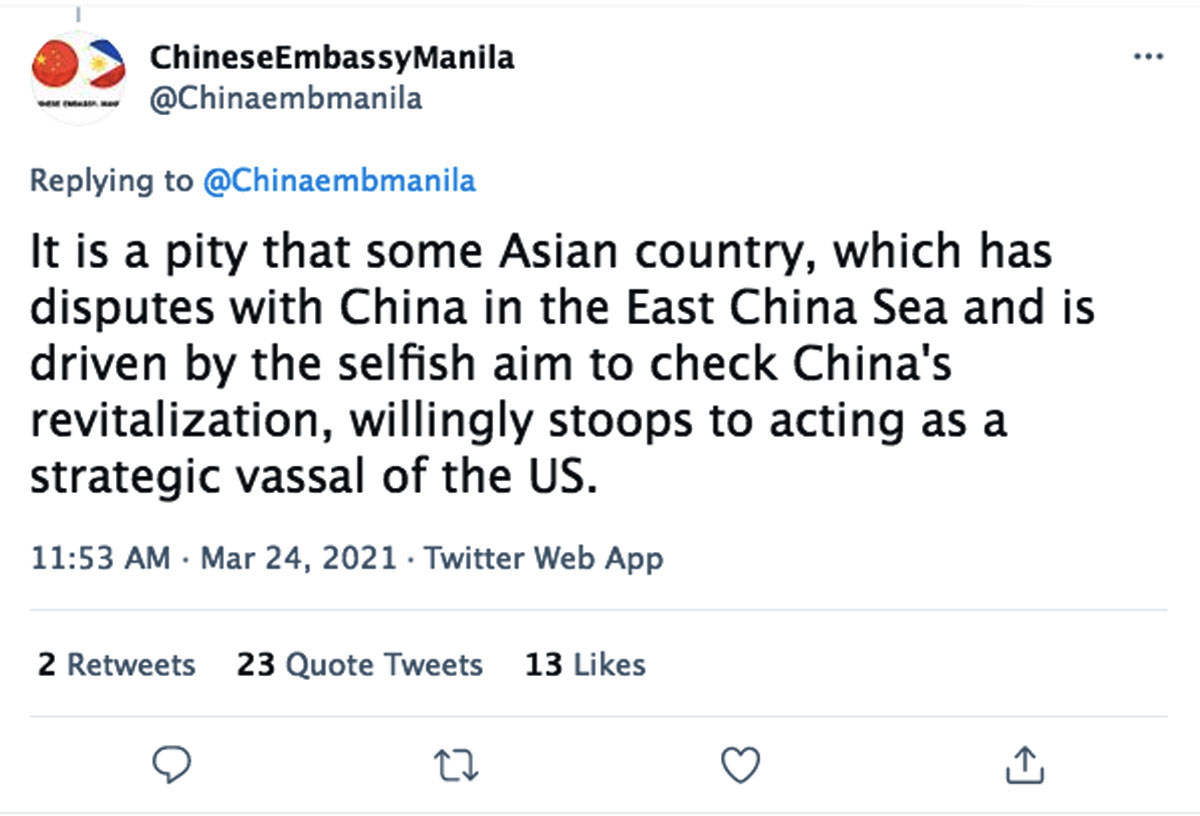 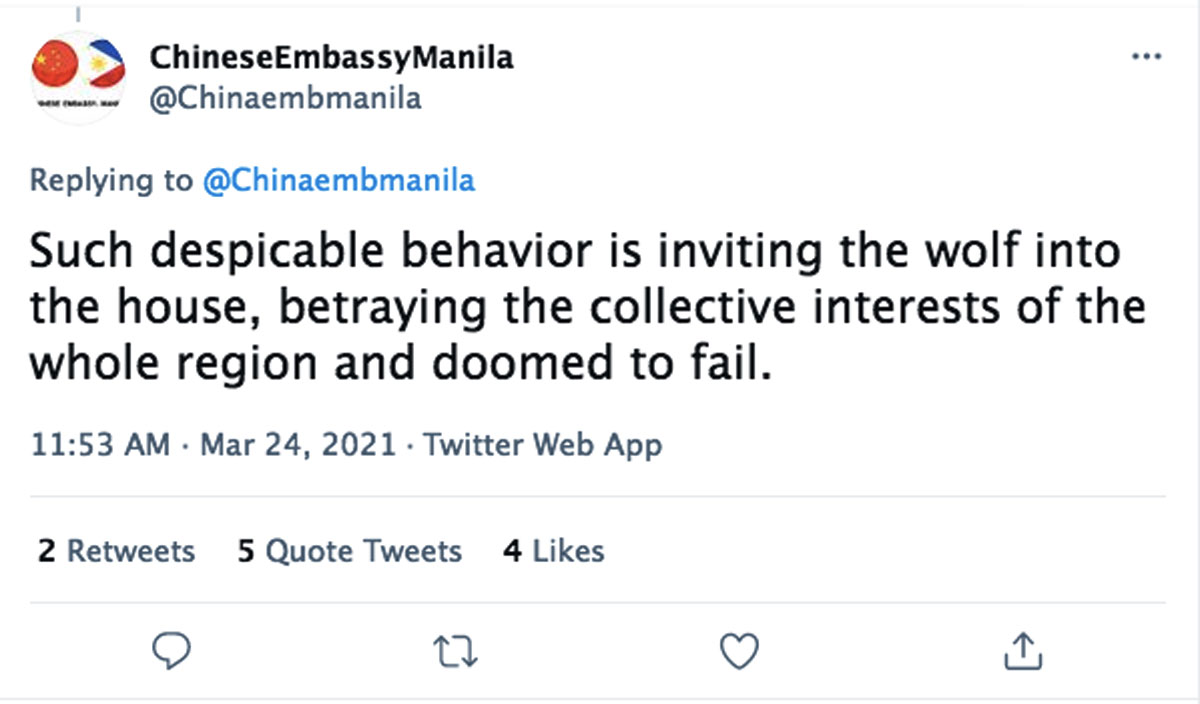 The Chinese embassy, which reiterated its commitment to managing differences through bilateral consultations, was responding to the statement posted on the Twitter account of Japanese Ambassador to the Philippines Koshikawa Kazuhiko.

“The South China Sea issues are directly related to peace & stability and a concern for all. Japan strongly opposes any action that heightens tensions. We support the enforcement of #RuleOfLaw in the sea & work with the int'l community to protect the free, open, and peaceful seas,” Koshikawa said. 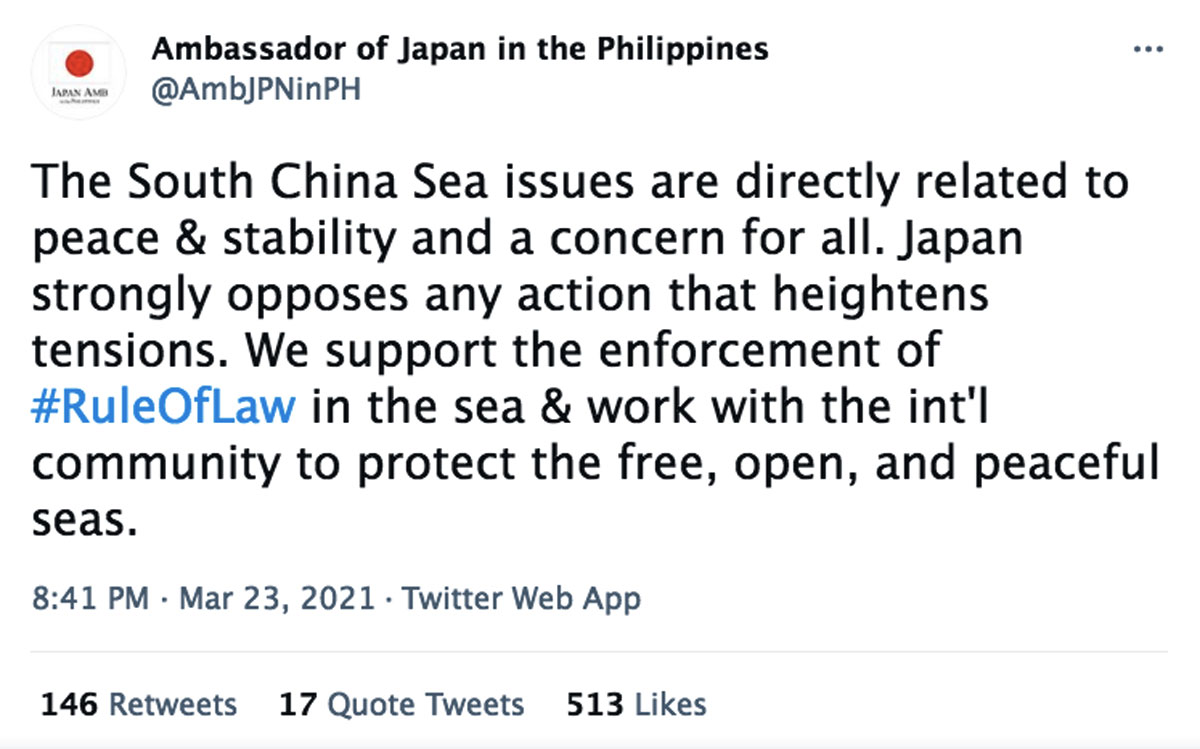 Japan and China are engaged in dispute over the Senkaku Islands in the East China Sea.

Koshikawa issued the statement amid reports that 220 Chinese maritime militia vessels were spotted at Julian Felipe Reef, located 175 nautical miles west of Bataraza, Palawan and is within the Philippines’ exclusive economic zone and continental shelf.

The report, made public by the National Task Force for the West Philippine Sea (NTF-WPS) on Sunday, March 21, prompted the Department of Foreign Affairs (DFA) to file a diplomatic protest against China and demanded the withdrawal of its maritime assets at the Kalayaan Group of Islands on Tuesday, saying Beijing must also direct its fishing vessels to desist from environmentally destructive activities.

The DFA said in a statement after filing the protest that Julian Felipe Reef in the Kalayaan Island Group lies in the country’s exclusive economic zone and that the “continued deployment, lingering presence and activities of Chinese vessels in the Philippine maritime zones blatantly infringe upon Philippine sovereignty, sovereign rights, and jurisdiction.”

“China’s continuing infringements and tolerance thereof, notwithstanding the persistent and resolute protests of the government of the Republic of the Philippines, are contrary to China’s commitments under international law and the ASEAN-China Declaration on the Conduct of Parties in the South China Sea,” it added.

Also on Tuesday, the United States embassy stressed that “we share the concerns of our Philippine allies” over the presence of the Chinese vessels at Julian Felipe Reef.

“The PRC (People’s Republic of China) uses maritime militia to intimidate, provoke, and threaten other nations, which undermines peace and security in the region,” the US said.

“Chinese boats have been mooring in this area for many months in ever increasing numbers, regardless of the weather. We stand with the Philippines, our oldest treaty ally in Asia,” it added.

The US noted Defense Secretary Delfin Lorenzana’s call for China to recall the boats and Foreign Affairs Secretary Teodoro Locsin’s  filing of a diplomatic protest. 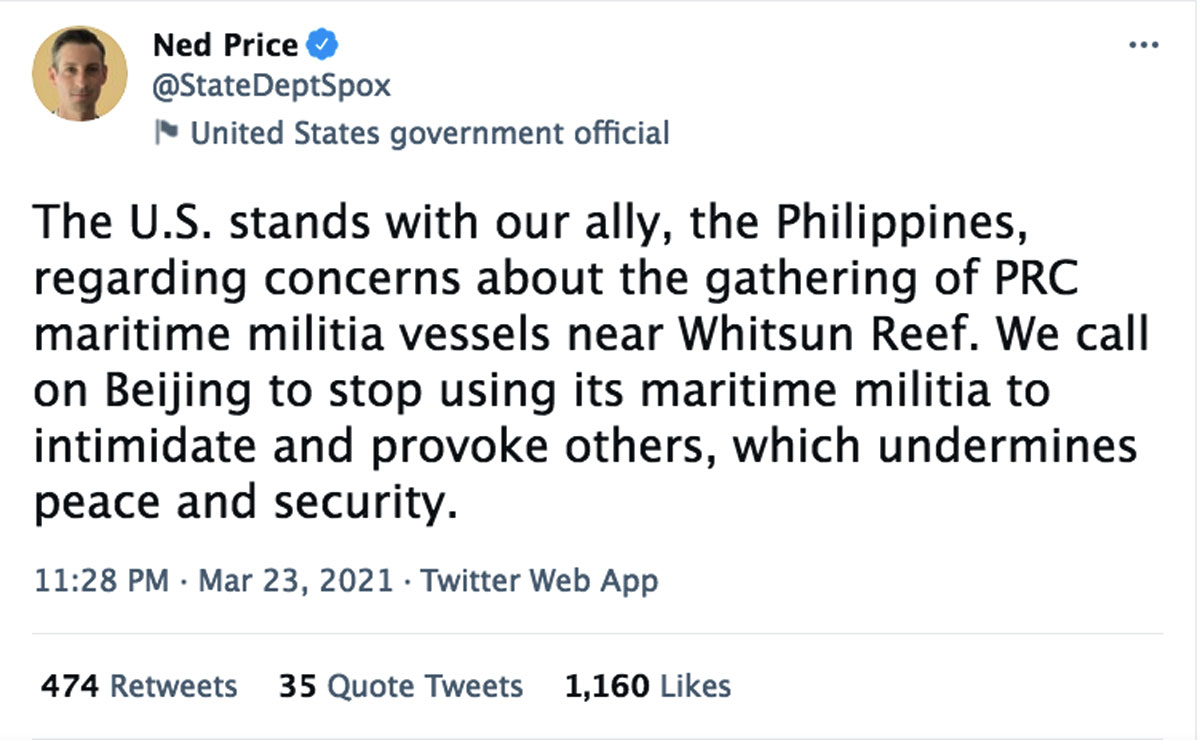 On Wednesday, Australian Ambassador to the Philippines Steven Robinson also expressed support to an Indo-Pacific region that is open and inclusive.

“The South China Sea – a crucial international waterway – is governed by international rules and norms, particularly UNCLOS (United Nations Convention on the Law of the Seas). We remain concerned about destabilizing actions that could provoke escalation,” he added. 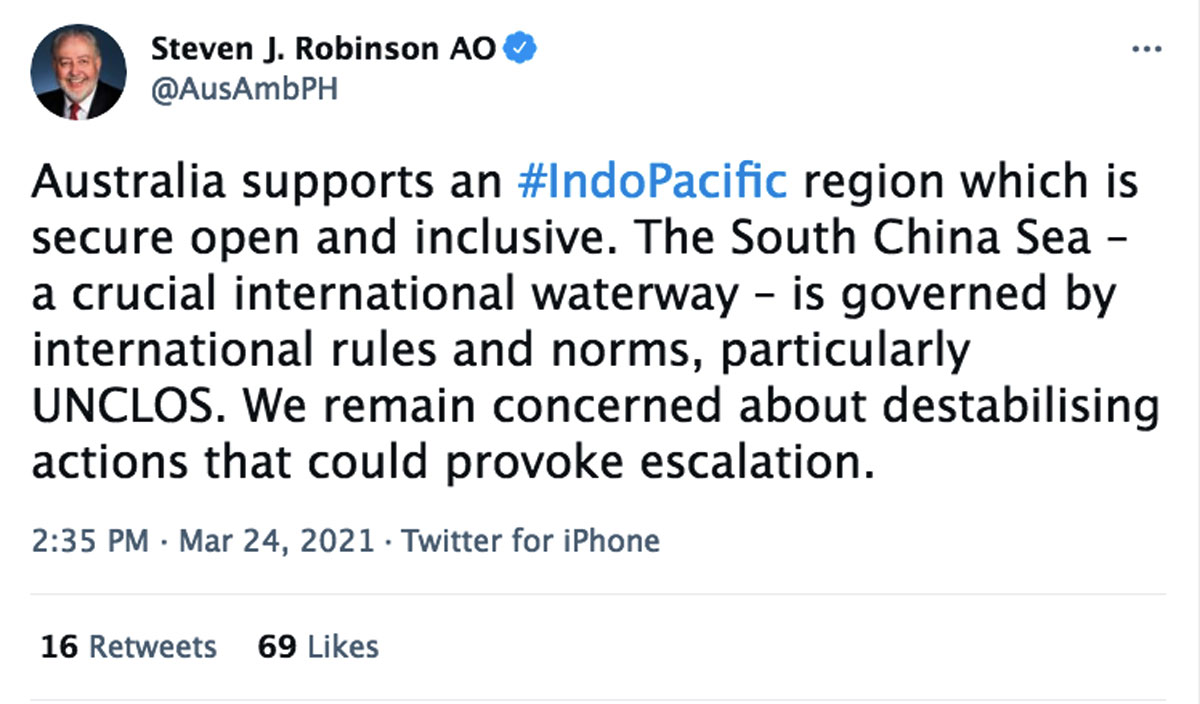 United Kingdom Foreign, Commonwealth, and Development Office Minister for Asia Nigel Adams also tweeted on Tuesday that the Philippines “is an important partner for the UK in the Indo-Pacific.  Earlier I spoke to Secretary of Foreign Affairs @teddyboylocsin about our Integrated Review &our shared concerns on #Myanmar and the South China Sea, including actions which raise tensions there.” 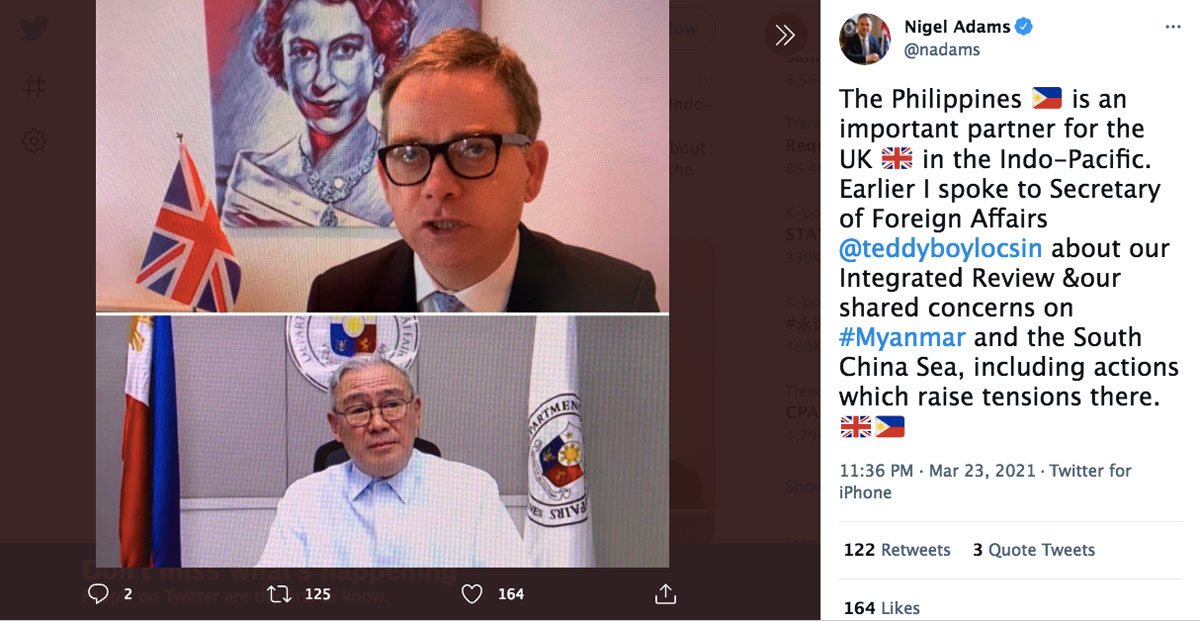 China denied the presence of militia vessels at the reef, which it calls Niu’e Jiao, saying these were fishing vessels that took shelter due to rough sea conditions.

“There is no Chinese maritime militia as alleged. Any speculation in such helps nothing but causes unnecessary irritation,” the Chinese embassy said in a statement.

“It is hoped that the situation could be handled in an objective and rational manner,” it added.

China also maintained that the reef is part of its territory, claiming that the their fishing vessels have been fishing in its adjacent waters for many years.

Citing a report from the Philippine Coast Guard, the NTS-WPS said the foreign vessels were first spotted on March 7.

The Armed Forces of the Philippines said the vessels were still in Julian Felipe Reef as of Tuesday.

Locsin reminded China on Wednesday that the Philippines has an existing Mutual Defense Treaty (MDT) with the US that can be triggered under certain conditions.

“We do have a Mutual Defense Treaty which says very clearly, and has been explained by (former State) Secretary (Mike) Pompeo and (current) Secretary of State (Anthony) Blinken after him, that any attack on a Philippine vessel – however small, as long as it is a government vessel like a Coast Guard – is an attack on the United States and triggers the Mutual Defense Treaty,” he said.

“And believe me, that response is – shall I say – global. And that lies within our power. We must have the courage to go where probably we will not be able to go back from. Because if we don’t send that message to the other side, then they will just keep trenching and trenching and trenching in our territory, and then our sense of nationhood dies,” he added.

Locsin issued the statement towards the end of the hearing of the committee on foreign affairs of the Commission on Appointments on the nominations of several ambassadors.

He said that while the Philippines continues to pursue diplomatic initiatives to ensure peace and stability in the region, the country must also have other means to defend its rightful claim over the West Philippine Sea.

During the hearing, Ambassador Generoso Calonge, who was appointed envoy to Iraq, said he was not sure if diplomatic protests would be enough with the continued Chinese encroachment of Philippine territory.

“My personal view is to develop our Armed Forces so we won’t be very taken very lightly by those near our borders and that include modernization will fact also involves our alliances the regions,” Calonge, who was formerly assistant secretary for the Maritime and Ocean Affairs Office of the DFA.

“I don’t intend to defeat China, that’s impossible. But if we bloody them enough, they will hesitate in looking at us in a condescending manner,” he said. 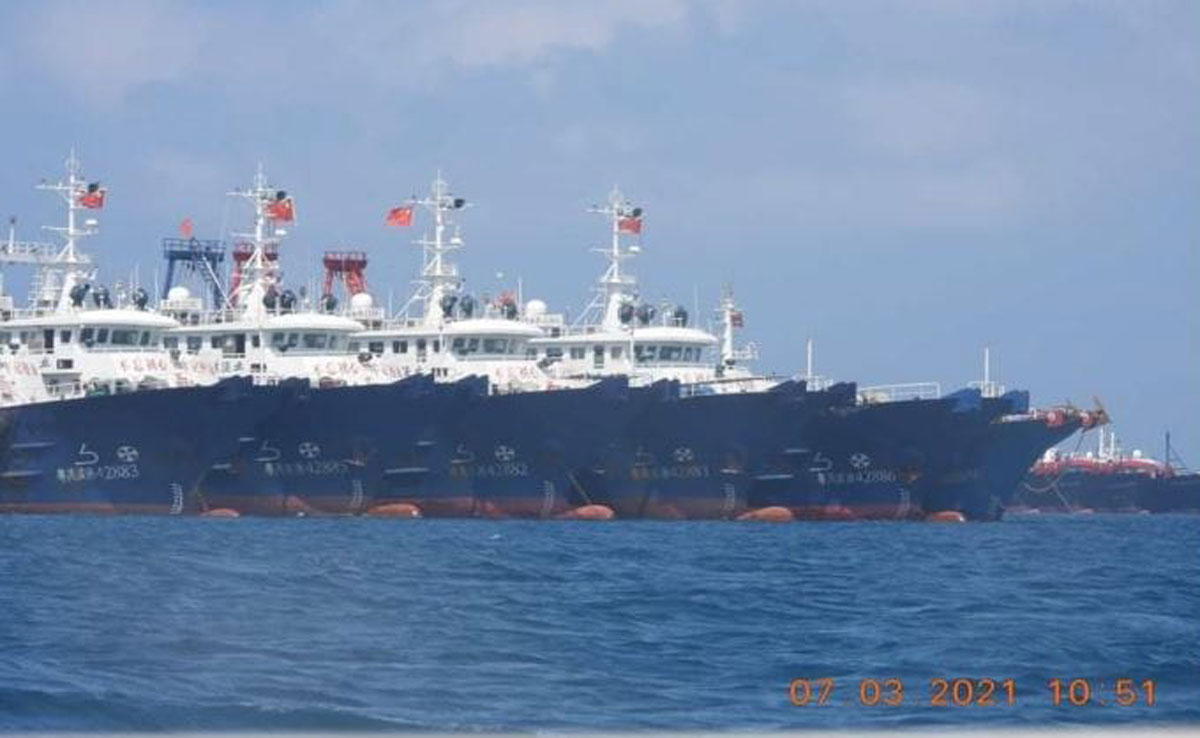 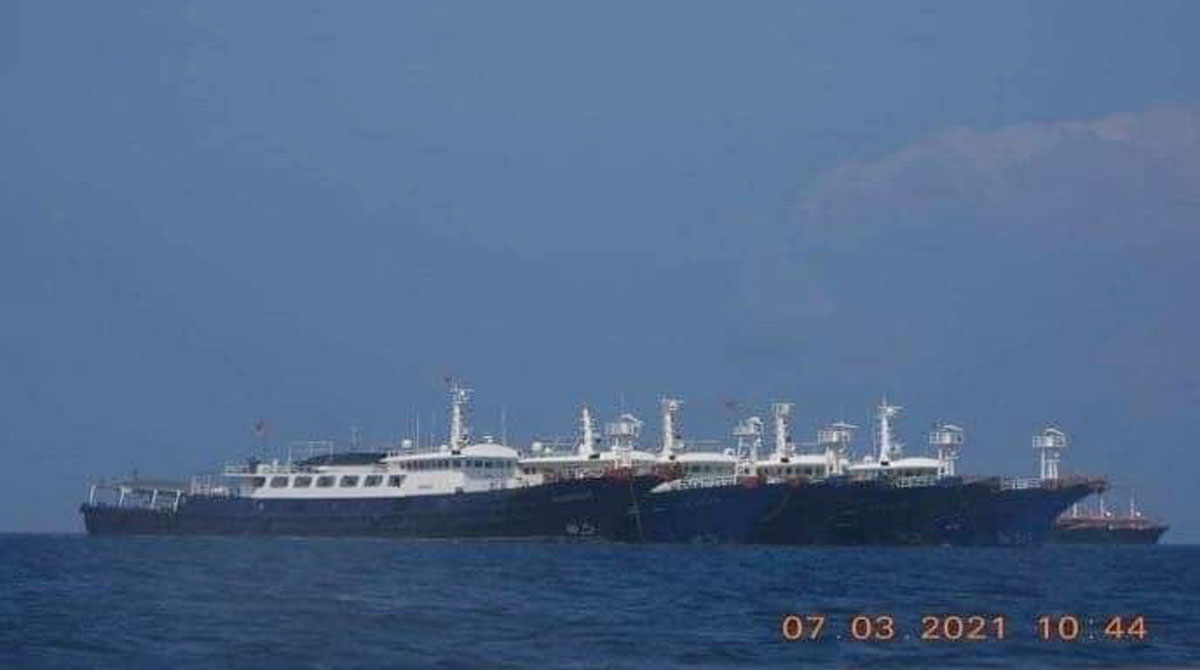 Armed Forces chief Gen. Cirilito Sobejana, in a separate confirmation hearing, said more ships from the Philippine Navy have been deployed to the area where the military counted at least 183 Chinese fishing vessels moored near the reef.

“We deployed naval assets to the area to increase our visibility and ensure the security and safety of our fishermen and protect our marine resource and the integrity of our territory,” Sobejana told lawmakers.

“We don’t tolerate incursions in our territorial waters from anybody,” he said.

Sobejana said a deeper assessment is being made on the presence of the Chinese fishing boats, which he believed were actually part of Beijing’s maritime militia due to their suspicious formation that he described as by “layer” or “forming like a phalanx.”

Sobejana said he was supposed to meet with the Chinese military attaché to discuss the presence of the militia vessels on Wednesday, but decided to send Armed Forces vice chief of staff Lt. Gen. Erickson Gloria to take his place due to the confirmation hearing.

On Monday, March 22, Malacañang expressed confidence that the presence of Chinese maritime militia ships at Julian Felipe Reef won't escalate to something similar to the 2012 Panatag (Scarborough) Shoal standoff.

"I don't think so because we have a close friendship," presidential spokesman Harry Roque said in a press briefing when asked if he thought the incident would lead to a situation similar to what happened in Panatag nine years ago.

"Everything can be discussed by friends and neighbors," he added.

Panatag Shoal is situated 124 nautical miles from the nearest point in Zambales and is within the Philippines' 200-nautical mile exclusive economic zone.  In 2012, a standoff ensued after Chinese vessels stopped Philippine Navy ships from arresting Chinese poachers.  China has since maintained its presence in the traditional fishing ground and exercised control.

Roque said on Tuesday that President Duterte told him on Monday intends to hold a dialogue with Chinese Ambassador to the Philippines Huang Xilian to discuss the issue.