“Editing out” portions of President Duterte’s speech apparently gives Malacañang control over the messages it wants to convey to the public, but not when an audio recording is released by media sources. 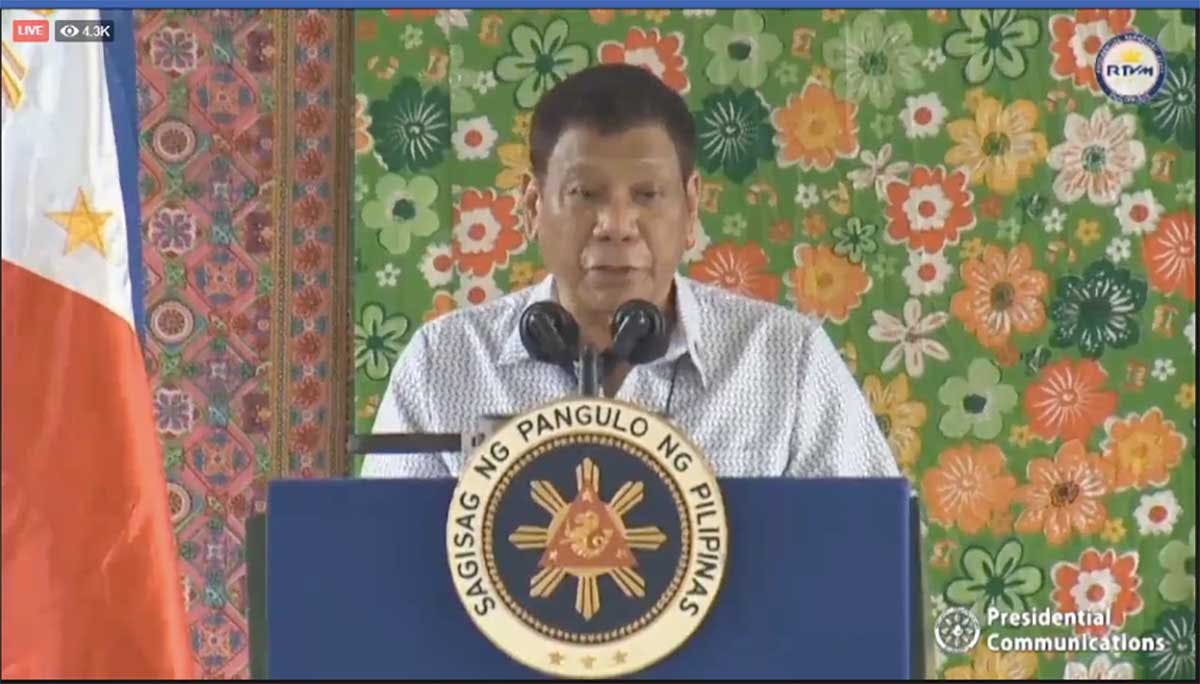 Screenshot of President Duterte while speaking before soldiers at the Kuta General Teodulfo Bautista in Jolo, Sulu on Monday, July 13, 2020.

Malacañang has been saying that President Duterte is “neutral” on the issue involving ABS-CBN Corp. even if critics and several analysts are not buying this, given his previous pronouncements against the network.

Curiously, as the House committee on legislative franchises started its hearings on ABS-CBN’s application for franchise renewal, Duterte’s speeches were no longer aired live. Instead they were pre-recorded.

Presidential spokesman Harry Roque said the speeches were not being edited. But anyone who closely listens to Duterte would know that his people regularly feed him with information on raging issues of the day, including viral social media posts that cost the job of one official who suggested that Vice President Leni Robredo be charged for working alongside the government amid the coronavirus disease 2019 pandemic.

They are attuned to current affairs, thus Duterte’s apparent silence over ABS-CBN when issues were coming out of the hearings was intriguing. The President was neutral on the issue, Roque would repeatedly say.

Voting 70-11, the House legislative franchises committee rejected a bill granting ABS-CBN a fresh 25-year franchise on July 10, drawing outrage from those who saw it as an attack on press freedom, and putting the network’s more than 11,000 employees at risk of losing their jobs.

On Tuesday, July 14, government-run television stations aired a speech of the President before soldiers in Jolo, Sulu on Monday, July 13. In his speech, he lambasted the “oligarchs” and boasted about dismantling them without the need to declare martial law. 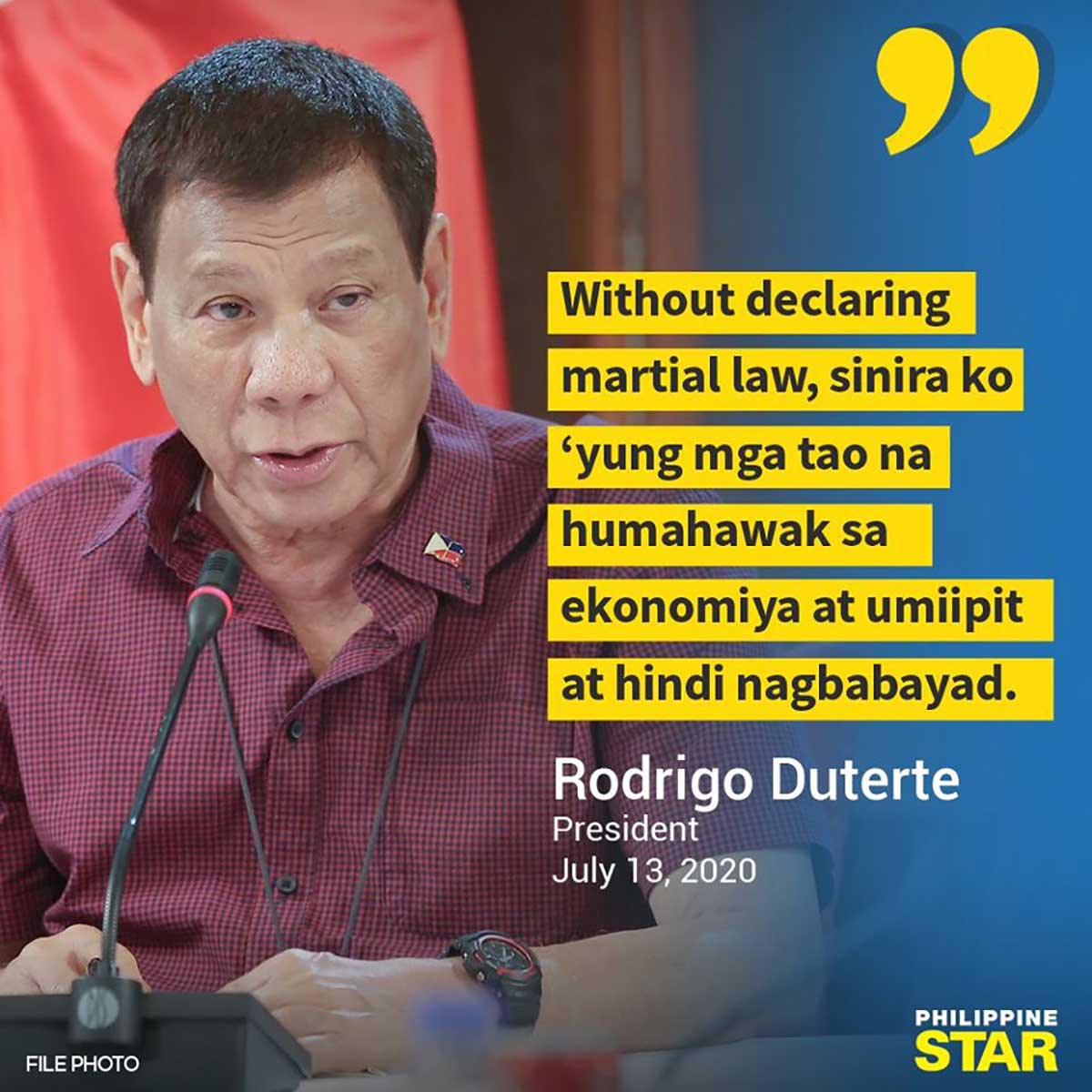 However, two news organizations reported that based on audio leaks, Duterte’s tirades against ABS-CBN were omitted from the speech that was aired, which left people guessing and asking about the context of the remarks on oligarchs.

Despite this, Roque maintained that the President was not referring to ABS-CBN when the Chief Executive hit the oligarchs.

Malacañang has refused to release the full video or transcript of Duterte’s speech in Jolo. Roque, who returned as presidential spokesman just a few months ago, laughed off his new title conferred by critics – “Master of Spin.”

“I don’t know why. Because I will not comment on an alleged transcript that I do not have any personal knowledge of? I waived the option of going with the President to Jolo on that day with my duties as a spokesperson to conduct my regular press briefings, and I could not do both,” Roque said.

Roque distanced himself from Malacañang’s move not to air the speech live or release the full video, explaining that he has no personal knowledge about the Jolo visit since he was not part of the President’s entourage.

Decision of the people?

The President has often lambasted ABS-CBN for not airing his campaign advertisements during the 2016 elections, so critics do not believe his supposedly neutral stance on the franchise controversy. This is not the only Palace claim slammed by critics.

On Saturday, July 11, or a day after the House committee on legislative franchises voted on the ABS-CBN bill, the Social Weather Stations Inc. (SWS) released a survey showing that 75 percent of Filipinos were in favor of renewing ABS-CBN’s franchise. Roque said the House panel’s refusal to grant the network a license was a “decision of the people.”

Roque, who used to host a program in ABS-CBN’s radio station dzMM, explained that the members of the committee – composed of both congressional district and party-list lawmakers – represent the people.

The SWS survey conducted from July 3 to 6 found that three in every four Filipinos believed that Congress should renew ABS-CBN’s franchise.  A majority or 56 percent of the respondents, meanwhile, believe that the rejection of the franchise is a major blow to press freedom.

In a report detailing the poll results, SWS noted that ABS-CBN is highly trusted by Filipinos based on previous surveys. Of the 11 surveys from October 2000 to December 2018, net trust in ABS-CBN was “excellent” in six and “very good” in five, the pollster said. The July survey was a probability-based poll conducted using mobile phone and computer-assisted telephone interviews of 1,555 adult Filipinos nationwide.

Despite the survey results, Roque is standing by his statement that the House panel’s decision reflected the sentiments of the people.

“In our Constitution, we have a representative democracy. Our democracy lies with the elected representatives of the people,” Roque said in a virtual press briefing on Monday, July 13. “So what I said previously was right, because it was based on what is stated in the Constitution.”

“The representatives will be judged on election day,” he added.

Roque said the public should just respect the decision of the House panel and move on from the issue. “We regret it, too, but the boxing is over and it already underwent the processes provided under the Constitution. We can’t do anything anymore.”

‘History will be the judge’

Supporters of ABS-CBN refused to heed Roque’s call and warned that history would judge Duterte, House Speaker Alan Cayetano, and the 70 lawmakers who voted against the renewal of the network’s franchise.

The rejection of the franchise was greeted by protests and statements of condemnation by academic institutions, journalists, and cause-oriented groups who believe that ABS-CBN’s shutdown signals dark days ahead for the Philippine media.

A statement signed by more than 1,000 Philippine journalists and media workers accused the House panel of allowing itself to be a “pawn for carrying out a personal vendetta.”

“History will surely be cruel to the lawmakers who voted against the franchise renewal of a network that was last shut down during the Marcos dictatorship,” the media practitioners said.

“Victory came easy for the forces that conspired to bring down ABS-CBN. But the rehabilitation of the image of those condemned by history won’t, as it will be fraught with the collective wrath of a people who live by democracy and the rule of law,” they added. 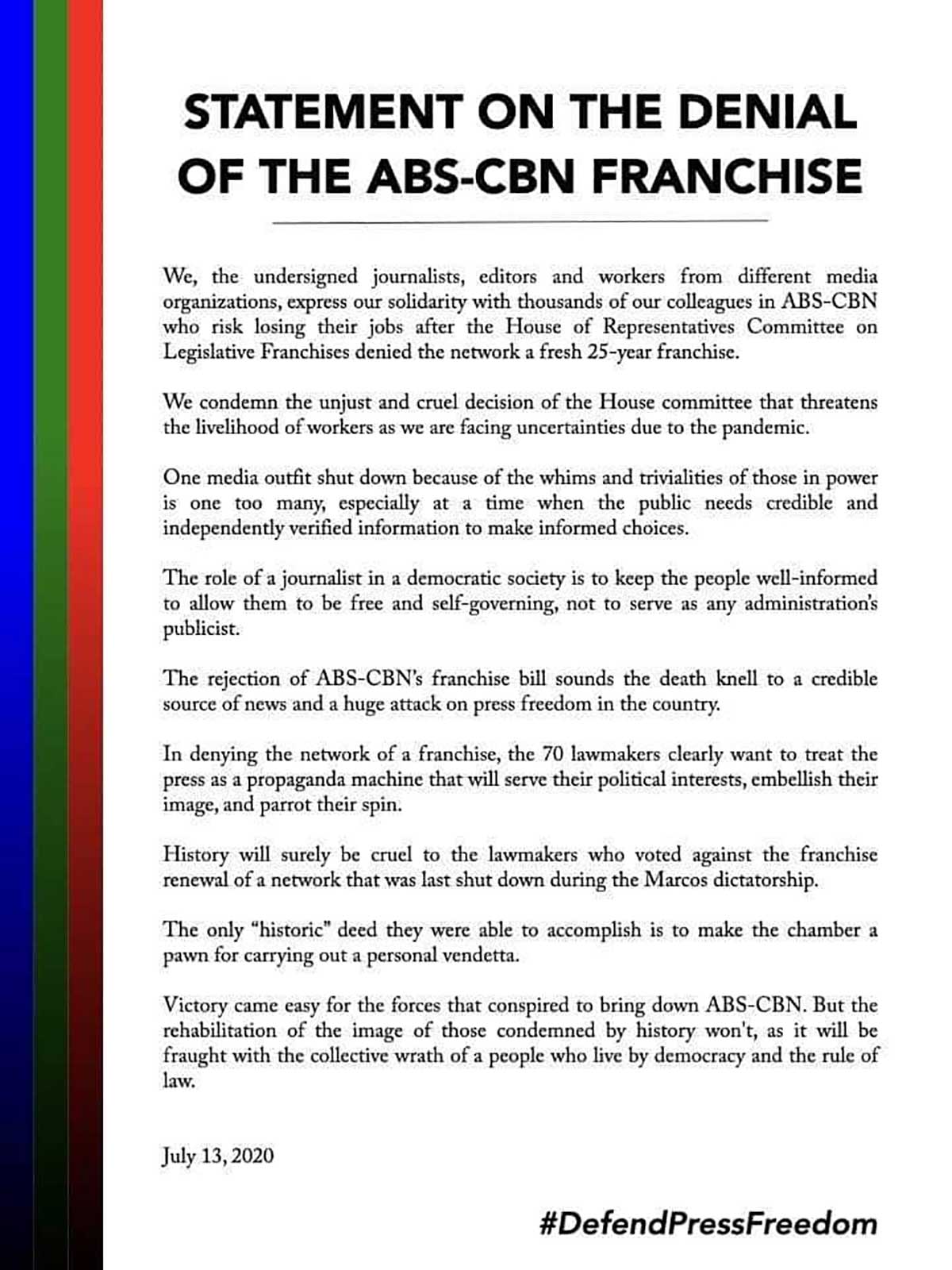 The media workers said the rejection of ABS-CBN’s franchise bill “sounds the death knell to a credible source of news and (is) a huge attack on press freedom in the country.”

“In denying the network of a franchise, the 70 lawmakers clearly want to treat the press as a propaganda machine that will serve their political interests, embellish their image, and parrot their spin,” they said.

The Defense Press Corps, a group of reporters covering national security issues, said the House of Representatives resembles “a house of minions” and those who seek to silence truth-tellers are complicit in letting tyranny reign.

A statement by the University of Santo Tomas communication and media studies department commended the 11 lawmakers who voted in favor of a franchise for ABS-CBN and for standing up to the “70 who toed the partisan line, betrayed the people they claim to represent, and allowed” Cayetano to deliver on Duterte’s “repeated threats to put the TV network out of business.”

Roque, however, maintained that Duterte’s public threats against ABS-CBN had no impact on the network’s franchise bid. “The President is a forgiving person. He has forgiven ABS-CBN publicly,” Roque said.

“The people know that, especially those who are from Davao who were with him when he was mayor. If the President gets angry, he does not hold a grudge. He forgives. But despite that, Congress decided that way so let’s just respect it,” Roque added.

The Palace spokesman also disagreed with observations that the refusal to renew ABS-CBN’s franchise is similar to the closure of the network during the Marcos dictatorship as Robredo pointed ou.

“We know what happened during martial law. There was a franchise but it was shuttered. What happened now was the franchise expired and it was not renewed,” Roque said.

Roque also brushed aside claims that ABS-CBN’s shutdown would have a chilling effect on the media, saying the network’s core business is entertainment, not news. With regard to the ABS-CBN workers who may lose their jobs, Roque said the government has existing programs to help them start businesses.

“We are sad that it has reached this point and the franchise was not renewed, but I think there was enough time to prepare for this,” Roque said. “Do not worry, the President is here, he will spend government funds until the last centavo for your benefit.”

“The benefits and opportunities given to those who lost jobs because of COVID-19 (coronavirus disease 2019), we will also extend to ABS-CBN workers who lost jobs,” he added. 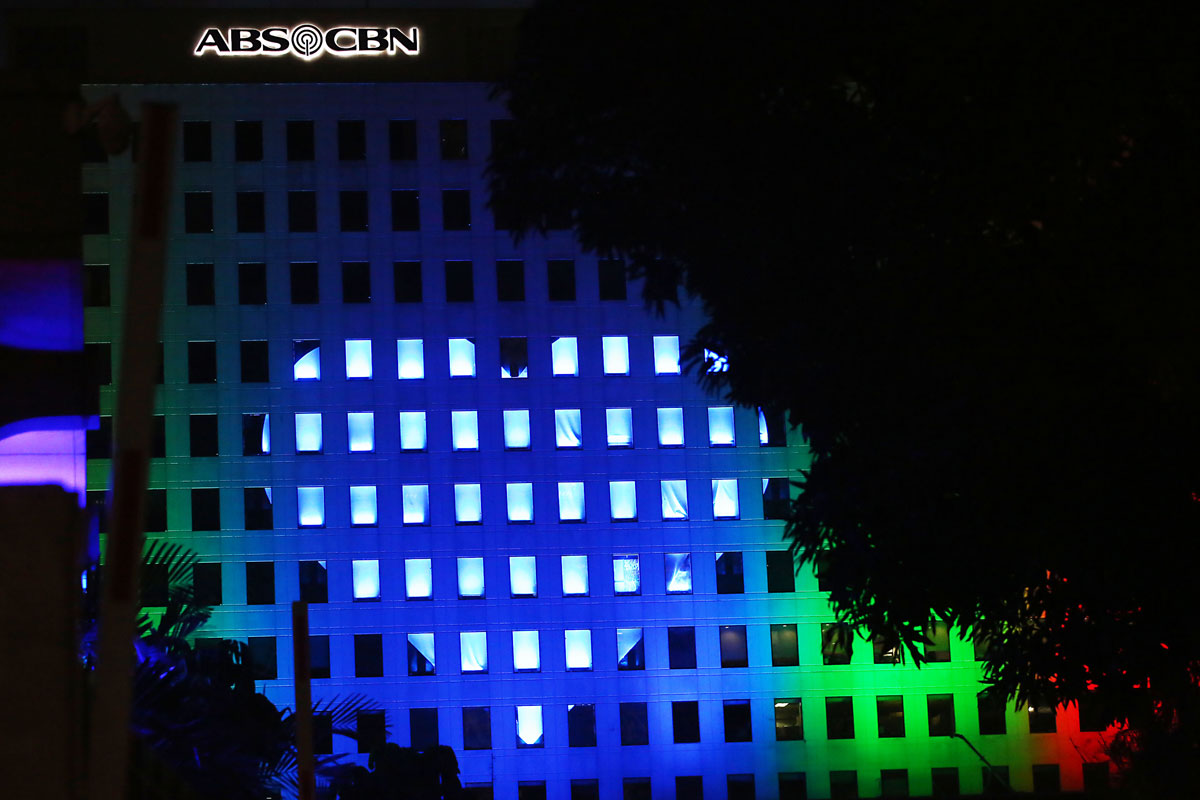 Administration critics believe that the public will not forget how Duterte’s allies in Congress brought down the network.

“This is not yet over because people will push back,” Robredo said on Sunday, July 12. “People can be made to believe some time, but not all the time. People know the truth and the truth will come out in the end.”

Albay Rep. Edcel Lagman expressed belief that the President confirmed in his speech in Jolo that he had a hand in the rejection of ABS-CBN’s franchise application.

“Speaker Alan Peter Cayetano parrots his patron when he claimed that the demise of ABS-CBN is a triumph over the oligarchy. The dismal denial of ABS-CBN’s bid for a new franchise was pursuant to a personal and partisan agenda completely devoid of any ideological or doctrinal shift,” Lagman declared in a statement.

Lagman, one of the proponents of the network’s franchise renewal, said it is only accidental that ABS-CBN represents big business.

“The evidence during the hearings showed that ABS-CBN has employed thousands of workers who supported its failed franchise renewal, has complied with its corporate responsibility, has rendered admirable public service through the years both in normal and critical times, and has gained the enduring patronage of Filipinos,” he pointed out.

Lagman argued that Duterte’s claim that he has dismantled the “bedrock of oligarchy” was “a farce because the fact is he has barely scraped the surface of what he believes is oligarchy.”

The lawmaker said Duterte erred in automatically equating “big business” with “oligarchy” when there are essential differences between the two.

Lagman explained that “big business” refers to large business and financial organizations that invest to help the government achieve economic development, while at the same time ensuring a return on their investments, while an oligarchy perpetuates itself to capture and run government through chosen proxies. “Oligarchy,” Lagman pointed out, literally means the “rule of the few” who control political and economic power by dictating government policies.

Albay 2nd District Rep. Joey Salceda expressed belief that the rejection of ABS-CBN’s franchise can be traced back to the 2016 elections.

“In the 2016 presidential elections, candidate Duterte was not handpicked by big (business) or by the so-called oligarchy… (but achieved a) landslide victory because the voters did not mind his parochial credentials and believed his populist propaganda,” Salceda said.