Damage Control? Phl Seeks ‘Chance’ To Look Into Drug War Deaths On Its Own

The Department of Justice tells the United Nations Human Rights Council that it will investigate the deaths related to the drug war, among other allegations. But critics consider this as a ploy to counter damning reports against the Philippines. 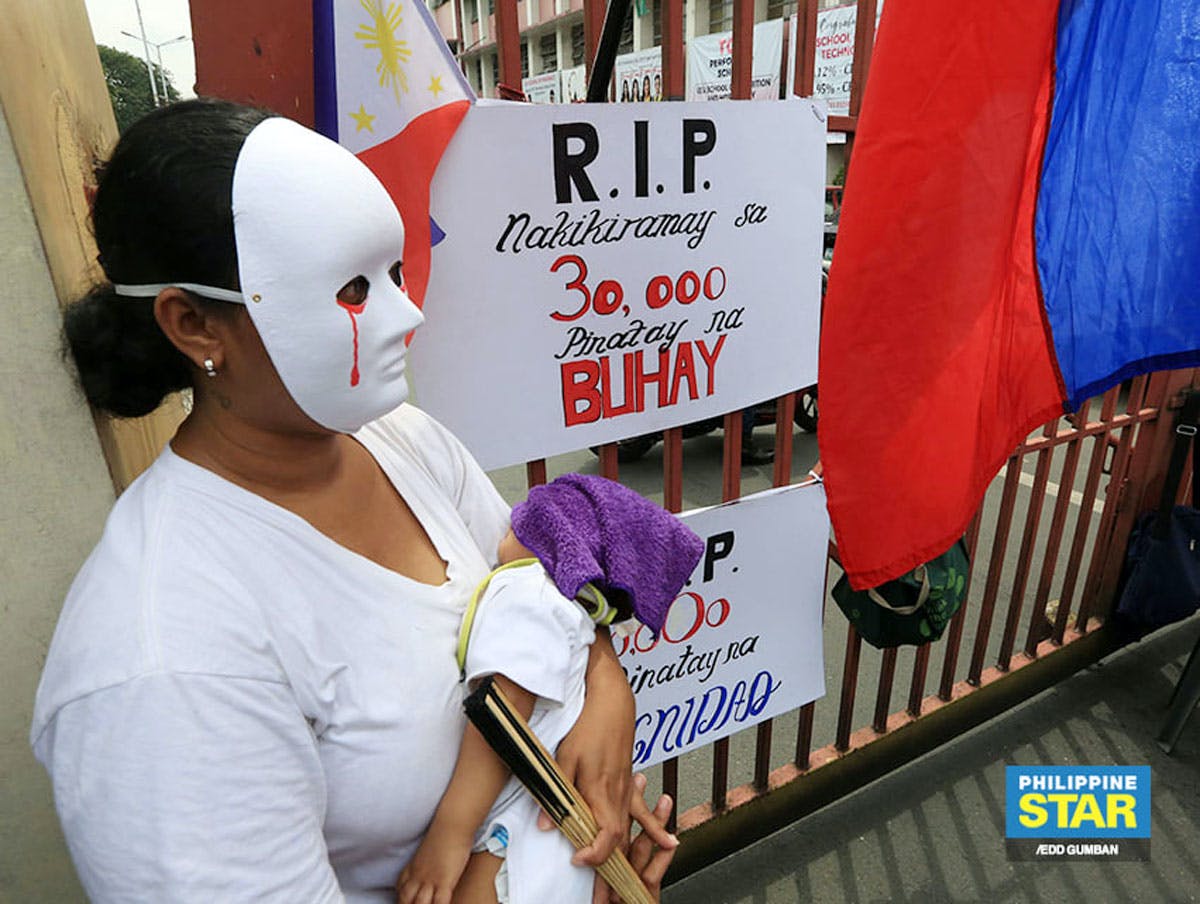 A woman joins other relatives of some of the people killed in the drug war in a prayer rally in Mendiola, Manila on Oct. 30, 2019. Photo by Edd Gumban, The Philippine STAR

Four years into the government’s so-called war against illegal drugs, the Duterte administration is moving to address concerns over the thousands of deaths involving suspects who allegedly fought back during police operations.

During the United Nations Human Rights Council (UNHRC) 44th session in Geneva on June 30, Justice Secretary Menardo Guevarra announced the creation of an interagency panel that would review over 5,600 police anti-drug operations since 2016 wherein deaths occurred.

The review mechanism, according to Guevarra, would reinforce accountability in the drug campaign and tighten what he described as the “web of existing mechanisms” to prevent cases of impunity.

The creation of the panel was announced during the enhanced interactive dialogue of the UNHRC on the human rights situation in the Philippines.

During the session, UN High Commissioner for Human Rights Michelle Bachelet presented the findings of her office’s investigation on the alleged human rights violations in the country.

“The findings of the report are very serious,” Bachelet told the 47-member council, in which the Philippines is currently serving its fifth term.

“Laws and policies to counter national security threats and illegal drugs have been crafted and implemented in ways that severely impacted human rights. They have resulted in thousands of killings, arbitrary detentions and the vilification of those who challenge these severe human rights violations,” she said.

The human rights report was mandated by a resolution initiated by Iceland, which passed by a slim margin at the council last year.

Bachelet, a former president of Chile, said the campaign against illegal drugs in the Philippines has been carried out without due regard for the rule of law, due process and the human rights of people who may be using or selling illegal drugs.

“The report finds that the killings have been widespread and systematic and that they are ongoing. We also found near total impunity indicating unwillingness by the state to hold to account perpetrators of extrajudicial killings,” Bachelet said.

“Moreover, by senior government officials’ own admission, the draconian campaign has been ineffective in reducing the supply of illegal drugs,” she added. 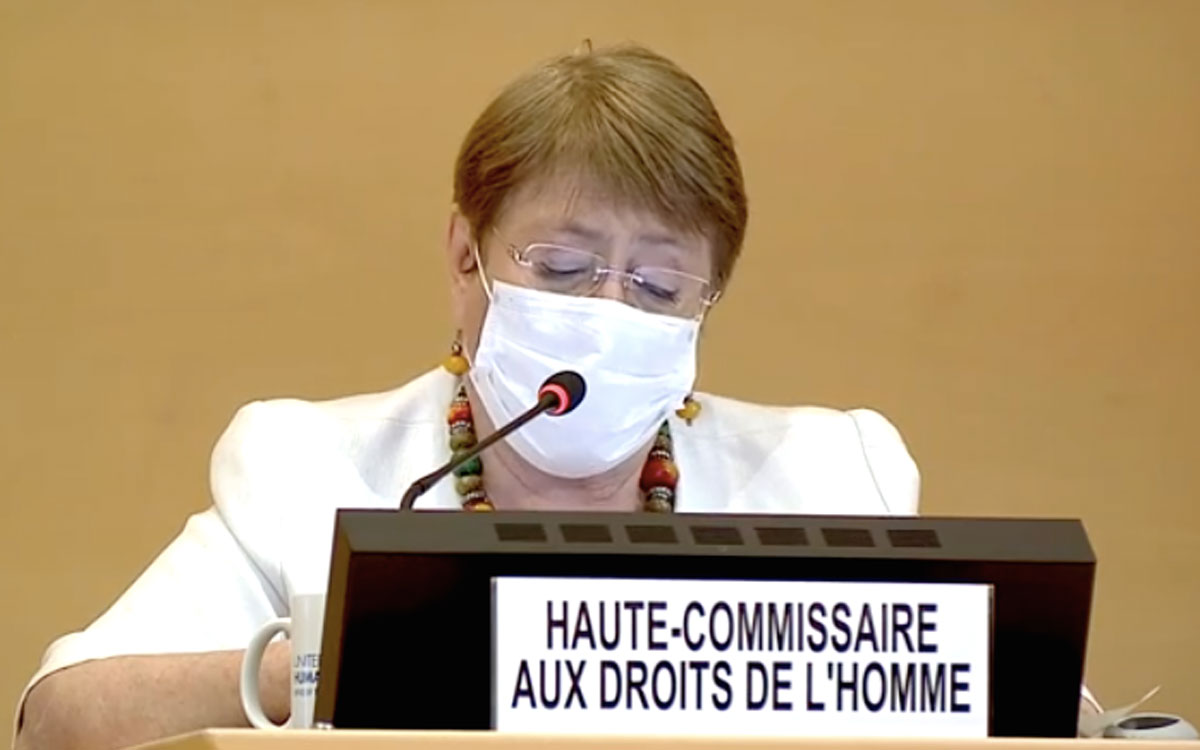 The Philippine government rejected the findings of the report.

Insisting that there is no reasonable basis to allege impunity or lack of accountability for human rights violations, Guevarra said an assessment of the human rights situation in the Philippines can only be credible when it is properly informed by context on the ground.

The Office of the High Commissioner for Human Rights (OHCHR) was not given permission to visit the country, although it engaged with Philippine government officials in various correspondence and meetings in Bangkok.

Despite rejecting allegations of impunity, Guevarra nevertheless announced the landmark move to review the so-called nanlaban cases or the drug personalities who were killed for supposedly fighting back during police operations.

Guevarra said the panel, which would present its report in November, intends to engage affected families and provide them with legal options and assistance in the criminal prosecution of law enforcers who have overstepped legal bounds in their operations.

“This review panel, external to the Philippine National Police, reevaluates these cases and examines the propriety of reinvestigating them or filing appropriate charges against erring law enforcement personnel,” Guevarra said. 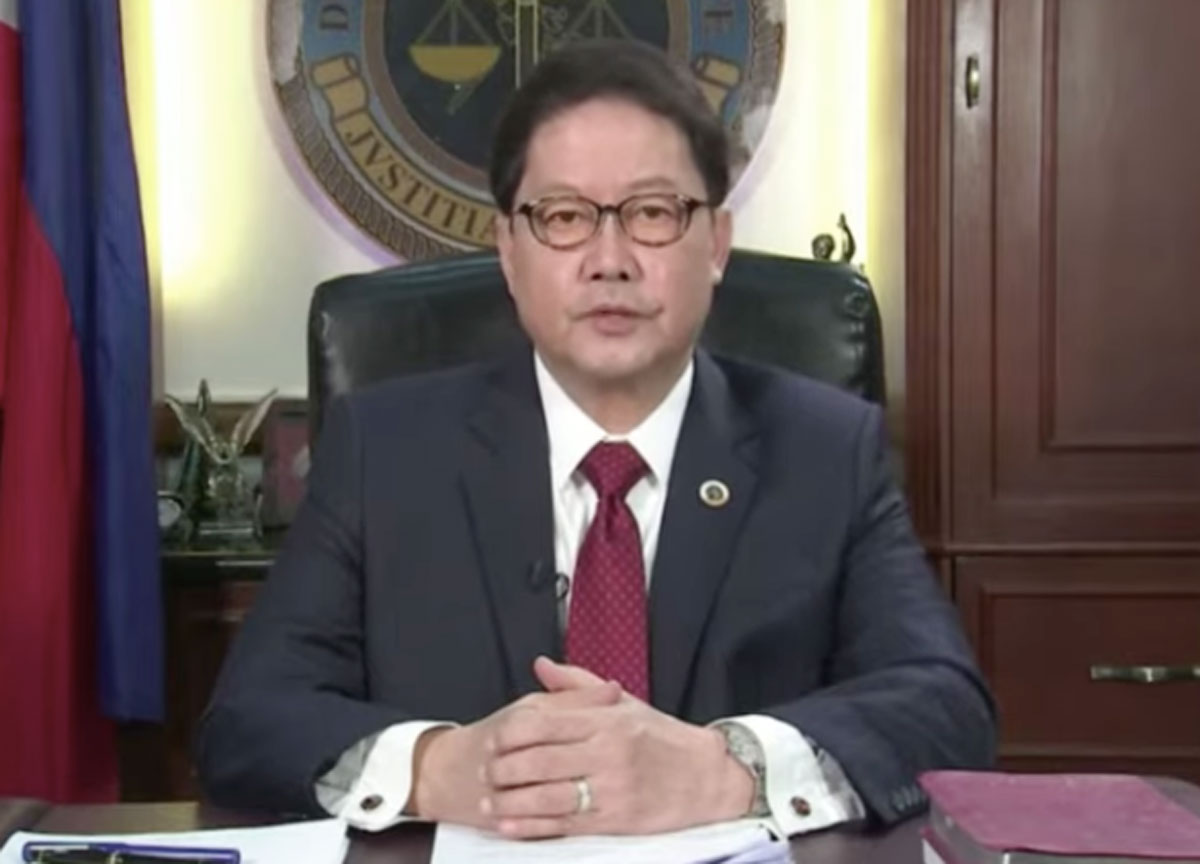 Bachelet welcomed the announcement, expressing hope that it would “kickstart the process that will begin to unblock the many obstacles in the system for accountability for the serious human rights violations in the Philippines.”

She reiterated her call for an independent and impartial criminal investigation on the human rights violations in the country.

Officials of the Duterte government have considered criticisms against its drug war and other policies as an affront to the country’s sovereignty, even if the Philippines is a member of the UN that includes Bachelet’s office, which is mandated to look into human rights situations in member-countries.For Human Rights Watch, the panel created by the DOJ is deeply flawed, noting that it involves agencies directly implicated in the drug war.

The HRW said the panel review to be evaluated and finalized by other government agencies involved in the anti-drug campaign is nothing more than a “ruse” to shield the country from international scrutiny.

Human rights group Karapatan also described the panel as a deception tactic to evade the International Criminal Court (ICC), which is wrapping up its preliminary examination on the situation in the Philippines.

“Had the Duterte government been actually sincere in holding itself accountable through domestic mechanisms, it would have already done so long ago,” Karapatan secretary general Cristina Palabay said.

“But the DOJ panel looks more like a deception tactic to preempt and evade any concrete investigation from international bodies such as the United Nations human rights mechanisms and the ICC than an actual avenue to exact accountability,” she added.

Palabay noted how task forces and commissions created in previous administrations failed to deliver justice and accountability on killings and other human rights violations.

“These were used as tools for whitewashing instead of rendering and establishing justice and accountability,” she added.

Given the situation, the Ecumenical Voice for Human Rights and Peace in the Philippines (EcuVoice) said it could not help but be reasonably cynical of the statements of the Philippine government, including the creation of the panel.

“The pledges and comments though now delivered in more sober and studied tones appear to be damage control to save its international reputation, preempt any further concrete and decisive international opportunities or mechanisms for accountability, and to provide the environment to wreak more damage on the Filipino people in its draconian solutions to the drug menace, rampant criminality, pandemic catastrophe and the supposed threat of terrorism,” the group pointed out.

“We reiterate our call for an independent investigation mechanism of the UN Human Rights Council to look into the human rights situation in the Philippines, as among the options for international accountability measures recommended by Ms. Bachelet,” it said. 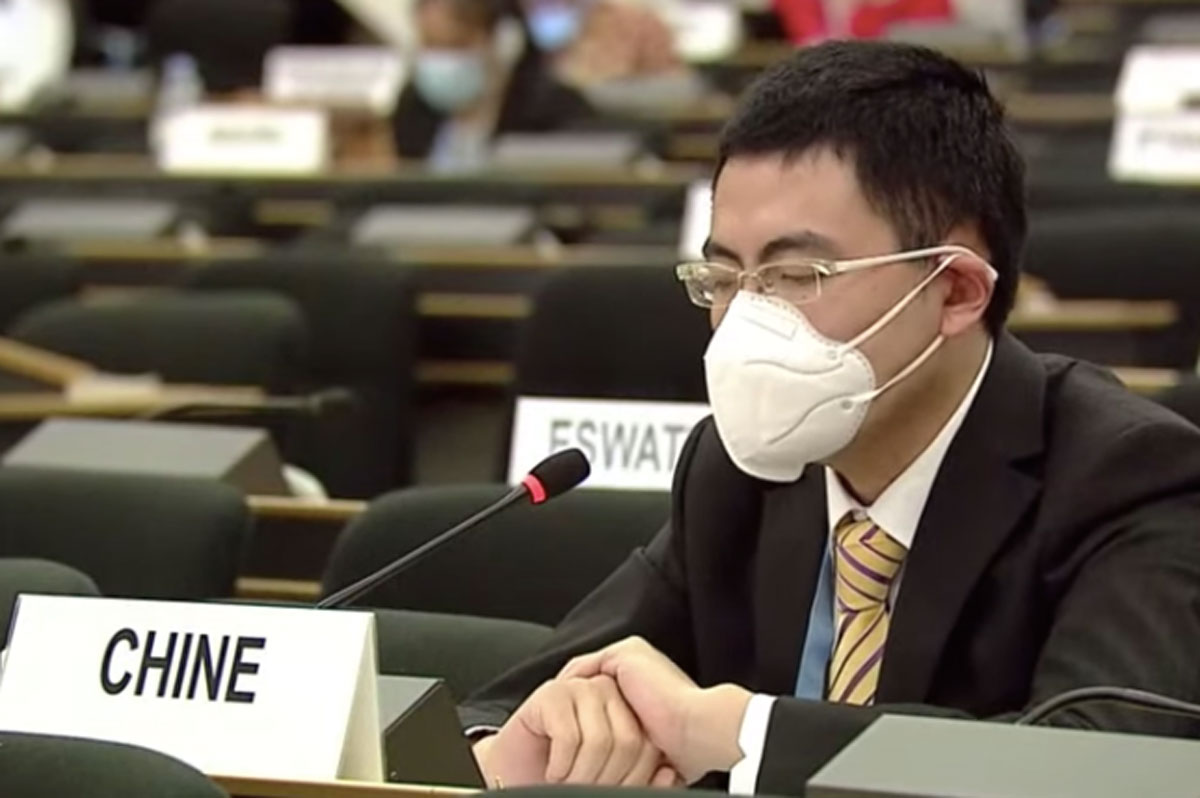 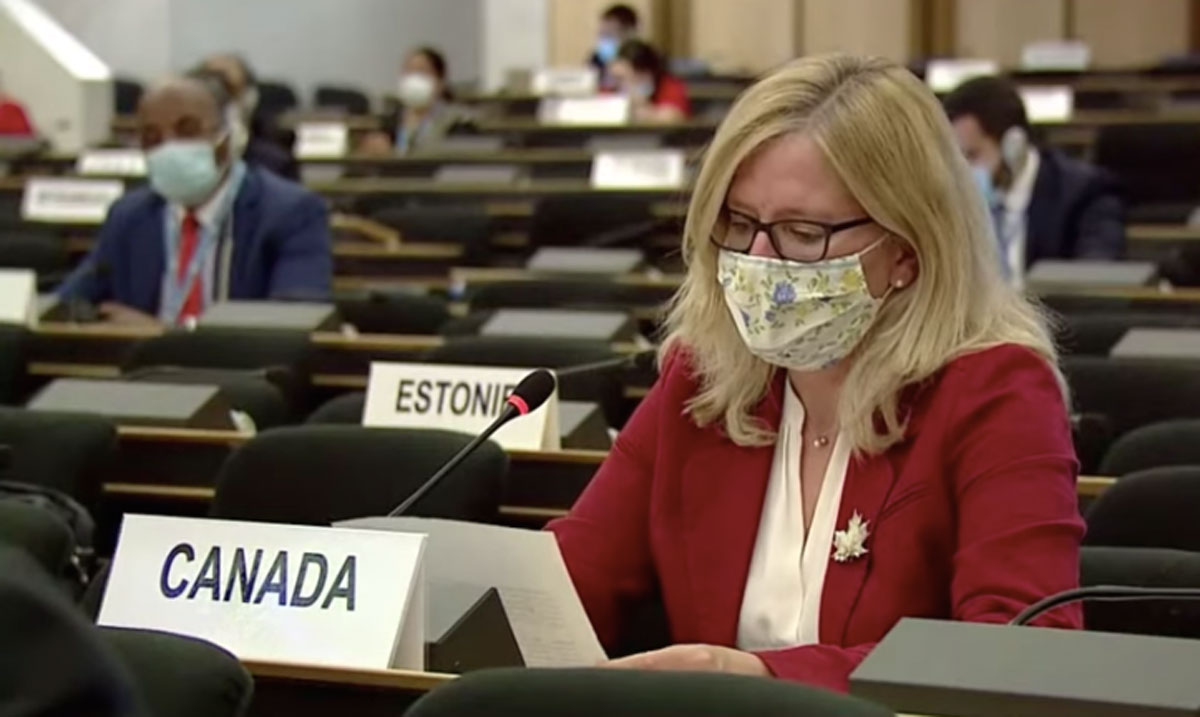 The Philippine Commission on Human Rights (CHR), which also took part in the UNHRC dialogue, said it is ready to collaborate with the government in conducting the review of the cases.

But CHR commissioner Karen Gomez-Dumpit urged the government to accept that the killings are widespread and systematic in order for the review to be credible.

“It must also not confine the coverage of this review to exclude other victims of the anti-drug campaign and must look beyond government’s own numbers,” Gomez-Dumpit stressed.

“It must demonstrate full transparency and cooperation with independent mechanisms including the Commission on Human Rights,” she said.

The CHR previously formed a task force to investigate killings in relation to the so-called war on drugs.

Despite previous assurances from the PNP leadership, the commission has repeatedly been denied full access to investigation reports of the killings.

In its statement to the UNHRC, the CHR emphasized the government’s continuing obligation to pursue social justice and uphold the dignity and human rights of all.

It cited the harmful rhetoric of inciting hatred, vilifying legitimate dissent and incentivizing violence that contributed to the present attitudes and behavior toward human rights.

“The overreliance on a strong arm approach has largely contributed to the pervading culture of impunity. To improve the human rights situation, the Philippines must change course guided by the human rights-based approach to democratic governance,” the CHR said.

Days before the UNHRC session, 30 special rapporteurs and other independent experts of the UN renewed their call for an on-the-ground independent and impartial investigation on the situation in the Philippines.

They said the OHCHR report confirmed their findings and warnings of widespread and systematic killings and arbitrary detention in the context of the war on drugs; killings and abuses targeting farmers and indigenous peoples; and the silencing of independent media, critics and the opposition.

“The report recognizes important efforts to improve the protection of economic and social rights and stresses that these efforts should be guided by a human rights-based approach and focused on ‘leaving no one behind.’ The report also finds, as we had, stark and persistent impunity,” the rapporteurs said in a joint statement on June 25.

Among those who signed was UN special rapporteur on extrajudicial, summary or arbitrary executions Agnès Callamard, whose request for an official visit to the country has been repeatedly denied by the Philippine government.

The UN experts said the response of the international community must set an example, with the report marking the “beginning of real accountability, redress for the victims and a definite end to the very serious violations committed.”

“The human rights situation in the Philippines has now reached a level of gravity requiring a robust intervention by the UN. The Human Rights Council must do everything in its power to prevent the continuation of widespread and systematic human rights abuses against the Philippines people,” they added.

‘Give it a chance’

On Thursday, July 2, Guevarra appealed to human rights and other groups not to pass judgment this early as the panel is just about to begin doing its task.

“It will be for everyone’s good to allow this inter-agency panel to do what it has set out to do, and reserve judgment at the proper time,” Guevarra said.

“This panel needs all the help that it can get, including from those who seek to discredit it much too early,” the justice chief added.