Backgrounder: Why The Killing Of Transgender Woman Jennifer Laude Drew Outrage In 2014

An investigation report said Jennifer Laude fell victim to a “crime of hatred.” 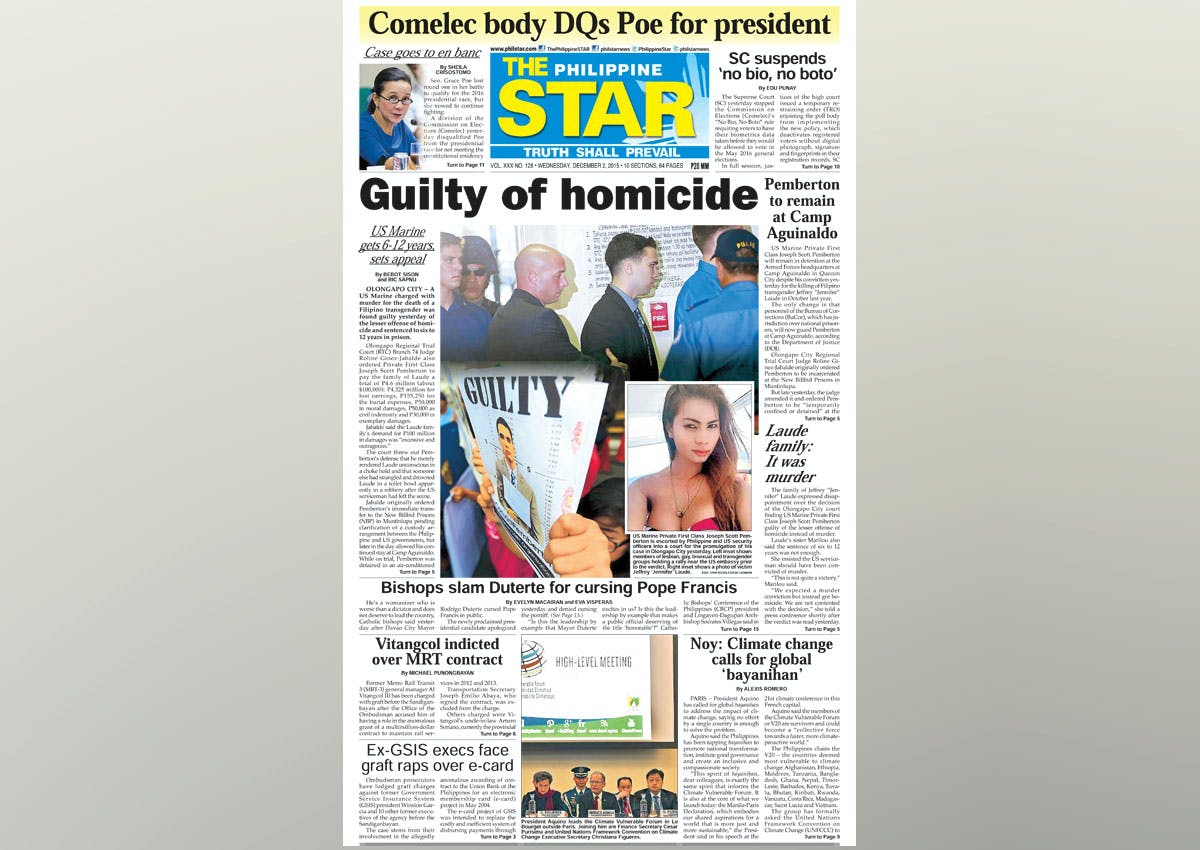 On Dec. 1, 2015, Olongapo City Regional Trial Court Branch 74 Judge Roline Ginez-Jabalde convicted US Marine Lance Corporal Joseph Scott Pemberton of the less serious crime of homicide for the killing of transgender woman Jennifer Laude, sentenced him to six to 12 years’ imprisonment and ordered him to pay Laude’s family a total of P4,605,250.

The death of transgender woman Jennifer Laude at the hands of a man who found out about her identity while having sex was gruesome and brutal enough to gain notoriety.

Laude, then 26 years old, was found dead in the bathroom of Celzone Lodge, naked with her head submerged in the toilet bowl and her slumped body suffering from hematoma (collection of blood), hemorrhage (bleeding) and contusions (black-and-blue bruises).

The region’s chief medico-legal officer Reynaldo Dave conducted the autopsy, concluded that she died due to “asphyxia by drowning,” and surmised that the toilet bowl was flushed to make her inhale water instead of air. A histopathological report by the Philippine Crime Laboratory Office in Camp Crame confirmed the cause of her death to be “asphyxia due to drowning and strangulation.”

A report prepared by investigator Senior Police Officer 3 Tyrone Tecson said she fell victim to a “crime of hatred.”

According to testimonies, Pemberton and three other servicemen were enjoying their free time at Ambyanz Nightlife at about 11:00 p.m, when Laude was said to have offered sex.

The two, together with Laude’s companion Barbie Gelviro (whose legal name is Mark Clarence), crossed the street to Celzone Lodge. Laude was the one who paid for the room, but she and Gelviro supposedly asked for P1,000 each from Pemberton. Gelviro said it was Laude who asked her to leave the room.

Pemberton testified that after Laude gave him oral sex twice, he reached for her crotch and felt “something weird.” He said that he pushed Laude off him in disgust. When Laude slapped him in the face so hard that his ear rang, Pemberton said he got angrier.

The bulky serviceman claimed that they started to exchange hits and punches. Then, he got his arm around the lanky transwoman’s neck and they fell on the bed.

When Pemberton realized Laude was no longer moving, he said he brought her to the shower to splash water on her. He said he found no running water, so he decided to drop her naked on the toilet floor and went back to the ship. But Pemberton denied dunking her head in the toilet bowl and insisted that she was still breathing when he left.

Contradicting this claim was the testimony of one of Pemberton’s companions, Lance Corporal Jairn Michael Rose, to whom the killer admitted that he “killed a he/she.”

Various groups condemned the incident at the time.

How the courts decided the case

Prosecutors were joined by private lawyers Virginia Suarez and Harry Roque, now the spokesperson of President Duterte who pardoned the killer on Monday, Sept. 7, and which ignited controversy once again. The government sought Pemberton’s conviction for murder, which is punishable by reclusion perpetua or imprisonment of up to 40 years.

Pemberton refused to enter a plea during his arraignment. Instead, he invoked self-defense or incomplete self-defense – effectively an admission of guilt, although his claim of being in danger at the hands of Laude was never proven. 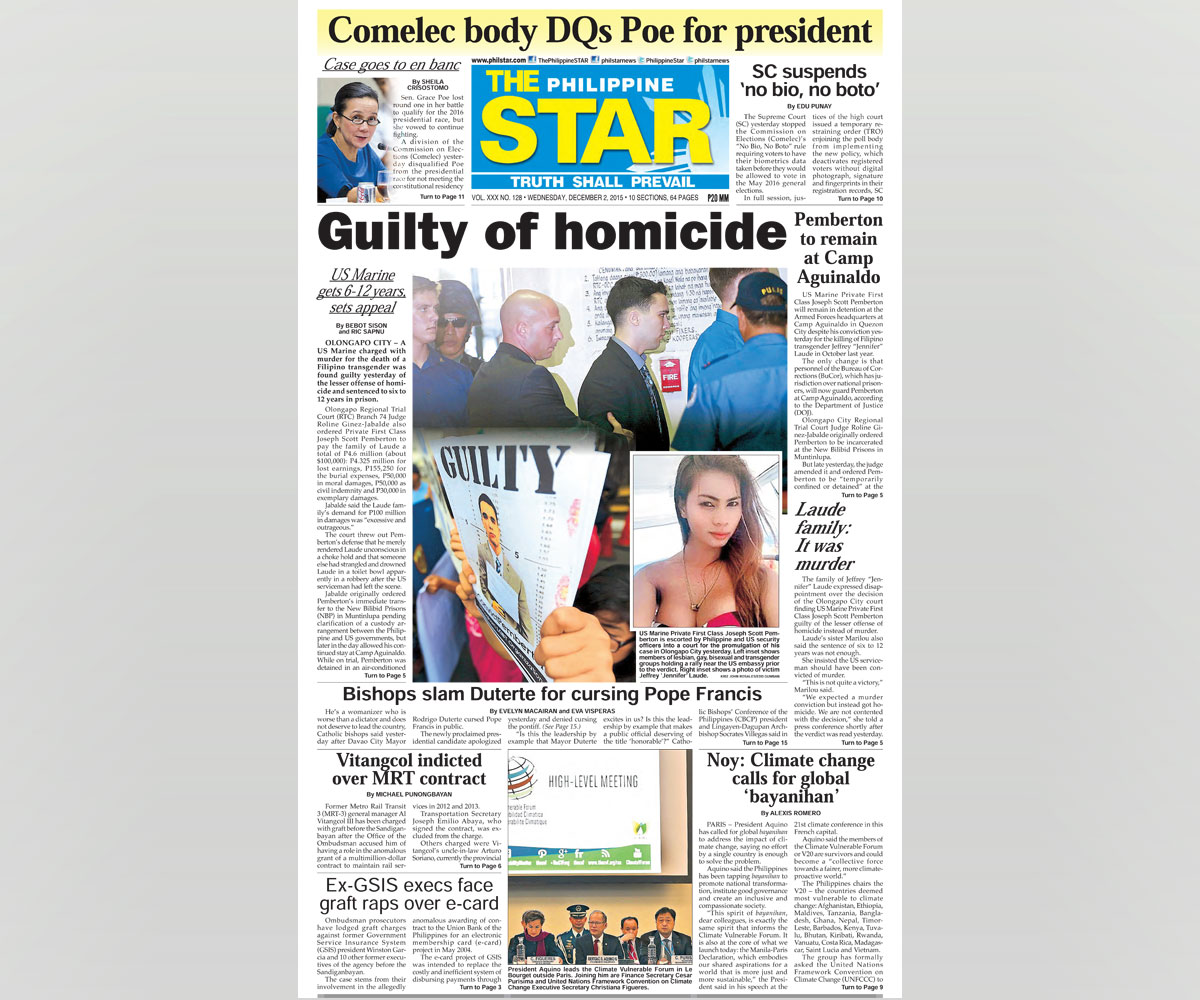 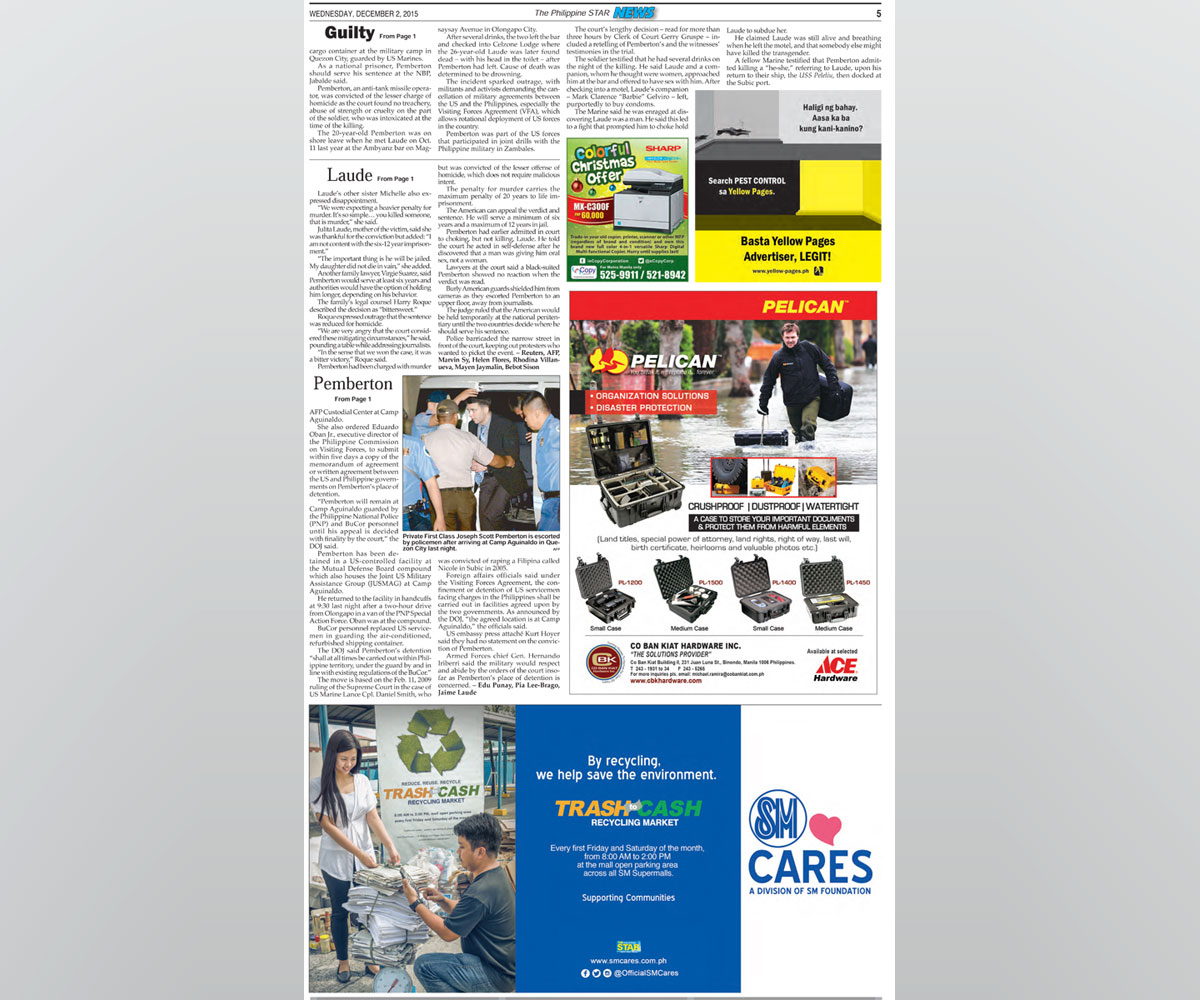 Just over a year later, Olongapo City Regional Trial Court (RTC) Branch 74 Judge Roline Ginez-Jabalde, in a Dec. 1, 2015 decision, convicted Pemberton of the less serious crime of homicide, sentenced him to six to 12 years’ imprisonment and ordered him to pay Laude’s family a total of P4,605,250.

The civil liability included P4.32 million for the lost earnings and P30,000 as exemplary damages meant to “serve as deterrent to all military and civilian personnel of the United States of America…to respect every Filipino citizen regardless of his/her sexual orientation.”

The trial court downgraded the crime, ruling that the prosecutors failed to establish the qualifying circumstances of treachery, abuse of superior strength and cruelty needed to mete out the heaviest penalty.

The court also made a pronouncement that outraged advocates of transgender rights: that Pemberton’s crime was “mitigated” by “passion and obfuscation,” as well as intoxication. It found that a drunk Pemberton killed Laude because he was “so enraged and incensed by Laude’s misrepresentation” that she was a woman.

Pemberton tried to appeal the decision and asked to be allowed to post bail while his conviction was not yet final. Jabalde, in a March 29, 2016 order, only reduced his maximum sentence to 10 years.

The Court of Appeals Special 16th  Division on Apr. 3, 2017 affirmed the RTC’s decision and even awarded an additional P50,000 in damages to Laude’s family. It denied Pemberton’s motion for reconsideration on Aug. 15, 2017 (almost three years after Laude’s death), prompting him to elevate the case to the SC.

The fight over Pemberton’s detention

While the criminal proceedings were ongoing, a dispute ensued regarding where Pemberton should be detained.

Laude’s German fiancé Marc Sueselbeck arrived in the Philippines following her death. When Pemberton was transferred to the air-conditioned Joint United States Military Advisory Group or JUSMAG facility, he and Laude’s sister Marilou climbed a perimeter fence in Camp Aguinaldo to demand to see the killer.

Roque was with Sueselbeck and Marilou at the time, and the Armed Forces of the Philippines on Nov. 4, 2014 filed a disbarment complaint against him for entering the restricted area. The Armed Forces of the Philippines (AFP) complaint has yet to be decided, but the Supreme Court on Feb. 15, 2017 dismissed Roque’s petition to cite the military officials in indirect contempt for publicizing their plans to file the administrative case.

On Dec. 19, 2014, the day of Pemberton’s arraignment before Jabalde’s sala, Marilou asked the court to direct the AFP to surrender the custody of Pemberton to the Olongapo City Jail. The judge denied the motion on Dec. 23, 2014 and Feb. 18, 2015.

Marilou and her sister Mesehilda then brought the case to the SC that April. They argued that Article 5, Paragraph (3)(b) of the Visiting Forces Agreement states that for crimes under the concurrent jurisdiction of the two countries, “Philippine authorities shall have the primary right to exercise jurisdiction over all offenses committed by United States personnel.”

On Nov. 24, 2015, days before Pemberton’s conviction, the SC dismissed the petition. It said the equal protection clause was not violated by his special accommodations because “there is a substantial basis for a different treatment of a member of a foreign military armed forces allowed to enter our territory and all other accused.”

It also said the Laude sisters failed to establish that the JUSMAG detention facility was under the “control, supervision and jurisdiction of American military authorities” since it was inside Camp Aguinaldo, the AFP’s general headquarters.