Pacquiao To Duterte: Do Not Buckle In Face Of China’s WPS Intrusions 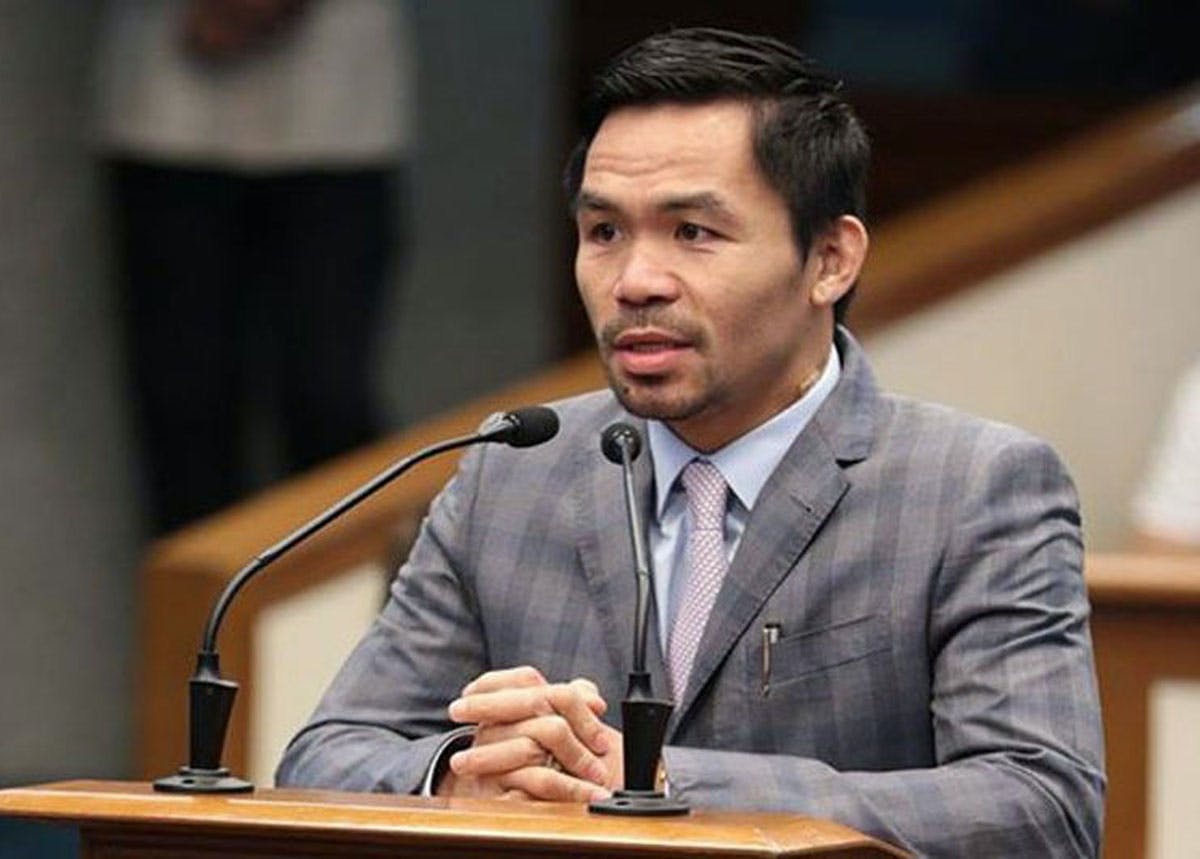 Sen. Manny Pacquiao urged President Duterte on Monday, May 3, not to “buckle” in the face of China’s repeated intrusions in the West Philippine Sea (WPS) as his apparently defeatist remarks could weaken the resolve of Filipinos to defend the country’s sovereign rights.

Pacquiao recalled that during his electoral campaign in 2016, Duterte vowed to ride a jet ski and plant the Philippine flag in the WPS to confront China’s intrusions that made him as well as many Filipinos vote for him.

“It (campaign promise) gave me and many others great encouragement and resolve that I said to myself: ‘this is what we need.’ But time came when he (Duterte) buckled when we need to make a stand,” Pacquiao told reporters in Filipino during an online press conference. 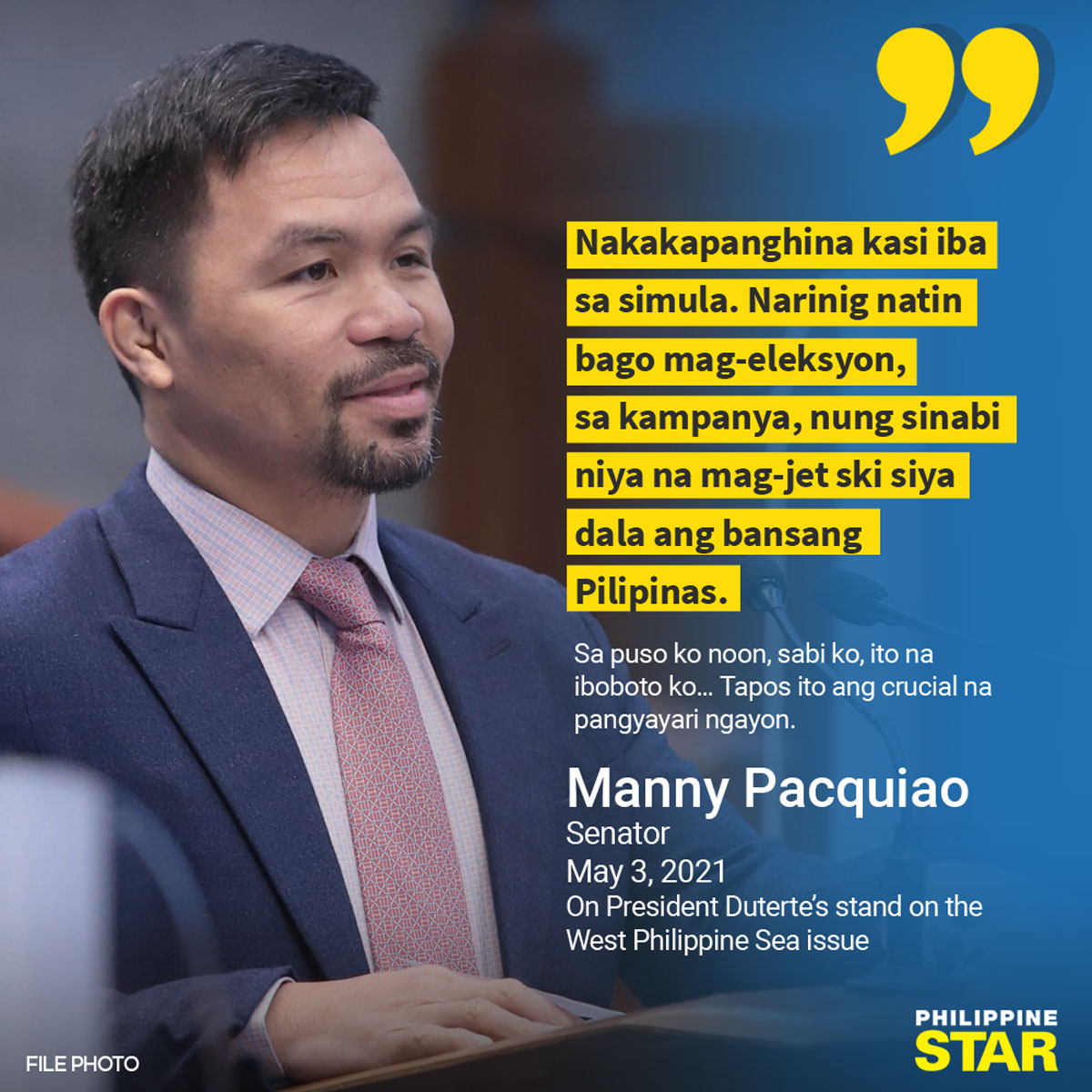 He said “millions of Filipinos starting from our ancestors” have fought, made sacrifices and died for the country’s freedom and territorial integrity, something Malacañang must always remember.

The senator likened China’s intrusions in the WPS to an intruder building some structures in one’s property.

He said he found Duterte’s stance “lacking” when the government must take measures that would make China respect the country.

“I understand our President has a lot of problems to deal with… but if our President softens, our resolve would weaken,” Pacquiao stressed.

“We want to be friends with China but they must respect our rights,” he declared.

Last April 10, Pacquiao wrote to Chinese Ambassador to the Philippines Huang Xilian expressing alarm over the presence of some 220 Chinese militia vessels in the WPS and asked that Beijing order their removal. 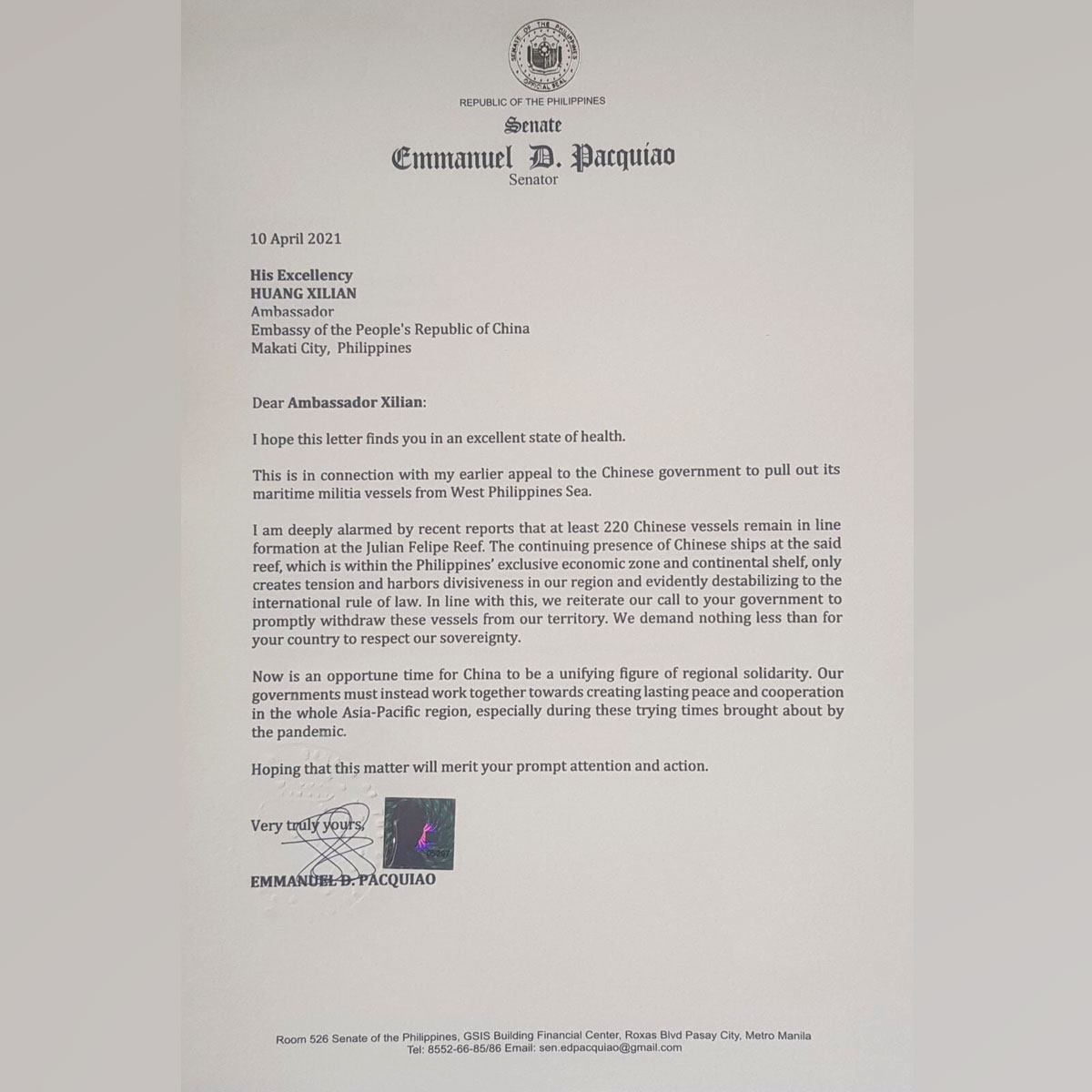 He said the Chinese government has yet to formally reply to his letter but disclosed that Huang sent a text message to Ron Munsayac, executive director and public information officer of PDP-Laban, expressing hope that ties between the two countries would remain amicable.

In his letter, Pacquiao noted “the continuing presence of Chinese ships at the said reef, which is within the Philippines’ exclusive economic zone and continental shelf, only creates tension and harbors divisiveness in our region and evidently destabilizing to the international rule of law.”

“In line with this, we reiterate our call to your government to promptly withdraw these vessels from our territory. We demand nothing less than for your country to respect our sovereignty,” he said.

The senator added instead of creating animosity with its neighbors, it should behave as a “unifying figure of regional solidarity.”

“Our governments must instead work together towards creating lasting peace and cooperation in the whole Asia-Pacific region, especially during these trying times brought about by the pandemic,” he stated.

Prior to his letter, Pacquiao had also issued an official statement urging China to pull out its militia fishing boats that have encroached in areas surrounding the Julian Felipe reef.

The letter was sent some 16 days before 11 senators, led by Senate Minority Leader Franklin Drilon, signed a resolution condemning the presence of  Chinese fishing vessels around the reef.

Pacquiao sought to dispel claims that he deliberately refused to sign Senate Resolution No. 708 expressing the sentiments of the Senate “condemning the activities of the People’s Republic of China in the exclusive economic zone of the Philippines and other parts of the West Philippine Sea.”

He said the communication was not immediately released to the media as it was his “personal letter” to Huang.

“Two weeks after, Senator Drilon passed a resolution of the same nature which I did not sign because I already had a letter pending before the Chinese Ambassador here," Pacquiao said.

Sen. Risa Hontiveros said the Philippines “has had enough” of the illegal Chinese activities in the WPS and that Beijing should “command its Chinese coast guard to leave Bajo de Masinloc, the Kalayaan Island Group, and all other areas of the WPS now” after it harassed and blocked the Coast Guard from conducting drills and patrols in the area.

She stressed the Philippine Coast Guard (PCG) has the absolute right to conduct maritime patrols and training exercises in the entire WPS.

“It is absolutely enraging that our Coast Guard is the one that is being blocked and challenged by China in our territory,” Hontiveros said in a statement.

She expressed support for the Department of Foreign Affairs in protesting the Chinese coast guard’s dangerous maneuvers and radio challenges to the country’s maritime authorities,  and for pushing back against the prolonged and illegal presence of Chinese vessels in our waters.

“But we must not stop at these diplomatic protests. We must look for other ways to make China pay not only for natural resources they destroyed, but also for the blatant violation of international law,” Hontiveros said.

“Excessive Chinese claims should be challenged, lest they become the norm. We should also send more ships to the WPS to show China how worthless, illegitimate, and unlawful her claims are. This is not the time to kowtow to the autocratic and hypocritical regime in Beijing. If we don't assert our rights under international law, we lose them,” she added.