The Philippines “has the severest degree of underreported infections” among the top five economies of ASEAN, according to a paper dated Aug. 18. This means people are spreading the disease unknowingly and are not getting the proper treatment. 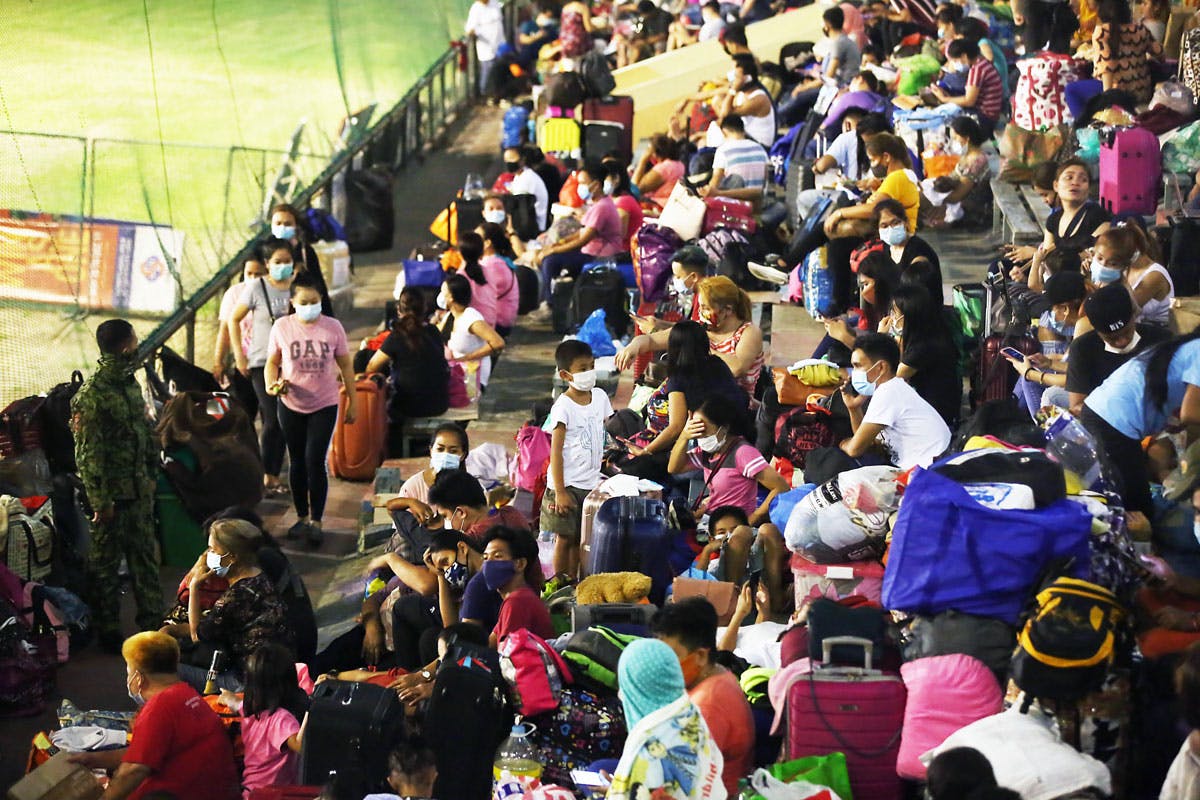 Thousands of locally stranded individuals, who are beneficiaries of the second batch of the Hatid Tulong program, spend the night on the bleachers of the Rizal Memorial Baseball Stadium in Manila on July 24, 2020 as a roving police officer reminds them of proper physical distancing to avoid coronavirus disease 2019 transmission. Photo by Miguel de Guzman, The Philippine STAR

Roughly three million Filipinos, or 2.6 percent of the national population, may have already been infected with the coronavirus disease 2019 (COVID-19) from April to June  as analysis showed that 96 to 99 percent of cases in the five largest economies of the Association of Southeast Asian Nations (ASEAN-5) during that period were undetected.

This was the finding of a working paper dated Aug. 18, authored by Jan Fredrick Cruz and released by the Ateneo de Manila University Department of Economics.

Cruz’s paper, titled “An Empirical Argument for Mass Testing: Crude Estimates of Unreported COVID19 Cases in the Philippines vis-à-vis Others in the ASEAN-5,” said statistical analysis showed that “49 out of every 50 COVID-19-positive persons in the Philippines have gone undetected during the second quarter of this year.”

Based on the author’s computation, the Philippines may have had 2,812,891 total cases from April to June, instead of the 34,354 official tally for that period. This means only 1.22 percent of cases were detected at the time.

Cruz computed these estimates by multiplying the number of reported cases with the ratio obtained by dividing the case fatality rate of a country against that of Singapore, the ASEAN-5 state with the lowest such rate.

He explained that the formula was derived from the likelihood that case fatality rates exclude people who did not undergo medical diagnosis because of immediate recovery or lack of serious symptoms.

Cruz also pointed out that while Indonesia may have more estimated cases than the Philippines, the former’s higher population leads to a higher likelihood of cases there. But discounting the population size “highlights the Philippines as the worst performer among the ASEAN-5 in controlling the spread of COVID-19,” despite being reported internationally to have imposed the longest and most stringent quarantine measures in the world, Cruz noted.

“Many Filipinos are plausibly unaware that they have COVID-19, and are likely exposing their household, immediate community, and workplace to risk of infection. The same set of Filipinos is not receiving the proper treatment because of the absence of diagnosis,” read the paper.

Cruz stressed that it was “impractical” to merely revert Metro Manila and surrounding provinces to modified enhanced community quarantine earlier this month, without “complementary mass testing.” He noted that the spread of the disease would just resume upon the lifting of the lockdown without mass testing.

“Once the quarantine is lifted, undetected COVID-19-positive persons will simply resuscitate viral transmission, voiding any previous progress,” read the paper.

Cruz noted that the Philippines finally overtook Indonesia as the ASEAN country with the highest tally of positive persons by the first week of August.

“It becomes more pressing now for the Philippine government to pursue mass testing,” the paper read. “In sum, the inevitable policy direction for the Philippines is to aggressively implement the WHO (World Health Organization) recommendation of ‘test, trace, and isolate’ to avoid long-term health and economic distress.” 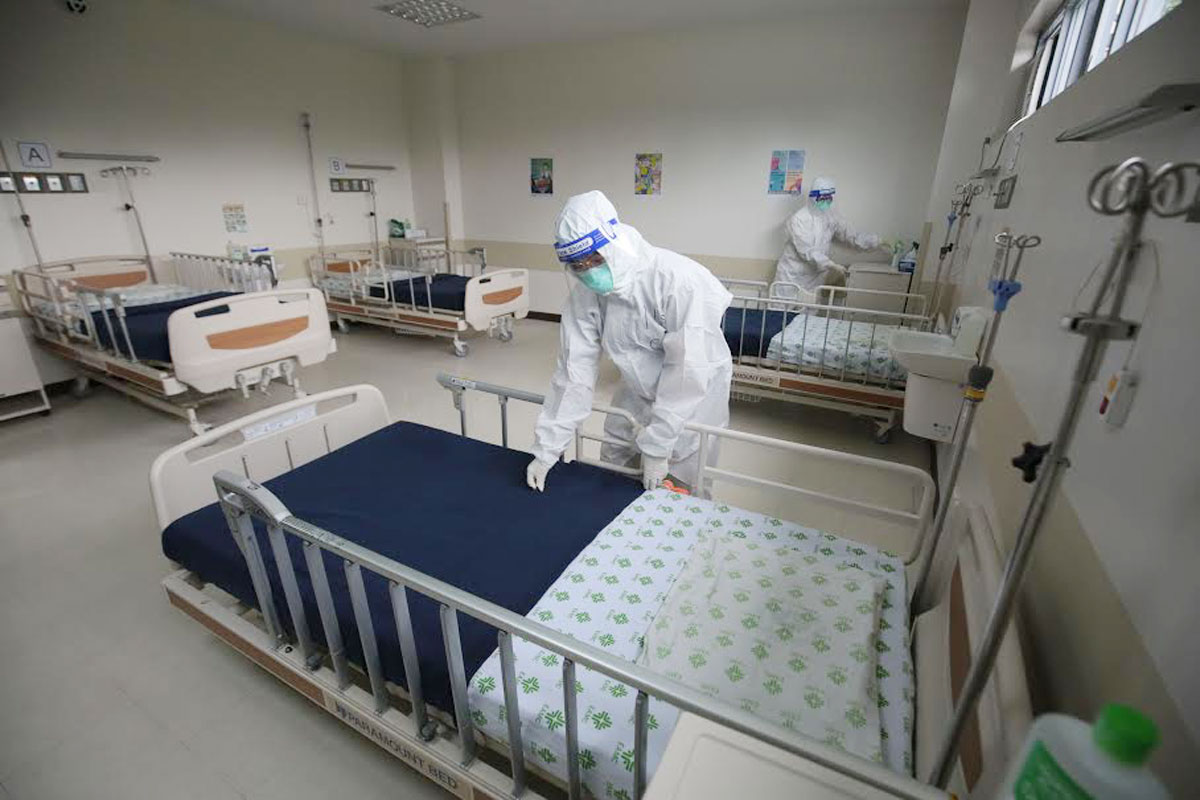 The paper noted that the country’s COVID-19 cases were “relatively low for a country with a population of 100 million,” which hints at a “likely underreporting of actual cases.” Poor data leads to an inaccurate assessment of the situation, which is “harmful to the Philippines on multiple levels,” it stated.

“Underreported statistics on the impact of viral transmission may reduce the urgency to act among public and private stakeholders and key decision-makers. Moreover, low detection rates undermine government efforts to formulate effective, comprehensive, and credible public health and economic policies. The conservative figures also create a false sense of complacency within the community with regards to the risk of viral transmission,” it stressed.

As a disclaimer, the paper clarified that it has not yet been published in a journal or vetted through a peer-review process.

“Whenever we ease out or de-escalate these restrictions we have, we expect that there will be higher cases, as what happened to us when we de-escalated to GCQ in the past,” DOH Undersecretary Maria Rosario Vergeire said in a television interview.

Vergeire, however, expressed hope that the “safeguards” set by the DOH have already been internalized by the public so that an increase in cases will not be repeated.

“We are setting safeguards so that we won't have the rise in cases again. Hopefully, these strategies will bear fruit and we will not have these high cases in the next couple of weeks,” she said.

The DOH has been calling on the public to strictly adhere to “minimum health standards” such as hand washing, physical distancing and wearing of masks.

The number of COVID-19 cases in the country may reach 230,000 by the end of August if Metro Manila and nearby provinces are reverted to GCQ, the OCTA Research team warned.

Nicanor Austriaco, visiting professor of biology at the University of Santo Tomas, said their team is proposing an additional two weeks of MECQ to reinforce the downward trend in the number of new cases.

“A two-week period is a single viral incubation time, so you give the community in Metro Manila an additional two weeks to allow the viruses to die without spreading to new patients,” Austriaco said in an interview with “The Chiefs” on One News/TV 5 on Monday, Aug. 17.

“A four-week period will lead to halving of the absolute cases,” he added.

University of the Philippines mathematics professor Guido David, also a member of the OCTA Research team, said the number of cases would be lower by as much as 20,000 if the MECQ is extended for another two weeks.

Austriaco pointed out that the danger of loosening up “without properly making sure that we will not repeat what we did before in the first GCQ is that these numbers will again begin to rise.”

“The disease is predictable. If you don’t change something, it will do what it did before,” he said.

While it appears that the new cases are still high, David said the trend is actually decreasing, noting that it would take two to four weeks before the impact of the two-week MECQ is manifested.

Guido also stressed the need to strengthen protocols, including in the implementation of granular lockdowns, isolation, border control, testing and contact tracing.

“If we have those, it would be a lot better than the last time,” he said.

Austriaco also welcomed the proposal not to use rapid antibody tests as basis for employees to go back to work, noting its low success rate that could have contributed to the spread of the disease on offices.

“We were sending sick workers to their jobs,” he said.

A proposal to require workers in some sectors to undergo regular real-time reverse transcription-polymerase chain reaction or RT-PCR swab testing instead of antibody tests, he said, “will make a significant difference if it is strategically and efficiently implemented.”

On the use of face shields, Austriaco said he has not seen a lot of studies showing that wearing them decreases the transmission of the virus.

He said most of the studies have focused on masks, which have been proven to be effective in reducing the transmission if the correct type is worn properly. 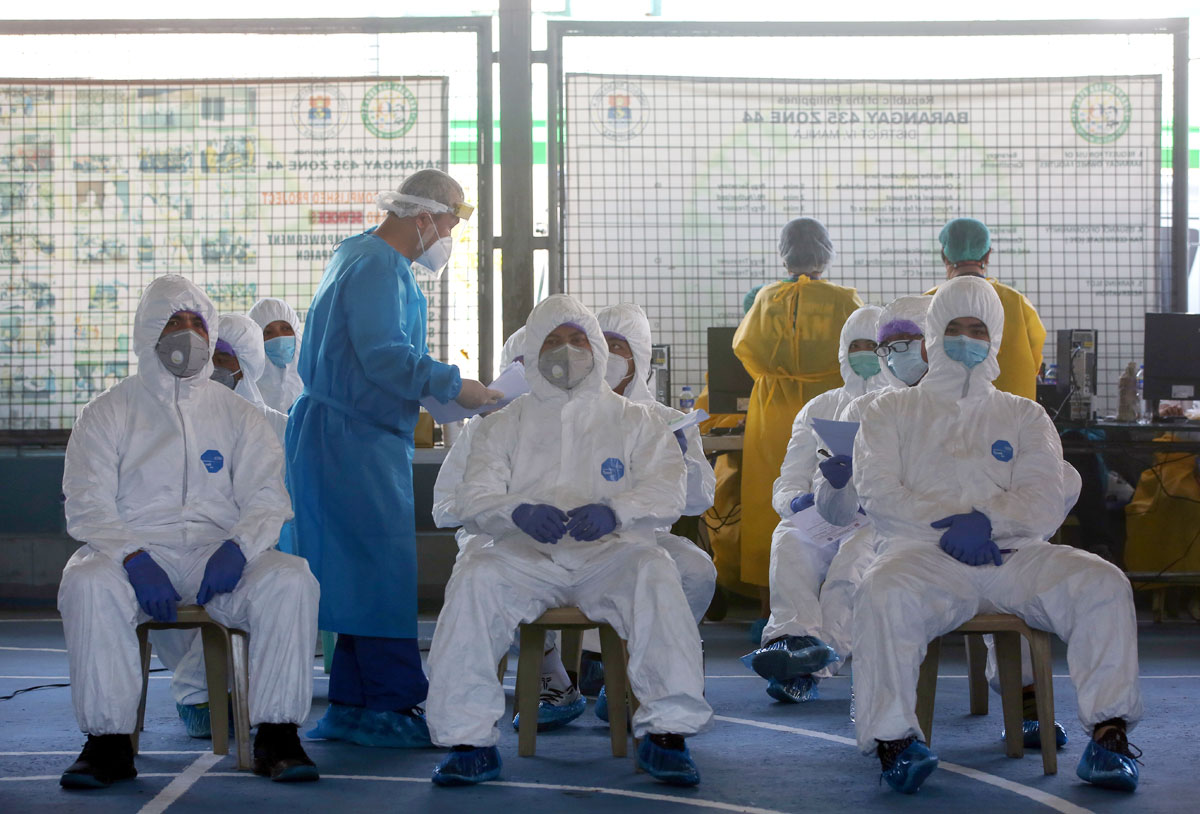 The enforcement of lockdowns and other pandemic-related measures at the local level is the “way forward” as imposing quarantine restrictions in entire regions may harm the economy and disrupt workers' livelihood, officials said on Tuesday, Aug. 18.

President Duterte agreed to ease lockdown measures in Metro Manila, Bulacan, Cavite, Laguna and Rizal to promote economic activity and allow employees to return to work, even as experts have recommended extending the partial lockdown for two weeks.

Officials said the government no longer has funds to help poor households and workers who will be affected by lockdowns.

Carlito Galvez Jr., chief implementer of the national policy to combat the COVID-19 pandemic, said placing regions under MECQ or partial lockdown would have a heavy impact on people’s livelihoods.

“We think that MECQ is not a sustainable strategy,” Galvez said in a press briefing. “The way forward is granular implementation of the lockdown, because if we are under MECQ, the collateral (damage) in the livelihood of our people would be huge.”

Galvez said the government was able to strengthen its pandemic response while Metro Manila and the four nearby provinces were under the two-week partial lockdown. He said local officials should have a greater role in implementing quarantine measures because they know the situation in their respective areas.

“If we will empower our LGUs (local government units), since they are the leaders in their area, they are the generals of the battlefront, if they lead the battle... the response would be easier to implement. The way forward really is the localization of the implementation of the National Action Plan,” Galvez said.

Galvez said mayors have been asking for autonomy in making decisions about precautionary measures because of the varying situations in each area.

“At the same time, they know what areas have spikes (in cases). So they are asking for a dialogue between the business sector and the LGU so that during the opening of our economy, they know what would happen,” he noted.

Presidential spokesman Harry Roque assured the public that agencies were able to increase the country’s bed capacities and number of health personnel during the two-week timeout. He said experts agree that the lockdown measures in Metro Manila and the four nearby provinces can be relaxed as long as health measures are strictly observed.

“We can continue with our livelihood, but of course the view of economic managers was also considered. They pointed out the 16.5 percent (economic) contraction and the allegedly 40 percent-plus unemployment. We really need to provide our people livelihood opportunities,” Roque said.

Speaking during the meeting of the Inter-Agency Task Force (IATF) for the Management of Emerging Infectious Diseases late Monday night, Duterte urged employers to conduct free swab RT-PCR testing for their workers, especially those who are vulnerable to the virus.

“It could be a private or public establishment or area. But the employers are highly encouraged to send their employees for testing at no cost to the employees,” Duterte said.

But he clarified that RT-PCR test is not required for employees with no coronavirus disease symptoms.

The President said the government must put a premium on the health of workers by conducting tests.

The IATF has also directed local governments to strictly implement measures aimed at containing the virus.

The task force, through Resolution No. 64 dated Aug. 17, called on local governments to undertake the following: