“Regardless of industry, you have to tech up or basically die…It is no longer just an option…We’ve seen that during the pandemic and we will see that in the coming years all the more pronounced,” series creator and host John Aguilar said. 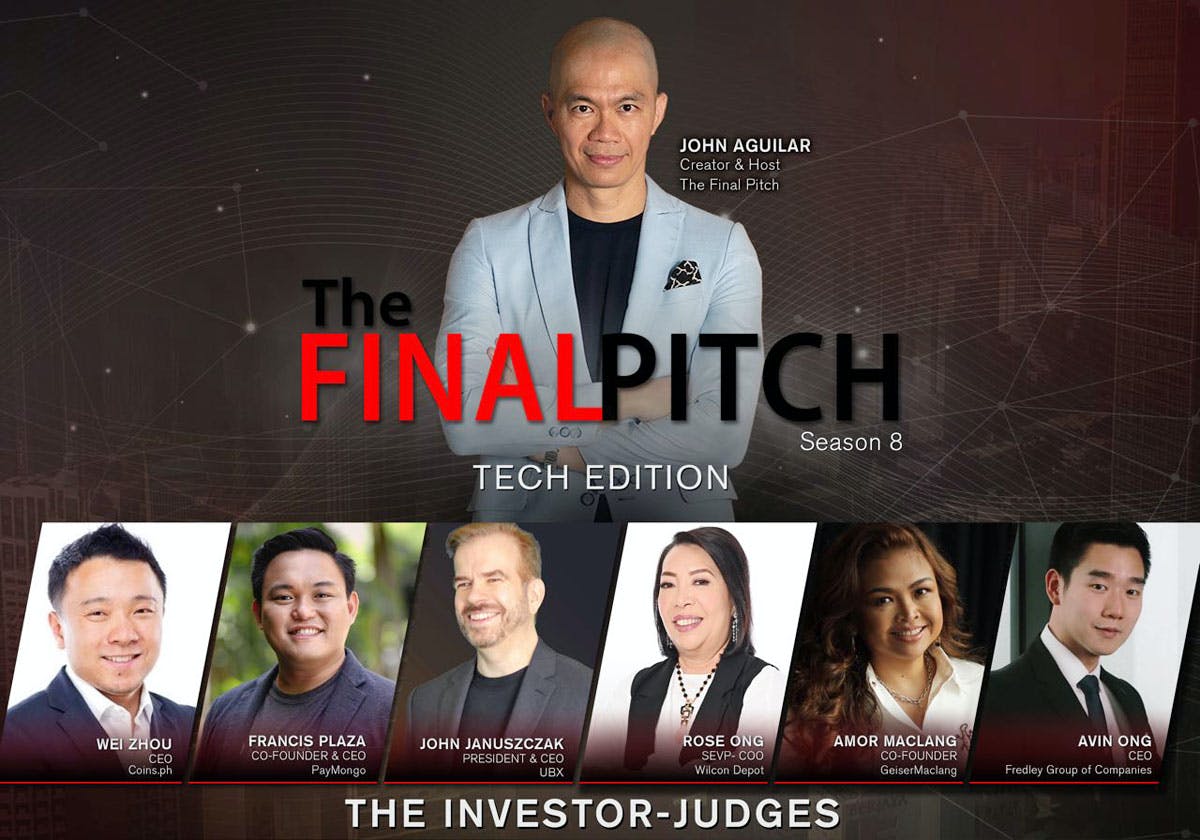 Acknowledging that technology is at the forefront of many innovations happening in the country and the world right now, business reality television show “The Final Pitch” (TFP) is going all out in search of Filipino entrepreneurs trying to blaze trails in diverse technological solutions for its eighth season.

Series creator and host John Aguilar said the tech edition is their “biggest season to date” as he welcomed new and returning investor-judges who are equally excited to meet, exchange ideas, and hopefully work with more aspiring startup founders.

In a virtual press launch held last June 6, Aguilar noted that focusing on tech-driven companies for TFP this year came as “no accident” because they observed that more or less 70 percent of entrepreneurs who participated during the previous seasons were already into applied technology.

“I think startups right now are really looking to get funded and a lot of the investors out there are looking for the kind of, I would say, exponential gains that one can get from supporting startup companies,” he said.

Aguilar and the different business leaders who will be featured on the show all agreed that embracing technological integration has become indispensable as more industries pivoted to digital services, especially during the height of the COVID-19 crisis to keep their businesses afloat.

“Regardless of industry, you have to tech up or basically die. I think that is the trend… It is no longer just an option. I think if you are not in tech, then you are no longer relevant. We’ve seen that during the pandemic and we will see that in the coming years all the more pronounced,” he said.

According to the 2022 Philippine Venture Capital Report, local startup companies raised over $1-billion seed funding in 2021 or a 179-percent increase from the previous year, generating heightened interest among local and international investors.

“The eighth season of the show is a very deliberate slant towards tech and we are looking forward to backing startups that will help our economy transition back to pre-pandemic growth levels,” said Aguilar, a serial entrepreneur himself, who runs a venture-building company called Dragon’s Nest.

Collaborating with the young and seasoned pros

Believing that technology is “the great equalizer,” UBX Philippines president and chief executive officer (CEO) John Januszczak said he is thrilled to come back as one of the investor-judges for the new season of TFP. He first appeared on the show in the same role during Season 6 in 2019.

Januszczak said he wants to work this time with entrepreneurs who can help them in the area of “decentralized finance.” UBX is one of the fastest-growing financial technology (fintech) companies, which is on a mission to “connect all 110 million Filipinos to a global economy without any barriers.”

“If you share our vision of opportunity and access for all, if you share our belief that technology is going to play a positive and material impact in driving the kind of financial inclusion and financial empowerment, then I think UBX is a great home for you,” he said.

GMCI is the convenor of Digital Pilipinas, the largest private sector-led movement that aims to build an entrepreneurial ecosystem with some of the largest technology and financial services companies not only in the country but across Southeast Asia.

Apart from tenacity, Maclang said they are “looking for companies that can actually be a force for good,” recognizing the fact that some algorithms created and designed to process huge amounts of data and information can make or break an election.

She echoed Januszczak’s thoughts about the importance of going towards the decentralization route, adding that “the best technologies without mass uptake or without you being understood,” might hold back a startup from getting any kind of financial or regulatory support.

“If you think you are brilliant and your business can create the highest and greatest impact, but you’re always in danger of breaking rules, and if you believe that the Philippines is the next big thing in technology, then we need to work together in Digital Pilipinas,” Maclang said.

For Bosch-Ong, who first joined in Season 7, returning to the show means taking advantage of the opportunity to beef up the digital footprint of Wilcon Depot. They are looking to automate some functions in their retail business operations for better customer experience and satisfaction.

“We're into different platforms now, so we want to integrate all these platforms into one seamless solution; meaning, giving the customers the option of whether they want to, you know, do it virtually when they navigate and browse our site or whether they want to do it physically,” she said.

Wilcon Depot Inc. is a 45-year-old enterprise, which also began as a startup before evolving into a leading home improvement and construction supplies retailer in the country. It currently has 76 physical stores nationwide and is primed to add 24 more outlets by 2025, according to Bosch-Ong.

Joining the esteemed panel of seasoned investor-judges are three other young successful entrepreneurs such as Francis Plaza, co-founder and CEO of PayMongo; Wei Zhou, CEO of crypto wallet company Coins.PH; and Avin Ong, founder and CEO of the Fredley Group of Companies.

Plaza and Zhou are also into fintech and are advocating for technologies that could help people solve their problems big or small. “It doesn’t have to be the grandest of technologies. At the end of the day, the question you have to answer is how does this improve somebody else’s life, right?” Plaza said.

“With what’s going on in the world now – and I think especially with COVID – is that we’re much more connected with our digital devices and spend much more time in a virtual world than before. So, there’s a whole new set of problems now that arises,” Zhou pointed out.

But Zhou also noted that just because millions of Filipinos now have e-wallets does not necessarily mean they are already financially empowered, in the same way that not everyone who owns a bank account has the wherewithal to spend money freely.

Ong, meanwhile, is interested to see the future of food delivery apps, which enabled his chain of concept restaurants to keep growing despite the pandemic. His advice to young entrepreneurs like him is to always “stay curious and hungry” for knowledge so they can achieve more.

“It’s gonna be a learning opportunity not just for the participants but also for judges like us. So, we look forward to hearing your crazy ideas, your creative ideas, and like I said earlier, we have to stay hungry for new learning and we’re really looking forward to working with everyone,” Ong said.

Filming back on-set under a bubble environment

Unlike last year when TFP inevitably shifted to a full virtual mode because of the ongoing plague driven by the COVID-19 Delta variant, Aguilar said the tech edition will be shot on location under a “bubble” environment from July 5 to 6 in Okada Manila, the show’s exclusive hotel and venue partner.

“We will be filming ‘The Final Pitch’ live for the first time in two years. So, this is going to be a great opportunity for us to be able to bring back what we’ve been doing in the past,” according to the series creator.

Okada Manila senior vice president for hotel operations Ivaylo Ivanov is also going to be a guest judge on the show. “Being one of the most technologically advanced resorts in the country, it cannot be a better match for us,” he told Aguilar.

In addition, Streamlined Campaigns Philippines managing director Kaiser Estrada will serve as one of the mentors for the season. Estrada will provide his expertise to the contestants and guide them in maximizing the benefits of online strategies and social media platforms for their businesses.

“The Final Pitch” is now accepting applications for entrepreneurs who are ready to take their startups to the next level. Interested applicants may fill up forms at TheFinalPitch.ph/application. They may also get in touch with the show at [email protected] or [email protected]

Deadline for submission of applications for “The Final Pitch: Tech Edition” is on June 24, 2022. Season 8 premieres July 31, 2022, 8:30 p.m. on CNN Philippines. The show is produced by Streetpark Productions, Inc.

Aguilar said Season 8 will serve as a prelude and a run-up to “The Final Pitch: ASEAN Edition,” which will involve Singapore, Malaysia, Indonesia, Thailand, and Vietnam by 2023. It will be filmed and broadcast across Asia.

“We are aiming for the show to be the regional platform that will enable cross border investment and cooperation across Southeast Asia. Proudly Filipino produced, for a global audience,” said Aguilar, who co-executive produces the show with his wife and business partner Monica.

According to Monica, the tech edition of the first and only business reality show on television would not only provide entertainment value for viewers, but a lot of valuable takeaways as well for the participating investor-judges and competing entrepreneurs.

“Creativity is about ideas and how to develop, understand, communicate and use technology to execute. I am excited to review business applications to see how technology will be utilized and maximized to develop new and creative ideas for the businesses,” she said.

“The Final Pitch” aired its maiden season over the History Channel before moving to its current home network, CNN Philippines, for the succeeding seasons. The show serves as a platform to showcase and celebrate the creativity of startup founders and existing business owners looking for growth.