NO REVOLUTION: Medical Frontliners Tell Duterte They Had To Go Public As Distress Calls Went Unanswered

The medical groups are not picking a fight with President Duterte; they say they had to air their grievances publicly as their earlier appeals were not heeded. They are also happy that their voices were finally heard. 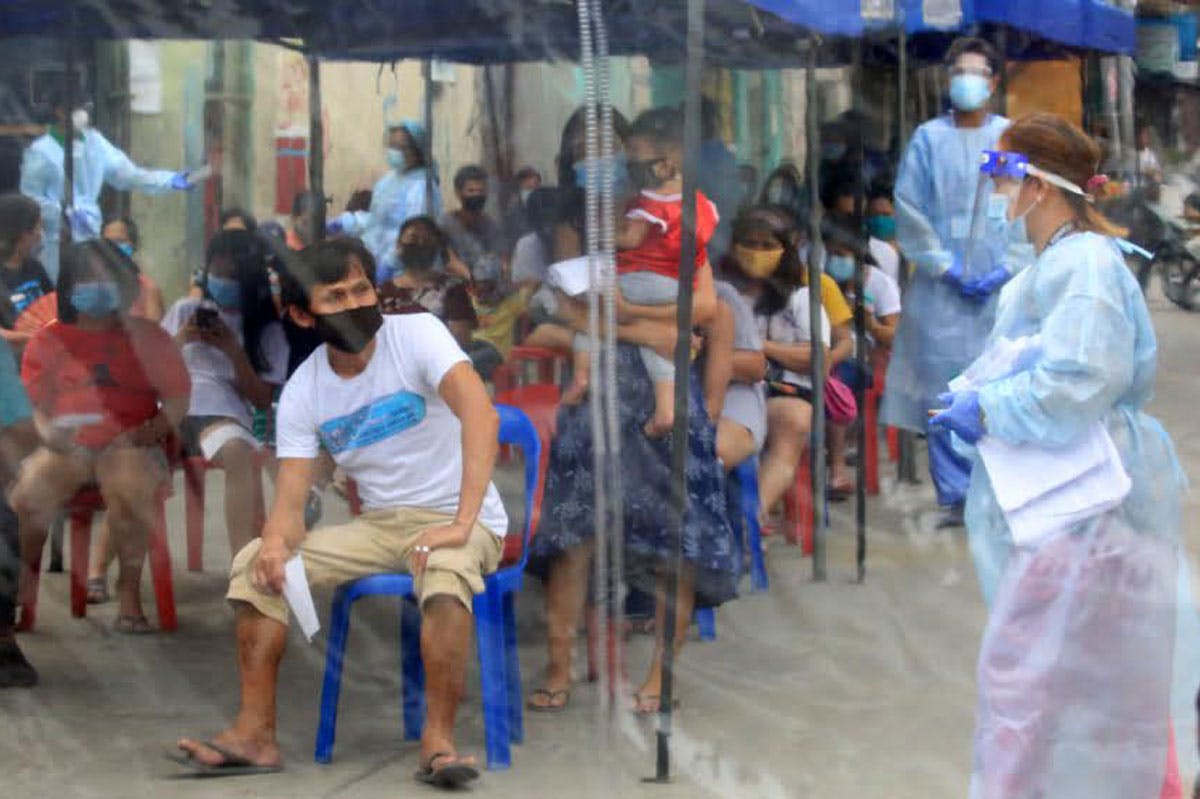 Residents of Parola Compound in Tondo, Manila avail themselves of serology testing for COVID-19 on July 28, 2020 through mobile clinics deployed by the city government. The test is for antibodies fighting the coronavirus rather than the virus itself. Photo by Edd Gumban, The Philippine STAR

The more than 100 medical groups who backed a petition seeking the reimposition of enhanced community quarantine (ECQ) in Metro Manila were “happy” that their voices were finally heard by President Duterte.

They clarified that they had no intention to threaten Duterte and his government with a “revolution” in airing their grievances publicly.

On Sunday night, Aug. 2, Duterte approved the recommendation to revert Metro Manila and other areas to modified ECQ upon the appeal of the medical community even as he scolded and warned them against a “revolution” for demeaning the government.

When they called for a “timeout” due to rising cases of coronavirus disease 2019 (COVID-19) in the country, Health Professionals Alliance Against COVID-19 co-convenor Maricar Limpin said in an interview on Monday, Aug. 3 that they only resorted to an “urgent way of bringing to the attention of the President the concerns of the health workers” who are fighting the pandemic.

“I think there is another group which the President thinks is revolutionary.  It’s not us.  All we want is to have a solidified and unified way of addressing the COVID-19 problems,” Limpin, who is also the vice president of the Philippine College of Physicians (PCP), said.

Limpin told The Philippine STAR that though they did not get the ECQ that they asked for, MECQ is still “a lot better than” the general community quarantine or GCQ.

The PCP also wrote a letter to Duterte on Aug. 3, pointing out that healthcare workers had long raised concerns about the government’s response to the worsening pandemic.

The group stressed that “we have been supportive of the government” and continued to work with the Department of Health (DOH) and local government units to deal with the crisis.

But the PCP’s letter to Duterte also hinted that the health groups had been stonewalled by the DOH and the Inter-Agency Task Force (IATF) for the Management of Emerging Infectious Diseases when they made their distress calls earlier.

“For some unexplained reason, it was left unheeded by the IATF and DOH. We bear no ill will and have acted without malice towards the implementers of the law and the bayanihan as one goal but our empty cries had to be made known somehow,” read the two-page letter of clarification signed by PCP president Mario Panaligan.

“If we just knew that your office was not briefed in detail about the situation of our workers in both government and private hospitals, we would have sought a private audience with you to settle these issues and made things clear and right,” the letter added.

Panaligan admitted they were “taken aback and surprised” when the President highlighted that frontliners are “indispensable but not irreplaceable.”

“We beg your indulgence and allow us to rectify this impression. If you closely review (our) virtual conference on Aug. 1, there was never a call for a revolt nor was there any threat of leaving patients on their own since our oath instructs us to first do no harm to anyone who needs our help,” he pointed out.

Panaligan said by their training and reserved nature, “the likes of us are not used to giving out demands or ultimatums.”

He maintained that if their requests and observations were taken as an assertive display of indignation, “we apologize for the way the message was taken in a negative light.”

Panaligan gave assurance that their intention was not to humiliate the administration and the IATF.

“The call was for the (DOH) and IATF to provide the (healthcare) workers a fighting chance in the war against COVID-19 and prevent unnecessary fatalities – nothing more,” Panaligan underscored.

Going forward, the medical associations said they were glad that the President’s office was open to suggestions. 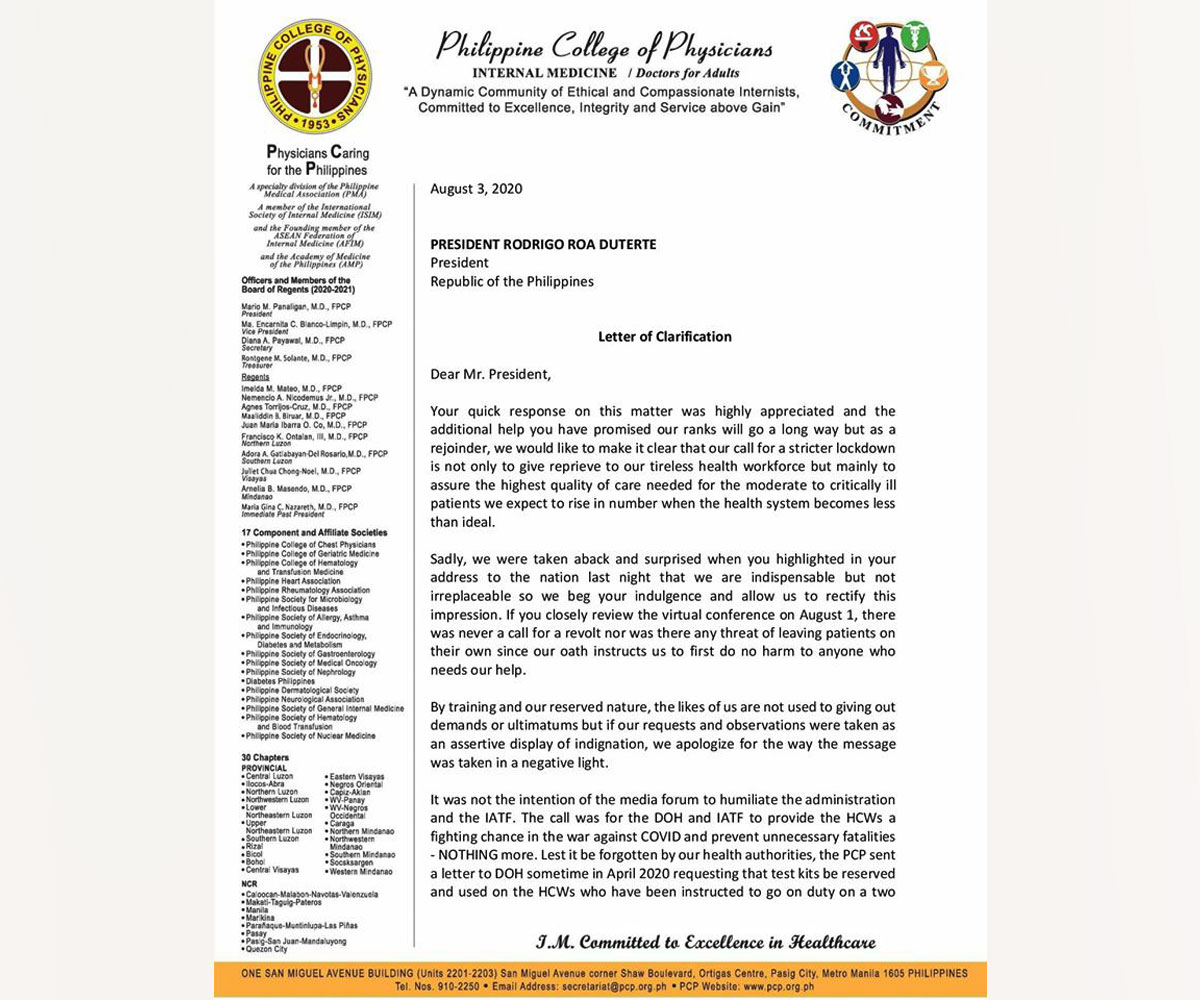 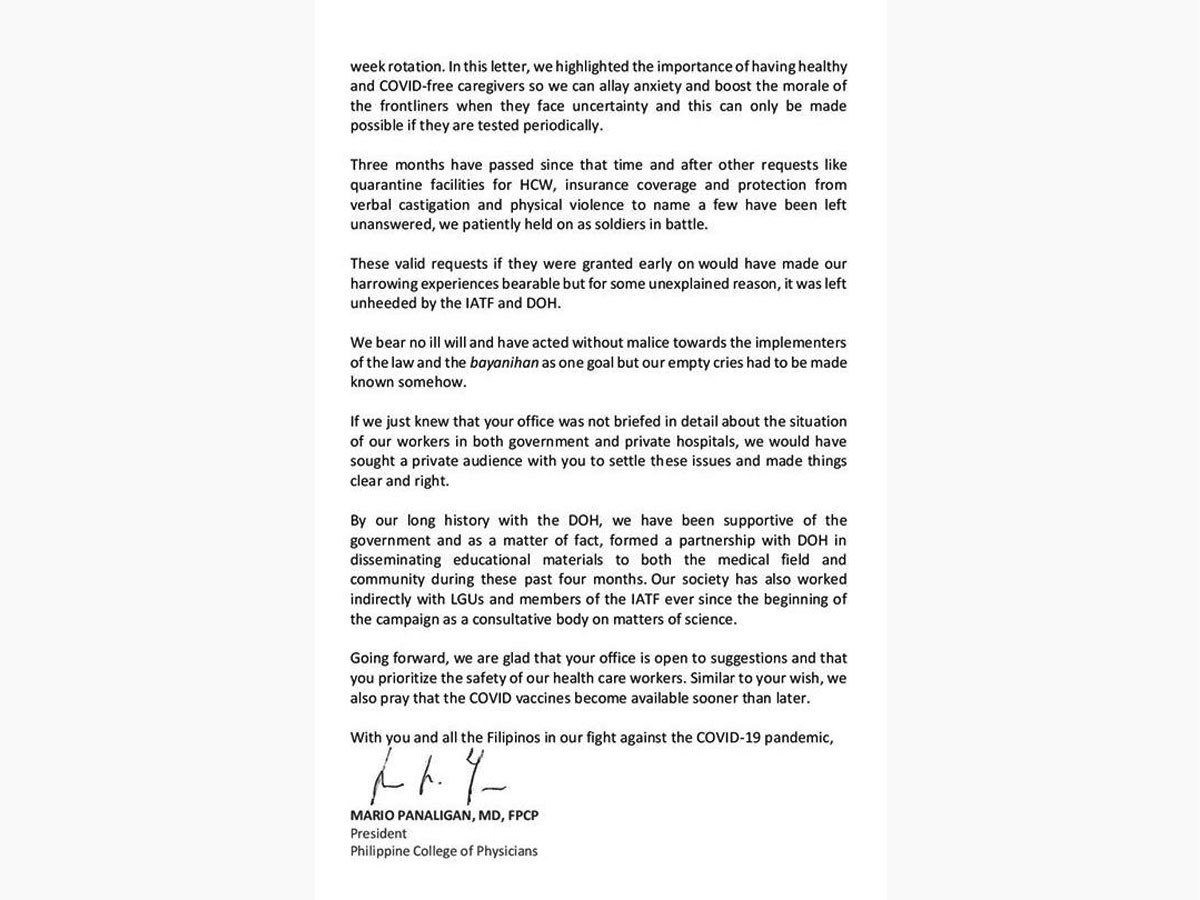 The government had announced on July 31 that from Aug. 1 to 15, GCQ would continue to be enforced in Metro Manila, Bulacan, Rizal, Laguna and Cavite to allow more businesses to operate and more employees to go to their workplaces.

In his speech on Sunday, Duterte initially said: “I fully understand why your health workers would like to ask for such a timeout period. They have been in the frontlines for months and are exhausted.”

He added: “COVID is the enemy, not the government.”

But while he agreed to grant the requests for additional benefits and the timeout, Duterte scolded the health workers for airing their grievances about the government’s pandemic response before the public instead of informing him first about their concerns.

On Saturday, Aug. 1, the PCP held a virtual press conference to urge the government to place Mega Manila under ECQ again for two weeks so the authorities would have time to improve their strategies against COVID-19.

The group also said the Philippines is “waging a losing battle” against the pandemic and that the medical frontliners are already “burned out with the seemingly endless number of patients trooping to our hospitals for emergency care and admission.”

“Now, if you say what is good for us and you raise the spectacle of your agony, you treat it as if you are about ready to stop working. Don’t do that because our countrymen would suffer. Who will we turn to?” Duterte said in Filipino during his televised address.

“But to go almost on a – not really a rampage, but an outrage, as if you are angry – don’t do that because you know we are all working here,” he added.

Duterte then dared critics of the government’s pandemic response to launch a “revolution.”

“We do not forget you. There would have been no need for you to go into... raising your hands as if you are saying revolution, revolution. Now, if you think that this can be solved by revolution, then by all means, start it. I prefer that... Go ahead, because I would be calling all people who love their country to come forward and work for the people,” the President said.

“The health workers who are not connected with the government, we will try to help. But there is no need for you and for the guys... telling us what to do publicly. You could have just (written) us a letter. We are complying with everything that you say,” he noted. “You want me to buy something, but one of my pockets is empty because we have suffered economically and individually.” 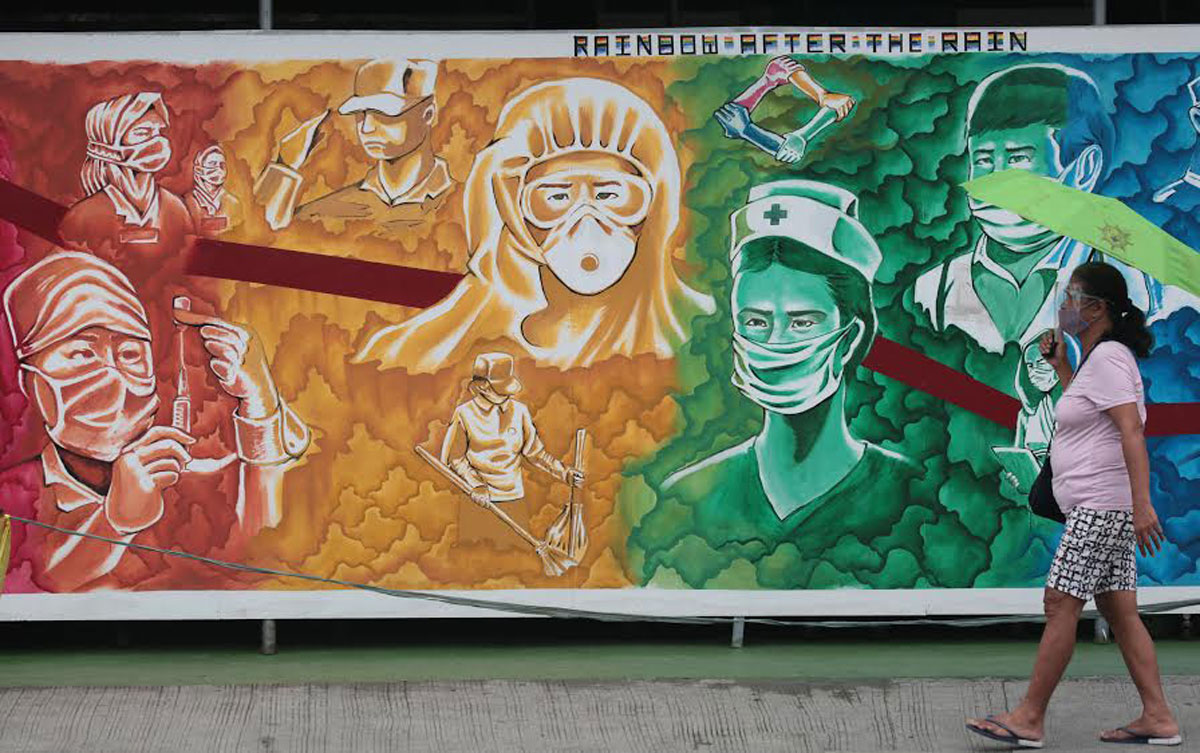 Asked to explain Duterte’s remark, presidential spokesman Harry Roque noted that the letter of the PCP was released to the public and to the media even before it was sent to the President.

“It was clear to the President that there is no need for a splash. They should have provided him the opportunity to respond to the letter before the publicity,” Roque said in a press briefing on Monday, Aug. 3.

Roque also cited the successive criticisms against the government by opposition figures Vice President Leni Robredo and Sen. Franklin Drilon and the release of the Filipino version of the “Les Miserables” song “Do you Hear the People Sing?”

“So the President said if those who are taking advantage of the pandemic want to replace him through a revolution, he said they can go ahead,” Roque said. “I am just repeating the words of the President. There is no drama in his words: Do not ride on the pandemic. They can launch a revolution if they want to.”

Roque clarified that Duterte’s remark about launching a revolution was directed at critics who sang the protest song and was distinct from his message to frontliners.

“There is no issue there. The President just expressed his view,” Roque said.