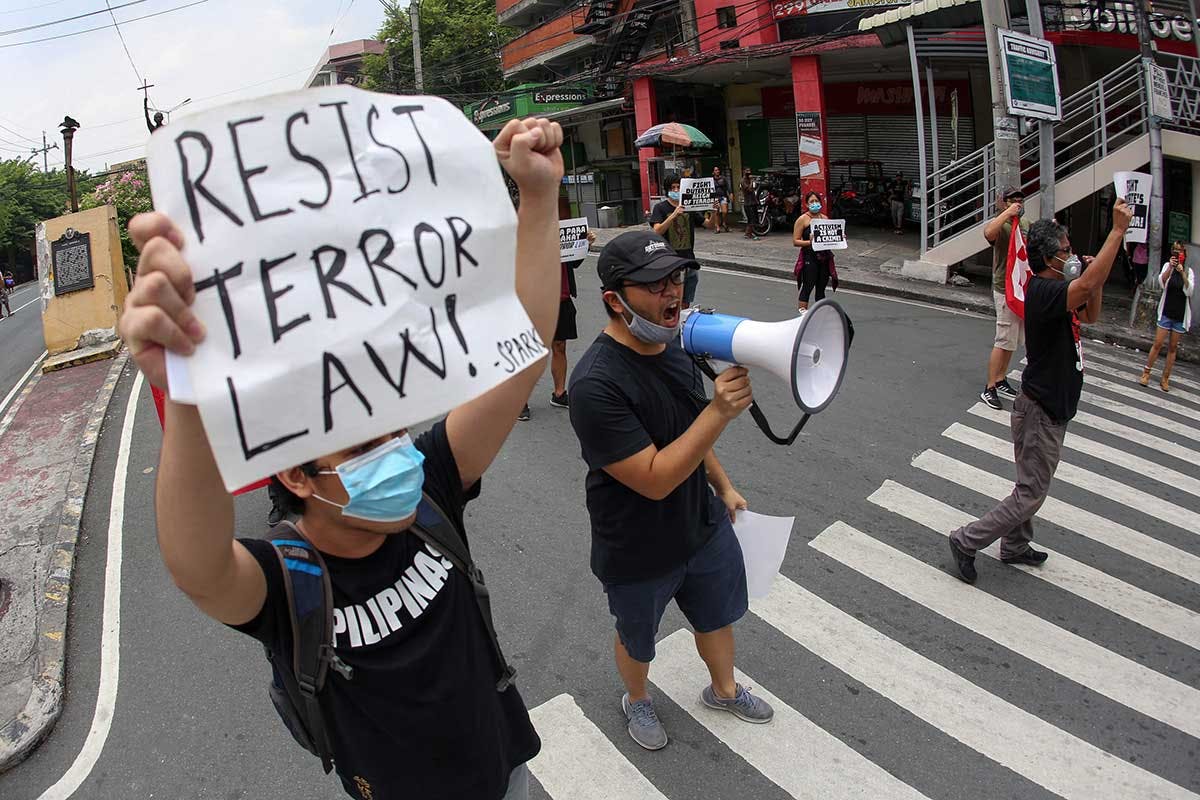 Fifty members of the United States House of Representatives have formally asked the Philippines to immediately repeal the Anti-Terrorism Act for seeking to silence critics and endangering the human rights situation in a country whose president is perceived to be “intolerant” of dissent.

Senior Chief Deputy Whip Jan Schakowsky of Illinois – who also voted against her country’s anti-terrorism law, the Patriot Act of 2001 – led her US House colleagues in submitting the letter to Philippine Ambassador to Washington Jose Manuel Romualdez on July 15.

Sotto reminded the Americans that they have a more stringent law against terrorism. He

accused the US legislators of being “misinformed” and quipped: “Mind your business, scratch your own galis (mange).”

Schakowsky expressed her support for Filipinos when she appeared with former Bayan Muna party-list Rep. Neri Colmenares in a virtual briefing held by the International Coalition for Human Rights in the Philippines on July 15.

“We stand with Filipinos, Filipino-Americans, and grassroots organizations in the Philippines in demanding a genuine democracy where dissent is accepted and encouraged, instead of criminalized,” the House leader said.

She echoed the criticism by Philippine lawyers and human rights advocates that the provisions of the law are overbroad, which means the definitions are too loose to allow abuses by law enforcers and can chill ordinary people into silence.

Schakowsky pointed out that President Duterte “has shown he is intolerant of any and all dissent.”

“We believe that it’s already being used to stifle peaceful dissent and target civil society including human and labor rights groups in the Philippines,” Schakowsky said.

“We fear it will also be used against anyone who protests against the government, whether be it against abuse in the government, delay in the distribution of COVID-19 aid, or any other grievance,” she added.

Congressional Asian Pacific Caucus chair Rep. Judy Chu of California said in the briefing: “Despite the title, this legislation is not about terrorism. It’s about silencing dissent.”

“The true targets of this law are advocates for human rights, the environment, workers, and indigenous communities,” said Chu, the first US representative to speak out against the attempted killing of American paralegal volunteer Brandon Lee in Lagawe, Ifugao, in August last year.

“We are watching,” Chu added, as she noted the “targeted killings” of labor and human rights activists and the “silencing” of news website Rappler, which she described as “a media outlet which was instrumental in exposing this government.”

“We see the ongoing attacks against any who dare to speak out against the targeted violence and the trampling of rights,” Chu noted. 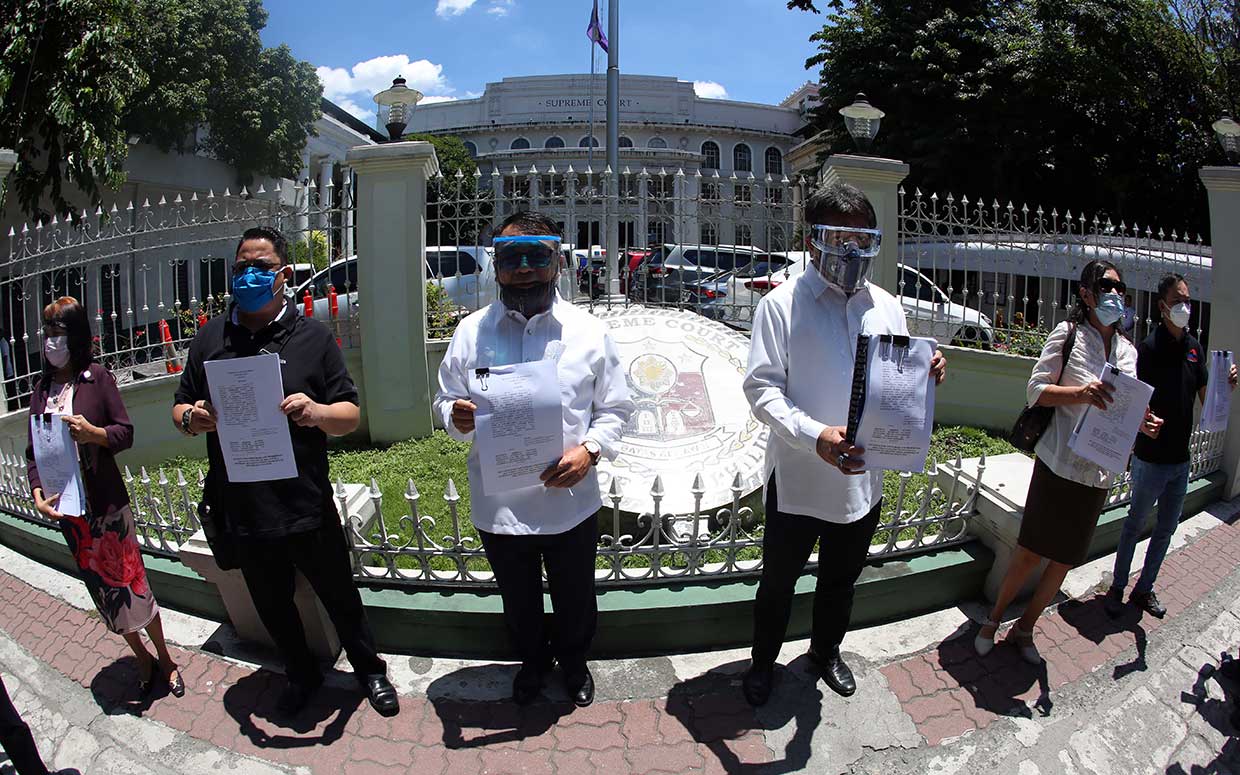 Colmenares expressed hope that the call by US House members “will really have a major pressure” on the Philippine government to “tone down its human rights attacks.”

“It may not be a very big deal” for the others in the US Congress or Senate, Colmenares said, but in the Philippines, “it will save lives.”

Unlike Schakowsky, Engel and Smith voted in favor of the Patriot Act two decades ago when the fight against terrorism was just starting to lead to human rights abuses and torture of suspects.

Schakowsky’s announcement came a day after Swedish climate activist Greta Thunberg warned that the Philippine law “puts environment and climate activists in the country at risk.”

Roque told the US House members not to step into the controversy because nine petitions are already pending before the Supreme Court.

“To the congressmen who signed it, we have a working judicial system and we can rely on our judicial system to rule on the constitutionality of the Anti-Terror Law,” he said.

Roque reminded the Americans of the brutality and violence that characterized the US occupation of the Philippines in the early 20th century.

Sotto said the US legislators should look into the much more stringent provisions of the Patriot Act, one of which allows the indefinite pre-trial detention of terror suspects. Opponents of the Philippines’ Anti-Terror Law say the two measures are not comparable since the two countries have different Constitutions.

“Bago sila mamintas sa atin, tingnan muna nila ’yong kanila. Napakahigpit ng kanila. Napakasobra, ang layo sa atin (Before they criticize our law, they should look at their own. Theirs is very harsh. Too excessive, far from ours),” Sotto said in an online interview with reporters.

President Duterte signed the Anti-Terror Law or Republic Act No. 11479 on July 3. It was published in the July 6 issue of the Official Gazette, which means it will take effect after 15 days, or on July 21.

The other petitions were filed by:

· Members of the Makabayan party-list bloc

Overall, the petitions argued that the definition of “terrorism” under Section 4 of the law is so vague and overbroad that law enforcers would have the discretion to just arrest anyone, especially dissidents and activists.

Proponents argue that the clause “shall not include advocacy, protest, dissent, stoppage of work, industrial or mass action, and other similar exercises of civil and political rights” should suffice as an assurance.

However, lawyers point to the caveat “not intended to cause death or serious physical harm to a person, to endanger a person’s life, or to create a serious risk to public safety” as a possible license for law enforcers to arrest protesters in case of accidents or even just being present outside in the time of a raging pandemic.

The petitions also question the grant of the power to the Anti-Terrorism Council to order the warrantless arrest of persons merely “suspected” of committing terrorist acts, an allegedly blatant violation of the Constitution’s requirement for a warrant to be issued by a judge upon finding of probable cause.

Mere suspicion is not among the exceptions allowed by the Rules of Court for warrantless arrests. The only allowable instances are when the person is committing, has committed or is attempting to commit a crime in the presence of an officer, when the officer has personal knowledge that the person has just committed a crime, or when the person is an inmate who escaped from confinement.

Opponents of the law also question the provision for a maximum of 24 days’ detention without being charged. This is way more than the three-day limit allowed by the Constitution during the suspension of the privilege of the writ of habeas corpus in times of invasion or rebellion.