Why Could She Not Grieve In Peace? Lack Of Compassion For Political Prisoner Who Lost Baby River Assailed

On Wednesday, Oct. 14, activist Reina Mae Nasino was finally allowed, under heavy guard, to see her daughter River – already in a coffin. 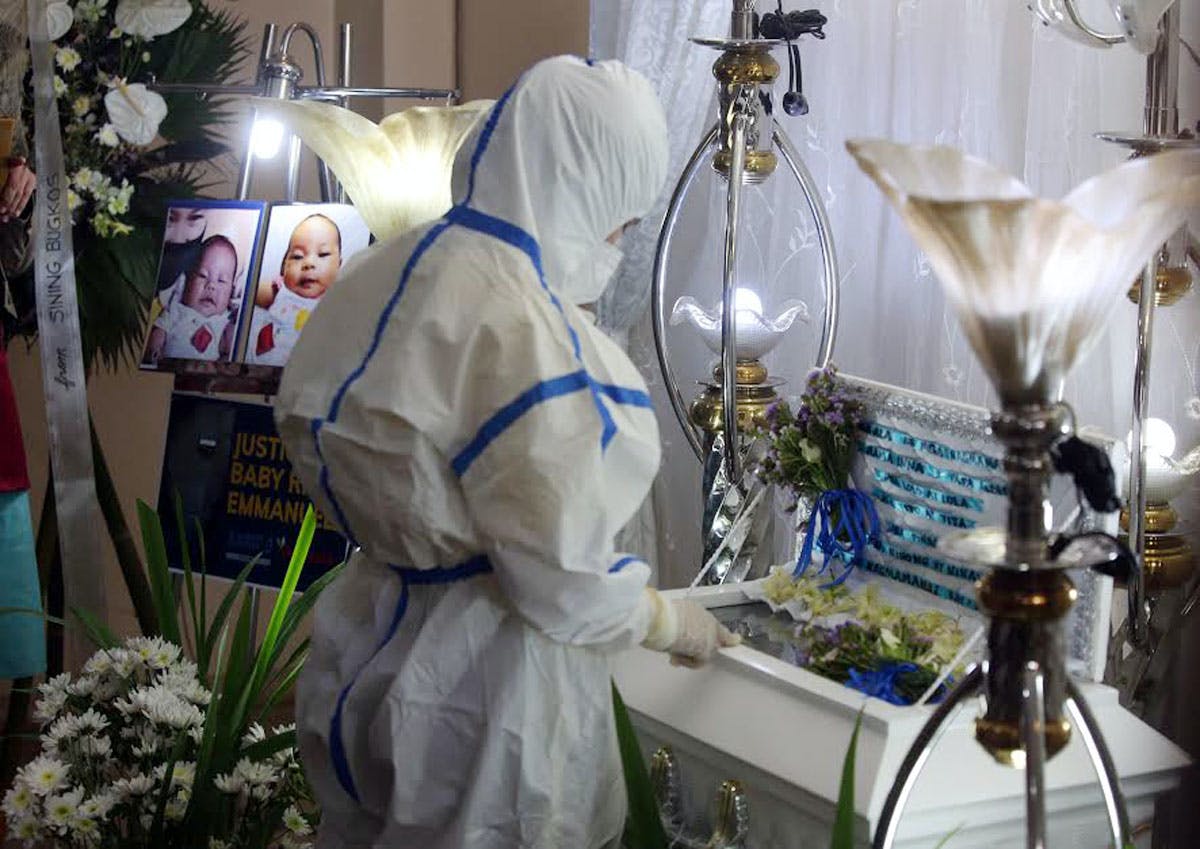 Detained activist Reina Mae Nasino mourns the death of her baby River at the Funeraria Rey in Pandacan, Manila on Oct. 14, 2020 after she was granted furlough by a Manila regional trial court. Photo by KJ Rosales, The Philippine STAR

The pleas of detained activist Reina Mae Nasino to be with her daughter River were repeatedly denied by a Manila court until her baby died on Oct. 9.

This prompted calls for authorities to be more compassionate and review existing standards for the healthcare of pregnant inmates and meet the special needs of women and nursing mothers in jails.

On Wednesday, Oct. 14, Nasino was finally allowed, under heavy guard, to see her daughter – already in a coffin.

A Facebook Live coverage of Nasino’s bereavement visit by the Defend Jobs Philippines showed her security escorts refusing to leave her side.

Those who were able to watch what happened lamented how high-profile inmates, including politicians, have been granted furloughs for reasons that are not tragic like the death of a child.

Seeing rifle-bearing Manila police and jail guards entering Funeraria Rey in Pandacan, Manila with Nasino, netizens asked: why could she not be allowed to grieve in peace?

The 23-year-old mother was in handcuffs and wore full personal protective suit as she arrived at the wake to mourn.

Nasino struggled to wipe away tears as she looked at her baby in the coffin. Her mother, who knelt in front of her at one point, also wept.

It came as a surprise for the grieving family that Nasino, who was granted by the Manila Regional Trial Court (RTC) only a three-hour furlough for the wake, was escorted by more than 20 members of the Philippine National Police and the Bureau of Jail Management and Penology (BJMP).

The surprise was due to the fact that Nasino’s requests to be with her daughter were initially denied supposedly because of the lack of personnel to guard her while outside jail.

Nasino was allowed another three-hour furlough for her baby’s burial at the Manila North Cemetery on Friday, Oct. 16.

Monteron told the court that they have only 12 personnel to guard 665 female detainees. The BJMP also justified its opposition to the longer furlough by classifying Nasino as a high-profile inmate. 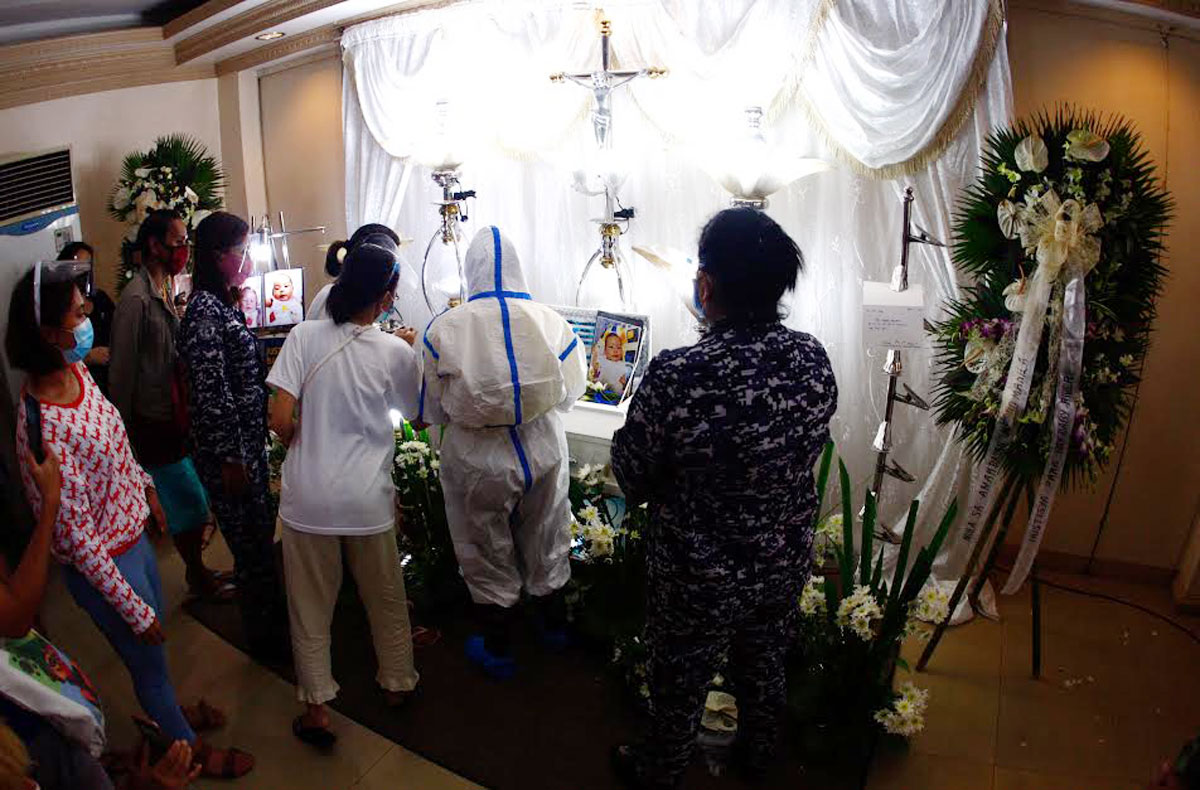 Nasino’s visit was also marred by a tense encounter between her grieving family members and the BJMP officers who barred her from talking to the media and tried to whisk her away an hour before the end of her furlough.

Marites begged that her daughter be given at least a moment to grieve in private. But escorts refused to allow Nasino to be out of their sight.

Despite being barred from media interviews, the grieving Nasino was able to talk with Defend Jobs Philippines, which aired it live on its Facebook page.

Nasino recounted her first moments with River, who was born underweight last July 1. She was able to breastfeed the baby while in detention for a month, until she had to give her away to her mother Marites on Aug. 13. Nasino emphasized the importance of breastfeeding for the baby’s health, and as protection against any virus or illness.

Nasino was among three activists arrested after the police raided the office of Bagong Alyansang Makabayan in Tondo, Manila as part of the government's crackdown on the Left. Her camp maintains that the firearms and explosives recovered from Nasino and other activists were planted.

When Nasino was apprehended on Nov. 5, 2019, she was one month pregnant. She gave birth to her baby at Dr. Jose Fabella Memorial Hospital in Manila.

In a July 20 order, Manila RTC Branch 20 Judge Marivic Balisi Umali denied Nasino’s request to stay in the hospital or be with the baby to breastfeed her while in detention, siding with the warden who said the jail is no place for a baby.

“We cannot compromise the security and safety of 817 persons deprived of liberty to one PDL who is a nursing mother alone. This jail facility has a depleted number of personnel, thus we cannot provide personnel to be utilized to escort PDL Nasino in the hospital for 12 months,” the letter of the jail warden read.

In light of the limited resources of the Manila City Jail female dormitory as presented by its officer-in-charge “and of which the Court is aware, the instant motion is denied,” the judge ruled at the time.

Nasino brought her case to the Supreme Court (SC) in April so she would be released on humanitarian grounds but the high tribunal has deferred ruling on the matter. Marites has been going to the SC on Padre Faura in Manila to plead for her daughter's release along with other political prisoners and vulnerable inmates.

Read more: Safe Or Unsafe? Should Prison Conditions Be Considered In The Release Of Detainees Amid The COVID-19 Outbreak? 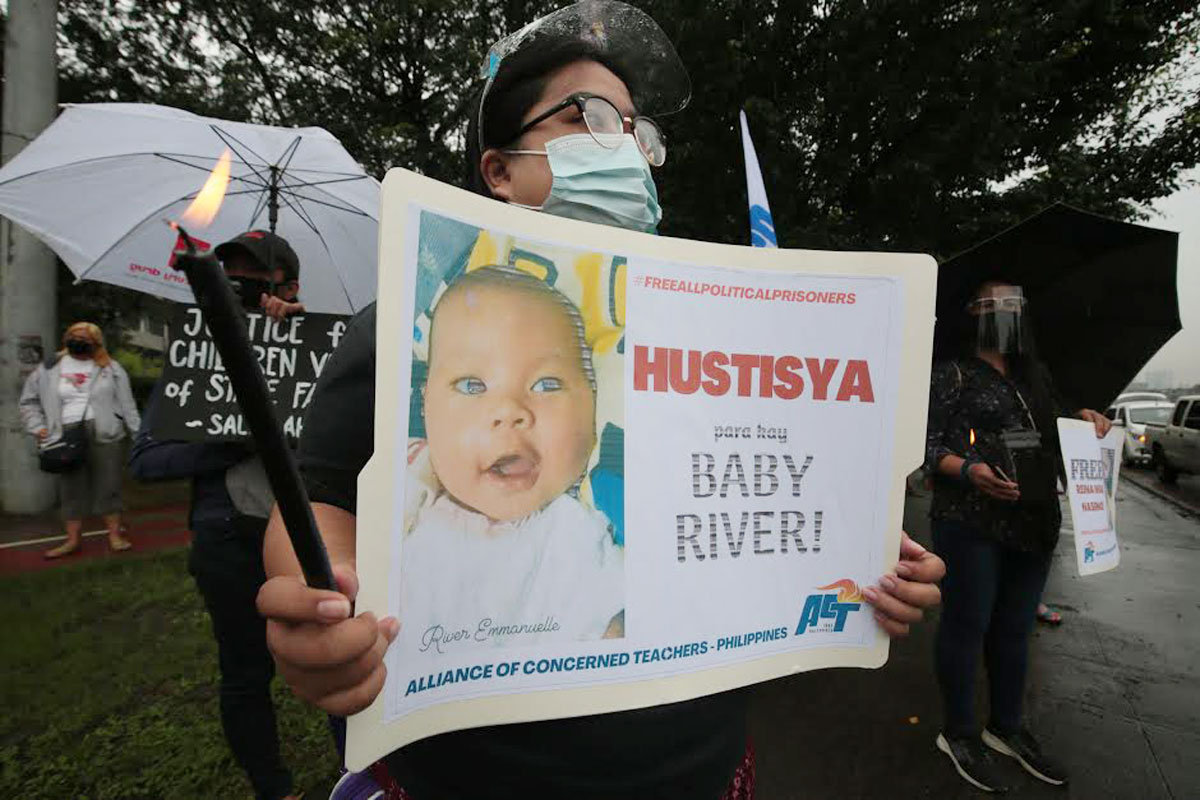 In a statement, KAPATID denounced the reduction of the furlough, which the BJMP said was for health reasons, based on fears that Nasino could contract COVID while outside jail.

The group also questioned why the judge’s earlier order for a three-day furlough was easily overturned by a warden’s letter opposing it based on the limited number of custodial personnel.

“Now, a mere warden can thwart a court order, invoking the same reasons of lack (of) personnel and so-called health concerns. With all that Reina Mae has been through, that court order of three days is not even enough consolation,” the group said, citing longer furloughs granted to high-profile politicians.

As early as 3 p.m. at the wake, the security escorts formed a human cordon to take Nasino back to jail. Nasino’s lawyers argued with the escorts that the court order allowed her up to 4 p.m.

But their pleas went unheard. Nasino was taken away at 3:40 p.m., several minutes short of her approved furlough.

On Monday, Oct. 12, Malacañang  – through presidential spokesman Harry Roque  – said the death of Baby River was saddening, but President Duterte could not do anything about a court order that effectively separated the mother from the child.

Baby River died of acute respiratory distress syndrome, almost two months after she was separated from her mother. On Sept. 24, she was brought to the Manila Medical Center due to diarrhea and fever and was later confirmed to have pneumonia. She passed away on Oct. 9 as her lungs succumbed to bacterial infection at the intensive care unit of the Philippine General Hospital.

Human rights group Karapatan assailed the government over the death of the child, saying its “inhumanity” is “beyond comprehension.” Activists have also called for the release of Nasino, saying she is one of the “political prisoners” who are being persecuted by the government.

On Sunday, Oct. 11, Sen. Nancy Binay called for greater compassion from jail authorities and prosecutors to grant Nasino temporary release from detention and allow her to visit the wake of her three-month-old baby.

Binay had earlier asked jail authorities to temporarily release Nasino so that she could properly nurse her baby.

“What we’re fighting for is to have a legal basis under existing laws for courts to provide alternative modes of confinement for women detainees for humanitarian and compassionate reasons,” she said.

The senator has been vocal in her advocacy for compassionate programs, especially for pregnant women and parents who are in jail.

Since 2014, Binay has filed and re-filed several Senate bills and resolutions for alternative ways of confinement based on humanitarian grounds, and has asked that the condition of women, pregnant inmates and nursing mothers in jails be looked into.

In the previous Congress, she filed Senate Bill No. 1886, or “An Act Creating Programs for Incarcerated Parents and their Children,” which aims to help parents develop and maintain their relationship with their children while behind bars.

“We must also review whether the existing policies and protocols of the BJMP regarding women detainees, especially their access to medical care and facilities, are still relevant with the new normal,” Binay said.

On Tuesday, Oct. 13, Vice President Leni Robredo supported calls for Nasino to be granted furlough “so that she can be with her family and loved ones during this difficult time.”

“This is the least we could do for a mother who lost her daughter too soon and under these painful circumstances,” Robredo said.

“As Filipinos, as human beings, we know how intimate and important the relationship between a mother and child is – from the first embrace up until the last breath. I hope we respect and uphold this relationship. We urge the court to choose compassion and empathy,” she added as she offered her deepest condolences to the Nasino family.

Amid her bereavement, Nasino was able to pose in front of her child’s coffin, left fist raised, holding a photo that is a reminder of her baby’s short life. – With Alexis Romero, Paolo Romero