Under the law, the Film Development Council of the Philippines does not have the power to regulate movies – yet it threatens fines and prosecution if productions do not report details of their video shoots a week in advance. 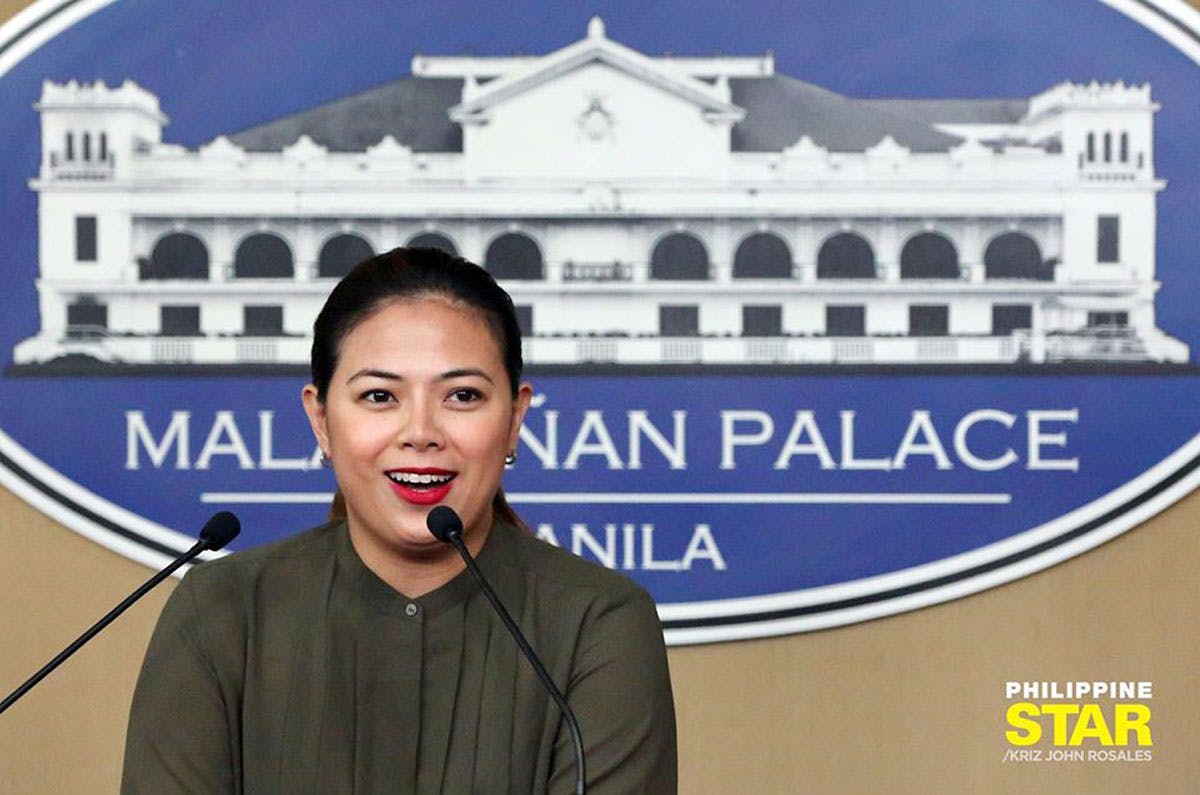 Film Development Council of the Philippines head Mary Liza Diño appears in a press conference at Malacañang on Dec. 21, 2016. Photo by KJ Rosales, The Philppine STAR

The government is seeking to exercise regulatory powers over the creative industry as a whole by requiring every production, including those held indoors and online, to submit reports seven days before shooting, using the coronavirus disease 2019 (COVID-19) pandemic as reason.

At the heart of the controversy is the Film Development Council of the Philippines (FDCP) as it issued guidelines that could intervene in all kinds of productions – including television, advertising  and online media – even if the law that created it did not give it much power beyond promoting the movie industry and giving grades to films.

Industry stakeholders say the requirement to inform the Department of Labor and Employment (DOLE) and the Department of Health (DOH) of all scheduled shoots a week in advance serves as a prelude to more government control over all creative productions.

The questioned policy is contained in Part H of the General Guidelines of Joint Administrative Order No. 2020-001 issued by the FDCP, DOLE and DOH. The section states that “all scheduled production shoots (whether for film, TV, web, and other audiovisual content) must be reported to DOLE and FDCP at least seven days before the production shoot day.” The order became effective upon its release on June 7.

The FDCP on June 27 issued Advisory No. 6, which confirmed its intention to exercise regulation over forms of media outside the scope of its mandate under Republic Act No. 9167, which created the council and defined its powers and functions.

The advisory stated that the shooting report would be required not just for film production, but also for television program, advertising content, corporate audiovisual, animation, live event and other audiovisual content productions without the physical presence of audience, patrons or guests.

The “production registration form” should contain “specific details of the planned production shoot,” although the required details were not specified apart from the listing of the people who would participate on site.

The FDCP imposed another rule – it should be given a “health and safety commitment declaration” prior to the start of the production shoot.

The joint order and the FDCP advisory threaten to impose the administrative fines provided under DOLE Department Order No. 198, series of 2018, for violation of occupational safety and health standards.

The rules also threaten prosecution under the now-expired “Bayanihan to Heal as One Act” as well as the Mandatory Reporting of Notifiable Diseases and Health Events of Public Concern Act (Republic Act No. 11332). For the latter, violations are punishable by a fine of P20,000 to P50,000 and/or imprisonment of one to six months. A Bulacan court already found the law inapplicable to quarantine violations, but until the legal question reaches the Supreme Court, the issue remains far from resolved.

Under RA 9167, the FDCP is only empowered to implement a Cinema Evaluation System that gives grades to films only for the guidance of the Movie and Television Review and Classification Board, the Videogram Regulatory Board, the Department of Trade and Industry (DTI) and other agencies for the purpose of viewing, reproduction, exportation and other purposes. The system is not even supposed to serve as a censor.

The FDCP’s other powers are developing an incentive and reward system for producers, organizing film festivals, encouraging activities to promote the growth of the industry, developing skills enhancement programs, establishing a film archive, and investing in activities that directly and indirectly promote industry development. Penalties under the FDCP charter only concern the remittance of amusement tax. 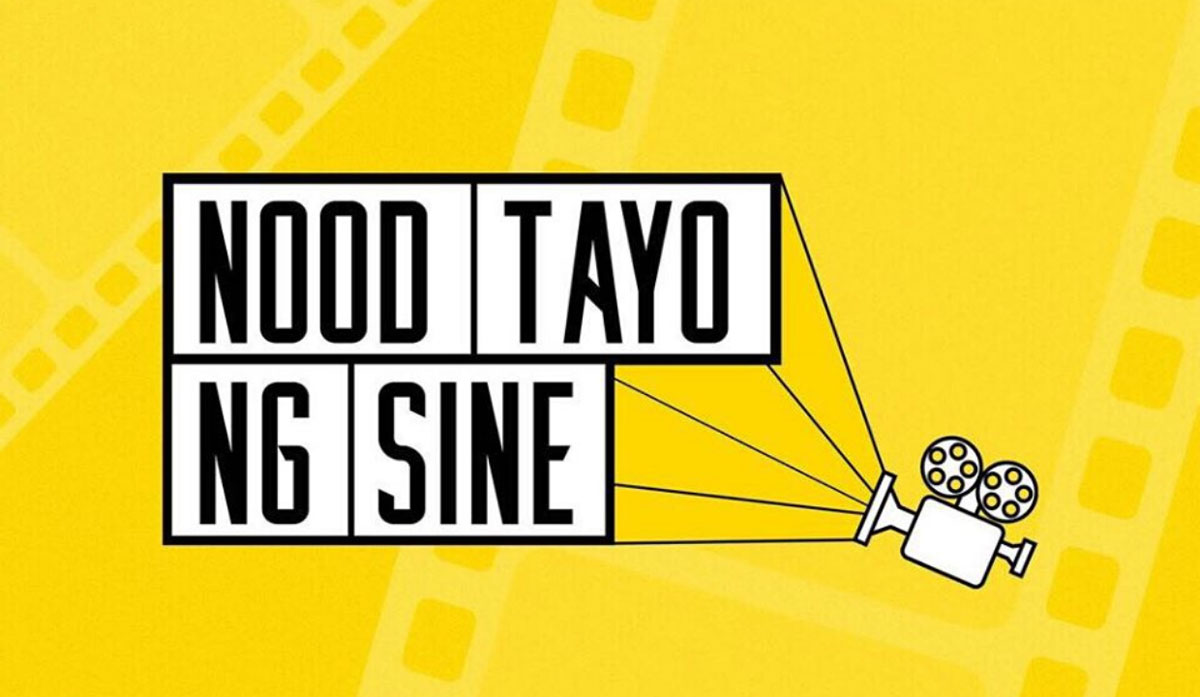 Advocates of freedom of speech frown upon any sort of regulation that the government may use as an excuse to curtail expression and stifle dissent. There are also practical concerns, as local productions are done on the fly with tight schedules and some forms of media tend to be spontaneous.

The Directors’ Guild of the Philippines Inc. (DGPI) said it “opposes any form of additional agency intrusion on productions – not during a pandemic, not ever.”

“The slippery slope from ‘reporting’ to ‘monitoring’ to ‘controlling’ is steep and dangerous to freedom of expression,” the DGPI said.

The Inter-Guild Alliance (IGA) cited four reasons for opposing the FDCP advisory: the addition of totally unnecessary layers of bureaucracy, the disclosure of confidential information without any bearing on health and safety, the encroachment upon industries beyond its scope, and the expansion of control that “borders on government intrusion and censorship.”

Film Workers Unite said the FDCP “on its own announced their own guidelines to the media” even as the conversations with industry stakeholders were still ongoing. “The consultative process that film workers engaged in was scrapped in favor of rules that were at best out of touch with the realities of filmmaking,” it said.

The group said the registration requirement, even for online activities, is a “vague, overreaching power (that) teeters dangerously close to government control of free speech online.”

Comedian Gabe Mercado noted the absurdity of the FDCP rules, citing the example of his improv group. Improv, short for improvisational theater, is created spontaneously without any planning or scripts.

“We have no scripts. We have no budgets. We have been performing live shows weekly for 18 years now. We started streaming online shows (separately and from our own homes) since the pandemic began,” Mercado said.

“Now our government through the (FDCP) wants specific details of our shows including the list of performers registered with them at least (seven) days before our online shows or we face penalties in administrative fines or other legal actions,” he added.

In a statement, AKTOR decried the “culture of fear” being stoked by the government’s moves against the media.

“(All these moves point to the desire to control the flow and essence of storytelling: to stop us from telling the real story of the people),” AKTOR said.

“We strongly oppose any law or order that curtails our freedom to create. We reject any move to meddle in the industry’s processes without any true consultation with its workers. We demand the open flow of any exchange of information and the creative arts for the betterment of the majority,” it added. 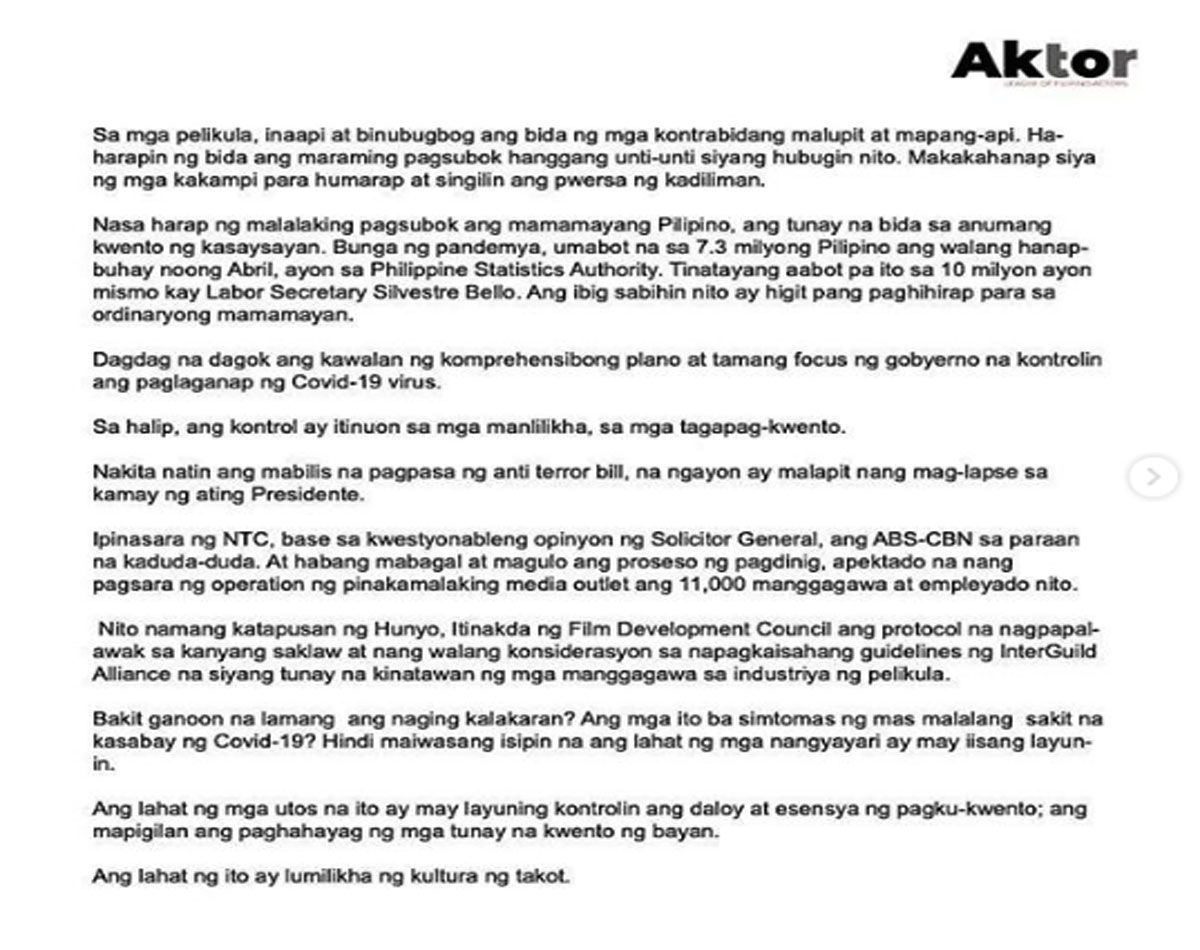 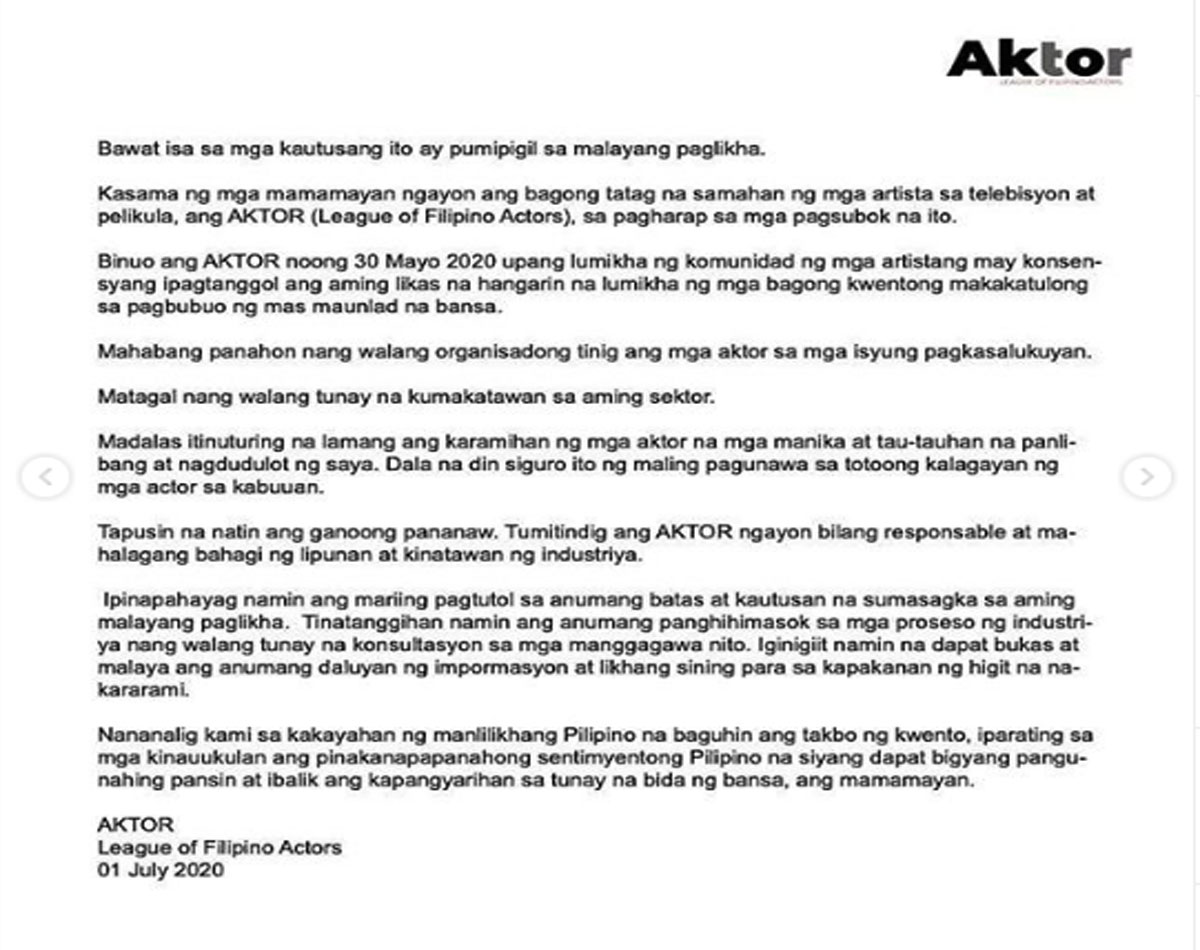 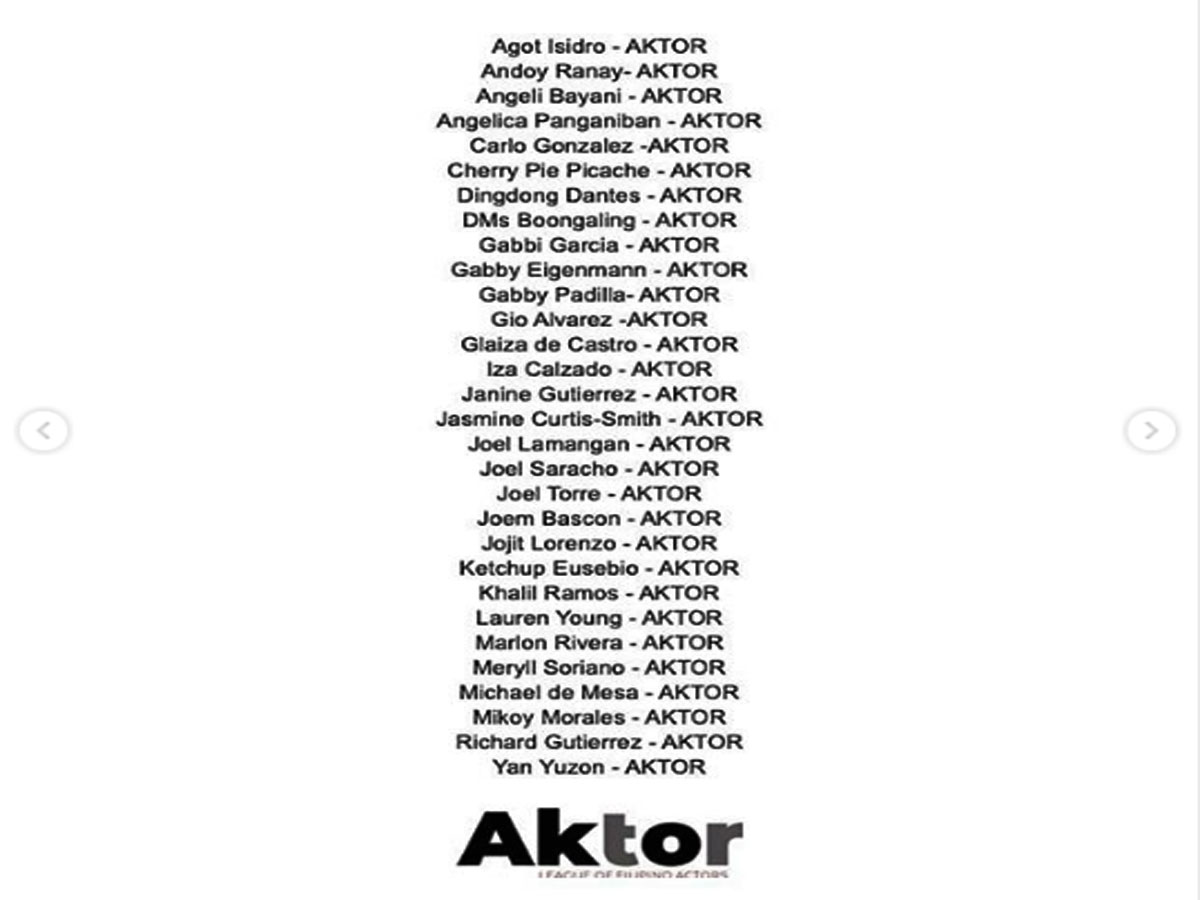 Notably, the IGA already drafted a set of proposed guidelines for health and safety standards, which the Philippine Motion Picture Producers Association approved for the use of its members.

Even as the IGA said the FDCP “needs to come to its senses” and “really listen” to industry stakeholders, chairperson Mary Liza Diño doubled down on what critics decry as the council’s overreach.

In the #LagingHandaPH press briefing on July 1, she hinted that it was the FDCP’s initiative to extend its reach to other forms of media by approaching the DOH to come up with rules. She argued that the lockdowns enforced due to the pandemic were causing audio-visual productions to diversify.

Diño insisted that none of the guidelines assailed by the industry groups would be changed despite the concerns and objections.

“Lahat po ng guidelines na inilagay natin sa advisory (All the guidelines we put in the advisory) are just reiteration of the existing joint administrative order…),” she said.

How other agencies react

In the same interview, DOH Undersecretary Maria Rosario Vergeire said the FDCP was not the only one that worked to lay down these health and safety guidelines.

“Nakikipagtrabaho po tayo sa lahat ng ahensiya para iyong iba’t-ibang sektor mabigyan po natin ng guidelines na ganito (We worked with all agencies so the different sectors will be given guidelines like this) so that we can assure the protection and safety of our employees,” Vergeire said.

Vergeire defended the guidelines, saying these were meant to ensure that health and safety protocols against COVID-19 are implemented.

“We want to send the message that the minimum health standards need to be enforced.  This is not only for one specific agency that is working with DOH to implement this,” she noted.

On the other hand, presidential spokesperson Harry Roque said in a briefing on Thursday, July 2, that concerned agencies would meet with the stakeholders of the film industry to determine what needed to be changed in the guidelines.

“I had questions about the alleged guidelines that they have issued to govern the resumption of work in the film industry, noting that the statute and the executive orders that created the council did not give it regulatory powers,” Roque said.

He said an administrative order is being crafted for the health and safety protocols for the film industry. – With Sheila Crisostomo