The dismissal of the case against former Anakpawis Rep. Ariel Casilao marks the first known effort by a trial judge to interpret the vague crime of “non-cooperation” under the Notifiable Diseases Law. 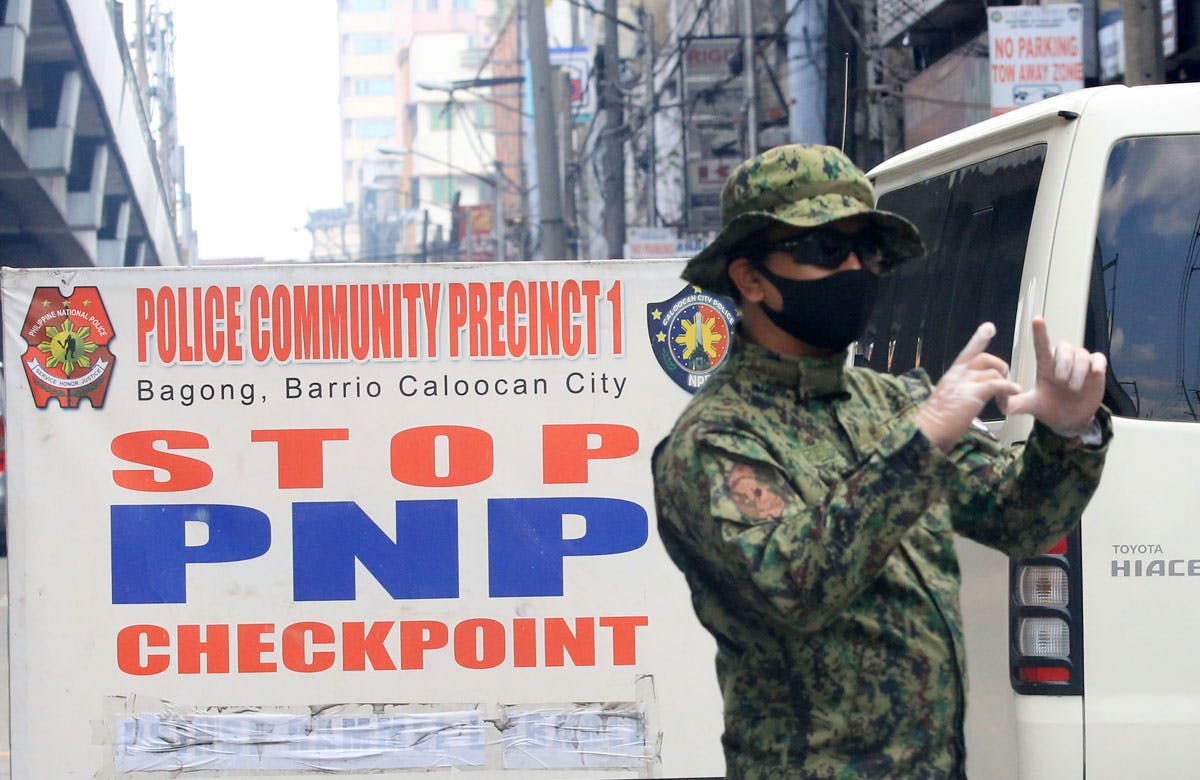 A policeman asks a motorist at a checkpoint in Caloocan City to show a document for identification on May 29, 2020 amid the modified enhanced community quarantine in Metro Manila. Photo by Edd Gumban, The Philippine STAR

A Bulacan court has ruled that traveling outside the residence without a travel permit or a quarantine pass “does not qualify” as “non-cooperation” in violation of Republic Act No. 11332 or the Mandatory Reporting of Notifiable Diseases and Health Events of Public Concern Act.

This is the first known effort to interpret the relatively new law in the context of lockdowns imposed in response to the coronavirus disease 2019 pandemic.

Norzagaray Municipal Trial Court Judge Julie Rita Suarez-Badillo made the pronouncement in her order dismissing the charges against former Anakpawis congressman Ariel Casilao and six volunteers for violation of Section 9(d) of RA 11332.

The so-called Anakpawis 7 were flagged down at the Barangay Bigte quarantine checkpoint on their way to distribute relief goods to the hungry as a result of the enhanced community quarantine imposed by the government since mid-March. The Department of the Interior and Local Government accused them of using an “unauthorized food pass” to travel.

In throwing out the “non-cooperation” charges, the court said: “While such act illustrates defiance to the open directive to observe the enhanced community quarantine, such infraction however does not fall under the prohibited acts of RA 11332.”

The Philippine STAR recently obtained from Anakpawis its copy of the two-page dismissal order dated May 13.

Suarez-Badillo’s interpretation in the Anakpawis case does not bind other courts. Under the doctrine of stare decisis, binding precedents are established in Supreme Court decisions. The judge also did not render the decision after a full-blown trial – the case could not move forward since “the facts charged… do not constitute an offense” under RA 11332.

Yet the case is worth noting in the absence of any decision by the highest court of the land so far.

No definition for ‘non-cooperation’

Section 9(d) of the law, which President Duterte signed on April 26, 2019, prohibits the act of “non-cooperation of persons and entities that should report and/or respond to notifiable diseases or health events of public concern.”

The word “non-cooperation” was neither defined in the law nor the implementing rules and regulations that the Department of Health (DOH) released on March 20 and published in two newspapers (including The STAR) on April 23. The IRR usually clarifies how the provisions of the law should be interpreted to guide enforcers, but in this case, it merely restates what is contained in the law.

The vagueness of the term “non-cooperation” enabled authorities to use Section 9(d) of the law to justify arresting and pressing charges against those deemed to have violated the varying quarantine measures enforced at the local government unit level.

Justice Secretary Menardo Guevarra on March 16 mentioned the act of “non-cooperation” under RA 11332 as among the laws that could be used to go after quarantine and curfew violators (the other offense he cited was disobedience to persons in authority under Article 151 of the Revised Penal Code).

On March 25, the National Union of People’s Lawyers (NUPL) issued a statement pointing out that the term was not sufficiently defined and may be prone to abuse. “Malabo ang probisyong pagpaparusa rito kung kaya’t nagbubukas ito ng samu’t saring interpretasyon at nagbibigay daan sa pag-abuso ng mga kinauukulan. Maaaring makuwestiyon ito sa hukuman (This penal provision is so vague that it is open to interpretation and may give way to abuse by authorities. It can be questioned before the courts),” NUPL said.

On April 19, Casilao and the other Anakpawis members were arrested at the checkpoint. They were freed on bail only on the night of April 22.

Department of the Interior and Local Government Undersecretary Jonathan Malaya claimed the group “conducted an unauthorized travel outside of Metro Manila, and attempted to organize a mass gathering in Norzagaray, Bulacan in the guise of distributing relief goods.”

He said the group placed an “unauthorized food pass in the windshield of their jeep,” although Pamalakaya argued that the pass was issued by Bureau of Fisheries and Aquatic Resources National Director Eduardo Gongona. Malaya also alleged that the group brought “propaganda materials,” although media outfit Pinoy Weekly said the group carried back issues of its magazine. 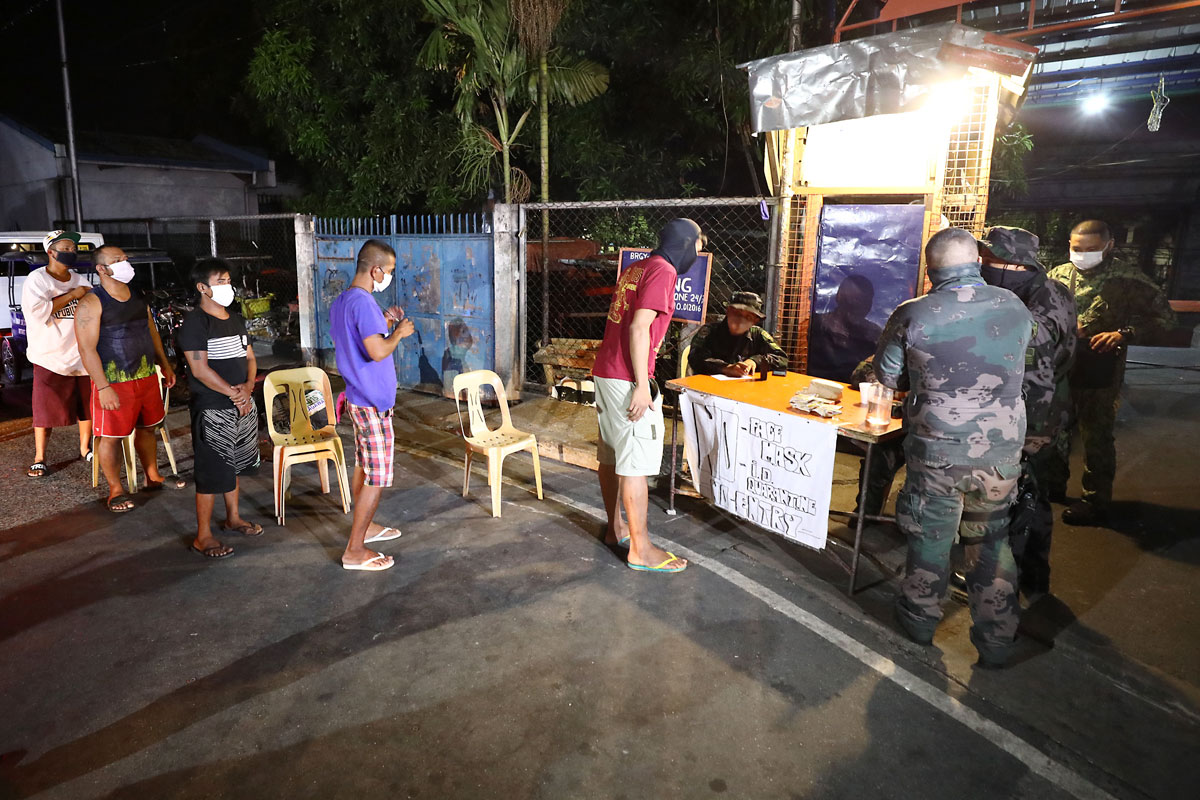 On May 13, the court said “non-cooperation” was not the proper case to file against those who allegedly breach the quarantine or fail to secure travel permits.

The judge deemed the law to be limited to, as the title implies, the “mandatory reporting” of the existence of contagious diseases.

It used the House and Senate bills in the 17th Congress that eventually became the law to provide context for the meaning that lawmakers intended for the word “non-cooperation.”

For one, Section 12 of Senate Bill No. 1647 (authored by former senator Joseph Victor Ejercito and incumbent senator Nancy Binay) “shows that the prohibited act covers the non-cooperation of persons or entities that should report the public health events to the appropriate public health authority.”

Meanwhile, the court said Section 9 of SB 1864 (authored by Sen. Risa Hontiveros) and Section 9(c) of House Bill No. 7134 (sponsored by Quezon 4th District Rep. Angelina Tan) “both suggest the non-cooperation of persons and entities that should report and/or respond to notifiable diseases of health events of public health concern to qualify as one of the prohibited acts.”

Suarez-Badillo thus concluded: “RA 11332 therefore makes obligatory the reporting of a condition… to the (DOH). The law also mandates the cooperation to the response system institutionalized by the (DOH) to address the public health emergency.”

“Hence, RA 11332, refers to mandatory reporting of health information about the notifiable diseases as well as cooperation to the response systems to health related events,” the court added.

Since this was deemed to be the real thrust of the law, the court said: “This specific act, to the mind of the (court), does not constitute or at the very least contemplate the prohibited act under Section 9(d) of RA 1332.”

Casilao said the group felt vindicated and criticized the “failure of judgment by the police to apprehend the volunteers, which was followed by the filing of a garbage case to the court.”

“By simply reading the provisions, it is already clear that they are not applicable against us, but still the PNP had the absurdity to file it,” he said.

The Anakpawis members would still have to face a separate case of inciting to sedition. Casilao was also charged with usurpation of authority because the group allegedly dropped his name even if he was no longer an incumbent member of Congress. He expressed confidence that these charges were “weaker than the first case.”

The STAR asked Guevarra if prosecutors should be guided by the Anakpawis case, but he said he “will check on this case first.”

Guevarra said the Office of the Provincial Prosecutor of Bulacan was still “studying whether they will file a motion for partial reconsideration.”

The justice chief noted that Casilao and the Anakbayan members would still be arraigned on June 24 to face the charges of inciting to sedition and usurpation of authority.

Malaya said he “can’t comment yet” on the question of how the court order might affect the government’s efforts to go after quarantine violators, as he had not yet read it.

Asked if the court order would affect the government’s efforts to go after quarantine violators, Malaya said no.

“It’s just one count. The violations of the Revised Penal Code and the Bayanihan Act are proceeding anyway,” he said. “Meaning, the court saw probable cause and it’s now up to the (Department of Justice) prosecutor to make the case. It’s no longer in our hands.”

Meanwhile, NUPL president Edre Olalia said the dismissal of the case “validates our firm legal opinion for the longest time that these acts or activities are not illegal much less criminal.”

Olalia said prosecutors and judges “should deliver the message to the barangay, police and military that they are shamelessly wrong” about the use of RA 11332 to file charges.

“While not binding in other cases and courts, it proves that there are still competent, prudent and independent judges out there who can provide judicial refuge against silly, mechanical if not malicious charges versus citizens,” Olalia stressed.

“The problem is, you can get arrested illegally, harassed, demonized, thrown in jail and be burdened with such judicial processes meanwhile,” he said.