Experts see COVID-19 cases in the country reaching 40,000 by the end of the month, making it difficult for the government to decide on the quarantine measures needed to curb the transmission while at the same time reviving economic activities. 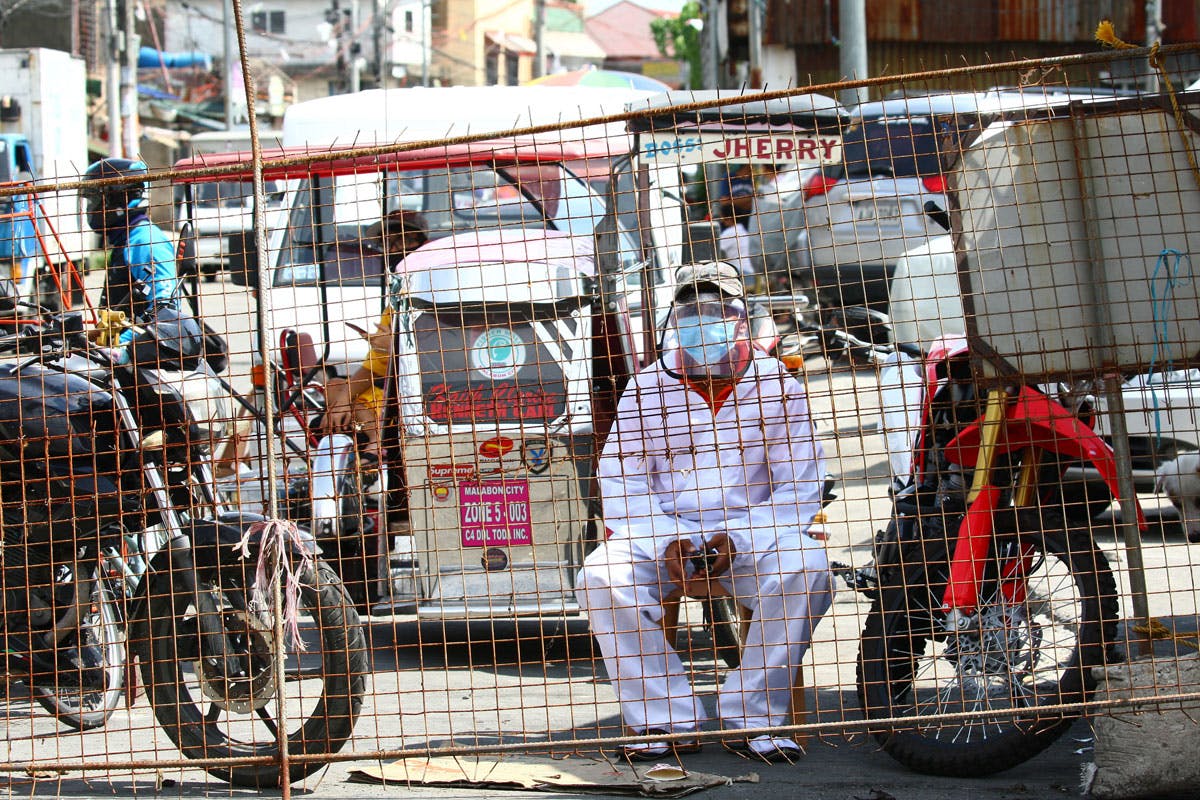 A village official in Caloocan City mans the border of Barangay 12 during the modified enhanced community quarantine in Metro Manila on May 25, 2020. Photo by Michael Varcas, The Philippine STAR

Experts from the University of the Philippines (UP) project that the number of people infected with coronavirus disease 2019 (COVID-19) in the country could hit 40,000 by the end of June given the current rate of community transmission.

“On the assumption that the current r naught of 1.2 percent will not go down, COVID cases could reach 40,000 by June 30,” UP professor Guido David said.

R0 (pronounced r naught) is a mathematical term that indicates how contagious an infectious disease is and its reproduction number. R0 tells the average number of people who will contract a contagious disease from an infected person. It specifically applies to a community that is previously free of infection and whose members have not been vaccinated.

Stressing that there are many factors affecting the transmission of COVID-19, a UP research team – including David – has been monitoring the COVID-19 situation for the past 10 weeks using r naught to measure transmission potential of the virus.

Since last month, David said the COVID-19 infection rate nationwide has gone down. Mild infection comprised a majority of cases while severe and asymptomatic accounted for less than one percent.

David noted that many cities are already winning the war against COVID-19, except those in Metro Manila, which remains the main pandemic battleground, and Cebu.

While the country is coping with the pandemic, David said the situation is not “irreversible” since the virus is still there and community transmission continues.

“As we can see, the cases dropped in April, but it went up again. So there is a chance that it can go up again,” David pointed out in a virtual press briefing.

David said the undiagnosed asymptomatics could spread the virus. The number of asymptomatic cases in the Philippines is low compared to other countries and this may indicate underreporting.

Hypothetically, David stressed, COVID-19 cases in the country could reach as high as 30,000 if more asymptomatic cases are getting tested. He recommended randomized testing to detect asymptomatics.

Aside from the asymptomatics, David said mobility and proximity among people could drive community transmission of COVID-19 in the country.

As of Thursday, June 11, confirmed COVID-19 cases in the country had jumped to 24,175 with the addition of 443 cases.  Of the additional cases, the Department of Health (DOH) said 253 are classified as fresh while 190 are late.

But the DOH also reported the highest new recoveries of 270 in a span of 24 hours. The figure pushed to 5,165 the total number of patients who have recovered from the infection. COVID-related deaths reached 1,036, including nine new fatalities.

DOH Undersecretary Maria Rosario Vergeire said the increasing number of recoveries from the infection clearly showed that the government is on the right track in its fight against COVID-19.

Vergeire attributed the increased recoveries to improvement in testing and health capacity and the management of cases in hospitals.

Based on the DOH’s COVID-19 Situationer released on June 8, most of the confirmed cases as of June 7 were males (12,218 or 56 percent). Most cases were within the 20 to 39 age group. Fifty-six cases (21 females and 35 males) with unspecified age were included in the total.

The average number of days spent in the hospital of those who recovered was 11.

A total of 12,000 (55 percent) were confirmed cases from the National Capital Region as of June 7. The proportion of cases in the NCR decreased from 63 percent since the start of case detection in January up to May 19, to 38 percent from May 20 to June 7.

Meanwhile, cases in Region 7 or Central Visayas increased in proportion from 11 percent to 20 percent  during the same period. On May 4, 123 (38 percent) out of the 323 confirmed cases nationwide (by date of onset) were reported from various barangays in Cebu City. Region 7 recorded a total of 3,442 (16 percent) confirmed cases, the second highest reported in the country.

Region 4-A or Calabarzon has the third highest cases with a total of 1,810 (eight percent) confirmed cases as of June 7. Since the start of case detection until May 19, the proportion of cases in Region 4-A decreased from 11 percent to three percent for the period of May 20 to June 7. 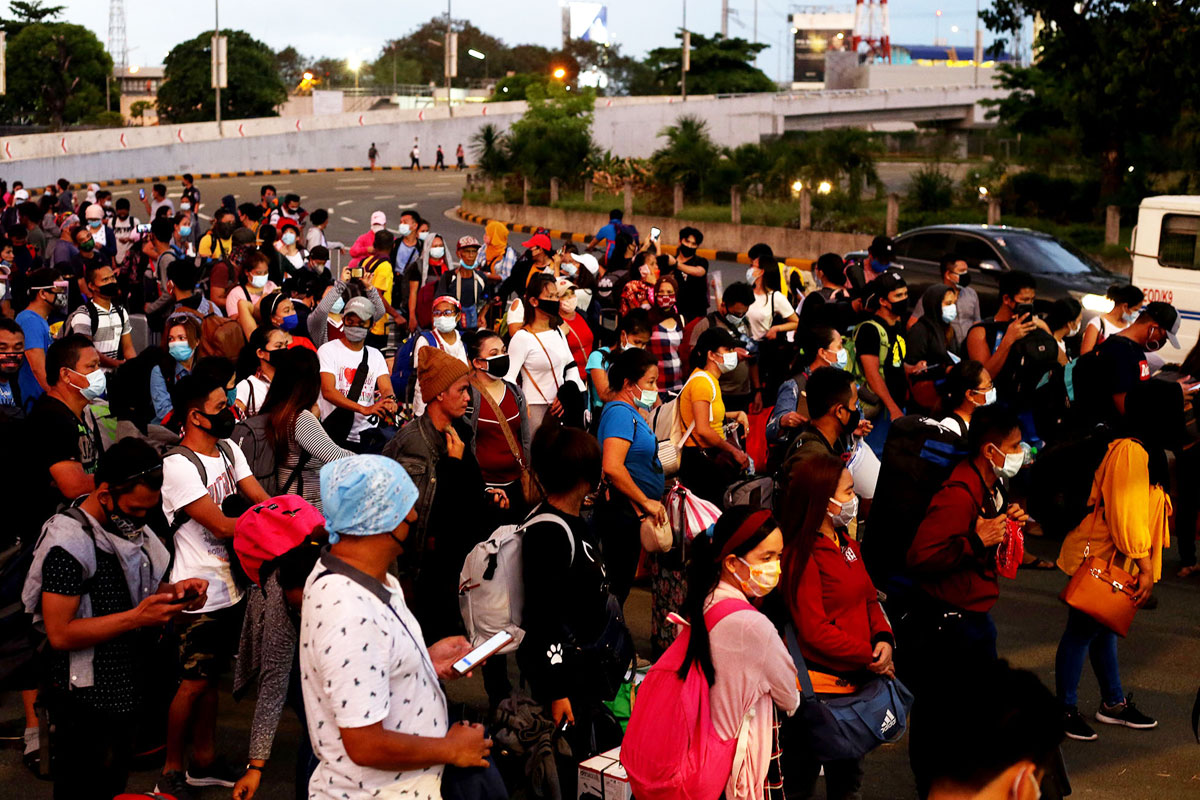 UP professor Ranjit Rye called on the government to improve the management of the pandemic.

“There is still significant community transmission with 1.2 percent. More people can be infected if appropriate measures will not be undertaken,” Rye said.

He cited the case in Cebu, where the current infection rate is at two percent. He emphasized that Cebu requires timely response to stop the transmission.

“We need to scale up testing, treatment and tracing, which is the weakest at this time,” Rye said. “If there is community transmission, left alone or without a response, it could lead to an outbreak.”

He said there should be a concerted effort to bring down the r naught to less than one percent, which was the level during the enhanced community quarantine.

Vergeire said the DOH had revised the protocols and allowed testing for those at high risk of getting infected even if asymptomatic. She maintained that asymptomatic cases are less likely to transmit the virus.

Earlier, the DOH said three indicators would be highlighted in the formatted case bulletin for COVID-19 cases, to provide the public a better understanding of the pandemic and the national response.

Vergeire said the new format primarily differentiates the fresh and late cases to get the real picture of the epidemic in the country.

The new format, which was introduced on May 29, shows the “fresh cases” – test results that came out and were already validated by the DOH’s Epidemiology Bureau in the last three days.

On the other hand, the “late cases” are those whose results came out four days ago or earlier but were just recently confirmed.

The other indicators being closely monitored by the DOH are the deaths, case doubling time and critical care utilization rate. Vergeire said these three other indicators could provide a “clearer picture” of the COVID-19 situation in the Philippines.

She noted that mortality due to the virus has been on the decline since March, thus “assuring the DOH that the healthcare sector’s treatment of the illness has been progressively improving.”

“The number of deaths based on date of death, not date of reporting, has been going down. This is good news, and if it will continue to go down, that is a sign that we are reaching the peak of the epidemic,” she said.

On the other hand, the case doubling time – or the time it takes for the cases to increase twofold – provides an idea of whether or not the transmission of the virus is slowing down.

Vergeire said the case doubling time was recorded at 6.28 days in Metro Manila.  In the past months, it was three to four days. This means that the time it takes for cases to double has become longer at almost one week.

She also underscored that the current critical care utilization rate for intensive care units is 34 percent while it is 18 percent for mechanical ventilators.

Vergeire added that these numbers are also “good indicators” because they mean that the capacity of the health system has not yet been maximized.

The critical care utilization rate mirrors the capacity of the healthcare system to handle severe cases, as seen in how much of the intensive care facilities is currently used, and how much remains available. 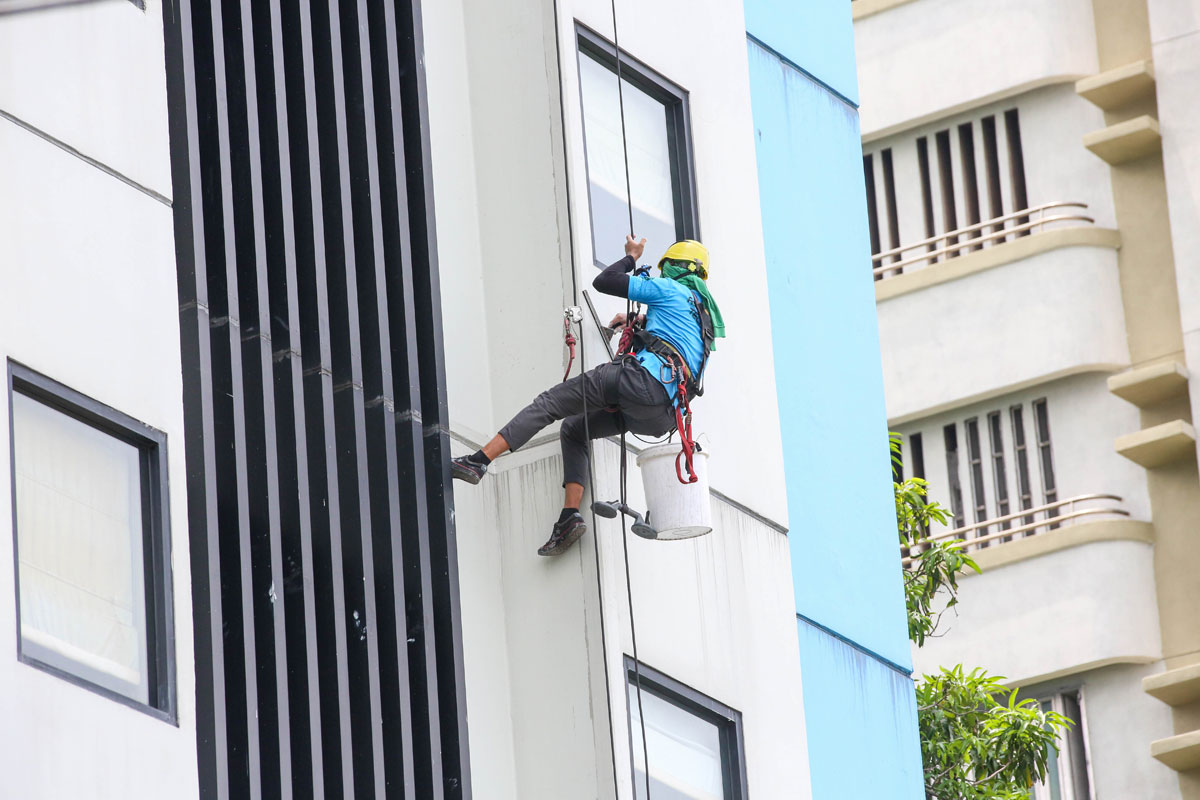 The rising number of COVID-19 cases in the country is not inspiring for the government, which is set to decide by June 15 if quarantine restrictions can be further relaxed.

Since June 1, the NCR has been under general community quarantine along with Pangasinan, Zamboanga City, Davao City, Cagayan Valley, Central Luzon, Calabarzon and Central Visayas. The rest of the country has been under modified GCQ. This will be until June 15.

According to presidential spokesman Harry Roque, President Duterte is expected to announce whether quarantine restrictions will be retained or relaxed further by Monday.

“I would say you are correct in your observation that (the increase in COVID-19 cases) does not inspire relaxation. But the announcement as I said is subject to appeal and will be announced by the President,” Roque said.

The Inter-Agency Task Force (IATF) for the Management of Emerging Infectious Diseases met last Wednesday to determine the next step in handling the COVID-19 crisis.

Roque said the President’s decision would be based on the scientific data presented to him by the task force and the actual reports from the ground.

“I don’t want to preempt the President, but the data won’t lie. So whatever decision will be announced by the President for Metro Manila and Cebu City in particular, that will be based on science.  We are asking for everybody’s patience and understanding,” Roque said.

In the right direction

Still, Roque maintained that the government made the right decision when it relaxed quarantine restrictions all over the country.   The move was an economic decision, he said.

Roque parried criticisms against the government’s move to deviate from the recommendations of UP experts, who made a forecast that COVID-19 cases would jump to 24,000 by June if quarantine rules were eased based on their calculations.

According to Roque, the government has taken into consideration the increase in cases since there is no vaccine yet. “What we were looking at is how we can provide medical assistance to those who will get seriously sick since we also have to balance the situation with our economy,” he explained.

If the lockdown continued, Roque said many would have died of hunger and not COVID-19 because of their inability to return to work.