President Duterte says not wearing a face mask can be considered a “serious crime” as the country is facing a public health crisis due to the COVID-19 pandemic. But he also recognizes that not everyone can afford to buy masks. 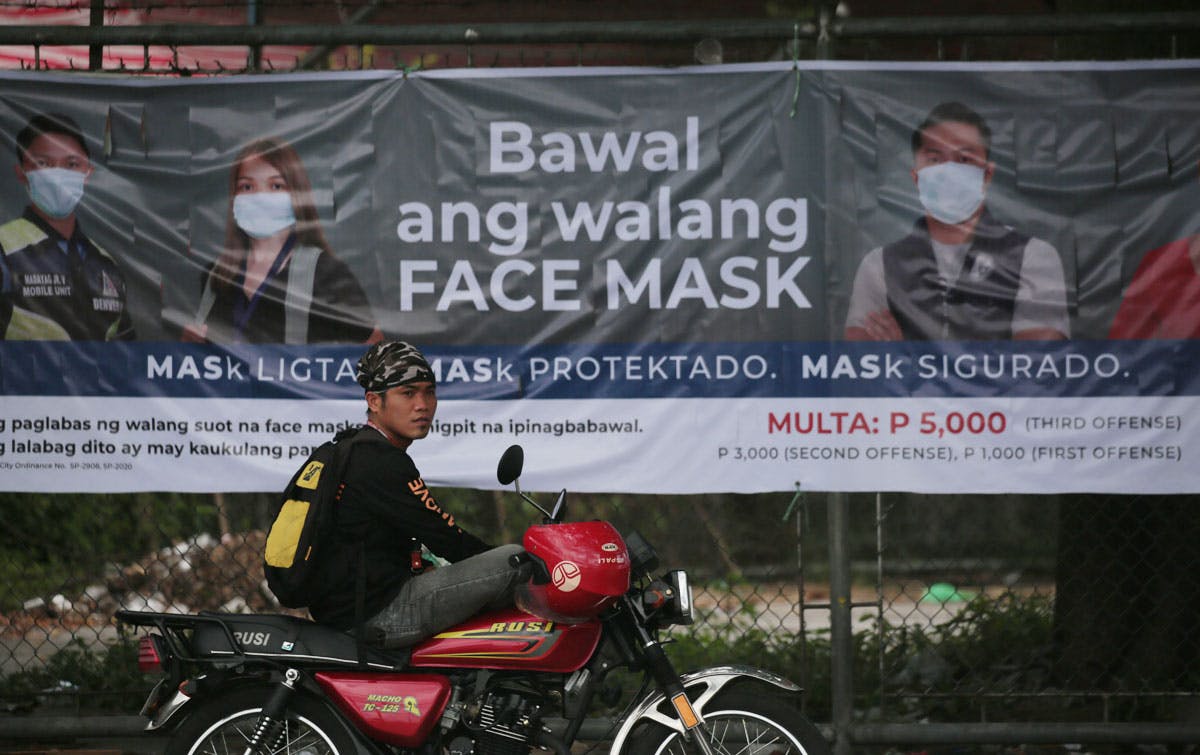 A man rests on his motorcycle parked in front of a public service announcement posted along Luzon Avenue in Quezon City about the need to wear face masks or face penalties amid the coronavirus disease 2019 pandemic. Photo taken on July 21, 2020 by Michael Varcas, The Philippine STAR

The Philippine National Police (PNP) will intensify operations against people who are not observing health and safety protocols, including those not wearing face masks in public places, amid the coronavirus disease 2019 (COVID-19) pandemic.

In a text message, PNP deputy chief for operations Lt. Gen. Guillermo Eleazar said they would double their efforts in compliance with President Duterte’s directive to apprehend and detain individuals who are not wearing face masks in public places.

Records show that 233,172 people have been accosted since March when Duterte imposed a community quarantine to contain the spread of COVID-19. A majority of the violators were from Luzon with 147,446 followed by the Visayas with 46,412 and 39,314 in Mindanao.

Eleazar pointed out that 72,952 or 31.28 percent of the violators were charged in court while the rest were either warned or fined.

He lauded local government units (LGUs) for crafting ordinances imposing fines on quarantine violators as well as the force multipliers for helping the local police units in implementing quarantine guidelines.

Eleazar cited as an example the local government of Navotas, which imposed a lockdown following a surge of COVID-19 cases in the city.

He said at least 2,723 people have been accosted in Navotas in the past five days for violating the city government’s lockdown protocols.

The strict quarantine measures, according to Eleazar, brought positive results for Navotas as the spread of COVID) in the city has slowed down.

Eleazar made the statement as Duterte called on local officials and the police to intensify the arrest of violators of health regulations while the country works double time to contain the pandemic.

Duterte directed Interior and Local Government Secretary Eduardo Año to ensure that the police and local executives will enforce the regulations, noting that these measures can help the government in slowing down the spread of the virus.

During ordinary times, Duterte said wearing a face mask or practicing social or physical distancing could be trivial. But not when there is a public health crisis.

“That’s why we do not have any qualms in arresting people,” Duterte said in a recorded meeting with his officials on Monday, July 20 that was aired on Tuesday morning, July 21.

Duterte invoked public safety in the stricter implementation of the protocols, stressing the need for every individual to wear a face mask as protection against the disease.

He said among carriers, transmitting the virus “can be a serious crime.”

“So we will have to ask our police to be more strict. So hulihin talaga. A little shame would put them on notice forever. Sino ba namang gustong mahuli ka. But if you are brought to the police station and detained there, that would give you a lesson for all time,” the President noted.

Duterte and his officials are being criticized for using the military and police in enforcing protocols related to COVID-19. Critics have cited alleged abuses of the security forces and have expressed concern over the health and safety of those taken to cramped detention facilities.

The President told Año, who is also deputy chief of the National Task Force Against COVID-19, to hold local officials and the police accountable should they fail to step up the campaign to protect the public from COVID-19.

Duterte said local authorities found to be remiss in their duties could be held liable for simple gross negligence if they fail to abide by the orders of the national government. They could also be suspended or terminated. 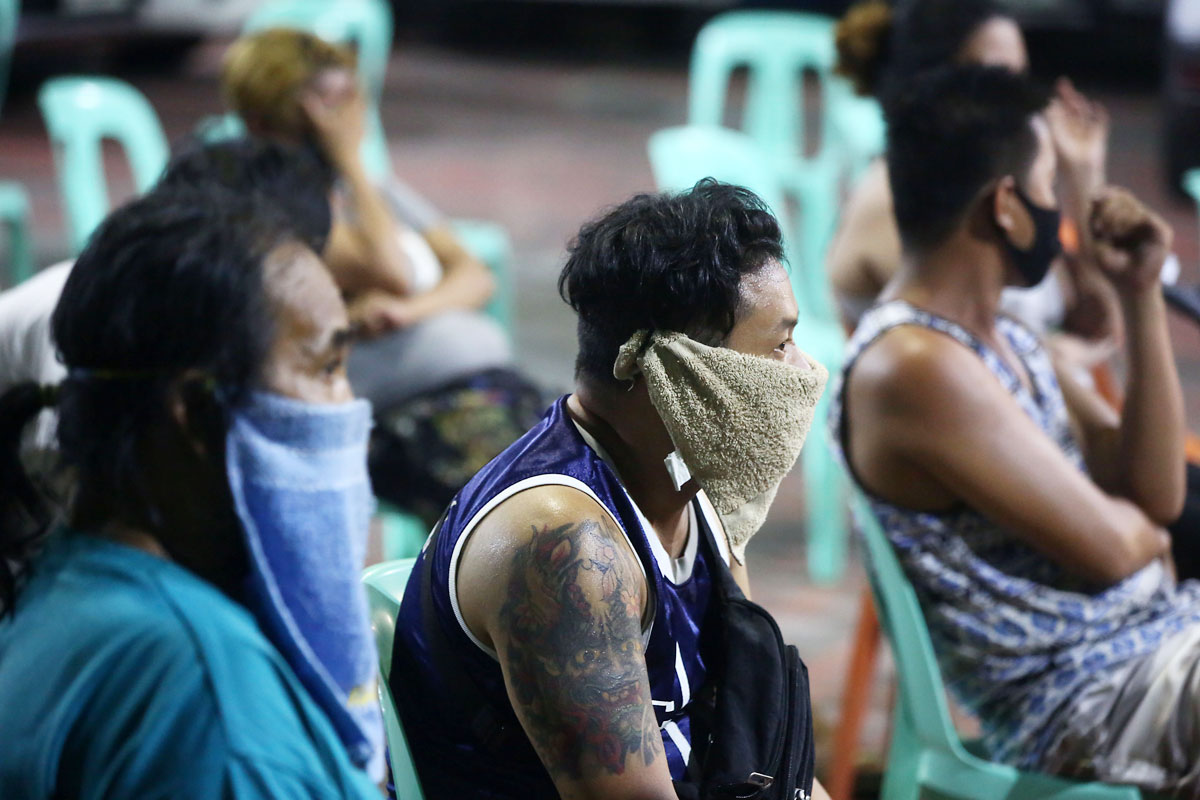 Presidential spokesman Harry Roque said local officials are working on a “unified ordinance” for the implementation of uniform guidelines across Metro Manila and the rest of the country.

At this point, Roque said, “the police can tell individuals to wear masks… ask them to go back to their houses and get their masks.”

Roque explained that without the uniform guidelines, people could only be encouraged to wear face masks.

In his speech, Duterte noted the difficulty of making people wear masks, even as he and Roque cited a survey showing that nine out of 10 Filipinos do comply with the requirement.

The President maintained that he does not like to order the arrest of people, but the health protocols are necessary to save more lives.  “The mayors have to do more,” he said. “They have to take care (of the people).”

During the same meeting with the members of the Inter-Agency Task Force for the Management of Emerging Infectious Diseases, the 75-year-old Duterte said he would like to procure enough face masks to give away free to all Filipinos.

But he lamented that the government lacked the resources to provide free face masks for everyone.

“Ngayon, kung wala kayo, I will try to buy as many as I can afford kung kaya ko, ibigay namin iyan sa inyo libre but wear it,” Duterte said.

He claimed that disposable masks could be worn twice by spraying them with alcohol, or Lysol for those who can afford it. But he said people should hang the masks first purportedly to avoid inhaling toxic substances.

Duterte joked that people could possibly use gasoline or diesel to disinfect their hands and face masks.

“Iyong wala, ibabad mo ng gasolina o diesel, p***** i** COVID na ’yan. Hindi uubra ’yan diyan. Totoo. Kung wala kayo… if you want to disinfect, maghanap ka ng gasolina. Ibabad mo lang iyong kamay mo. Layo mo lang kay baka… huwag sa loob ng bahay ninyo (If you cannot afford it, just soak it in gasoline or diesel… that son of a b**** COVID. It will prove no match. If you don’t have any, if you want to disinfect, look for some gasoline. Submerge your hands but keep it away, not inside your homes).” 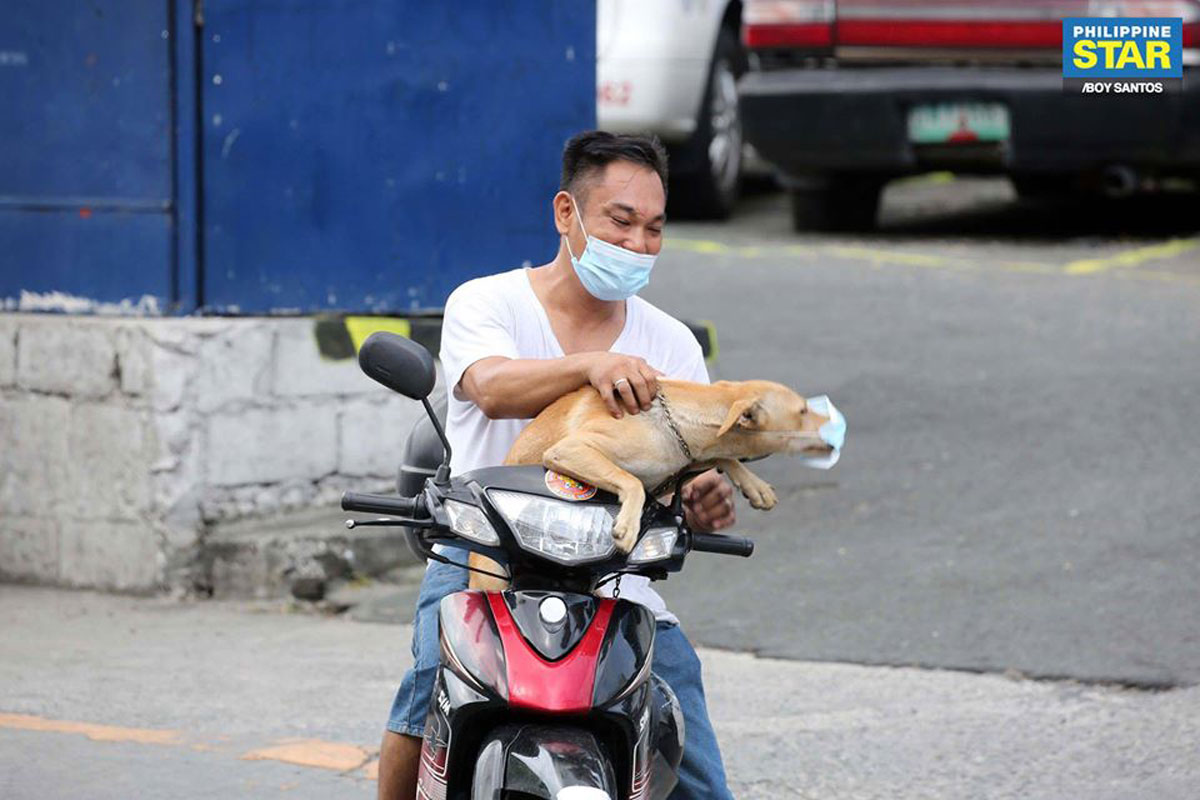 Nine out of 10 Filipinos wear mask

As this developed, Duterte and Roque welcomed a recent survey showing that 91 percent of Filipinos wear masks outside their homes.

The survey was conducted by YouGov in partnership with Institute of Global Health Innovation at Imperial College London.

Among the 29 countries the London-based data analysis group surveyed between June 22 and June 28, the Philippines ranked second with the highest percentage of citizens who always wear masks when they go out of their homes.

The country with the highest percentage is Singapore, with over 94 percent of its population always wearing a mask outdoors.

“While we are discussing face masks, congratulations Philippines. Nine out of 10 Filipinos wear mask once they leave their homes,” Roque said, citing the survey.

Based on the same survey, Roque noted that 83 percent of Filipinos wash their hands with soap and water while 50 percent go out to report for work.

Duterte expressed pride that Filipinos are generally abiding with the minimum health standards such as physical distancing and the wearing of face masks.

In other countries, the President noted that citizens regard the mandatory wearing of face masks as a violation of their freedoms.

Unlike in the United States and certain European countries, Duterte said the Philippines has been able to implement a national policy to address the COVID-19 pandemic.

“There is a raging fight between the federal government and the local states in America. Simply because there are mayors who refused to abide by these rules of (the national government),” Duterte said.

“All experts practically, be it in Europe or America, and the doctors, the eminent doctors… they only have one unison statement: ‘You want COVID to slow down or stop? Wear a mask or do not go out of your house if you do not want to wear one,’ ” Duterte said.

He underscored the need to also observe physical distancing. “There is no other way that we can prevent COVID from transferring from one person to the other, unless we obey.”

“The only thing that’s going our way, in our favor is that we are a unitary type of government and the hold of the central government is different from the United States. They have more freedom there and there are things (that are) no-no and nobody… (compromises),” the President said. 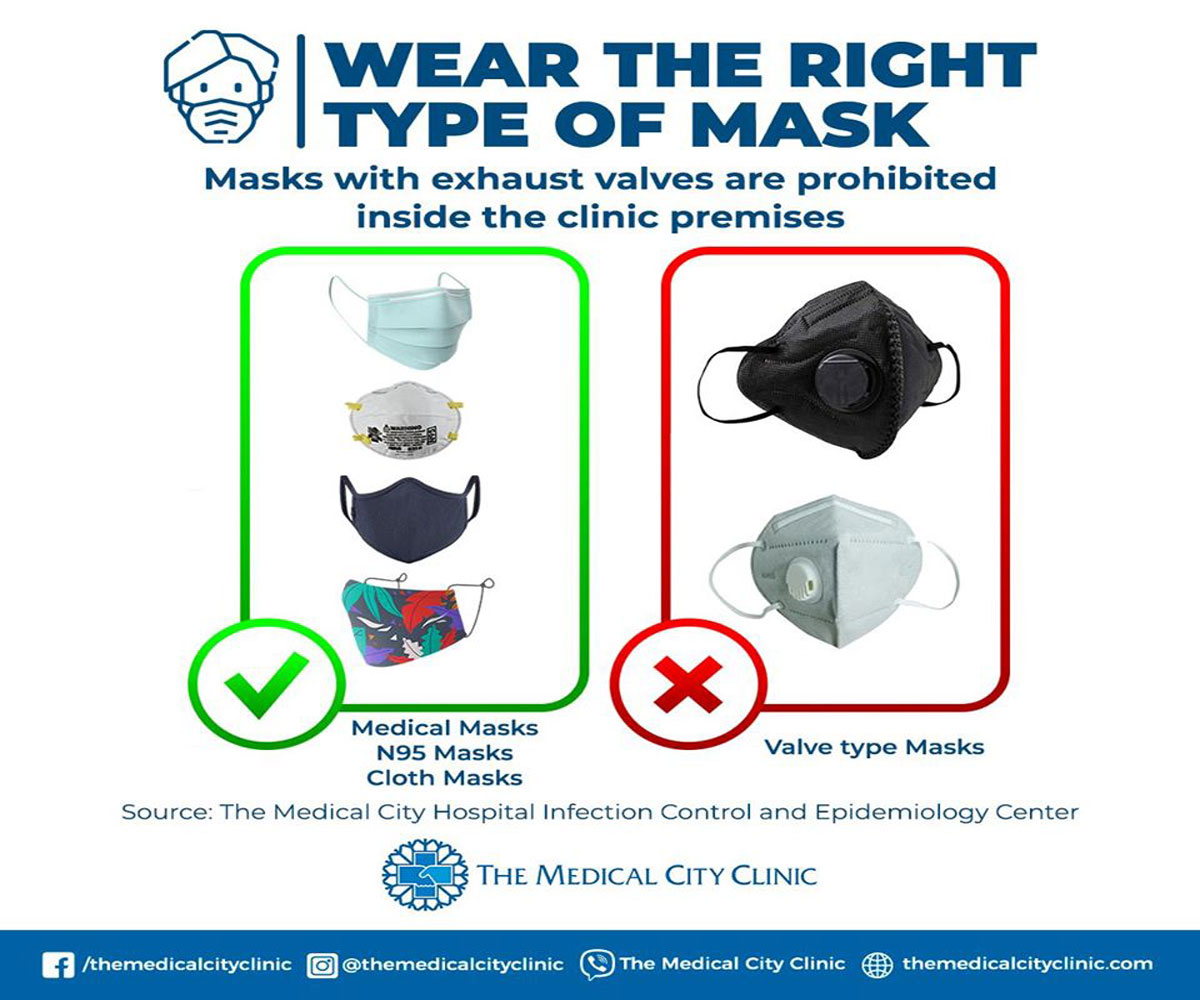 On July 18, the Food and Drug Administration (FDA) called on the public to wear the right masks, saying those with exhaust valves cannot prevent COVID-19 infection.

According to FDA director general Eric Domingo, these masks are intended for industrial use and not for medical or surgical purposes. He said these are commonly used by carpenters or those doing some grinding to prevent them from inhaling dust particles.

He made the statement after The Medical City issued an advisory on July 16 prohibiting the wearing of masks with exhaust valves in the hospital premises.

“While masks with valves are designed to ease exhalation and decrease humidity for the wearer, they do not block transmission of COVID-19 because they allow exhaled air and droplets to escape,” the advisory read.

Domingo pointed out that the valves are not designed to protect a person from inhaling the air being exhaled by an infected person wearing it and, as such, the protection provided by such masks is “one-way.”

“The protection that we want from a mask is two-way.  If you are sick, you will not infect others, and at the same time, if you are well, you will not get the infection from infected individuals,” he added.

The official said cloth masks are better for everyday use than those with valves because the protection offered is two-way.

For hospital use or when caring for a patient in a hospital, Domingo said it is best to use the “medical or surgical grade masks.” – With Sheila Crisostomo