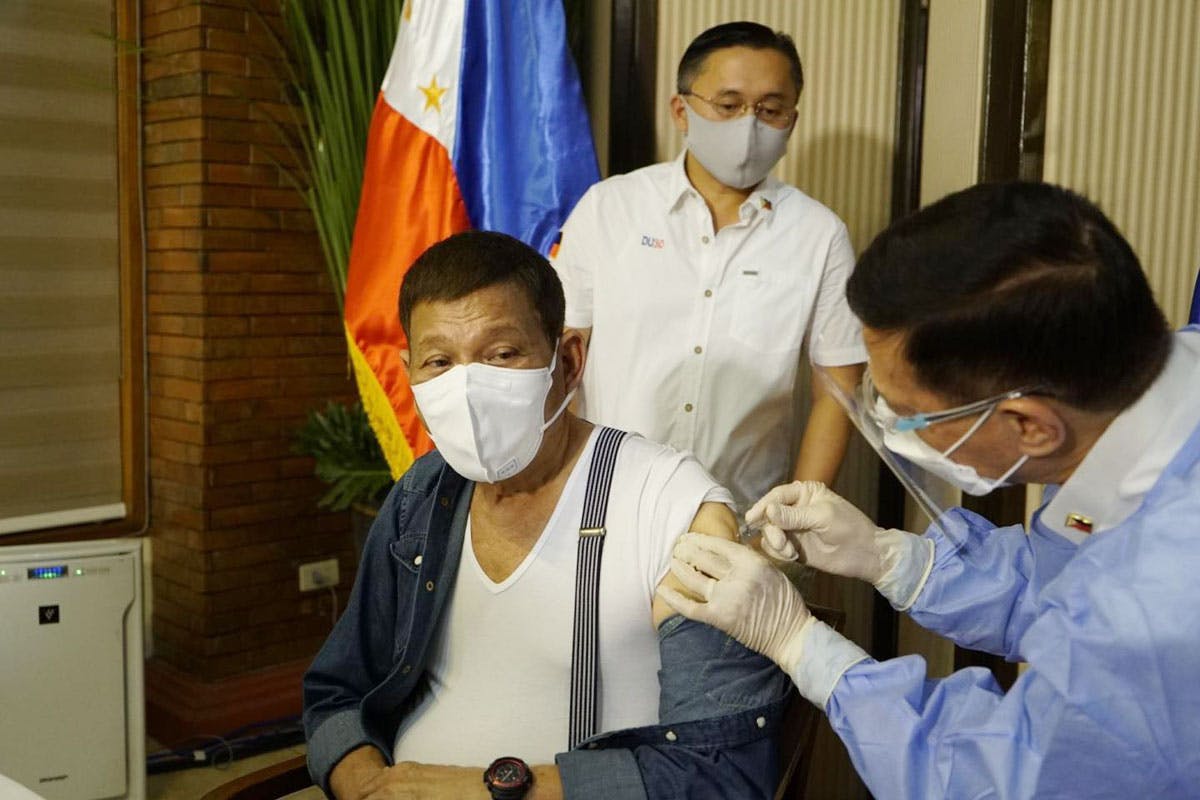 President Duterte was vaccinated on Monday, May 3, with Sinopharm from China as recommended by his private physician.

“I feel good and I’ve been expecting this shot, the vaccination a long time ago. So it was – it took a doctor, my private doctor, a long time to make a decision,” Duterte said during the vaccination done at Malacañang by Health Secretary Francisco Duque III. It was shown live on Facebook using the account of Sen. Christopher “Bong” Go.

The 76-year-old leader said his doctor, whom he did not name, has chosen the jab made by the state-owned Sinopharm as his vaccine, the same serum administered to members of the Presidential Security Group (PSG) late last year that created controversy as the government has not issued any emergency use authorization (EUA) for such injections at that time.

The minute-and-a-half Facebook video showed Duterte joking about something regarding a nurse and those around him laughing.

Sinopharm is one of the vaccines made in China that uses the traditional inactivated or weakened coronavirus as its base.

Go said the President decided to be inoculated not just to protect himself against COVID-19 but to encourage the Filipinos to get vaccinated as well.

Go said the people must be afraid of COVID-19 and not of the vaccines. He called for support for the vaccination program so the country would be able to overcome the health crisis and people would be able to lead normal lives again.

With a reported efficacy rate of about 79 percent, it has no (EUA) from the Food and Drug Administration (FDA), but a compassionate special permit (CSP) was issued to the PSG Station Hospital.

"His first dose was covered by the (CSP) issued to the PSG Hospital by the FDA," presidential spokesman Harry Roque said.

Roque did not mention where the vaccine came from.

In February, veteran journalist and former special envoy to China Ramon Tulfo said he informed Duterte about the Sinopharm vaccine that he took last year.  He said the Chief Executive asked him about the side effects so he told him about Viagra-like effect or the erection every morning that he experienced for two weeks.

Tulfo, who admitted that the Sinopharm shots he got were smuggled,  quoted Duterte as saying that he would write to Sinopharm if necessary to secure shots for him and his family.

In December, the President said a lot of people in the Philippines and almost all of the soldiers had been vaccinated with Sinopharm. These include members of the PSG.

Tulfo disclosed he and the PSG had the same source of Sinopharm shots. He also knows the other government officials who were inoculated but would not name them. "Mayroong Cabinet-level, mayroong senador."

Tulfo said the President's request reached the Chinese Ministry of Foreign Affairs, which supposedly gave the "go signal" for vaccine samples to be sent to Duterte and his family. Tulfo did not see anything wrong with the President's move. "I don't find any irregularity there," he said. "You know, we're now given a choice. Which comes first, the lives of millions of Filipinos or propriety?"

Read more: Mon Tulfo On Sinopharm Vaccine Side Effect: It’s Like Taking ‘Viagra,’ But Only For Two Weeks

Duterte has been widely criticized for prioritizing Chinese-made serums that apparently led to the delays in the arrivals of vaccines made in the United States and Europe.

He recently said that the country owes a debt of gratitude to China for the vaccines following calls for him to make a stand on Beijing’s repeated intrusions in the West Philippines Sea.

Two months after the rollout of the COVID-19 inoculation program, the Department of Health (DOH) said on Monday that public confidence on the vaccines had increased.

“According to our hospital chiefs, the healthcare workers who refused the vaccines before are now informing them that they want to get vaccinated already,” DOH Undersecretary Maria Rosario Vergeire said in a briefing.

Vergeire added the situation was similar in communities wherein people had become open to get the vaccine when they see healthcare workers or their neighbors receiving the anti-COVID-19 shots.

“So we are seeing now that confidence is increasing. That’s why we want to speed up and expand the vaccination to take that opportunity to get the people vaccinated immediately,” she noted.

Last Sunday, May 2, Sen. Panfilo Lacson had advised the DOH to step up the information campaign on COVID-19 vaccination to prevent wastage.

Based on DOH data as of May 1, some 1.93 million doses of COVID-19 vaccines have already been administered to priority sectors.

Of this, 1.6 million people have received their first dose.  On the other hand, 284,553 individuals have completed the two doses.

Vergeire reiterated that of the vaccinated individuals, only 2.1 percent have experienced adverse events.

“To date, there is no fatal event associated with COVID-19 vaccines in the country,” she stressed.

Vergeire said the vaccines available now also could not cause COVID-19 on the vaccinated individuals  because “inactivated viral platform” was the one use in making the vaccines.

“This means that they used dead virus so they could no longer cause COVID-19 infection,” she added.  – With Sheila Crisostomo, Alexis Romero