“We should be there. That area is our traditional fishing ground…We should be there so that we can get our ample share from the bounties of the sea,” Bureau of Fisheries and Aquatic Resources director Eduardo Gongona said. 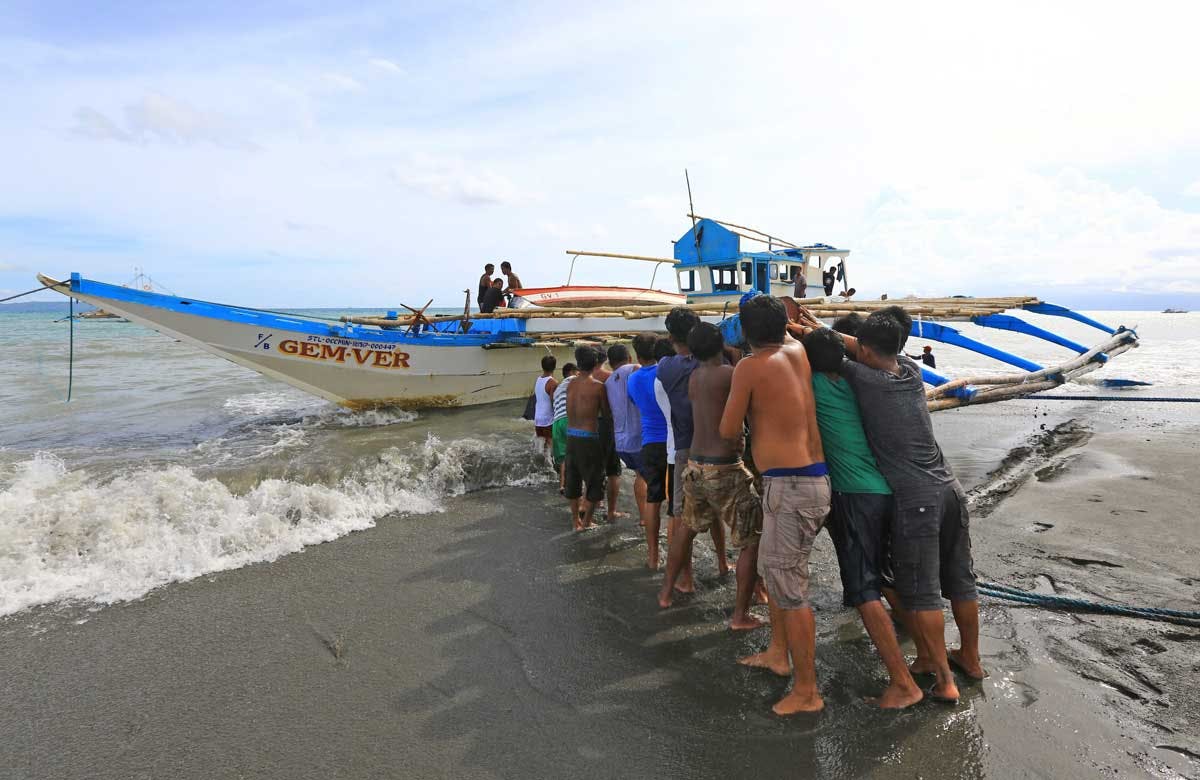 A group of fishermen pull F/B Gem-Ver out of the water on June 15, 2019. Photo by Walter Bollozos, The Philippine STAR

Filipino fishermen should continue plying their trade in the West Philippine Sea (WPS) where they can count on government protection from possible harassment by the Chinese, the Bureau of Fisheries and Aquatic Resources (BFAR) said on Thursday, April 29.

“We should be there. That area is our traditional fishing ground… (and) accounts for seven percent of our total production and that would be 324,000 metric tons (MT) every year,” BFAR director Eduardo Gongona said in an interview with ABS-CBN News Channel.

“We should be there so that we can get our ample share from the bounties of the sea,” he added.

He stressed Filipino fishermen should not be afraid to go to the WPS where BFAR and the Philippine Coast Guard have intensified patrols.

He also noted that most of the fish caught in the WPS are usually supplied to the Metro Manila area.

The BFAR director also emphasized that there are other fishing grounds where the country can get fish supply.

On Wednesday, April 28, the National Task Force for the WPS (NTF-WPS) said that at least five China coast guard ships remained in the country’s territorial waters.

He said earlier that the NTF-WPS was also strengthening its patrol mission in the WPS to stop potential overfishing in the area.

Last week, the Department of Agriculture (DA) through the BFAR said it is still finalizing its study on IUUF in the WPS.

“The DA-BFAR looks at the ‘West Philippine Sea issue’ in general terms, that is, in the area of IUUF activities by poachers – be they from China, Taiwan and Vietnam – and their ‘illegal presence’ wherever in the Philippine exclusive economic zone (EEZ), or simply within our country’s territorial waters,” Agriculture Secretary William Dar said in a statement.

The BFAR also said it is offering various assistance to fishermen in coastal communities in the WPS.

“In provinces and coastal communities facing the West Philippine Sea, DA-BFAR, through its regional offices, has been providing the necessary interventions under programs like fisheries development, fisheries regulation and law enforcement, and fisheries extension program,” the BFAR said in a statement earlier this week.

“DA-BFAR will continuously enforce programs that will benefit our fisheries and aquatic resources and the fisherfolk in coastal communities along the West Philippine Sea,” BFAR said.

Senators, meanwhile, said the Philippines must maintain its firm stand against Chinese intrusions into Philippine waters despite China’s occasional show of friendliness.

In a televised talk to the nation on Wednesday night, April 28, President Duterte said there will be no withdrawal of naval and coast guard patrols in the WPS despite calls from Beijing, insisting that the country’s sovereignty over the waters is non-negotiable even if China has been a “good friend” to which Filipinos “owe a debt of gratitude.”

In particular, Duterte mentioned the COVID-19 vaccines donated by China to the Philippines. 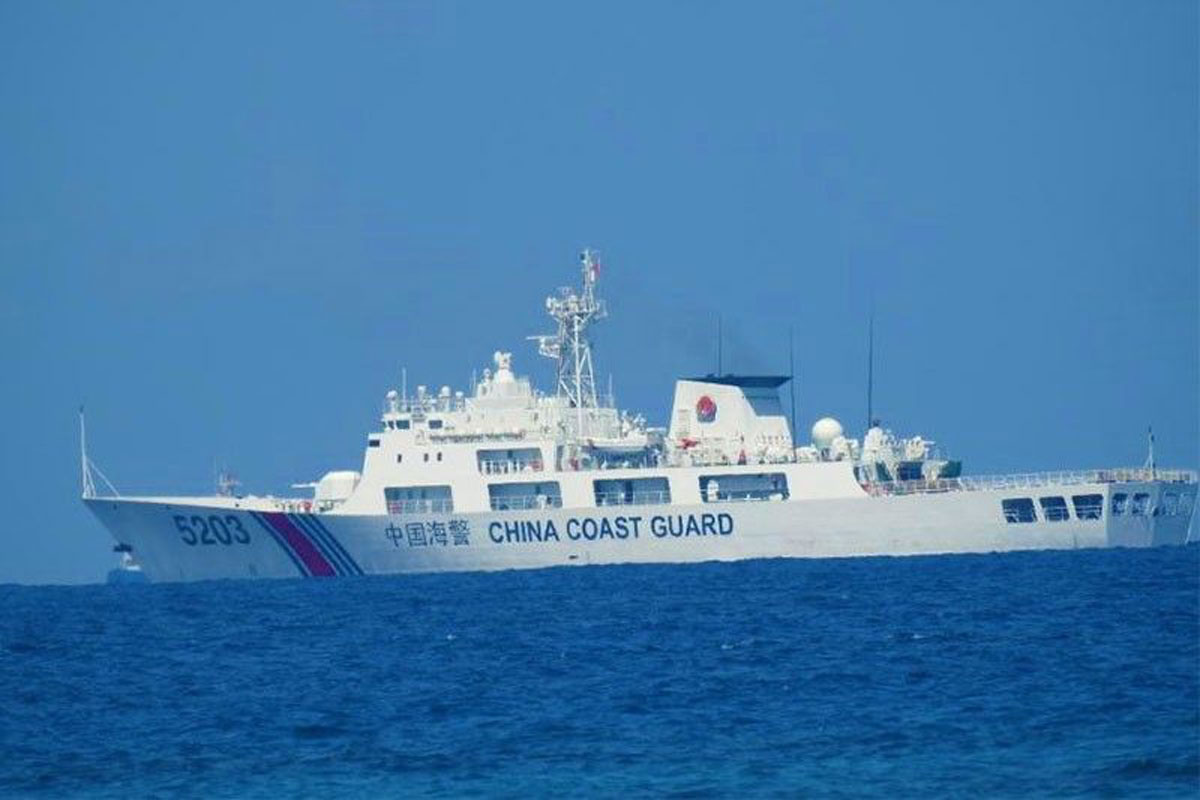 “We must remain resolute in protecting our maritime domain in the WPS,” Sen. Grace Poe said. “As we continue to raise our voices against the threats to our waters, our government must not renege on patrolling WPS to ensure that Filipino fishermen are secure as they venture into the common fishing grounds for livelihood.”

“Our presence in the West Philippine Sea is an unyielding display that we are standing our ground on what is ours and securing our people’s productive access to our marine resources,” Poe added.

Sen. Risa Hontiveros emphasized the country is not indebted to China even with its COVID-19 vaccine donations.

“We are not indebted to China. Our right to the West Philippine Sea is not a substitute for vaccine donations,” said Hontiveros. “In fact, China is indebted to the Philippines for the billions worth of natural resources it has destroyed.”

Hontiveros said almost P800 billion has been lost by the Philippines due to China’s reckless activities in Philippine oceans.

Sen. Richard Gordon  reiterated the need for the country to adhere to the Constitution in asserting its sovereignty.

“Let us be guided by the Philippine Constitution which is the bedrock of our nation, of our institutions and of our democracy,” said Gordon, citing Article 2, Section 2 which states that “the Philippines renounces war as an instrument of national policy, adopts the generally accepted principles of international law as part of the law of the land and adheres to the policy of peace, equality, justice, freedom, cooperation, and amity with all nations.”

Gordon also pointed to the need to increase coast guard patrolling and monitoring of the Philippine archipelago, with all the islands and waters embraced therein, and all other territories over which the Philippines has sovereignty or jurisdiction.

He also slammed Beijing’s continued creeping occupation of the WPS Sea while at the same time posing as a friend to the Philippines: “China should be reminded of the Chinese proverb – ‘a good neighbor is a priceless treasure.’”

Sen. Christopher “Bong” Go said Duterte was right about stepping up patrols in the WPS. “Our vessels have every right to be in the West Philippine Sea, especially those areas under our exclusive economic zone,” Go said.

“The President is the chief architect of the country’s foreign policy. Having known him for more than two decades, I am confident that the President always has the overall interest of the Filipino people in mind,” Go added. “As a legislator, I wish that all disputes in the West Philippine Sea would be resolved through orderly and diplomatic talks. The role of diplomacy is important here and it is important that we are open to orderly and honest dialogue with other countries.”

Go stated both sides should continue to demonstrate their commitment to peaceful settlement of disputes, consistent with international obligations and duties as responsible members of the international community.

“And while the whole world wants to get past the current pandemic, it is better that countries continue to work together to eliminate COVID-19 and not increase misunderstanding,” Go said. “Like the Filipinos, today’s nations need to work together to easily overcome the crisis as a united humanity.”

Meanwhile, militant fisherfolk group Pambansang Lakas ng Kilusang Mamamalakaya ng Pilipinas (Pamalakaya) said it is China which owes the Philippines a “great debt” and not the other way around.

“We are not indebted to China, it’s them who owe us trillions due to massive destruction of corals and marine resources in the West Philippine Sea. President Duterte takes his puppetry to a whole new level by using our sovereign territory as a bargaining chip to acquire Chinese vaccines and economic loans and investments,” Pamalakaya said in a press statement on Thursday.

“Mr. Duterte is being censored with China’s vaccine diplomacy and false promises of economic investments at the expense of our fishing rights and national sovereignty. His stark kowtowing to China is a betrayal to the national interest and the Constitution that he has sworn to uphold,” Pamalakaya national chairperson Fernando Hicap declared. – With  Cecille Suerte Felipe,  Elizabeth Marcelo