How could the Department of Social Welfare and Development “claim a 94% physical accomplishment of its distribution” of cash assistance, “when it has disbursed only 80% of the funds?” Sen. Panfilo Lacson asked, noting: “Something doesn’t add up.” 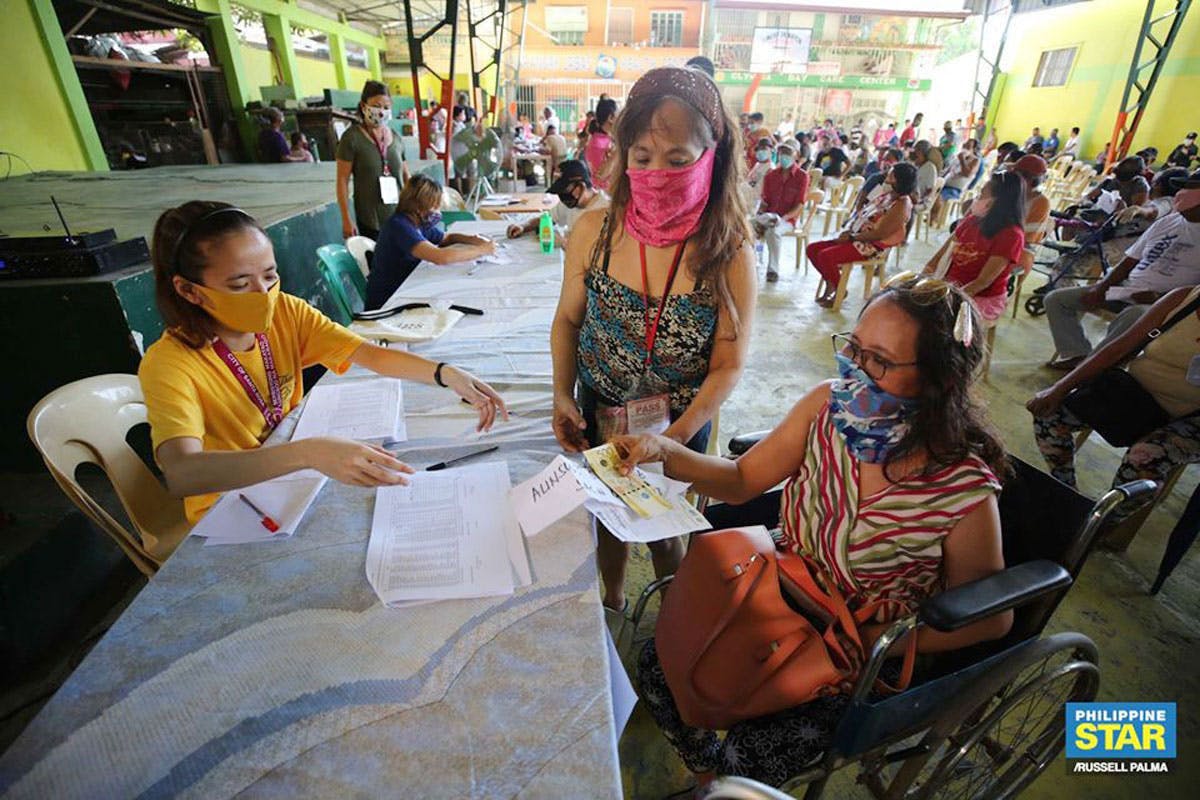 A wheelchair-bound resident of Barangay Labas in Sta. Rosa, Laguna is assisted as she claims her cash aid on May 7, 2020 under the government’s Social Amelioration Program as lockdown was imposed amid the COVID-19 pandemic. Photo by Russell Palma, The Philippine STAR

Senators want the Department of Social Welfare and Development (DSWD) to explain the conflicting information it provided at a recent hearing on its budget, regarding its financial assistance or ayuda to Filipinos most affected by the COVID-19 pandemic.

Sen. Imee Marcos, who presided over the DSWD budget briefing at the Senate on Tuesday, Oct. 12, said the DSWD should provide senators with a “clear report” on how much was actually obli-gated for special amelioration program (SAP) 1 and 2. The DSWD is seeking a budget of P191.4 billion for 2022.

“Out of this obligation, how much was really remitted? Too many people are saying they did not receive anything while others got double. What’s the real score?” Marcos asked.

“We are asking the DSWD for an explanation. Why did they give conflicting answers during the briefing when only numbers were involved? And their own numbers did not tally! Hopefully, when they come back next week, they’ll be able to explain better,” she said. “This is important because of Delta and other variants, that we may need one or two more rounds of ‘ayuda’ – and that’s already beyond the budget. How will you augment the department’s new budget if the previous computations are not in order?”

Sen. Panfilo Lacson also questioned DSWD’s report on its financial assistance. “How could the DSWD claim a 94% physical accomplishment of its distribution of Social Amelioration Program funds, when it has disbursed only 80% of the funds? Something doesn’t add up,” Lacson said.

“The DSWD’s latest data showed that the agency was able to distribute SAP to 717,372 out of 761,259 target beneficiary families. That would constitute a 94.23% accomplishment as of Aug. 31, 2021,” Lacson said in his interpellation during the hearing.

“Yet, according to the same report, the DSWD has disbursed just about 80% of the funds for the SAP,” he added.

DSWD’s Hannah Carcido explained that the DSWD adjusted its targets, stating that the target-beneficiaries in January 2021 totaled 855,597 instead of 717,372.

Lacson also urged the DSWD to learn from its “poor planning,” citing its decision to tap the nearly bankrupt Starpay.

It was found out that the beneficiaries either had no mobile phones or had defective ones.

Lacson also said many local government units (LGUs) had encountered problems distributing SAP as they had been provided outdated DSWD data dating back to 2015.

“Some barangay chairmen agreed among themselves to just redistribute the P5,000 to P8,000 accordingly because the list provided by the DSWD central office was outdated,” Lacson said.

“They wanted to adapt to the situation on the ground. We cannot fault the LGUs,” he added.

“The issue of the DSWD awarding a contract for ayuda distribution to an unknown e-wallet service provider with hardly any track record in large-scale transactions is indeed reminiscent of the Pharmally mess,” Bayan secretary-general Renato Reyes said. “How can an app with less than a million downloads at the time, and with no track record, be chosen over other service providers?”

It was also revealed at the Senate hearing that out of the six to seven million SAP beneficiaries under the Starpay contract, only 800,000 downloaded its app.

“And what about the admission of DSWD that Starpay failed to distribute as much as P8 billion in SAP? That is aid for hundreds of thousands of families that was not utilized,” Reyes said.

“Shouldn’t there be sanctions or penalties imposed on Starpay? Failing to distribute P8 billion in aid is a serious matter, considering so many were going hungry and jobless at the time,” he added.

Reyes also raised the issue of several beneficiaries under Staypay having to do over-the-counter transactions wherein they had to pay service fees.

“If five million beneficiaries transacted over the counter, at P50 per transaction, that’s P250 million in fees,” Reyes pointed out.

“And what about the interest Starpay earned from parking the unused funds in a private bank? Shouldn’t this merit an investigation by the authorities, considering a private firm earned interest from money that was not theirs?” he added, slamming the DSWD for defending a questionable transaction instead of launching an internal investigation. – With Elizabeth Marcelo