The National Task Force to End Local Communist Armed Conflict believes that some groups are exploiting the community pantries, but other government officials stressed these initiatives must be left alone unless organizers are violating the laws.

Malacañang, the Department of the Interior and Local Government (DILG), the Philippine National Police (PNP), the Department of Justice (DOJ) and three Metro Manila mayors all said on Tuesday, April 20, that community pantries may continue their operations even as the National Task Force to End Local Communist Armed Conflict (NTF-ELCAC) announced the profiling of people behind these initiatives would have to be conducted.

Ana Patricia Non, the person who started the community pantry along Maginhawa Street in Quezon City with a simple bamboo cart and carton sign, said she feared for her safety after three police officers asked for her contact details and whether she was affiliated with any organization.

Non said she only had good intentions when she made the move, but now she could no longer walk by herself to the community pantry at 5 a.m. because of red-tagging. She confessed that what happened was saddening as she appealed to those criticizing the organizers of community pantries not to think ill of what they are doing.

The red-tagging of the community pantry organizers stemmed from two posts of the NTF-ELCAC on its Facebook page on Monday night accusing those behind the initiatives of communist recruitment.

In one post, the task force long accused of tagging activists as communists shared a Facebook post by “Peace Philippines” that used the hashtag “#notocppnpandf” alongside a quote card accusing the community party organizers of being communists.

While denying that the government is red-tagging organizers of community pantries, NTF-ELCAC spokesman Lt. Gen. Antonio Parlade admitted on Tuesday that the task force is conducting “background check” on them.

Parlade pointed out that certain leftist groups have also organized their own community pantries to promote their agenda.

Asked what propaganda the certain groups were allegedly spreading, the military official replied that there were a lot of social media posts stating that the people are hungry and in need of more aid because of the government’s ineptitude. “May sinasabi sila na gutom ‘yung mga tao dahil sa kapalpakan ng gobyerno. Marami dyan naka-post sa social media.”

Parlade stressed that in the coming days, the NTF-ELCAC will identify what groups were copying the community pantries to spread propaganda.

Badoy questioned why there are calls to oust President Duterte from some organizers if the intention was only to provide food to the people. She said Duterte was elected under the Constitution and supported by many Filipinos.

Non said she decided to pause the operation of Maginhawa community pantry to ensure the safety of the volunteers, lamenting that they would not be able to distribute the goods that they prepared because of the red-tagging.

Following the developments, Malacañang – through presidential spokesman Harry Roque – said authorities should leave the community pantries alone unless their concern is about health protocols not being observed.

But Roque is also leaving it up to NTF-ELCAC to decide whether it should stop making accusations against community pantry organizers.

He noted the President welcomes all initiatives the can be of help to the people and that the pronouncements of NTF-ELCAC are part of the free marketplace of ideas.

Roque expressed belief the public will always support community pantries no matter what others say as long as the people are benefiting from it.

"We respect the bayanihan (communal spirit) of our countrymen that was displayed through our community pantries and our only interest is to ensure minimum health standards in the community pantries," Roque said in a press briefing.

DILG Secretary Eduardo Año said he did not order the PNP to look into the community pantries around the country.

According to Año, the community pantries has been a traditional practice among Filipinos as part of bayanihan culture and spirit especially in times of calamities.

They just come in different names such as food banks, soup kitchens, among others.

He said many Filipinos have been doing acts of kindness since last year.

“As long as the intention is good and without political color, it should be encouraged and supported. Since this is a purely voluntary and private initiative, we should not interfere except to ensure that minimum health standards are complied with. Hence, organizers must adhere to existing laws and local ordinances especially those issued to prevent the spread of COVID-19,” Año underscored.

DILG spokesperson Undersecretary Jonathan Malaya denied there was any order to intervene with the community pantry efforts by red-tagging them. The DILG is part of the NTF-ELCAC.

Malaya also appealed that politics be set aside in this voluntary initiative in the communities.

PNP chief Gen. Debold Sinas also declared the police will not interfere in the operations of the community pantries, and that there is no profiling involving organizers.

Sinas said they never interfered in other similar projects in 2020 where some farmers' organizations and local government units gave their surplus produce of fruits and vegetables to poor communities in Metro Manila. 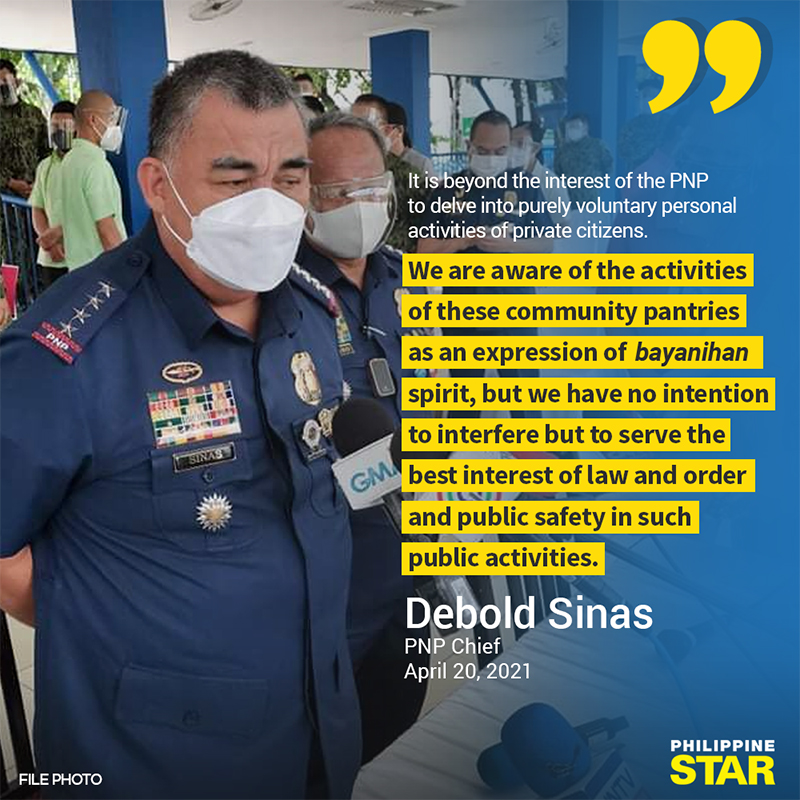 DOJ Secretary Menardo Guevarra also called on law enforcers not to interrogate people who are setting up community pantries and doing acts of kindness.

Guevarra said law enforcers should not question the motives of these people, unless they have reason to suspect that these individuals are committing acts that are against the law.

“A person voluntarily doing an act of kindness and compassion toward his neighbor should be left alone,” he said.

Quezon City Mayor Joy Belmonte assured Non and other like-minded individuals that the city government is fully supporting the initiative.

As part of the Filipinos’ bayanihan spirit, Belmonte said the city government will  “ensure that the organizers and beneficiaries” of community pantries remain safe and unimpeded.

The mayor said she has ordered an investigation into the experiences of Non and the volunteers, including repeated requests for contact information and the sharing of materials that red-tagged community pantries on the social media page of the Quezon City Police District (QCPD).

During a press briefing, Non expressed gratitude to Belmonte for her assurance regarding their safety. She also noted the support of the city government since last week.

Belmonte said she will also meet with the commander of the police station with jurisdiction over Maginhawa to further discuss security issues involving community pantries.

“For several days now, our Task Force Disiplina and barangay leaders have assisted in maintaining peace and order in the Maginhawa community pantry,” the mayor said.

“They are only there to help remind the public about observing minimum health standards and to assist in controlling any crowds that may form. Task Force Disiplina is instructed to do the same for any other community pantries in the city should barangay personnel need additional assistance,” she added.

QCPD chief Brig. Gen. Antonio Yarra said he “does not and will never allow alleged red-tagging” and that the post originating from the Facebook Page of Peace Philippines is now being verified along with the legitimacy of the youth organization.

The QCPD expressed its “sincere apology” for the inconvenience that the inadvertent post could have caused and reassured Non of her safety and protection.

Mayors Francisco “Isko Moreno” Domagoso of Manila and Rex Gatchalian of Valenzuela also underscored that community pantries are allowed in their jurisdictions.

Moreno also said that no permit is needed for community pantries in the city.

MPD district director Brig. Gen. Leo Francisco explained that the filling up of forms was just voluntary and that it would help police identify volunteers in the community.

“We need to know the persons and organizations as the case may be who will voluntarily be our partners. That is why we have to know some information about them for security reasons,” Francisco said.

Marikit Arellano, organizer of a food pantry in Pandacan, Manila said two police officers asked them to fill up forms asking for their names, contact information, occupation, even family background in case of emergencies. 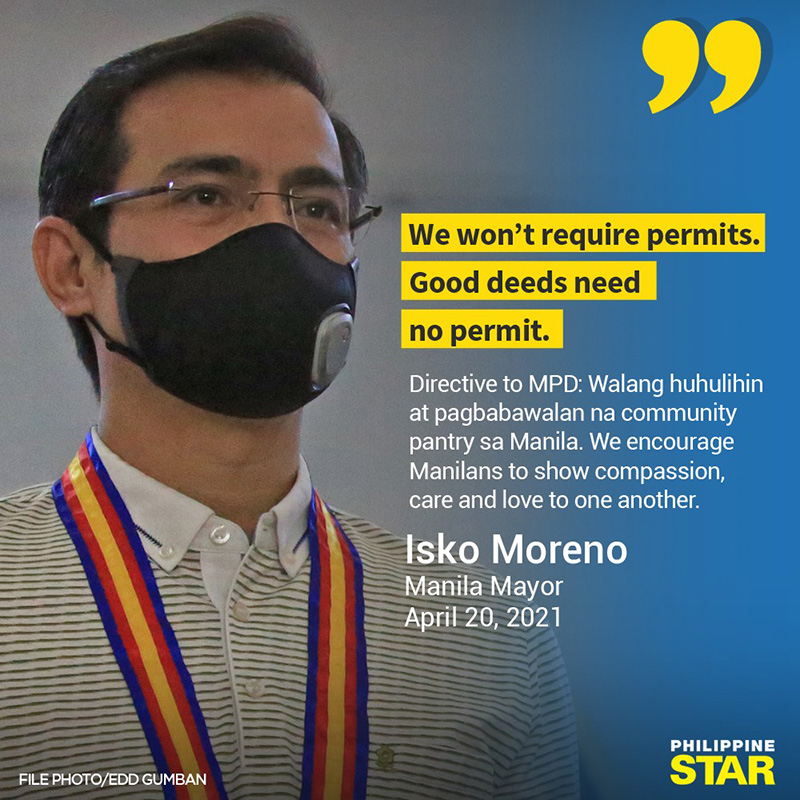 As to the issue of whether barangay permits are required before community pantries can be set up, Año said they should consult with the concerned local officials.

“The PNP and/or local officials may just come in if there is any violation of law, if there are complaints from the community, or if the organizers seek their help. The LGUs (local government units), barangays and the PNP are ready to provide utmost assistance to ensure orderly distribution to the public,” Año added.

Speaking to ABS-CBN News Channel on Tuesday, DILG Undersecretary for Barangay Affairs Martin Diño said organizers of community pantries may need to secure barangay permits now that the movement has inspired others to set up communal kitchens in their communities.

Diño added the community pantries should not be treated differently from the other relief distribution efforts that need to go through clearance.

While the intention is noble, Diño emphasized that social distancing protocols have been violated as people lined up to get food supplies from the community pantries.

Diño took back his position on the matter hours after the television interview.

Guevarra also said organizers of community pantries are not bound by law to fill out forms.

“Organizers of community pantries have no legal duty nor are under any compulsion to fill out any forms, as these are not considered business, much less illegal activities,” Guevarra added.

He also did not believe lawyers need to be present along with the community pantries’ organizers.

Gatchalian assured residents that community pantries are allowed in Valenzuela without the need for special permits.

On Twitter, Gatchalian said he is giving clearance for residents to put up community pantries as long as minimum health protocols are observed.

“In Valenzuela, the community pitching in to be part of the solution is most welcomed,” Gatchalian said.

He told residents to report to him any untoward incidents if they set up a community pantry for the neighborhood.

“Just set it up. If somebody gives you trouble, let me know. Ako bahala sa kanila,” Gatchalian said.

The mayor reminded his constituents to comply with minimum health protocols and to ban minors from going to the pantries. Community pantries are not allowed to be set up during curfew hours, he said.