An infrastructure-oriented think tank alleged that the controversial project has no environmental compliance certificate or ECC as mandated by law, and is possibly tainted with corruption. 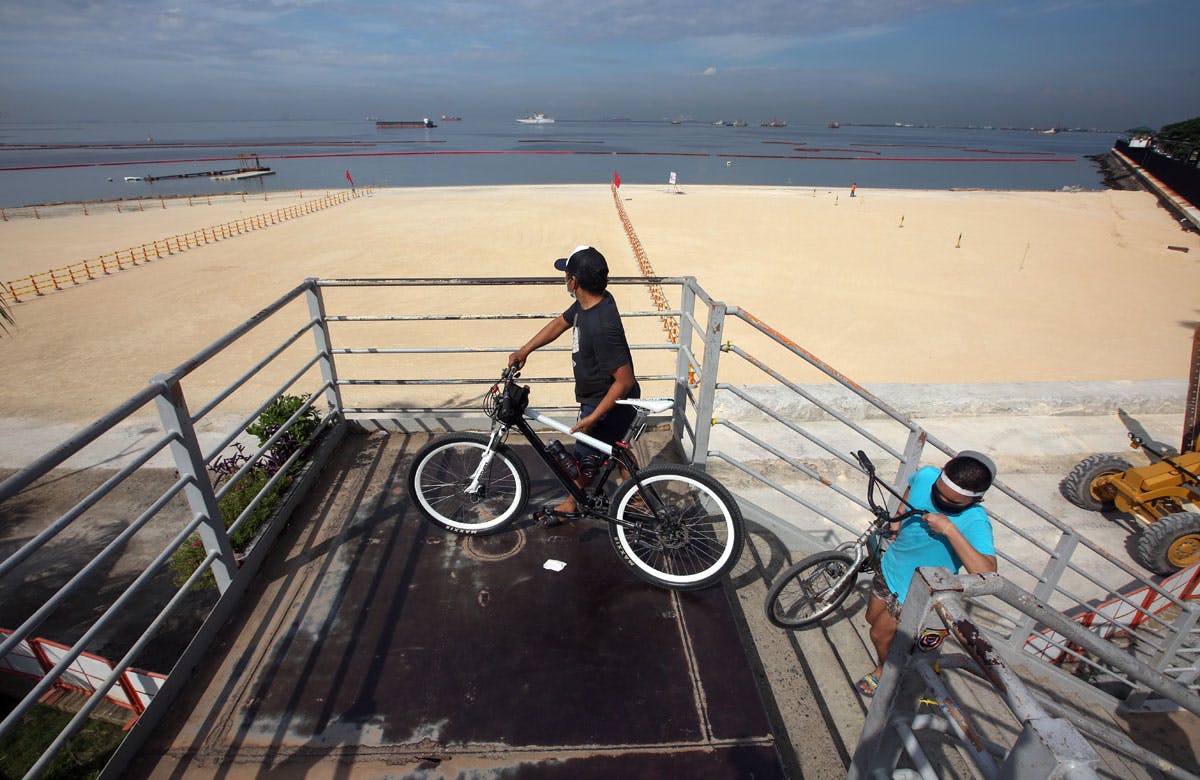 Bicycle riders take a look at the ‘white beach’ along a portion of Manila Bay from the overpass of Roxas Boulevard on Sept. 22. Photo by KJ Rosales, The Philippine STAR

Despite concerns over the alleged health risks it poses and the timing of its implementation, the Manila Bay “white beach” has drawn praise from President Duterte, who said that people are now enjoying the beautification project.

“Let us begin by congratulating Secretary Cimatu. You know, I remember that meeting and I think everybody was there when I said, ‘Roy, can you clean this up?’ And his answer was... very curtly given. He said, ‘I can work on this,’ ” the President said during his public address on Monday night, Sept. 21.

The “white sand” being referred to is crushed dolomite shipped all the way from Alcoy, Cebu. Dolomite is a rock-forming mineral related to limestone that develops in a marine environment.

Duterte said he was impressed by Cimatu when the environment chief accepted the challenge to clean up the heavily polluted bay.

“It was a very positive statement. It was not even a neutral thing or a thing that would border (on speculation). He did not say, ‘I can do it if…’ He said, ‘I can do it.’ And people are now enjoying the benefits of the determined action of a Cabinet member to do good,” Duterte added.

He also thanked his other Cabinet members, saying he would have a hard time running the country without them.

“I’m not saying I have succeeded. That is for the people... to assess or give when I’m no longer the President,” he said.

The P389-million “beach nourishment” project, which involves covering a 500-meter stretch of Manila Bay’s shoreline with crushed dolomite, has drawn flak due to the supposed health problems it may cause and its timing.

Critics of the project claim the funds for the project should have been used to strengthen the government’s response to the coronavirus disease 2019 pandemic and to assist the poor. Some groups also alleged that exposure to the “white sand” could harm the skin, lungs and eyes.

Presidential spokesman Harry Roque previously said the white beach project would help control flood and prevent soil erosion. He has also clarified that the project was conceptualized way before the spread of COVID-19.

The Department of Environment and Natural Resources (DENR) has pointed out that funding for the project, which was appropriated last year as part of the Manila Bay cleanup, could not be realigned to other purposes such as pandemic assistance.

Duterte chided critics of the project, saying they would criticize the government regardless of what it does.

“What do you want us to do? The problem is some are saying we are not doing enough. What can we do with the germ that’s flying around? It’s the microbe that can’t be controlled. What will you do? Spray mo from the sky?” the President said.

Roque also responded to criticisms that the extraction of dolomite rocks used in the Manila Bay project has damaged the marine ecosystem in Cebu.

“We have not verified that. The DENR will study that and we will check how to address the damage that happened in Alcoy, Cebu,” Roque said in a press briefing on Tuesday, Sept. 22. 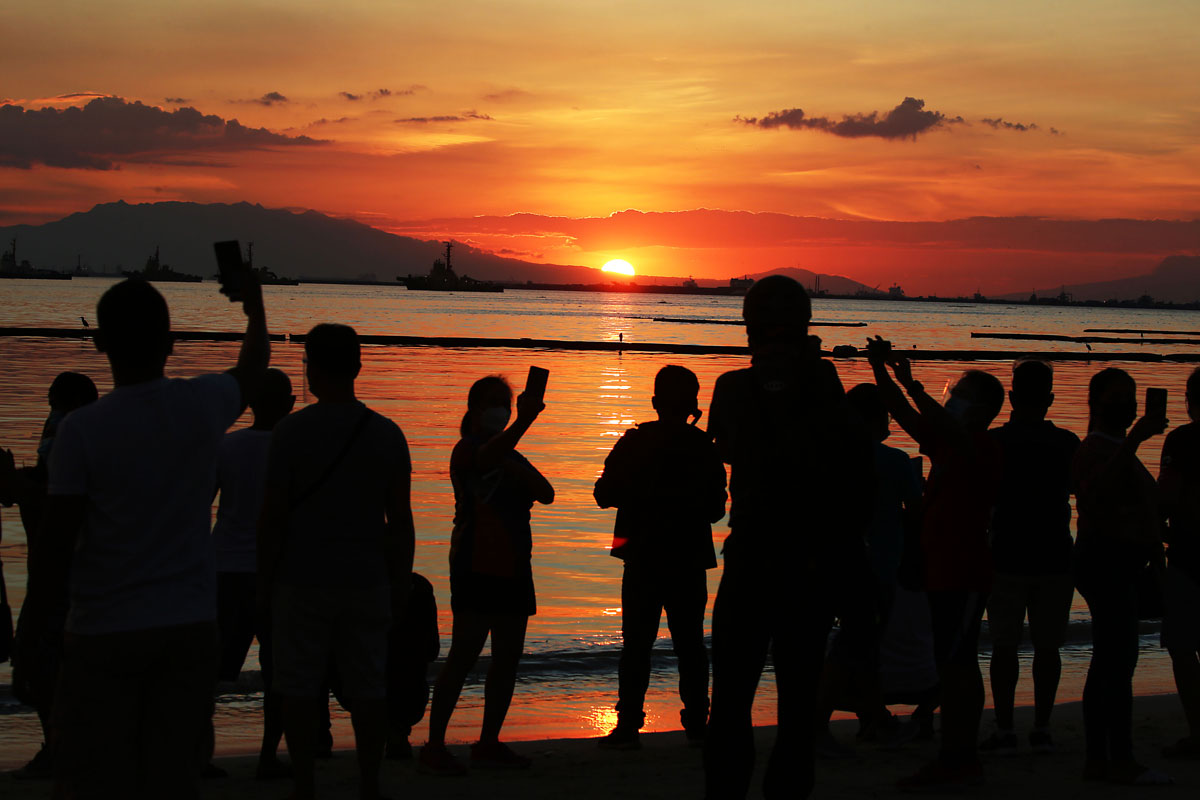 An infrastructure-oriented think tank said Tuesday the controversial project has no environmental compliance certificate (ECC) as mandated by law, and is possibly tainted with corruption.

Infrawatch PH convenor Terry Ridon said the project has no ECC despite being located in an area with tourist potential and unique historical interest. He said projects in such areas require the certificate in compliance with the regulations of the DENR.

Ridon thinks Duterte may have confused the objectives of the Manila Bay rehabilitation.

“The urgent objective of rehabilitating Manila Bay was not to give the public a nice place to visit, as the President said. The objective is to improve water quality, protect biodiversity and ensure sustainable development. As admitted by DENR officials themselves, beach nourishment is not found in any Manila Bay master plan,” Ridon pointed out.

He also warned the project had indications that it is tainted with overpricing.

“Allowing this project to proceed without disclosing its project costs will undermine the anti-corruption drive of the President,” he said.

He noted there was only one bidder for the project that bagged the contract that had only 2.04 percent variance from the P398 million proposed by the DENR as its budget.

Ridon said the winning bidder – identified as Mac Builders and Dragonhart Construction Enterprise Inc. – did not offer any discount from the bid price, despite being the sole bidder, while the Department of Public Works and Highways, which is implementing the project, did not bother to negotiate for a lower cost.

He stressed that having only one bidder makes contract prices uncompetitive, as there is no other party offering a lower price to government.

Ridon said concerns on the project related to the coronavirus response would continue if the DPWH does not disclose costs.

He noted that if the sand would last for 20 to 30 years, it could be considered as money well spent.

“But the problem with DENR, even an estimation of the project life has not been made. No study has been disclosed projecting the life of the project. If the project lasts only until the next five years, are they willing to go to jail for this?” Ridon asked.