The Department of Social Welfare and Development admits that it has yet to release the promised assistance and that it cannot give a target date for the households to receive the amount. 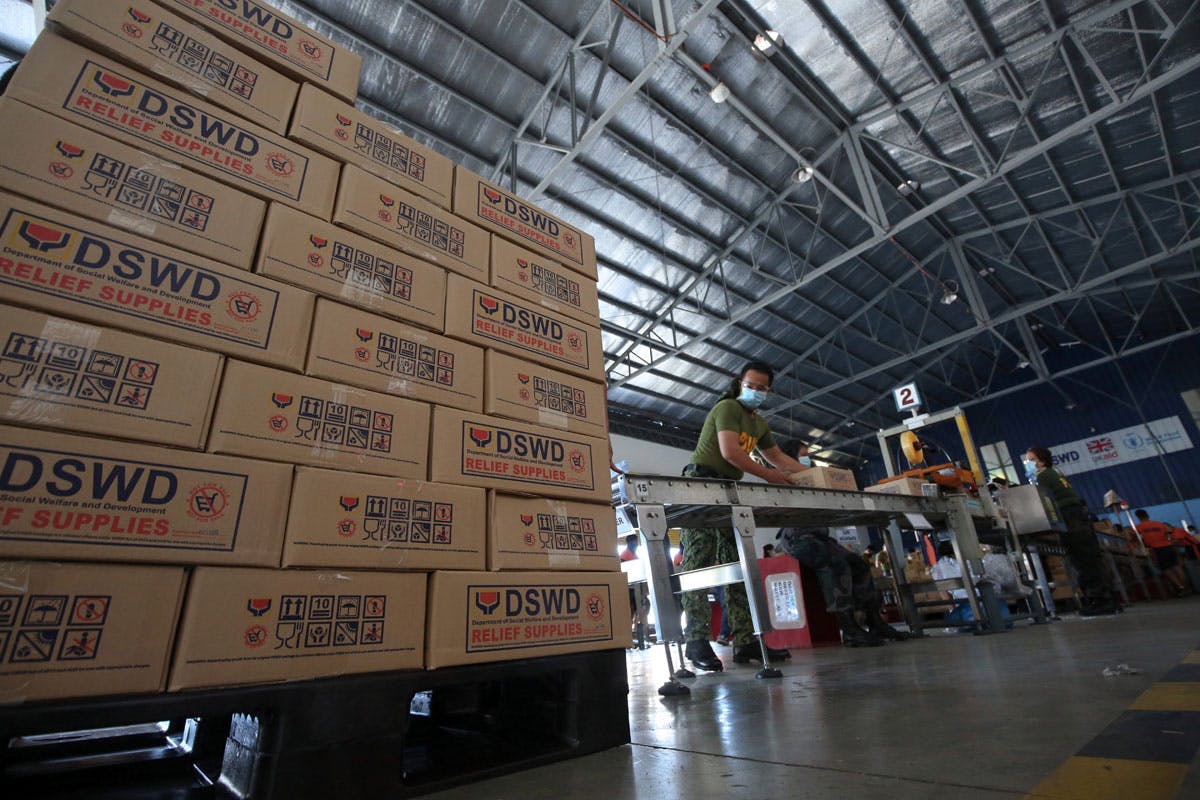 A policeman assists in repacking relief goods inside the Department of Social Welfare and Development’s warehouse in Pasay City on April 2, 2020 for distribution to beneficiaries amid the enhanced community quarantine. Photo by KJ Rosales, The Philippine STAR

Despite criticism from several lawmakers regarding the Department of Social Welfare and Development’s slowness in distributing government assistance to households hit hard by the coronavirus disease 2019 (COVID-19) pandemic, President Duterte has opted to centralize the distribution of dole-outs and relief goods in the DSWD.

On March 23, Congress hurriedly passed Republic Act No. 11469 or the “Bayanihan to Heal as One Act,” granting Duterte additional powers that are meant to speed up the government’s response to the pandemic.

But it was only on Thursday, April 2 that DSWD Secretary Rolando Bautista announced that the agency finally had the P100 billion to fund the first of the two monthly tranches that would be given to the target beneficiaries estimated at 18 million households.

In the Laging Handa livestreamed briefing, Bautista said the maximum monthly assistance ranging from P5,000 to P8,000  – with the amount depending on the region – would be given to the majority of beneficiaries only after a minimum of three days, depending on how quickly the local government unit (LGU) personnel could gather the profiling forms from each household.

“Minimum of three days iyon, kaya na po iyon (it can be done),” he said as he stressed the need to validate each beneficiary household to ensure that they are qualified and assistance is not duplicated.

DSWD spokesperson Irene Dumlao clarified that if the beneficiaries are already enrolled in other state-funded aid programs such as the conditional cash transfer called Pantawid Pamilyang Pilipino Program or 4Ps, the maximum subsidy for each household cannot go beyond P5,000 or P8,000 monthly, depending on the region, for two months.

When will the assistance be given?

Asked about the target dates for the release of the dole-outs, the DSWD spokesperson did not answer.

This was despite Friday, April 3 being the deadline for LGUs, under DILG Memorandum Circular No. 2020-065, to submit a master list of the household beneficiaries. Malaya noted that LGUs could begin distribution of the aid if they could comply before the deadline. 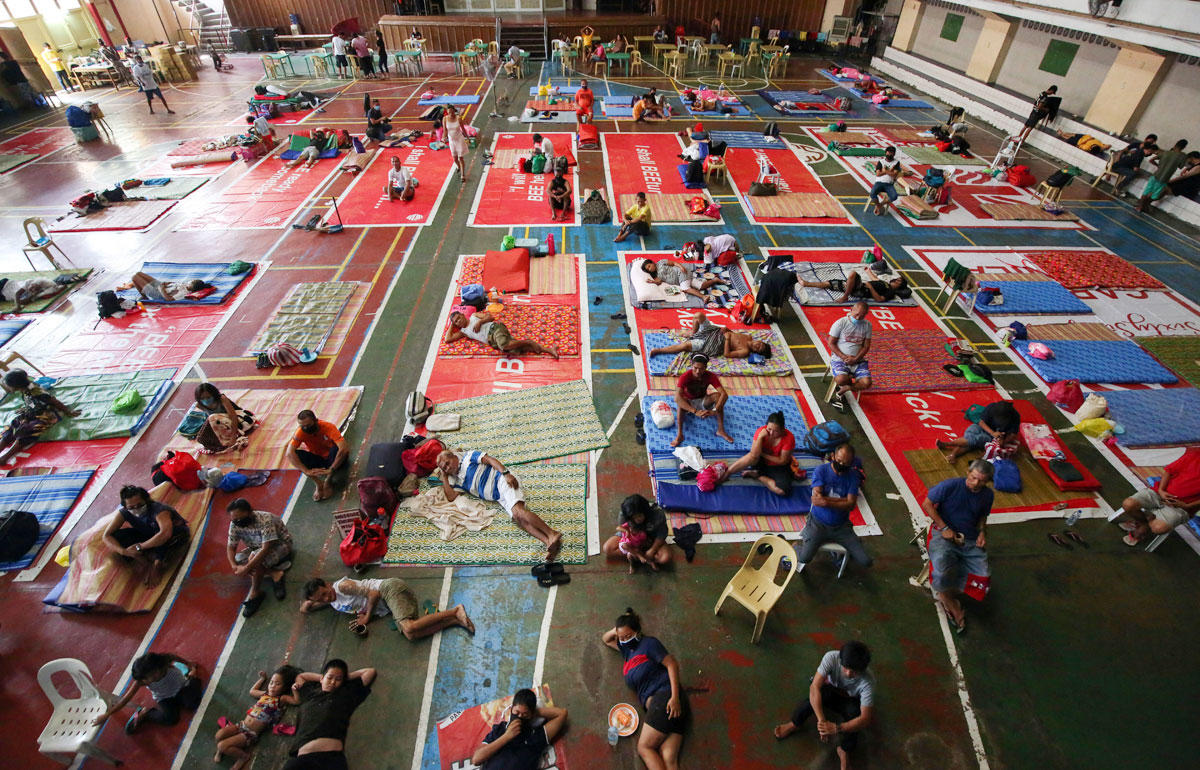 Dumlao admitted that “we have yet to start with the distribution” of the amounts under the Social Amelioration Program (SAP).

She said the DSWD – the primary implementing agency of the program – had taken the first step so far: coordination with LGUs.

“We distributed na po the Social Amelioration Card forms to LGUs. That’s the first (step in the) process,” she told The STAR, referring to the forms that will contain information about the families and will be “the mechanism for the affected families to access the social amelioration programs of the government.”

Mayor Andrea Bautista-Ynares of Antipolo City in Rizal on Wednesday posted an “urgent appeal” for the DSWD to release to the city government the barcoded social amelioration cards so these could be distributed to the beneficiaries.

Ynares hinted that the lack of forms could hinder compliance with the DILG’s directive to submit the master list of beneficiaries in her city.

As instructed by the DSWD, authorized personnel from the local government were supposed to distribute the SAC forms on a house-to-house basis.

The head of the family will fill in the necessary information in capital letters. Two copies of the form must be accomplished – one to be submitted to the LGU personnel and the other to be kept by the household for future reference and monitoring.

The problem highlighted by Ynares meant that if the city government could not gather the necessary information from the beneficiaries, it would be hard-pressed to start giving the cash dole-outs.

With Duterte handing over to the DSWD the task of distributing relief goods, Malaya said the DILG has no choice but to wait for instructions on its role before pitching in.

Asked about the role of the DILG and LGUs following Duterte’s centralization of relief efforts, Malaya said the department “will monitor to ensure that the funds get to the poor families who need it.”

“It’s the DSWD that controls the program so we will await its instructions in this regard,” he said.

Dumlao did not respond to queries on how the DSWD would implement Duterte’s directives.

Joint Memorandum Circular No. 1, series of 2020 covers families that “belong to either the poor or the informal sector which are at risk of not earning a living” during the enhanced community quarantine period.

To qualify, such families may have at least one member who is a senior citizen, a person with disability, a pregnant or lactating woman, a solo parent, or an overseas Filipino worker repatriated or banned from traveling outside the Philippines. Also covered are indigent indigenous people, homeless persons, informal settlers or families whose combined income falls within the poverty threshold. 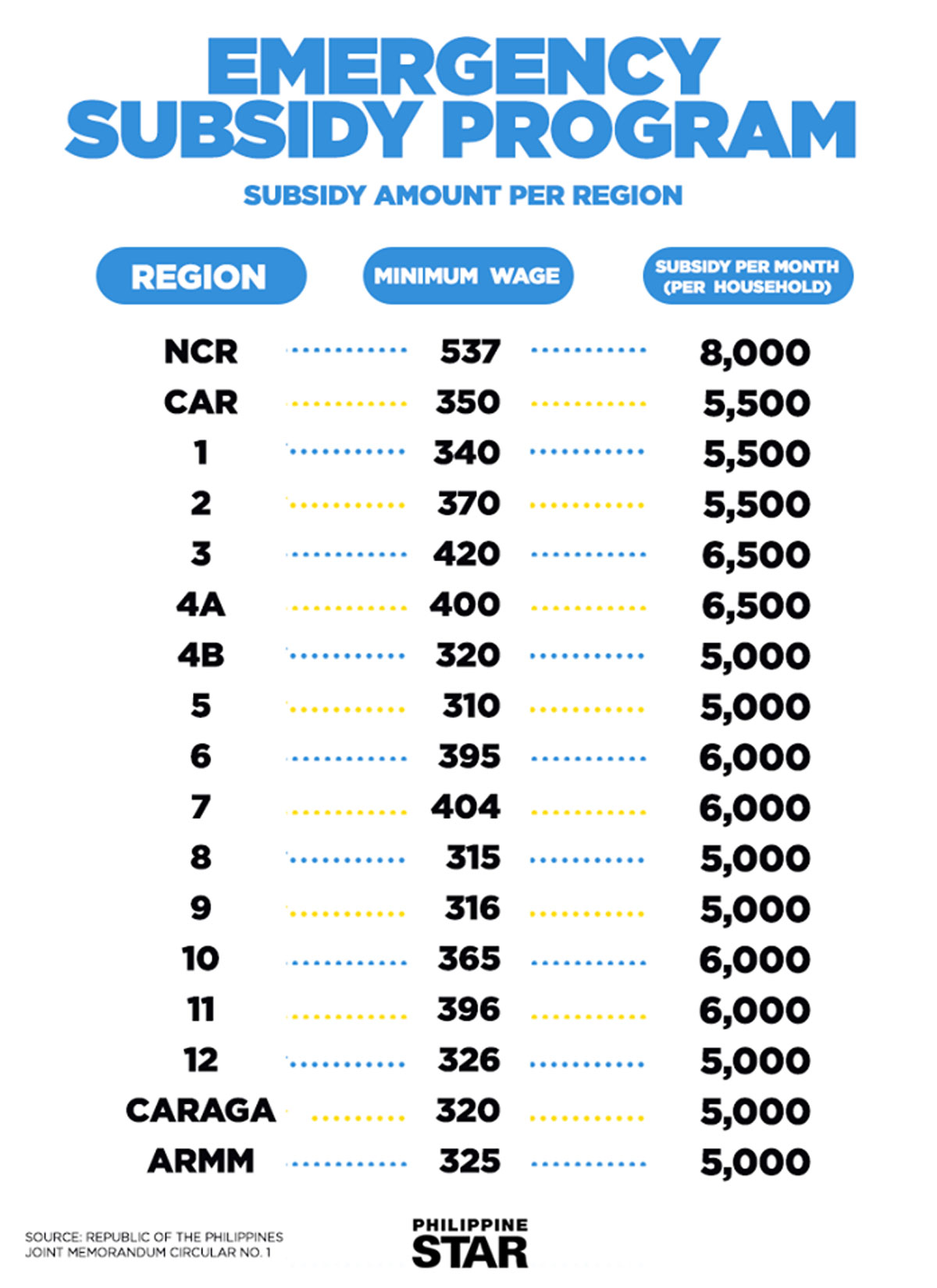 Duterte described the program as the “largest and widest social protection program in our country’s history” and said it aimed “to make up for the loss of economic opportunities due to the quarantine measures.” To compare, the 4Ps covers roughly four million families and distributes an average of P2,150 monthly.

There was also some confusion on how the assistance would be distributed. Dumlao on Wednesday said in a radio interview that only P3,000 would be given as cash, and the rest would be in kind.

Following Duterte’s directive to delegate the task of distributing relief goods to the DSWD, Bautista on Thursday changed tack and said: “In cash na ang matatanggap nila… Hindi na ito magiging combination ng food packs at cash amount (They will now receive it in cash. It will no longer be a combination of food packs and cash amount).”

This means the equivalent amount of the food packs to be given to the households will no longer be deducted from the subsidy.

Other agencies have launched their respective cash assistance programs. The Department of Labor and Employment (DOLE), through its COVID-19 Adjustment Measures Program (CAMP), gave a one-time quarantine assistance of P5,000 to the employees of establishments that have either shifted to flexible work arrangements or temporarily closed as a result of the quarantine.

A total of P160 million has been distributed; the DOLE has so far recorded over 630,000 workers employed in 15,213 establishments who have been displaced by the pandemic.

In a statement on April 1, DOLE Secretary Silvestre Bello III said “the cash aid available is different from the allocation of between P5,000 to P8,000 in subsidy” given by the DSWD and other agencies.

Under this scheme, beneficiaries receive daily minimum wage for 10 days (P537 a day for non-agriculture workers in Metro Manila) in exchange for disinfecting their houses and vicinities, in coordination with local health offices that will provide accident insurance, personal protective equipment and cleaning kits.

Malaya noted that ahead of the national government’s social amelioration package (SAP), some LGUs had already tapped the quick response funds and calamity funds under their individual budgets.

LGUs that have announced the distribution of cash assistance include Pasig City, which would release a total of P55.5 million, or P3,000 to each of the 5,800 jeepney drivers, 12,000 tricycle drivers and 700 UV van drivers deprived of livelihood by the national government’s prohibition on public transportation.

Duterte barred politicians from distributing aid coming from the national government to households affected by the Luzon quarantine, in a move that Malacañang said would shield relief efforts from politicking.

The President said he had received numerous complaints about the way food and cash assistance are distributed, including unscrupulous persons taking a cut from the donations. 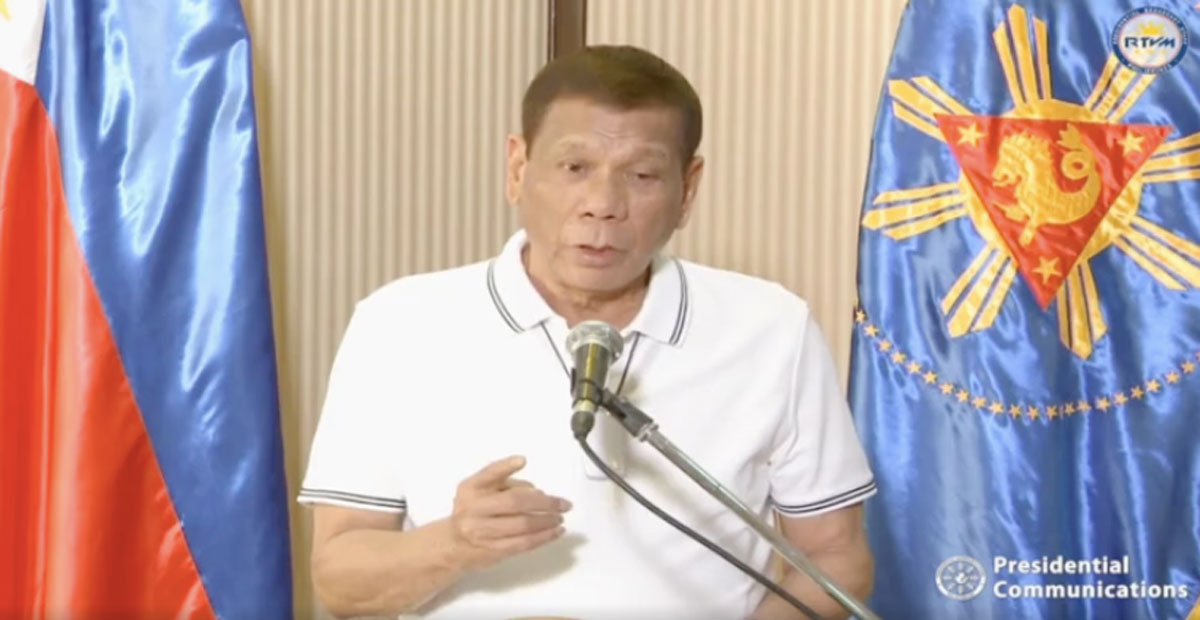 “Kasi ’yung iba nagdi-distribute kina-cutting. Instead of seven gawain ninyong five doon sa itaas sa repacking. Kaya ngayon DSWD na at ’yung pera DSWD pati si Secretary Galvez (Others take a cut from the assistance. Instead of seven, they would reduce it to five during the repacking. So it will now be done by the DSWD and Secretary Galvez),” he added, referring to Presidential Adviser on the Peace Process Carlito Galvez, who has been designated as the chief implementer of the government’s efforts to prevent the COVID-19 contagion.

Cabinet Secretary Karlo Nograles said Duterte wanted the DSWD to take charge of the distribution of assistance under the government’s SAP for sectors that have lost income because of the lockdown.

“He won’t allow it to be marred by politics or political patronage,” Nograles said in a televised press briefing on Thursday, referring to Duterte. “He wants beneficiaries to receive help, aid from the national government. Since the DSWD, the national government will lead the distribution, we will use existing platforms to reach the beneficiaries.”

Nograles clarified that the LGUs can still be tapped to assist in the distribution, but they can do so if they are supervised by the DSWD, the military and police. He said LGUs to be deputized for the distribution would also be required to submit liquidation reports immediately.

Local governments can also continue to use their quick response funds to provide aid to their constituents, Nograles clarified.

He assured the public that local officials who take advantage of the health crisis and who take cuts from donations would be held accountable.

“We will enforce the full power and strength of the law to those who do abusive acts regarding donations,” Nograles said. “Do not touch those donations. Distribute them.”

Read more: No epal, no politics, no corruption in relief distribution, LGUs warned