Transport groups and commuters decried the new policy scheduled to take effect next week, calling the measure absurd and illegal as 48 percent of the population remains unvaccinated. 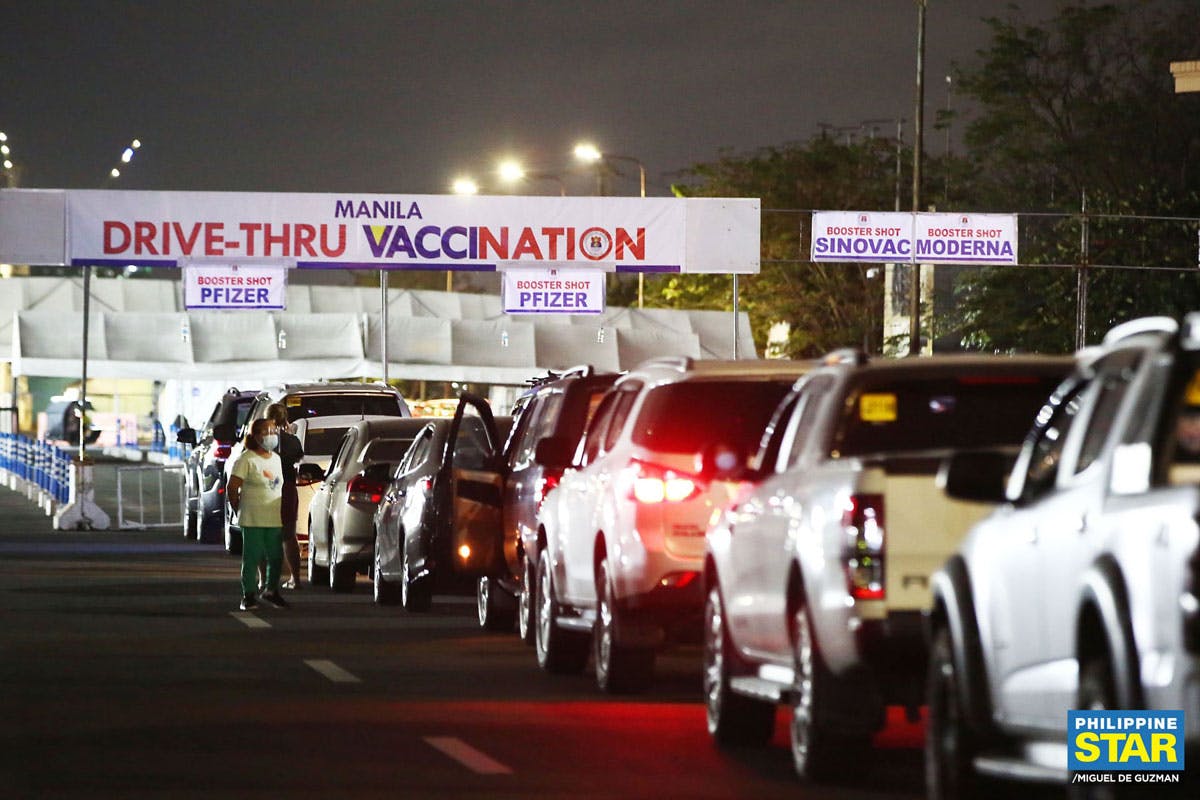 Motorists spend the night inside their cars as they queue for booster shots at a drive-through vaccination area at the Quirino Grandstand in Manila early Thursday, Jan. 13, 2022. Photo by Miguel de Guzman, The Philippine STAR

The “no vax, no ride” policy of the government is not anti-poor, the Department of Transportation (DOTr) insisted while stressing that there were no directives to prohibit travel for any-one amid protests against the policy.

“The policy is not anti-poor because anti-poor is prohibiting (travel). We have exceptions. If you need to go outside because you need to do something or you have an essential errand, you will be allowed,” DOTr Undersecretary Reinier Yebra told “The Chiefs” on One News on Wednesday night, Jan. 12.

“And this policy protects those who are unvaccinated that’s why the argument that it is anti-poor is somehow fallacious because it’s not absolute restriction, there are exceptions,” he added.

Under the policy signed by Transportation Secretary Arthur Tugade on Tuesday, Jan. 11, public transportation access within Metro Manila would be limited only to the vaccinated population during Alert Level 3 or higher.

Transport groups and commuters decried the new policy scheduled to take effect next week, calling the measure absurd and illegal as 48 percent of the population remains unvaccinated.

“To be clear, there is no directive to prohibit travel. Unvaccinated individuals are allowed to travel by using other means aside from public transport. Even the Department Order of the DOTr has exceptions. Remember that the so-called right to ride needs to be balanced with our

While the DOTr has apologized for the inconvenience of the ‘no vaccine, no ride’ policy, it maintained that this is a cheaper way to combat the spread of COVID-19.

“It will be a much heavy burden for commuters if we experience a repeat of public transport closures,” it said. “If we do not act now, all industries and business sectors will be severely affected.”

The DOTr assured the public that the implementation will be both patient and firm while the Land Transport Franchising and Regulatory Board said transport marshals would randomly inspect public utility vehicles (PUV) to check their compliance with the policy.

Rights of the unvaxxed

For Commission on Human Rights (CHR) spokesperson Jacqueline de Guia, the “no vaccine, no ride” policy “effectively restricts the exercise and enjoyment of fundamental rights” given that ordinary Filipinos continue to rely on public transportation to access basic needs like food, work and health services.

“We cannot use the present pandemic as a justification to set aside pertinent laws and human rights standards meant to protect human rights and dignity in all situations and at all times,” she added.

The CHR official also said present restrictions for the unvaccinated should be constantly reviewed to ensure that they are legal measures, consistent with other recognized rights and in proportion to public health protection. She said restrictions imposed by the government must, at a minimum, be carried out in accordance with law.

“Without a law detailing the precise parameter for the restriction of rights, the policy restricting rights runs into the danger of being sweeping and overly broad that assaults even personal liberties,” de Guia said. - With Richmond Mercurio, Janvic Mateo