The Department of Labor and Employment sees employment situation in the country improving with the upcoming holiday season and the elections. As of August this year, there are 3.88 million unemployed Filipinos and 6.48 million who are underemployed. 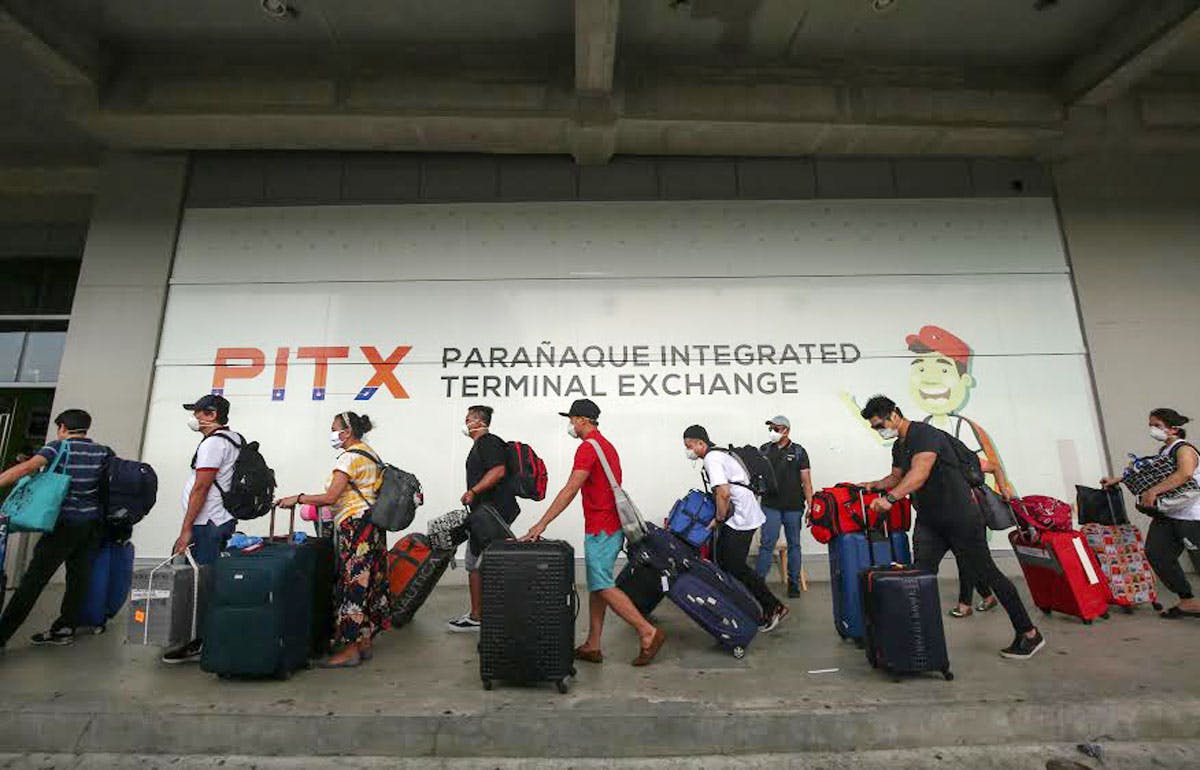 Repatriated overseas Filipino workers arrive at the Parañaque Integrated Terminal Exchange on May 28, 2020 after being allowed to go home following weeks of being quarantined to prevent the spread of COVID-19. Photo by KJ Rosales, The Philippine STAR

Call center agents and street sweepers are now highly in-demand workers, according to the Department of Labor and Employment (DOLE).

Data from the DOLE-Bureau of Local Employment (BLE) showed a total of  3,672 vacancies for call centers agents and 3,556 slots for street sweepers.

DOLE said job seekers may apply for the job vacancies by visiting the nearest PESO in their area.

As this developed, , Sen. Joel Villanueva said on Monday Oct. 11,  the labor department must  must go beyond creating temporary jobs as stable and sustainable employment would be key in helping the economy recover from the COVID-19 pandemic.

Villanueva, who chairs the Senate committee on labor and employment, made the call during the hearing of the DOLE’s proposed budget for 2022 on Monday where he stressed the importance of creating regular, sustainable jobs under the government's National Employment Recovery Strategy (NERS).

He said NERS only scratched the surface of the massive unemployment triggered by the pandemic.

While 780,119 jobs were created from the NERS as reported by the DOLE, he pointed out that three of the seven programs cited in the report merely generated short-term employment.

“We've sought clarification from DOLE to specify how many jobs were actually created under NERS since June this year,” he added.

He said the DOLE must make a detailed inventory of the kind of workers and skills needed by industries and sectors and immediately release them to the public.

The senator stressed emergency employment helps displaced and disadvantaged workers, but what they really need is stable and dependable regular employment.

Villanueva explained the GIP, SPES, and TUPAD programs only served as temporary employment opportunities for beneficiaries.

GIP is a three-to-six month internship program open for high school, technical-vocational or college students who intend to pursue a career in government, according to the DOLE website.

On the other hand, SPES is “DOLE’s youth employment-bridging program which aims to provide temporary employment to poor but deserving students, out-of-school youth, and dependents of displaced or would-be displaced workers.. to augment the family’s income to help ensure that beneficiaries are able to pursue their education.”

TUPAD is the government's emergency employment program “for displaced workers, underemployed and seasonal workers, for a minimum period of 10 days, but not to exceed a maximum of 30 days, depending on the nature of work to be performed,” according to the DOLE website.

The senator pressed the DOLE to account for the jobs created under NERS so that efforts to spur employment are monitored closely.

“I know that NERS is an inter-agency or whole of government initiative but let us reach for our targets, specifically for DOLE,” Villanueva said. “It is important to emphasize the crucial role of our offices not only in employment recovery but in job creation.”

Last June, President Duterte signed Executive Order (EO) No. 140 officially adopting NERS as the Philippine government’s master plan for the restoration of the country’s labor market. The EO institutionalizes the 20-agency strong NERS Task Force (TF), charging it to implement the strategy from 2021 to 2022, in response to the effects of the COVID-19 pandemic.

NERS is an employment recovery plan anchored on the Updated Philippine Development Plan 2017-2022 and ReCharge.PH expanding the Trabaho, Negosyo, Kabuhayan initiative in consideration of the changes in the labor market brought by pandemic and the accelerated adoption of new technologies. It takes a whole-of-society approach in the development of a national strategy that addresses the social and economic issues arising from the lingering pandemic.

DOLE sees employment situation in the country improving with the upcoming holiday season and the elections.

“Mostly if it’s holiday season, then (there will only be) seasonal jobs and (they end by) January to February. But again 2022 is election year so these jobs may be sustained even after the end of 2022,” Labor Assistant Secretary Dominique Tutay said.

Tutay noted the government already anticipated that the August Labor Force Survey would show an increase in unemployment because of the lockdown imposed to prevent the spread of Delta COVID-19 variant.

But like in the past, the forthcoming May 2022 elections are also expected to generate jobs for many Filipinos aside from the holiday season.

“If you look at statistics over time, every election year that generates about 1.5 million to two million net employment…Then maybe a year after it will taper down again. But I'm not really sure because we are now in a pandemic situation so employment may increase but maybe not as much as we have experienced in past election years,” Tutay told BusinessWorld Live on One News on Tuesday, Oct. 12.

Aside from the elections and holidays, Tutay said, the new alert system could also help boost employment and enable the country's economy to recover.

Unlike the previous quarantine restrictions, Tutay said the new alert system only affects smaller areas like a barangay, thus more establishments get to operate and provide employment.

To generate more employment, the DOLE is pushing for the vaccination of more workers nationwide. The DOLE launched an immunization program among workers in industries identified as key employment generators.

At this time, Tutay said, less than half of the employed Filipinos have been inoculated due to vaccine shortage.

Citing data from the Department of Health (DOH), Tutay said only seven million of the 44 million employed Filipinos are fully vaccinated while 10 million have received first dose.

“Even if there are vaccines coming in, (they’re) not enough to cover 70% of the targeted population that should be vaccinated and therefore most of the companies still ask the assistance of the DOLE and NERS Task Force for them (workers) to be vaccinated,” she pointed out.

Tutay conceded the more than 780,000 jobs generated so far are not enough to compensate for the job losses resulting from the pandemic. She said the target of generating at least one million jobs a year was not met.

The labor official said underemployment remains high at 14.7% mainly because many companies are still adopting flexible work arrangements to cope with the impact of the pandemic.

DOLE is working with the private sector in an effort to create a million jobs this year.

"We have made so far an initial dent in our one million job target, but I'm not (going to) announce the figure yet," Tutay said. Most of the jobs generated came from the manufacturing sector.