The Department of Health said it is doing an inventory of COVID-19 vaccines after presidential adviser for entrepreneurship Joey Concepcion revealed that 27 million jabs are set to expire in July. 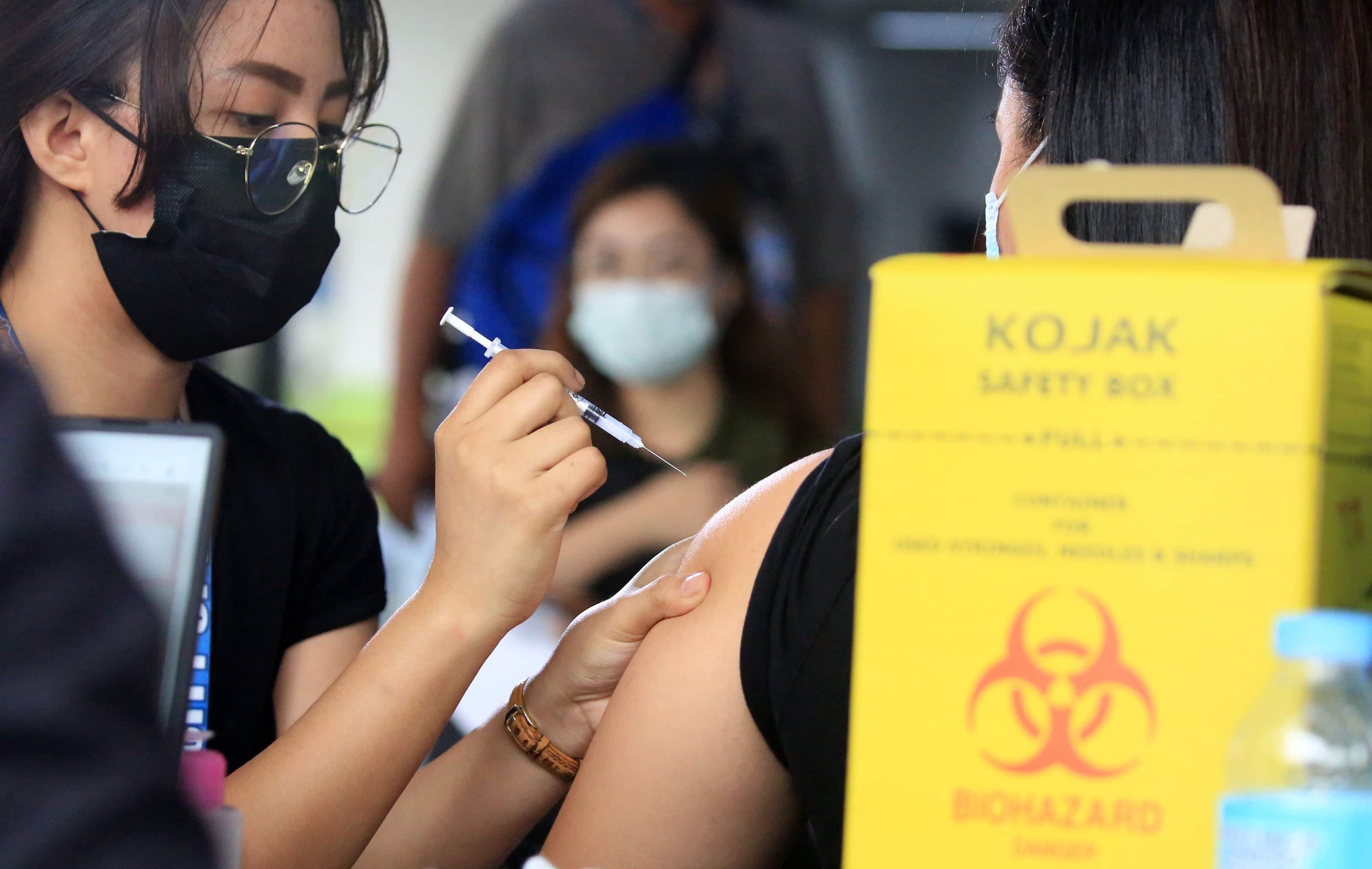 A health worker administers a COVID-19 vaccine on a Light Rail Transit Line 2 passenger at its station in Recto, Manila on Feb. 22, 2022. Presidential adviser for entrepreneurship and Go Negosyo founder Joey Concepcion announced that some 27 million doses are set to expire in July. Photo by Edd Gumban, The Philippine STAR

With 27 million doses of COVID-19 vaccines in the country set to expire in July, presidential adviser for entrepreneurship and Go Negosyo founder Joey Concepcion made a renewed call Saturday, April 2, to the public to get vaccinated and to take booster shots.

“Let’s not allow 27 million doses of the COVID vaccine to go to waste,” he said in a statement.

He emphasized it is important for Filipinos to get vaccinated and, if already eligible, to get their booster shots.

The Department of Health (DOH) said it is doing an inventory of COVID-19 vaccines to identify those nearing expiration.

“We are doing our wall-to-wall count. This means that DOH and its partners are doing an inventory of stocks up to the municipal level,” Undersecretary and National Vaccination Operations Center (NVOC) head Myrna Cabotaje said at a public briefing.

Earlier, Concepcion proposed that presentation of booster cards in enclosed establishments to replace vaccination cards be made mandatory by June this year to encourage Filipinos to get their third shots against COVID-19.

“Time is of the essence. This is why I am calling it out now while there is still time before these vaccines expire. If we don’t use these vaccines, we will have wasted the Filipino taxpayers’ money,” he said.

He said the money spent on the vaccines should not go down the drain, considering that the country’s debt level has already breached the P12-trillion mark primarily due to pandemic-related expenses.

“Both government and the private sector bought these vaccines for our citizens,” he said.

The Philippines has received more than 237 million vaccine doses, with some 140.7 million already administered nationwide.

As of March 22, over 65 million Filipinos have been fully vaccinated, but only 11.63 million additional or booster shots have been given, indicating only 13 percent of the eligible population have received their booster shots.

“We in the private sector bought our own supplies through the A Dose of Hope tripartite agreement, and we shared these with the government because we know that vaccines are the solution to battling this pandemic,” Concepcion said.

“We wouldn’t have managed to keep our hospitalization rates low and open up the economy without the vaccines,” he said further.

While the Philippines is now one of the countries in Asia with low average daily attack rates, or where the seven-day average number of cases per 100,000 and health care utilization re-main low, he said the public should not sit back and relax.

He said a majority of the population will have waning immunity from the virus by the second half of the year and should COVID-19 infections rise, this may trigger the imposition of lockdowns once again.

If the conflict between Russia and Ukraine drags on, he said the country may again have to undergo lockdowns in the midst of rising commodity prices and logjams in the supply chain.

“Unless we finish all the vaccines in stock and booster everybody that needs it, we risk going back to square one by yearend,” he said.

“We need to push a little, and we need to do the groundwork now. People have become complacent and no longer feel that they need to booster. What they do not see is that the real dan-ger is in the second half of the year,” he pointed out,

DOH’s Cabotaje said the bulk of vaccine shipment arrived by the end of November and December last year and in January this year.

During this period, however, the uptake of vaccines began to decline.

The vaccines comprised those procured by the national and local governments and the private sector, as well as those donated to the Philippines.

“If they were delivered earlier, we would have been able to administer them already,” she said.

According to Cabotaje, the DOH is considering donating these vaccines to neighboring countries in Asia. The idea is being discussed with the Department of Foreign Affairs.

The official added they are also coordinating with the COVAX Facility to determine if vaccine doses donated by the facility could be donated to other countries.

COVAX Facility is a system under the World Health Organization through which COVID-19 vaccine donations are coursed. – With Sheila Crisostomo