Alias CDO: Can The NTC Stop ABS-CBN From Producing Content As Blocktimer?

Are the lawmakers who are questioning ABS-CBN Corp.’s airing of programs on Channel 43 effectively going against agreements by franchisees to share airtime with production outfits? 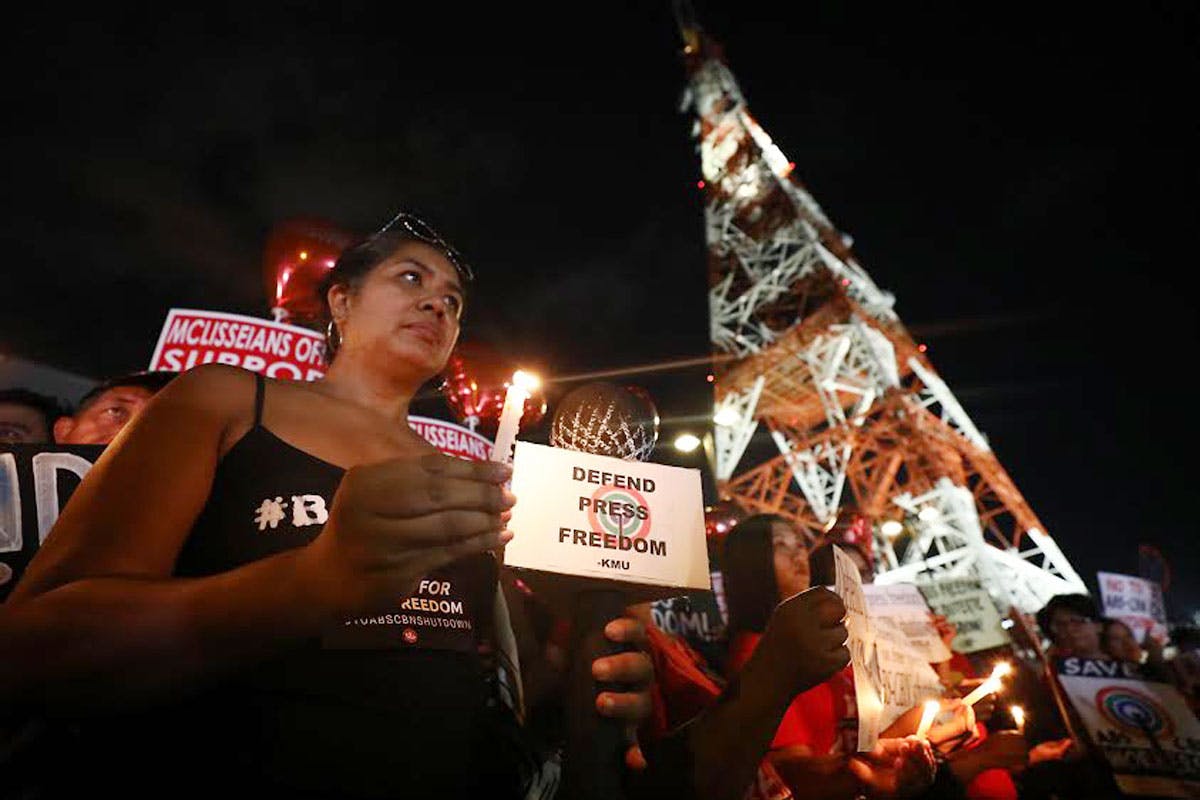 ABS-CBN employees, supporters and various rights groups gather in front of the network’s main office in Quezon City on Feb. 14, 2020 to protest moves to revoke its franchise. Photo by Miguel de Guzman, The Philippine STAR

The National Telecommunications Commission has effectively frowned against the usual practice of “blocktiming” by issuing an “alias cease and desist order (CDO)”   stopping ABS-CBN Corp. from operating its TVplus digital channels through Channel 43 in Metro Manila – whose franchise is owned by a separate company and has not yet expired.

The NTC’s order – egged on by three lawmakers critical of ABS-CBN – puts the livelihood of thousands of workers in peril and, according to the National Union of Journalists of the Philippines, deprived millions of viewers of the right to “choose how to access news, information and entertainment.”

According to ABS-CBN head of corporate communications Kane Errol Choa, 4.4 million homes tuned in to TVplus black boxes to access a greater selection of digital channels for a one-time fee of only around P1,500.

Digitalization in recent years allows franchise holders to air multiple channels out of a single broadcast frequency, much to the annoyance of the Federation of International Cable TV Associates of the Philippines – criticized for spreading the false statement of “one franchise, one channel.”

Choa said another NTC CDO affected 1.5 million subscribers of SKY Cable Corp.’s SKY direct broadcast satellite service due to the expiration of its franchise under Republic Act No. 7969 (although Sky Cable and Sky Fiber were not yet covered by the order). 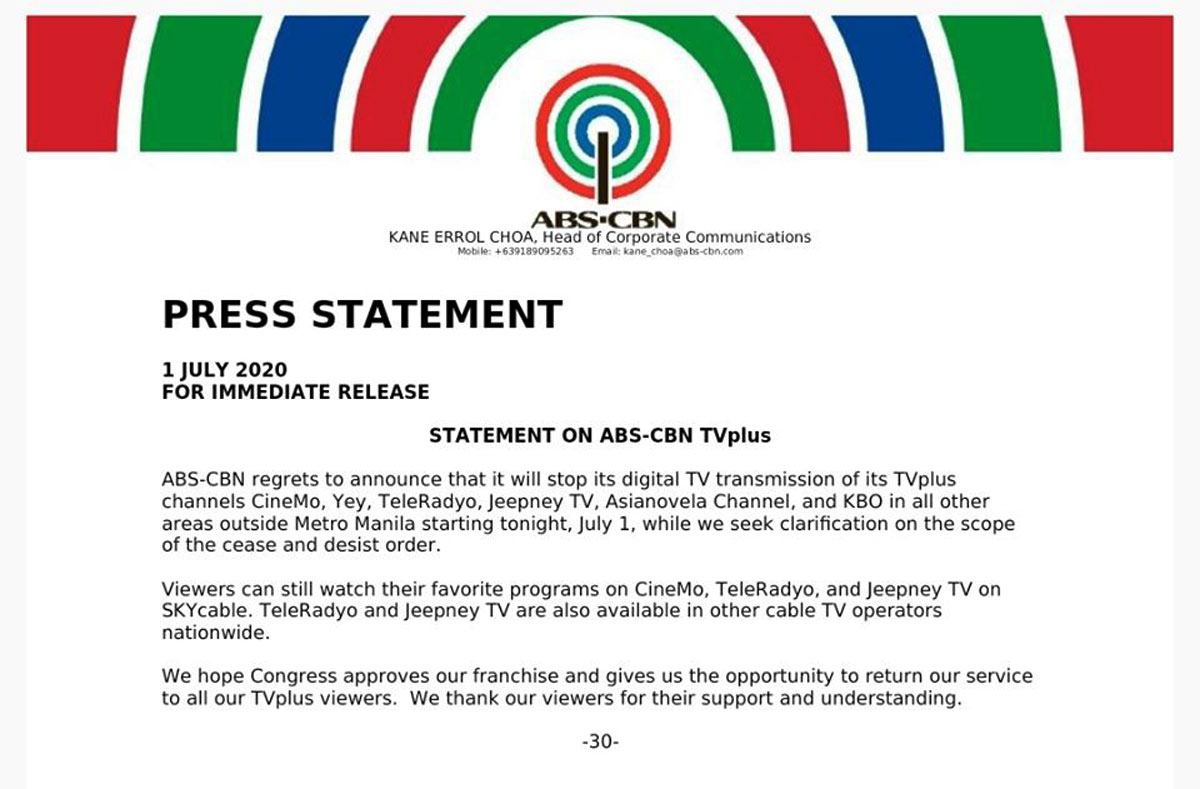 A former government official, speaking on condition of anonymity, asked why the NTC had to extend its reach to cable and digital operations.

The former official explained that the public used to watch the shows of ABS-CBN and its affiliates through the following modes:

The “alias CDO” on the TVplus operations means that ABS-CBN, by airing programs through cable and other channels, was deemed by the NTC to have yet to completely comply with the CDO issued on May 5 after the network’s legislative franchise expired on May 4.

This was notwithstanding the fact that ABS-CBN Corp. and ABS-CBN Converge Inc. were separate corporate entities from the holder of the still-unexpired franchise of Channel 43 – Amcara Broadcasting Network, which was 49-percent owned by ABS-CBN Corp. until Jan. 24, 2019.

ABS-CBN Corp., in its official corporate statement, stressed that Channel 43 was “not mentioned” in the May 5 order, but complied anyway, “consistent with the intent of the alias CDO” on June 30.

Nandy Villar, integrated marketing head of ABS-CBN Corp., said the airing of multiple TVplus digital channels through Amcara’s frequency was an example of a “blocktime” agreement – in which the holder of a franchise leases airtime to the shows of an outside production outfit.

“I need to point out that producing a show and broadcasting are two different activities. The former doesn’t require a franchise. Anyone can produce a show and buy airtime from a broadcaster that has a franchise to broadcast,” Villar argued.

She said the NTC’s “incompetent” commissioner, along with House Deputy Majority Leader Jesus Crispin Remulla, Deputy Speaker Rodante Marcoleta (of Sagip party-list) and Anakalusugan party-list Rep. Michael Defensor,  simply wanted to extend the issue of ABS-CBN’s expired franchise to a network that continues to have a valid one.

“That’s foul. Channel 43 still has a valid franchise. For ABS-CBN to produce shows and find platforms to exhibit them is not part of the cease and desist order. To blocktime is also not illegal,” Villar said. “This is unjust railroading. It’s not due process anymore.”

The most enduring example of a blocktime agreement is that of GMA Network Inc. and ZOE Broadcasting Network Inc., from 2005 to 2019.

Because ZOE, a company owned by Jesus is Lord Church founder Eddie Villanueva, could not produce too many shows besides religious programming, it allowed GMA to air dramas, news and infotainment shows under the names QTV, Q, and GMA News TV.

GMA Network incurred P992.66 million in rental expenses in 2018, the last full year of the agreement. But GMA Network’s use of ZOE’s airwaves did not mean they became the same corporate entity.

Other examples of blocktime agreements include Television and Production Exponents Inc.’s ongoing airing of “Eat Bulaga” in GMA’s afternoon block, as well as the numerous times that the government’s struggling Intercontinental Broadcasting Corp. leased airtime to various production companies, including the TV5 Network Inc. sports division from 2011 to 2013. 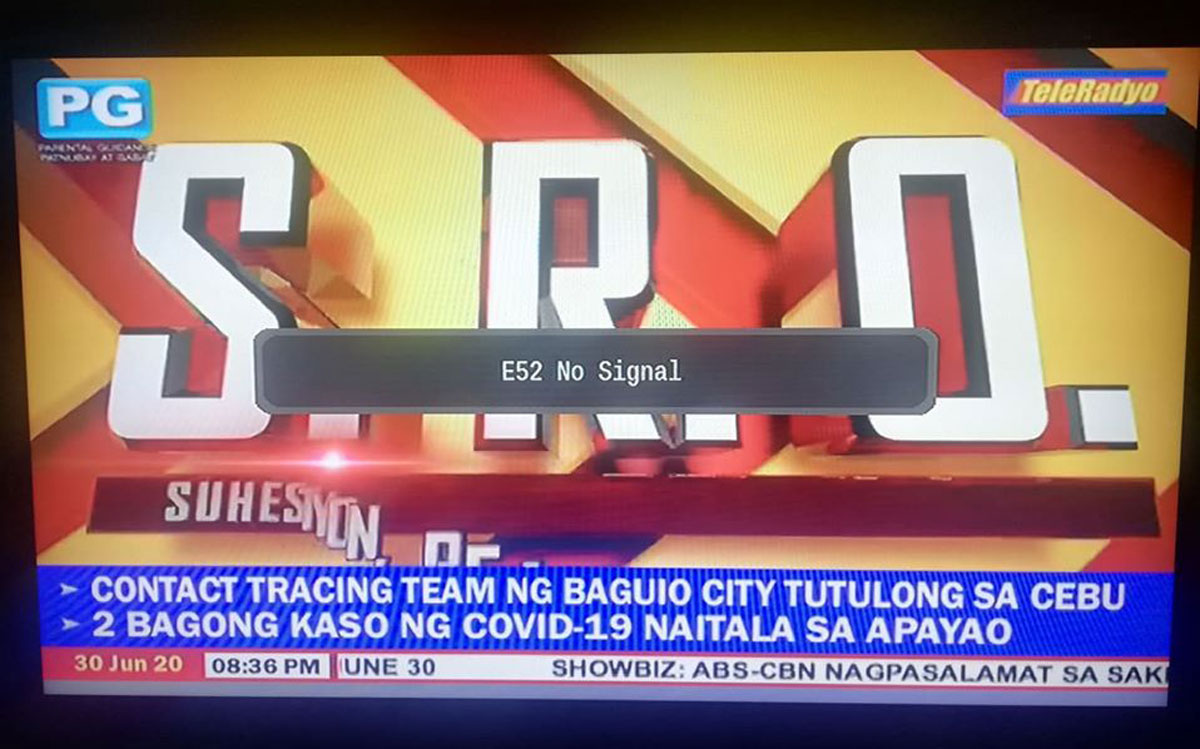 Early this month, Marcoleta  also asked the NTC why ABS-CBN could still air content through SKY Cable when the latter’s own franchise expired on March 30.

This was during the continuation of the joint hearing of the House of Representatives on ABS-CBN’s franchise.

In response, NTC commissioner Gamaliel Cordoba cited Executive Order No. 205 issued by former president Corazon Aquino in 1987 that essentially removes the requirement of a legislative franchise for cable TV operations.

Section 1 of EO 205 states that “the operation of cable antenna television system in the Philippines shall be open to all citizens of the Philippines or to corporations, cooperatives or associations wholly owned and managed by such citizens under a certificate of authority granted by the NTC.”

But Marcoleta asserted that EO 205 was outdated, having been issued on June 30, 1987, way past the Feb. 2, 1987 ratification of the 1987 Constitution, which removed the lawmaking power of the Philippine president.

He also claimed that SKY Cable Corp., then called Central TV, did not avail itself of a certificate of authority to operate from the NTC, but instead asked for a franchise from Congress.

According to Marcoleta, the NTC can grant a certificate of authority to operate, but this is effective for only 15 years. He said SKY Cable did not use this and instead went to Congress to get a franchise, which expired on March 30.

But the former government official interviewed by The Philippine STAR said that as for SKY Direct’s operations, EO 205 removed the requirement for cable TV operators to secure a legislative franchise from Congress.

Thus, the NTC only had to assess a cable TV operator’s legal, financial and technical capacity to operate in certain areas to grant a certificate of authority.

In a statement on Tuesday, SKY Cable said SKY Direct’s “1.5 million subscribers nationwide, including those in remote areas that do not receive television signals, will be deprived of access to the channels we carry that bring them news, information, education, and entertainment” as the NTC stopped the company from operating its direct broadcast satellite service immediately.

“In the spirit of fairness, we continue to appeal to the NTC to extend the same privilege given in the past to other companies whose franchises have expired but are currently pending in Congress to continue its operations until a resolution is passed,” the statement read.

On Wednesday, July 1, the company said SKY Cable and SKY Fiber – which offers broadband internet services – are not affected by the CDO. 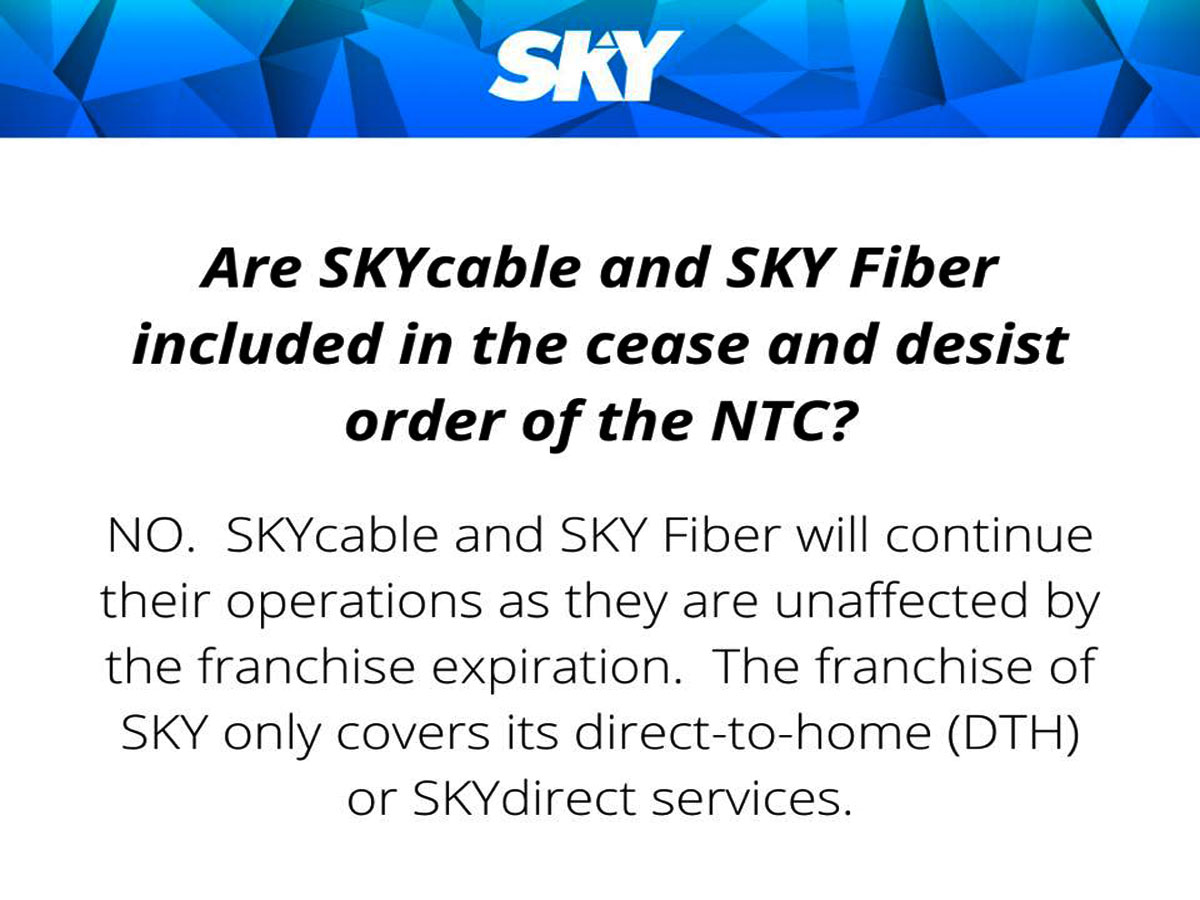 SKY Cable has a transponder lease agreement with New Skies Satellites B.V. for the lease of satellite capacity for the operation of its DBS service through satellite dishes.

The NTC said it granted a provisional authority to Sky Cable Corp. to operate and maintain a DBS service from 2015 to 2021, but noted that this franchise already expired on May 4 along with ABS-CBN Corp.

NTC asked SKY Cable Corp. to "show cause why frequencies assigned to it shall not be recalled for lack of necessary congressional franchise to operate," and to "refund its subscribers amounts representing unconsumed prepaid loads, deposits on equipment and devices, deposit or advance payment for postpaid subscribers, charges collected from new applicants."

Marcoleta complained that ABS-CBN Corp. tended to innovate so quickly and did not allow Congress and regulators to catch up.

The NUJP earlier pointed out that Defensor had virtually confirmed that efforts to shut down ABS-CBN were an issue of freedom of the speech and of the press. The NUJP noted that Defensor, a vice chairman of the House committee on good government and public accountability that is part of the joint panel hearing ABS-CBN’s franchise, called on the network to limit its programming to shows that are “non-political” and get rid of its news and public affairs component.

“It becomes increasingly clear that putting the squeeze on ABS-CBN is aimed at emasculating the media by holding up the network as an example of the fate that could await other outfits that insist on being true to their watchdog role and maintaining their independence,” the NUJP said.

The organization – which the National Task Force to End Local Communist Armed Conflict accused of ties to the Communist Party of the Philippines in retaliation for joining ABS-CBN’s fight for its franchise – called on the public to “stand with the critical and independent Filipino media in defense not only of our collective rights and freedoms but of democracy itself.”