US Assures Phl Of COVID Vaccine Supply; Other Firms Also Have Offers At Low Prices – Officials

President Duterte announced on Tuesday night, Nov. 10, that the government will borrow $300 million to purchase coronavirus vaccines being developed in other countries.

Vials with a sticker reading, "COVID-19 / Coronavirus vaccine / Injection only" and a medical syringe are seen in front of a displayed Pfizer logo in this illustration taken Oct. 31, 2020. File photo by Reuters

The Philippines has an assurance from the United States government and Pfizer Inc. that the country will not be left behind when it comes to vaccine supply for coronavirus disease 2019 (COVID-19) once this is ready for distribution.

The issue arose as Pfizer and its German partner BioNTech SE announced that their experimental vaccine is 90 percent effective at preventing COVID-19. The companies are still awaiting data on safety, which could come later this month.

Vaccine czar Carlito Galvez Jr., who is also chief implementer of the country’s response to the COVID-19 pandemic, said US President Donald Trump had earlier committed to President Duterte that Washington would prioritize the Philippines once coronavirus vaccines become available.

The Vaccine Expert Panel (VEP) has also identified five pharmaceutical companies including Pfizer as “probable contenders” for the supply of coronavirus vaccines for the Philippines, Galvez said in a press briefing organized by the Department of Health (DOH). Among the other firms in the list are Moderna Inc. and Novavax Inc.

Philippine Ambassador to Washington Jose Manuel Romualdez also disclosed in a recorded interview with presidential spokesman Harry Roque that he has been in talks with big pharmaceutical firms in the US, particularly Pfizer, with regard to vaccines being developed for COVID-19.

In the interview that was aired on Tuesday, Nov. 10, Romualdez said this should allay fears that the Philippines would not be able to get a fair share of vaccines from Western companies.

Romualdez said the breakthrough in talks with possible suppliers of the vaccines was a result of the coordination between Foreign Affairs Secretary Teodoro Locsin Jr. and the US State Department through Secretary Mike Pompeo in April.

According to Romualdez, Pfizer will not sell its vaccine “to countries like us at an expensive price because they know we are a simple country, moderate.”

“So it will be sold to many of their allies, specifically the Philippines, which would not be too expensive. It will probably be around $5 per shot and that’s good.  That’s the good news from Pfizer. Moderna is also ready to supply us with the vaccine, if we want to,” Romualdez said.

He said the pharmaceutical firms want to know how many vaccine doses the country wants to procure. He expects the vaccines to be supplied to the country by the first quarter of 2021.

“Actually, they are not asking any minimum (order) from us. They just have to secure an approval and (if) we tell them what we need, they are ready to supply,” Romualdez said.

He expressed belief that the US readiness to give the Philippines access to the vaccines would not change even under the administration of President-elect Joe Biden.

Romualdez said he has been in constant communication with the Philippine representative of Pfizer as well as other pharmaceutical groups.

He said Pfizer’s country manager is in talks with the DOH,  Food and Drug Administration and the Philippine International Trading Corp. for a government-to-government agreement on vaccine supply.

Aside from US companies, the government is also planning to procure some 13 million to 15 million vaccines from UK-based pharmaceutical firm AstraZeneca. Ten million doses will be for frontliners, Galvez said.

Based on the evaluation of VEP, AstraZeneca is “green” – meaning it received good evaluation from the experts.

“We already have three engagements with them and they have also presented their company profile.  They said that their goal in developing vaccines is for the poor countries to have access to these vaccines,” Galvez said.

He noted that the company has committed that its vaccine development is “non-profit” and its vaccines will be priced the lowest, at $5 per dose.

On Tuesday night, Duterte said in a recorded briefing that Finance Secretary Carlos Dominguez III will borrow $300 million – a big amount – to procure vaccines for COVID-19.

However, he noted that other governments would prioritize their own people when it comes to vaccine supply.

"The vaccine is here. It's being sold. Not good to assume there's a black market for that…So makapabili tayo. But I think it would do us well to realize that unahin talaga nila mga tao nila," the President said.

Duterte added vaccines might still be a bit expensive as he has promised, the government would purchase them for the Filipinos.

He stressed the poor would be given first as those in the upper brackets could afford to buy the vaccines for themselves.

On Monday, Nov. 9, Roque said Duterte approved the roadmap for the purchase and distribution of COVID-19 vaccines as part of the government’s efforts to revive the pandemic-battered economy.

“The availability of the vaccine will be a game changer, where we go from avoidance to actively minimizing the threat of the infection,” Roque stressed.

The roadmap is composed of seven stages: scientific evaluation and selection; access and acquisition; procurement and financing process; production, shipment and storage; distribution and deployment; implementation and nation-wide vaccination; and assessment, evaluation and monitoring.

The administration aims to complete the procurement process, production, shipment and storage of vaccines, hold early planning on distribution and deployment, complete implementation plans, and evaluate and monitor the plans by the end of the first quarter of 2021.

Roque said the procurement service of the Department  of Budget and Management would procure vaccines through various mechanisms allowed through bilateral, multilateral and other financial modalities. 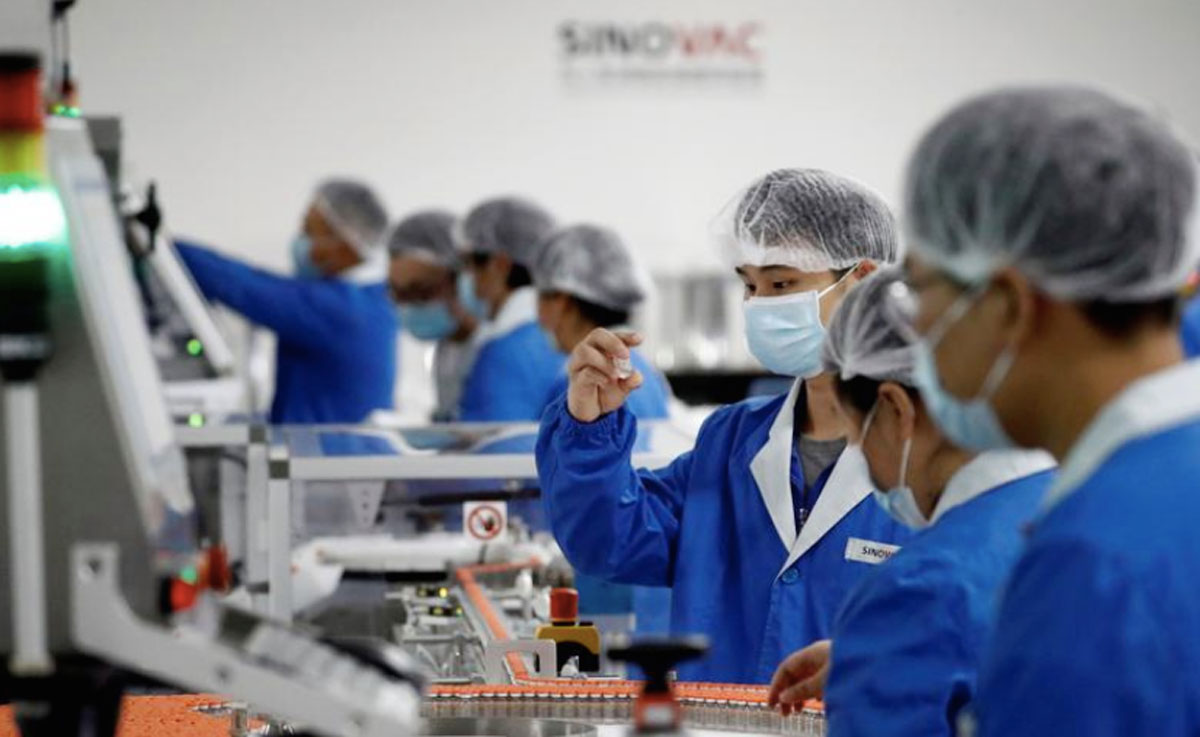 China and Russia are on top of the list of priorities for possible bilateral arrangements for the purchase of vaccines, according to a presentation distributed to the media.

Other countries in the priority list are the US, Japan, South Korea, India, Israel, Singapore, Germany and Association of Southeast Asian Nations (ASEAN) countries.

The multilateral modes being considered are pooled procurement with ASEAN countries as well as purchases arranged by the World Bank, Asian Development Bank, United Nations Children’s Fund and other groups.

“All Filipinos should have the vaccine, without exception,” Roque said.

Work to distribute the experimental COVID-19 vaccine developed by Pfizer and BioNTech is gearing up after the companies announced successful interim data earlier on Monday, but it will not be coming to local pharmacies for the general public any time soon.

The announcement sent US stocks to record highs.

Pfizer and BioNTech need to get regulators to sign off on the shot before it can start shipping vaccines to those considered most in need by government. Healthcare workers and people living in nursing homes will likely top that list.

But the vaccine’s complex and super-cold storage requirements are an obstacle for even the most sophisticated hospitals in the US, and may impact when and where it is available in rural areas or poor countries where resources are tight.

The main issue is that the vaccine, which is based on a novel technology that uses synthetic mRNA to activate the immune system against the virus, needs to be kept at minus 70 degrees Celsius or below.

“The cold chain is going to be one of the most challenging aspects of delivery of this vaccination,” said Amesh Adalja, senior scholar at Johns Hopkins Center for Health Security. “This will be a challenge in all settings because hospitals even in big cities do not have storage facilities for a vaccine at that ultra-low temperature.”

Indeed, one of the most prestigious US hospitals, the Mayo Clinic in Rochester, Minnesota, said it does not currently have that capability.

“We’re talking about a vaccine that needs storage at minus 70 or 80. That’s a tremendous logistical issue not only in the US but outside the Western world,” said Dr. Gregory Poland, a virologist and vaccine researcher with the Mayo Clinic.

“We’re a major medical center and we don’t have storage capacity like this. That will be true for everybody. This is a logistical obstacle,” he said.

Pfizer spokeswoman Kim Bencker said the company was working closely with the US government and state officials on how to ship the vaccine from its distribution centers in the US, Germany and Belgium around the globe.

The detailed plan includes using dry ice to transport frozen vaccine vials by both air and land at their recommended temperatures for up to 10 days, she said.

State and local healthcare providers are responsible for storing and administering vaccines once delivered.

They can be kept in an ultra-low temperature freezer for up to six months, or for five days at two to eight degrees Celsius – a type of refrigeration commonly available at hospitals, Bencker said.

The Pfizer storage units can also be refilled with ice for up to 15 days, she said.

But shots will spoil in around five days at normal refrigeration temperatures of slightly above freezing. BioNTech chief executive officer Ugur Sahin told Reuters the companies are analyzing if they can extend that for two weeks.

The vaccine of Moderna, which is working on a vaccine based on similar technology, does not need to be stored at such a low temperature.

Other vaccines including ones from Johnson & Johnson and Novavax can be stored at two to eight degrees Celsius, the temperature of a regular refrigerator.

Northwell Health, a major hospital system in New York, is expanding its ultra-cold storage capacity. Although it is possible to deploy the vaccine before it spoils, Northwell chief pharmacy officer Onisis Stefas said the hospital decided the freezer access would ensure a smooth rollout.

According to experts, the cold storage requirements could impede Pfizer’s ability to reach rural healthcare systems and nursing homes, or less wealthy nations, which may not have the funds for the refrigeration units.

“If Pfizer’s is the only vaccine to be authorized in the next few months, we do worry about equity when it comes to spreading it to rural areas,” said Claire Hannan, executive director at the Association of Immunization Managers, a lobbying group for local public health officials who handle vaccines.

Some states have said they have a shortage of ultra-cold freezers, according to public documents that states filed with the US Centers for Disease Control and Prevention.

New Hampshire has purchased extra ultra-cold freezers and like other states is lobbying the Trump administration for additional funds, the documents show.

California has also said ultra-cold freezer supplies are limited and roughly half of the states’ health departments are looking into purchasing or leasing additional cold storage supplies.

It has proposed building a distribution network of ultra-cold freezers, including mobile vaccination clinics, to reach underserved areas around the state. California said it would not provide vaccine supplies to facilities without adequate cold-storage capabilities.

Without the extra equipment, doctors will have a dilemma: store vaccines in standard refrigerators and deploy all 975 doses in each Pfizer vaccine container in less than five days, or restock them with dry ice and open them only twice a day to extend the vaccines’ life span, Hannan noted.

“I think it will be difficult, but based on the task and how important it is, people will do the best to their ability to make that happen,” Stefas said. – With Alexis Romero, Reuters