THROWBACK: When Duterte Honored Ninoy Aquino As A Patriot Who Inspired People Power

“History is witness to how Ninoy’s work as a journalist and a politician drove him to effect positive and meaningful changes in our society. Throughout his career, he fought for what is right and just,” President Duterte said in 2017. 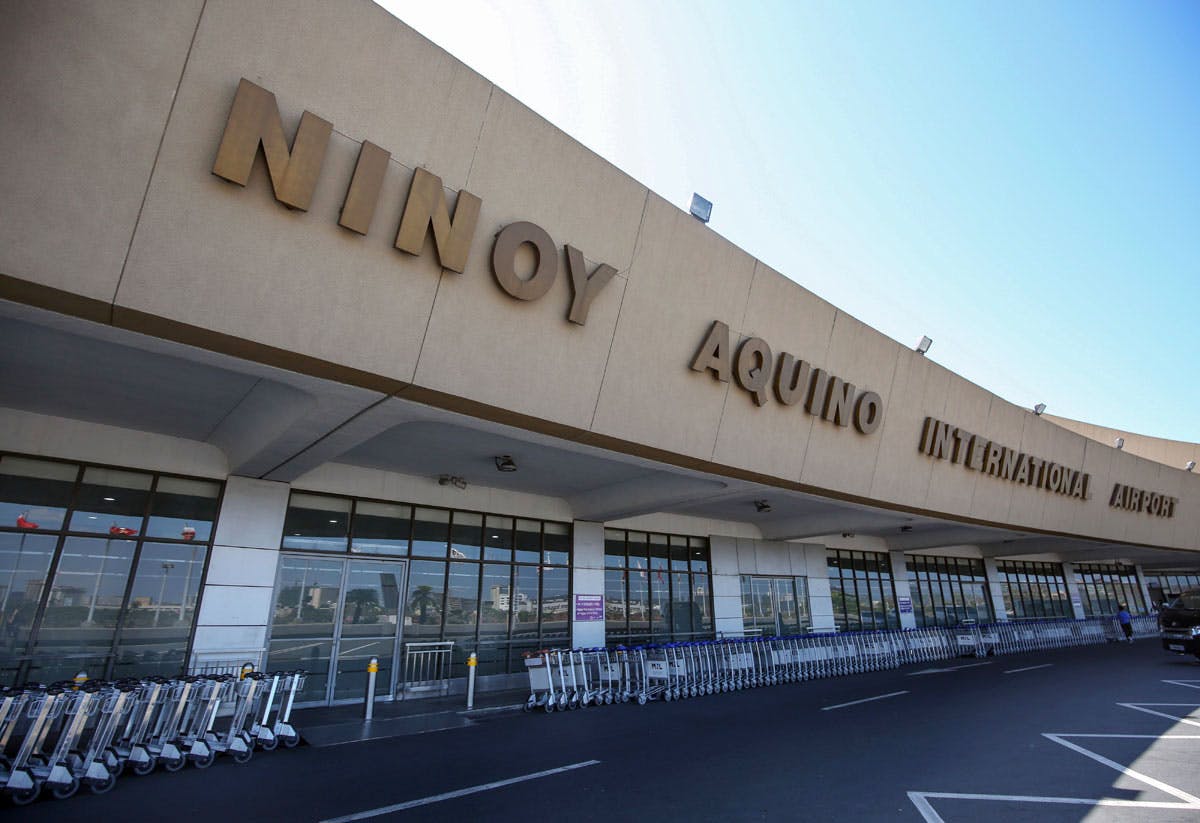 The Ninoy Aquino International Airport is idle on March 26, 2020 as travel restrictions were imposed as a preventive measure against the coronavirus disease 2019. Photo by KJ Rosales, The Philippine STAR

Davao City 1st District Rep. Paolo Duterte, joined by two allies, has filed a bill seeking to rename the Ninoy Aquino International Airport (NAIA) as the Paliparang Pandaigdig ng Pilipinas (PPP) – drawing flak on social media due to the timing of the move as well as concerns that it was another step toward erasing the horrors of the Marcos dictatorship from history.

President Duterte’s eldest son, together with Reps. Lord Allan Jay Velasco (Marinduque) and Eric Go Yap (ACT-CIS), filed House Bill 7031 on Thursday, June 25, which seeks to change the name of the NAIA. Velasco is the incoming speaker of the House of Representatives.

In a joint statement issued on the same day, the proponents explained: “We need a more representative branding for the international gateway of our country, thus our proposal renaming NAIA to the Paliparang Pandaigdig ng Pilipinas.”

They added: “Aside from it bearing our country’s name, it is in our national language. We want it to reflect the legacy of the Filipino people, our everyday heroes. The name bears no color, no political agenda. It only signifies our warmth as Filipinos in welcoming our own kababayans and foreign visitors.”

Freedom fighter Benigno “Ninoy” Aquino Jr. was slain on the tarmac of what was then called the Manila International Airport on Aug. 21, 1983. The former senator returned from the United States after three years of self-imposed exile. According to Aquino, he wanted to go home to help the members of the opposition prepare for the elections in1984 under then dictator Ferdinand Marcos.

Some Filipinos online, puzzled by the priorities of the bill’s proponents amid the ongoing coronavirus disease 2019 pandemic, mocked the proposed name by using the acronyms “PaPaPi,” in reference to actor Piolo Pascual. Others imitated President Duterte’s notoriously off-color sense of humor and thought of the moniker “PP ng Pilipinas” – the Philippines’ vagina.

Many of those who criticized the proposal stressed that Paolo Duterte and his allies should focus on the people dying and suffering due to the pandemic.

President Duterte himself, in at least three public statements, called on the Filipino people to remember Aquino as a patriot who made sacrifices for the “freedoms we now enjoy.”

Duterte did not issue a message during the 2016 commemoration of Ninoy Aquino Day, which marks the anniversary of the Aug. 21, 1983 assassination of the former opposition leader.

The anniversary was marked just two weeks after Duterte issued on Aug. 7, 2016 an order for the burial of Marcos’ remains at the Libingan ng mga Bayani. He ignored the July 12, 2016 study of the National Historical Commission of the Philippines that spoke of Marcos’ lies regarding his military record.

“As a former soldier and former president of the Philippines, I see nothing wrong in having Marcos buried at the Libingan ng mga Bayani,” Duterte said.

A sneak burial was eventually held on Nov. 18, 2016, 10 days after the Supreme Court dismissed the petitions of the victims of human rights abuses under the dictatorship.

In 2017, Duterte heaped praises on Aquino. Even though he was an ally of the Marcos family, he tacitly acknowledged the abuses of the dictatorship.

“Even at a time when hope was lost, (Aquino) remained steadfast in his struggle to restore democracy through non-violent means,” Duterte said. “His deeds have taught us that we should always aspire for the common good – even if one must go against the grain – and do what is necessary.”

President Duterte even noted that Aquino inspired “a peaceful revolution that resulted (in) the liberties we enjoy today,” referring to the people power uprising that ended Marcos’ rule for more than two decades and led to his exile on Feb. 25, 1986.

“Through his words of wisdom, let us reflect on his life and realize that, indeed, the Filipino is worthy dying for,” said President Duterte, echoing Aquino’s famous line.

Notably, this Ninoy Aquino Day message cannot be found on the official website of the Presidential Communications Operations Office or in the Official Gazette, which archive transcripts of all the President’s speeches, press briefings and public statements. 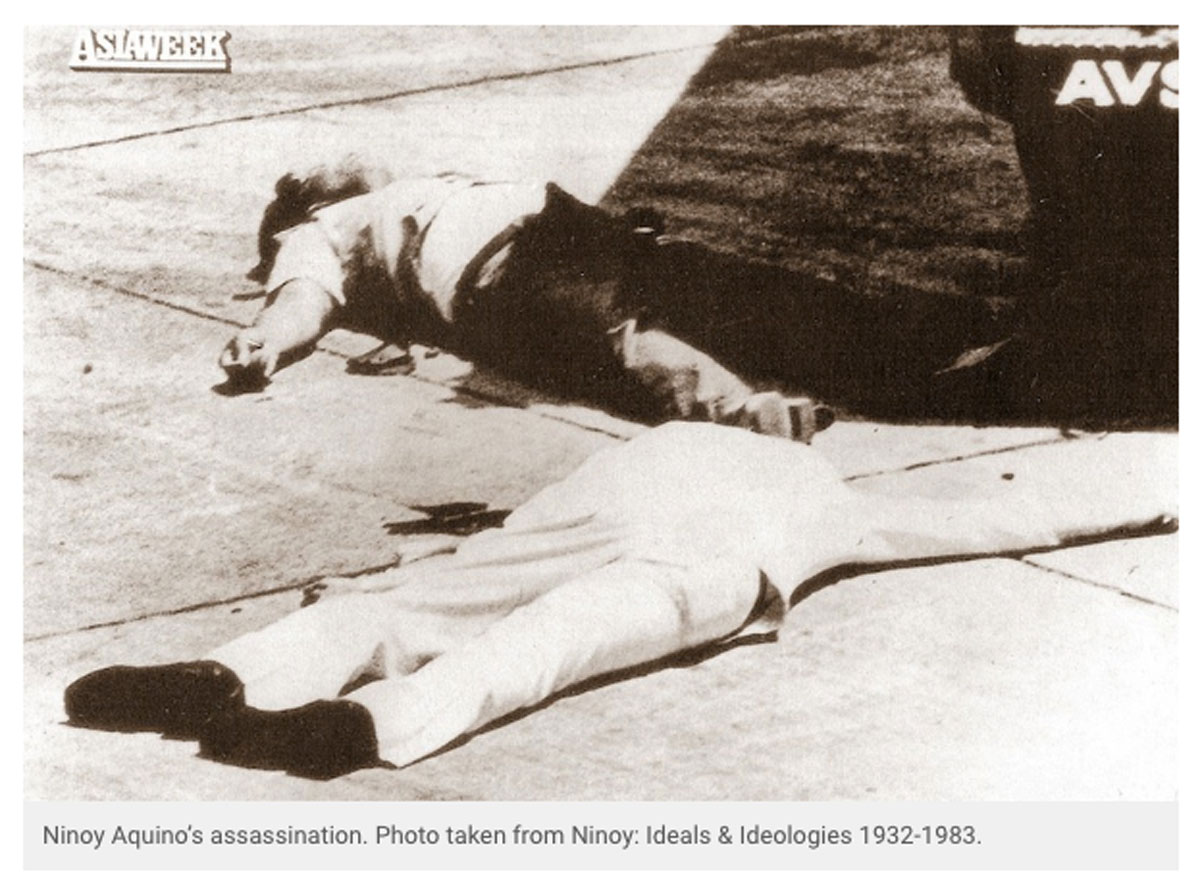 “History is witness to how Ninoy’s work as a journalist and a politician drove him to effect positive and meaningful changes in our society. Throughout his career, he fought for what is right and just. Up until the very end of his life, he inspired a peaceful revolution that resulted in the liberties we enjoy today,” the President stated in his 2017 message.

“May this year’s commemoration continue to strengthen his legacy of promoting solidarity and patriotism among our people especially in these troubling times,” the Chief Executive said.

The following year, Duterte issued a similarly worded message that spoke of the “revolution that altered the course of our nation’s history and gave birth to the freedoms we enjoy today.” 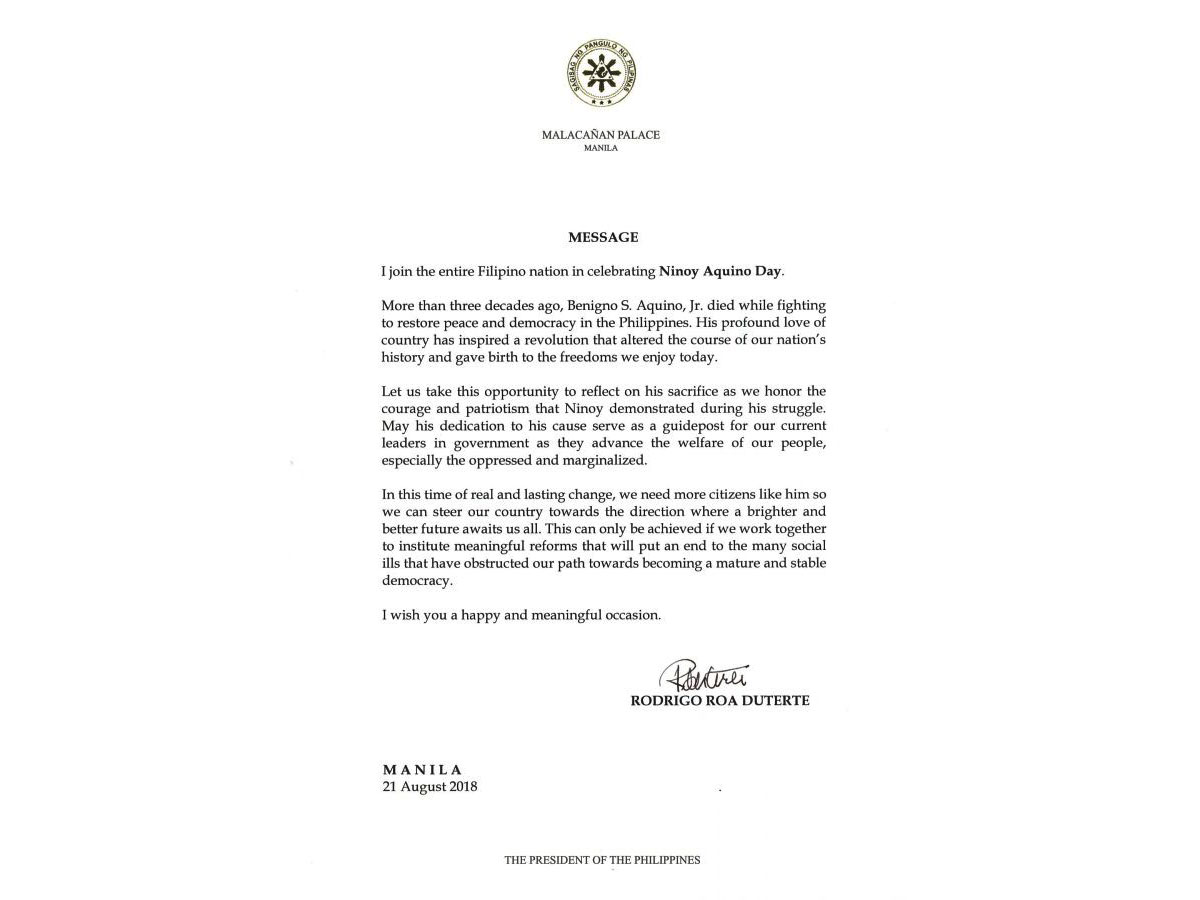 He said Aquino’s “dedication” should “serve as a guidepost for our current leaders in government as they advance the welfare of our people, especially the oppressed and the marginalized.”

Duterte said the country needed “more citizens like (Aquino) so we can steer our country towards the direction where a brighter and better future awaits us all,” and stressed the need to work together to “put an end to the many social ills that have obstructed our path towards becoming a mature and stable democracy.”

In 2019, Duterte commended Aquino for his “important role in restoring our democratic institutions more than three decades ago.”

“His sacrifice altered the course of our nation’s history and still continues to ignite the spirit of heroism among our people,” President Duterte said, adding that the people should be reminded of “what we had lost so that we may remain committed to our solemn duty to safeguard the freedoms that we now enjoy.”

President Duterte said at the time that there was “still a lot that needs to be done” to eliminate the problems of poverty, corruption and injustice that plagued the country “even during Ninoy’s time.”

“Let his example guide us as we strive to uplift and protect the most vulnerable in our society and ensure that all Filipinos will enjoy the blessings of freedom, democracy and the rule of law,” he said. 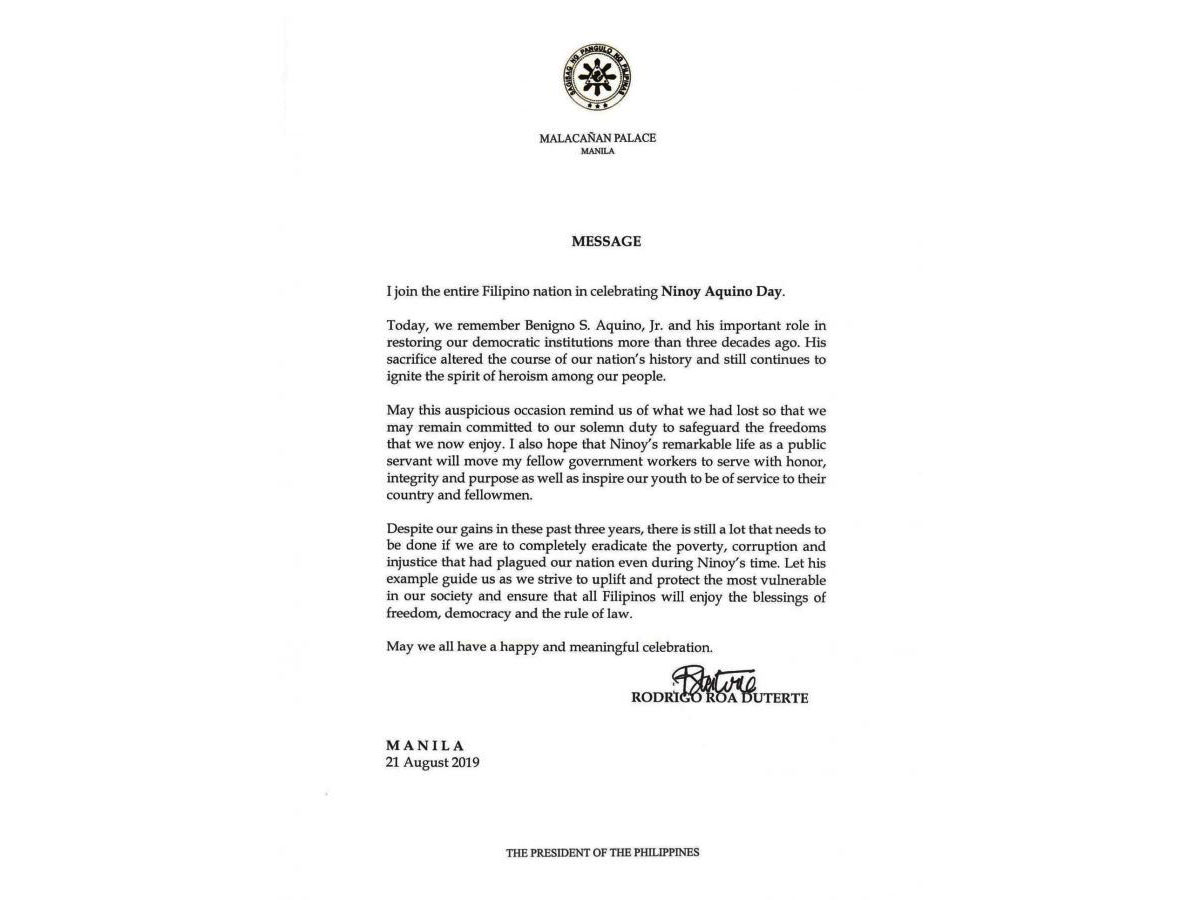 The NAIA got its current name after Republic Act No. 6639 became law “without executive approval” of Aquino’s widow, Corazon, then the country’s president, on Nov. 27, 1987. This meant she let the bill lapse into law after the 30-day deadline, without either approving or vetoing it.

Corazon Aquino continued the fight of her slain husband and challenged Marcos during the 1985 snap elections, which was reportedly marred with fraud. This and other events, including the killing of her husband, led to people power in February 1986 that eventually catapulted her to the presidency.

The measure arose from House Bill No. 47, which was filed on July 29, 1987 by then Northern Samar 1st District Rep. Raul Daza – a politician who had been active in public service continuously from the time of Marcos to Duterte. The House of Representatives managed to pass the bill on Aug. 10, 1987, or within less than two weeks.

A Freeman editorial, a newspaper in Cebu, pointed out that the proposed name is a mouthful especially for those who do not speak Tagalog as a primary means of communication.

It said a majority of the people in the country do not speak Tagalog regularly and that the timing of the bill leaves a lot to be desired. “Lawmakers should focus on more important issues for now, and leave the name alone,” it noted.