Lawyers are facing an uphill battle in their attempt to overturn the dismissal of criminal cases filed in connection with the death of photojournalist Reynaldo Momay, the 58th victim of the Maguindanao massacre. 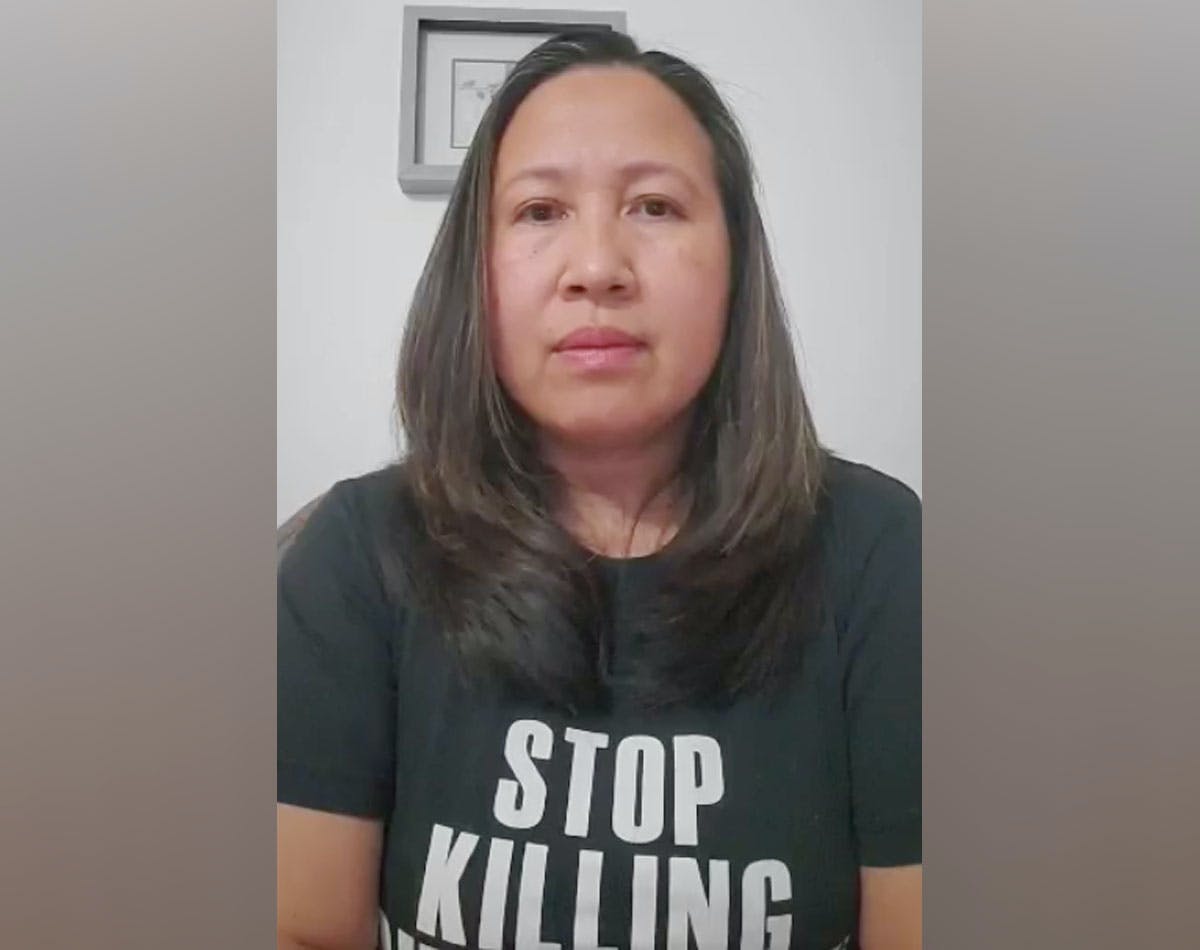 The daughter of the late photojournalist Reynaldo Momay, Reynafe speaks with The Philippine STAR from the United States via a video call on the eve of the promulgation of the decision on the Maguindanao massacre case on Dec. 19, 2019.

The trial of the century may be over, but the quest for justice for the death of photojournalist Reynaldo Momay, the 58th victim of the Maguindanao massacre, continues.

Lawyers of the Butuyan and Rayel Law Offices, representing the heirs of Momay, have formally informed Quezon City Judge Jocelyn Solis-Reyes that they would challenge the dismissal of both the civil and criminal cases filed in connection with his death.

While the appeal appears to be straightforward, the lawyers recognize an uphill battle ahead: aside from disputing the findings of the court, they will also have to challenge an existing doctrine that has been in place for over a century.

In their seven-page notice of appeal dated Jan. 2, the lawyers said they recognize the jurisprudence that treats the appeal of an acquittal as a violation of the doctrine against double jeopardy.

But they said the case of Momay provides a perfect opportunity to challenge what they dubbed as a “colonially imposed alien doctrine.”

The notice of appeal argues that the doctrine was an imposition of the United States as a colonial power over the Philippines, pointing out that it was based on a 1904 case against American lawyer Thomas Kepner, who was acquitted by a Philippine trial court of charges of stealing funds from his client.

The Philippine Supreme Court at the time reversed the acquittal, but it was overturned by the US Supreme Court in Washington, which said that the initial acquittal by the trial court barred any appeal under the American concept of double jeopardy.

“The said American concept of double jeopardy as imposed upon the Philippines by virtue of Kepner vs US decision is premised on a jury trial which is practiced in the United States but alien to the Philippines,” read the notice of appeal, which was signed by lawyer Gilbert Andres.

“The imposition of the said doctrine in the Philippines and its continuing use in this country – even after the Philippines gained independence and had its own sovereign constitution – violates the constitutional provisions on equal protection and due process,” it added.

Lawyers representing Momay’s heirs said the Supreme Court has not been given a chance to revisit and review the matter since the Philippines gained independence in 1945.

In 2018, Ombudsman Samuel Martires issued a circular stressing that his office would no longer appeal cases that have been dismissed by the Sandiganbayan, in line with the constitutional provision on double jeopardy.

The 1987 Philippine Constitution specifically provides that “no person shall be twice put in jeopardy of punishment for the same offense. If an act is punished by law or an ordinance, conviction or acquittal under either shall constitute a bar to another prosecution for the same act.”

The Revised Rules of Criminal Procedure likewise states that “the conviction or acquittal of the accused or the dismissal of the case shall be a bar to another prosecution for the offense charged,” provided that the case was dismissed or terminated without his express consent by a court of competent jurisdiction; upon a valid complaint or information or other formal charge sufficient in form and substance to sustain a conviction; and after the accused has pleaded to the charge.

The Supreme Court has discussed the issue of double jeopardy in several decisions, although the matter involving appeals from acquittal – as claimed by Butuyan and Rayel Law Offices – has yet to be tackled. 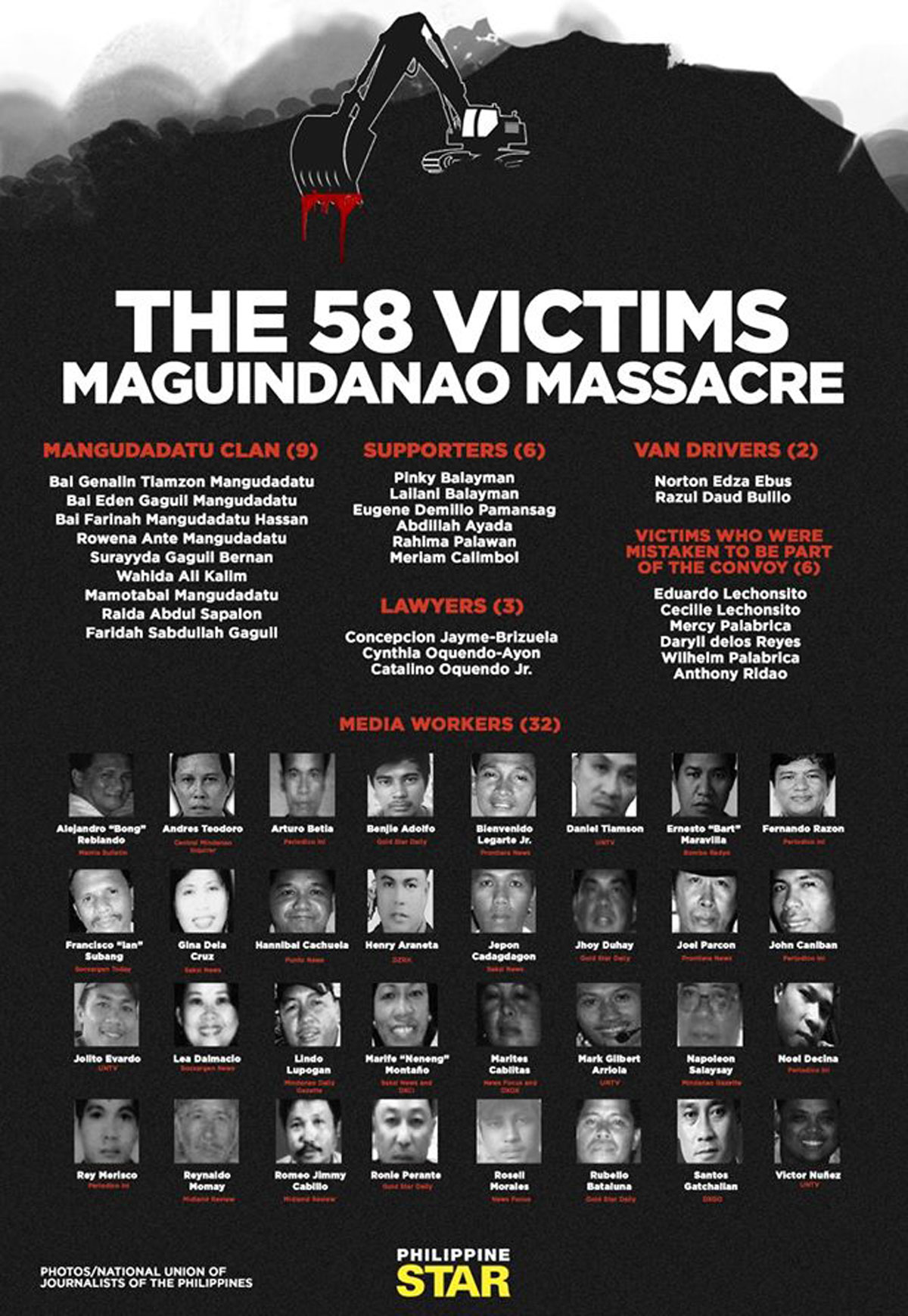 In her 761-page decision, Solis-Reyes acquitted all accused for the death of Momay, saying the prosecution failed to establish that he was indeed a victim of the massacre.

In 2012, the Department of Justice found probable cause to file the case after a team led by a forensic expert from the Commission on Human Rights verified that the dentures discovered at the massacre site belonged to Momay.

But in her ruling, Solis-Reyes noted that Momay’s death could not be ascertained as no body was found and that his death certificate was not presented.

“The evidence of the prosecution would then rely on the existence of the denture to come up with the following conclusions: (1) the denture belonged to Momay; and (2) the recovery of the denture in Sitio Masalay meant that Momay was one of the victims,” read the ruling.

“The court finds that the probative value of the denture does not lead to the aforesaid conclusions,” it added.

Assuming that the dentures were actually Momay’s, Solis-Reyes said the presence at the massacre site would not necessarily mean that Momay died at the hands of the defendants.

“This court concludes that the first element of murder – ‘that a person was killed’ – is absent in this case. The 58th count of murder will not prosper for it lacks corpus delicti,” read the ruling.

“It must be borne in mind that proof of corpus delicti is indispensable in prosecutions for felonies and offenses, such as the crime of murder. Corpus delicti is the body or substance of the crime.  It refers to the fact that a crime has been actually committed,” it added.

She consequently denied the plea for civil damages of his relatives, saying that the failure to establish his death prevents the grant of any damages to his heirs.

Momay’s daughter Ma. Reynafe Momay-Castillo earlier expressed her desire to appeal the dismissal of the criminal case filed for the death of her father.

“I don’t care about the money, I can live without the compensation,” she said after the ruling was promulgated. “I need justice.” 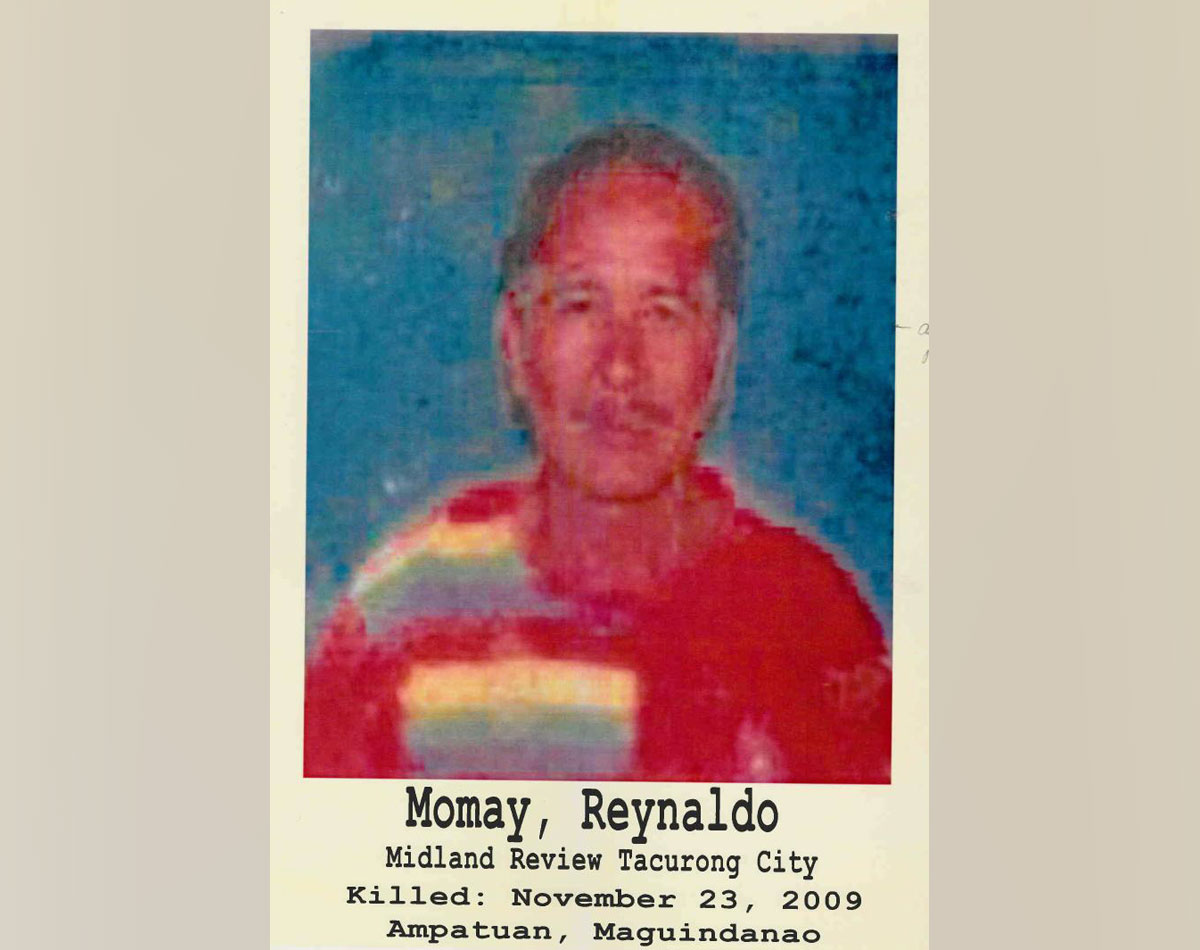 In the notice of appeal, the Butuyan and Rayel lawyers likewise said they would appeal for higher compensation for some relatives of the victims.

Lawyer Harry Roque said some of the families felt that they should be given substantially more, noting that each family should have received at least P20 million each.

Solis-Reyes ordered the principal convicts to collectively pay over P155.5 million in damages to the heirs of 57 victims.

The convicts – including five key members of the Ampatuan clan – were directed to jointly pay the families of each of the victims P100,000 in civil indemnity, P100,000 in moral damages and P100,000 in exemplary damages.

The court granted the plea for actual damages of the heirs of 12 of the 57 victims, while the others will be awarded P50,000 in temperate damages.

Some of the victims were also entitled to payment due to loss of earning capacity, ranging from P560,000 to over P23 million.