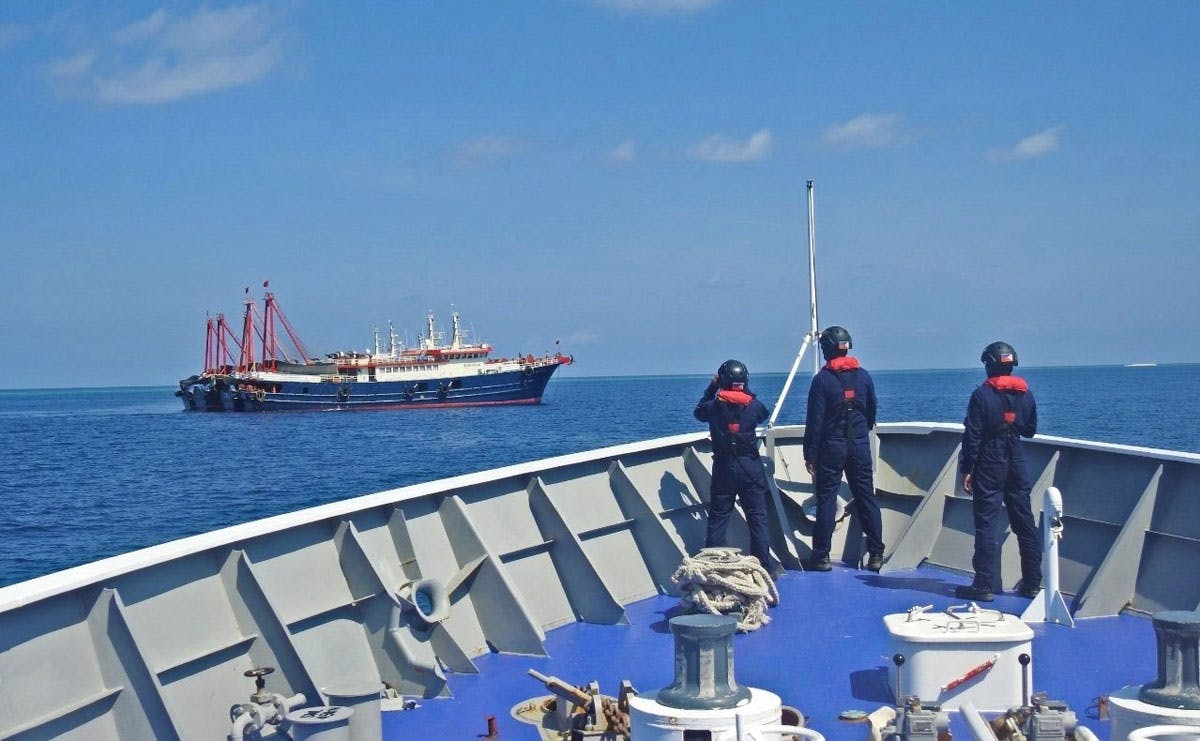 Handout photo released by the Philippine Coast Guard on May 5, 2021 shows its personnel surveying several ships believed to be Chinese maritime militia vessels in Sabina Shoal in the West Philippine Sea on April 27, 2021.

The Philippine Coast Guard (PCG) drove away seven Chinese maritime militia vessels during a patrol with the Bureau of Fisheries and Aquatic Resources (BFAR) on Sabina Shoal on April 27.

PCG spokesman Commodore Armand Balilo reported on Wednesday, May 5, that seven China maritime militia vessels (CMMVs) were spotted by BRP Cabra personnel around 9 a.m. and were radioed about their intentions within the country’s exclusive economic zone (EEZ).

“The PCG communicated with them to declare that Sabina Shoal is part of the EEZ of the Philippines. When they failed to respond to three radio communications, the PCG approached the CMMVs that immediately raised anchor and started their engines,” Balilo said in Filipino.

Balilo added the PCG and the BFAR followed the seven CMMVs to ensure they were leaving Sabina Shoal, located more than 73 miles away from Mapankal Point in Rizal, Palawan.

On April 29, the PCG also spotted three Chinese fishing vessels along with two other unidentified vessels on Sabina Shoal, but again drove them away.

Sabina Shoal is “just near” Julian Felipe Reef where Chinese CMMVs were spotted by authorities in recent months.

Balilo said the PCG and BFAR deployed two vessels in Bajo de Masinloc and five vessels in the Kalayaan Group of Islands to ensure the country’s sovereignty against foreign intruders.

“The promise of the President is no territory will be lost under his administration and that is what is happening now,” presidential spokesman Harry Roque declared.

He said the PCG’s actions in Sabina Shoal won’t affect the Philippines’ ties with China because the incident happened inside the EEZ and “we are the only ones who have rights in that area.”

The Palace spokesman also lashed back at retired Supreme Court justice Antonio Carpio who accused Duterte of “grand estafa” for claiming that he never discussed the West Philippine Sea (WPS) row during the 2016 presidential campaign.

He also claimed that the President's statement on raising the Philippine flag in the WPS was literal.

"We have to take the words of the president literally because he knows that the issue is complex," Roque said.

While 2016 arbitral ruling  voided China's wide-reaching claims in the South China Sea, Roque thinks it only made “some clarifications,” but “there is no solution yet on the dispute over islands."

Roque insisted that Duterte did not fool the voters since he is making sure that the Philippines won't lose territory during his presidency.

"As a former justice, he (Carpio) knows the elements of estafa. He is now talking as a politician and it is saddening that while we are discussing this very serious issue on territory, instead of addressing the issue, he has resorted to name-calling," the Palace spokesman said.

Carpio was responding to the expletive-laden pronouncements of Duterte against him and former foreign affairs secretary Albert del Rosario.

Duterte: ‘I Never Promised That I Would Retake The West Philippine Sea’

"Kung estapador po ang Presidente, ano ang tawag sa kanya na siya mismo ang sumulat ng desisyon kung saan nawala ang sangkatutak na territorial sea natin at internal waters? (If the President committed estafa, how should we call him, given that he wrote the decision that resulted in the loss of much of our territorial sea and internal waters)? But we will not stoop down to his level," he said.

“Here is the iron glove of independent foreign policy in my watch. Thank you, (Transportation Secretary Arthur) Tugade, thank you PCG commanders. Apologies for my harshness in not letting you directly liaise with Chinese Coast Guard because that looks like you’re taking directions from them. You are patriots,” Locsin said on Twitter.

Locsin said Filipino courage showed that “our military capabilities have nothing to do with patriotic duty to keep what’s ours by right not mythology.”

“Our President could stop this anytime but look he hasn’t. Leave us to work this out. He vowed at the UNGA (United Nations General Assembly) not to fail the Arbitral Award,” Locsin said.

The secretary was referring to Duterte’s speech before the UNGA in September last year, where he invoked the 2016 arbitral victory of the Philippines against China.

Duterte said the ruling is “now part of international law” and is “beyond compromise.”

Beijing, however, has rejected the ruling, calling it “illegal since day one.”

Armed Forces of the Philippines (AFP) spokesman Maj. Gen. Edgard Arevalo described the incident as “a good indicator” of the government’s collective efforts to address the WPS issue.

He gave reassurance the AFP will continue to conduct air and maritime sovereignty patrol missions to protect the country’s sovereignty.

Esperon, chairman of the National Task Force for the West Philippine Sea (NTF-WPS), said the ban does not cover Filipino fishermen who are allowed to freely navigate and fish in the WPS.

“This fishing ban does not apply to our fishermen and the NTF-WPS opposes China’s imposition of the same over the areas within the territory and jurisdiction of the Phil-ippines. The NTF-WPS reiterates that our fisherfolk are encouraged to go out and fish in our waters in the WPS,” Esperon said in a statement.

The ban imposed by China will last from May 1 to Aug. 16, with China’s coast guard promising to take strict measures to enforce it.

The fishing moratorium has been imposed by China since 1999 and covers areas of the South China Sea as well as other waters off China.

Esperon said that the country will continue its deployment of law enforcement patrols and other exercises to assert Philippine sovereignty, “consistent with the government’s commitment against illegal unreported and unregulated fishing, and to enforce our laws on maritime security and safety, and environmental protection.”