Duterte: ‘I Never Promised That I Would Retake The West Philippine Sea’

“I never, never in my campaign as president promised the people that I would retake the West Philippine Sea. I did not promise that I would pressure China,” President Duterte stated on Monday. 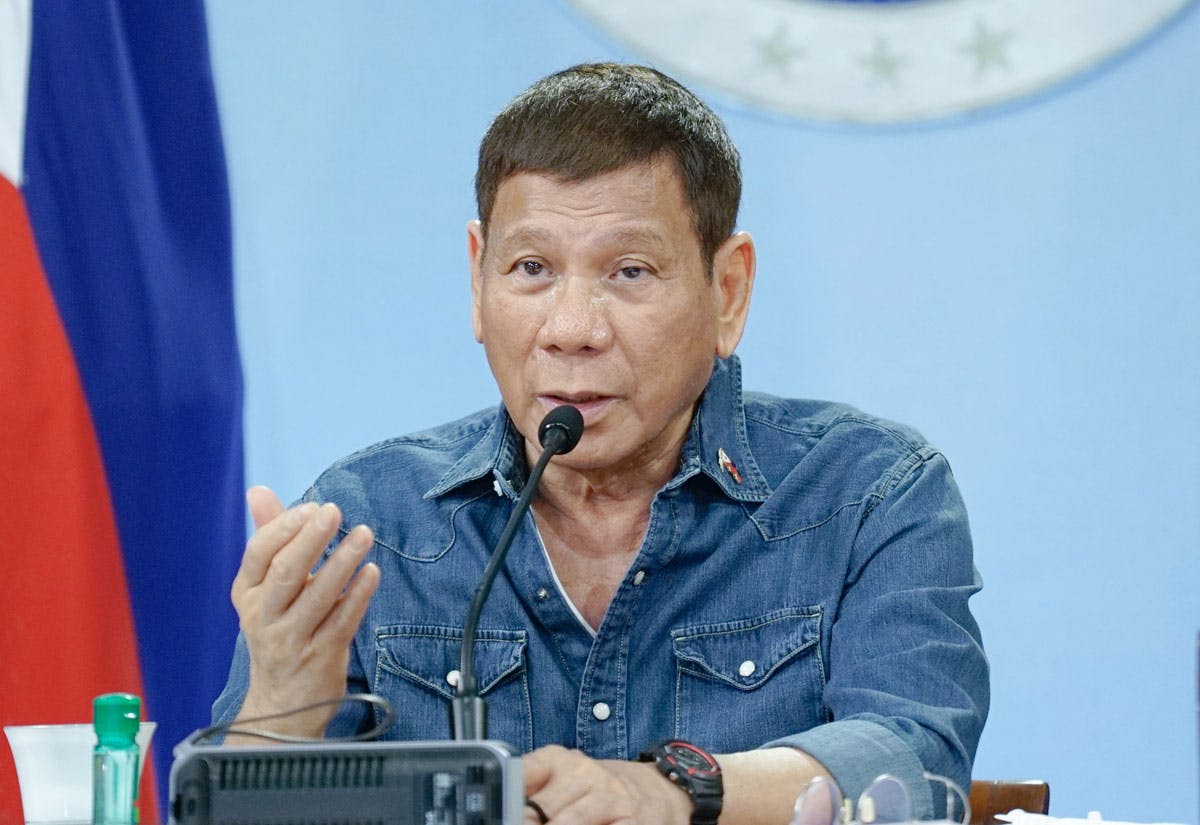 President Duterte talks to the people after holding a meeting with the Inter-Agency Task Force for the Management of Emerging Infectious Diseases core members at the Malacañang Golf (Malago) Clubhouse in Malacañang Park in Manila on May 3, 2021. Presidential photo

President Duterte claimed on Monday, May 3, that he “never” mentioned that he would “retake” the West Philippine Sea (WPS) during the campaign period.

However, it can be recalled that in a presidential debate in 2016, Duterte said he would take a jet ski to the disputed parts of the WPS while waving the Philippine flag to assert the country’s sovereignty.

Earlier on Monday, Sen. Manny Pacquiao said that during his electoral campaign, Duterte vowed to ride a jet ski and plant the Philippine flag in the WPS to confront China’s intrusions that made him as well as many Filipinos vote for him.

Read more: Pacquiao To Duterte: Do Not Buckle In Face Of China’s WPS Intrusions

At the time, Duterte declared: “Pupunta ako sa China. ‘Pag ayaw nila then I will ask the Navy to bring me to the nearest boundary diyan sa Spratlys, Scarborough. Bababa ako, sasakay ako ng jet ski, daladala ko ‘yung flag ng Filipino at pupunta ako doon sa airport nila tapos itanim ko. Then I would say, ‘this is ours and do what you want with me. Bahala na kayo.’”

During his talk to the nation on Monday night, Duterte said, “I never, never in my campaign as president promised the people that I would retake the West Philippine Sea. I did not promise that I would pressure China. I never mentioned about China and the Philippines in my campaign because that was a very serious matter.”

Duterte cited the need to have a diplomatic approach when it comes to China and that it would be up to the Department of Foreign Affairs to deal with the issues concerning foreign relations.

But the President said the Philippine vessels would have to stay put in the WPS even as China asked that they leave.

“China remains to be our benefactor… if I may just add something to the narrative, just because we have a conflict with China doesn't mean to say that we have to be rude and disrespectful. As a matter of fact, we have so many things to thank China for – the help in the past and itong mga tulong nila ngayon,” Duterte added.

In contrast, Duterte repeated his tirades against Carpio and Del Rosario as well as his claims that the country lost Scarborough Shoal and the WPS during their time.

He cursed at the two and said Del Rosario should not have asked the country’s vessel to retreat during a standoff with China in Scarborough Shoal in 2012. 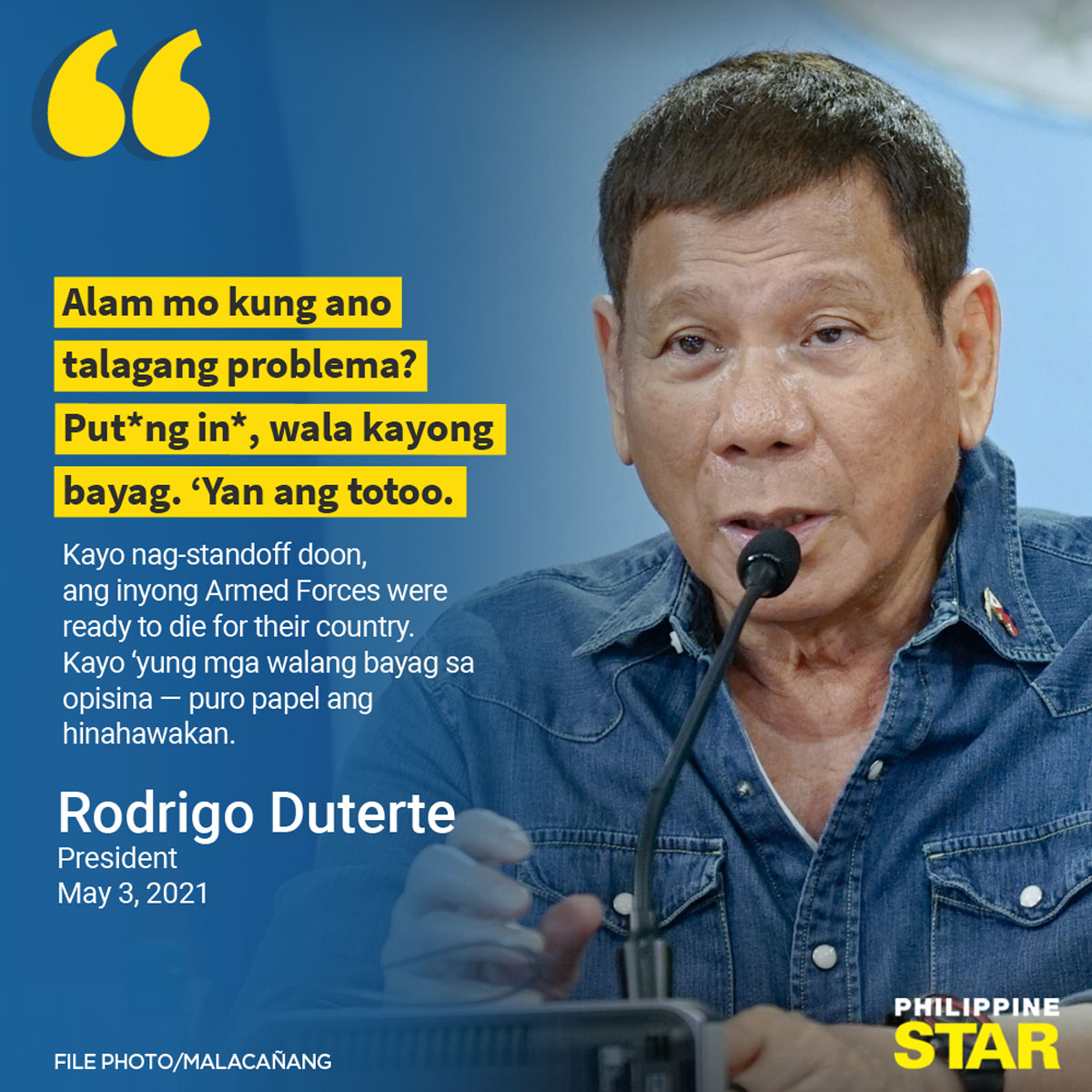 Duterte has been reiterating this issue even as Carpio and Del Rosario had been saying that nothing was lost during their time as the country won its arbitration case against China in 2016.

Duterte said Chinese President Xi Jinping told him the first time they met hat it was the “noisy” Carpio and Del Rosario who gifted China with the WPS when he brought up the issue on resources.

Duterte said Carpio and Del Rosario, whom he threatened to punch in the face, should be ready to die if he sends them to the WPS.

He added the two had the temerity to blame him for their diplomatic faux pas when it was the two of them who gave up the country’s territorial waters.

Duterte further said he told China “that I know that it (WPS) is yours according to you. I heard that several times. But you know, you must also have heard of the problem people are hungry. Ang Pilipino ay gutom (The Filipinos are hungry). And you are not oblivious for that fact. So, kindly just allow our fishermen to fish in peace and so there is no reason for trouble.”

On Sunday, May 2, Del Rosario asked the Duterte administration to explain why it seemed to be giving more importance to China than to Filipinos who were questioning its seizure of land features in the WPS.

He was reacting to Executive Secretary Salvador Medialdea’s statement lambasting him and Carpio last Saturday, May 1, for their strong stance against China’s bullying.

Malacañang had also said Duterte was “not responsible” for China’s gaining control over some land features in the WPS.

“China has been taking away our land and waters. We would like to ask, Mr. Secretary, why our fellow Filipinos are being chastised for wanting to defend our country, rather than China? Why are we giving more importance to China over that of our own people?” Del Rosario asked Medialdea in an open letter.

“On why is the President being counted upon to lead in resolving challenges to sovereignty, it is because this is what presidents must be relied upon to do. To defend what is ours is also found in our Constitution,” Del Rosario said.
Latest News
onefeed Top headlines from the OneNews network
Having problems seeing the article? View this article in your phone’s browser. (Tap the upper right corner and select “Open In…“).
Application update is available.