The often brash President Duterte struck a somewhat conciliatory tone about the United Nations – an organization he has often criticized and at times threatened to leave. 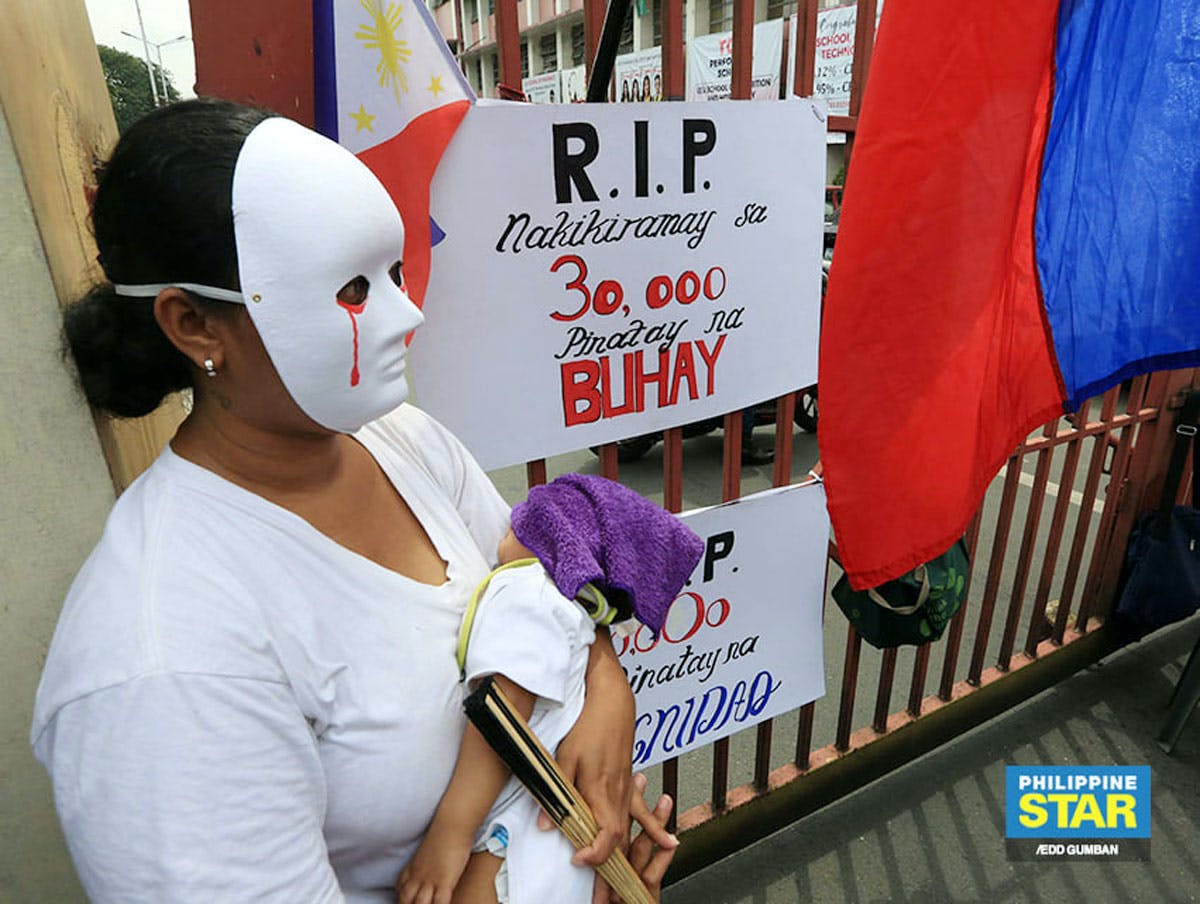 A woman joins other relatives of some of the people killed in the drug war in a prayer rally in Mendiola, Manila on Oct. 30, 2019. Photo by Edd Gumban, The Philippine STAR

President Duterte defended his drug crackdown and dismissed criticism from human rights advocates as the sometimes aggressive critic of the United Nations addressed its annual gathering of world leaders for the first time on Tuesday, Sept. 22.

But with the coronavirus taking a human and economic toll on the Philippines, the often brash Duterte also struck a somewhat conciliatory tone about the organization he has often criticized and at times threatened to leave.

“The Philippines values the role that the United Nations plays in its fight against the pandemic,” Duterte said in a prerecorded video, the meeting’s format this year because of the pandemic.

He welcomed the UN‘s launch of a relief fund and called on the international community to make sure potential vaccines are accessible to all.

“When the world finds that vaccine, access to it must not be denied nor withheld. It should be made available to all, rich and poor nations alike, as a matter of policy,” the President said.

At the same time, Duterte spotlighted Filipino healthcare workers’ contribution to the virus fight at home and around the globe.

Duterte, who took office in 2016, often lashes out at what he decries as international meddling in Philippine domestic affairs. Western governments and human rights groups see it as expressing justifiable alarm about an anti-drug crusade that has left thousands – mostly poor – suspects dead.

UN High Commissioner for Human Rights Michelle Bachelet said in June that the Philippines’ “campaign against illegal drugs is being carried out without due regard for the rule of law, due process and the human rights of people who may be using or selling drugs.” Her office called on the government to end all violence targeting suspected drug offenders.

Duterte has denied authorizing extrajudicial killings but has repeatedly and openly threatened drug dealers with death. Just this month, he publicly ordered the country’s top Customs official to shoot and kill drug smugglers. The International Criminal Court opened a preliminary probe in February 2018 into complaints about the killings; Duterte’s government responded by withdrawing from the court.

“The Philippines will continue to protect the human rights of its people, especially from the scourge of illegal drugs, criminality and terrorism,” Duterte told the High-Level General Debate of the 75th Session of the UN General Assembly, complaining that “interest groups have weaponized human rights” to discredit his government.

“A number of interest groups have weaponized human rights; some well-meaning, others ill-intentioned. They attempt to discredit the functioning institutions and mechanisms of a democratic country and a popularly elected government which in its last two years, still enjoy the same widespread approval and support,” he said.

He expressed openness  to “constructive engagement” with the UN but only if there is “objectivity, noninterference, nonselectivity and genuine dialogue.” 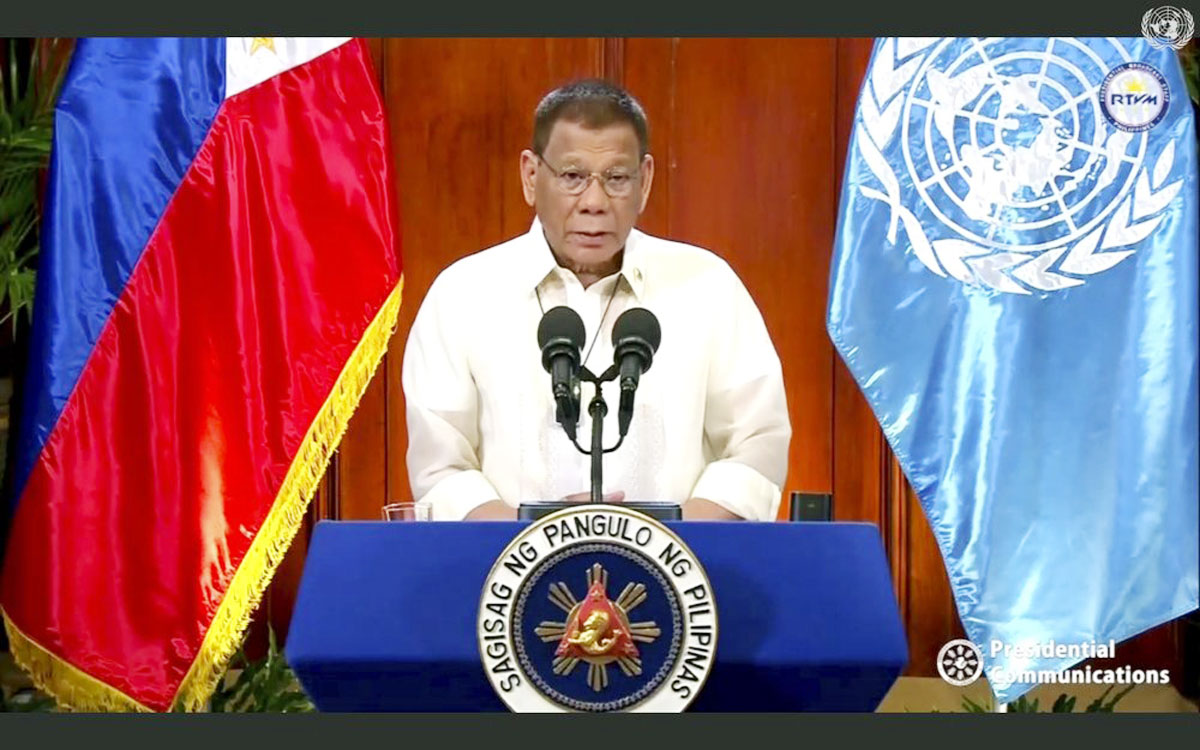 Duterte also took the opportunity to justify the highly-contested Anti-Terrorism Act (ATA) during his speech, saying the measure would address not just terrorism but also the "reckless response" to it.

"Terrorism looms large.  As I said at the Aqaba Process, the Philippines will do everything and partner with anyone who would sincerely desire to protect the innocent from terrorism in all its manifestations," Duterte said.

On Sept. 2, Duterte took part in the Aqaba Process, an initiative launched by Jordanian King Abdullah II in 2015 to strengthen international and regional cooperation against the dangers of terrorism, radicalization and violent extremism through a holistic approach.

"Our 2020 Anti-Terrorism Act shores up the legal framework by focusing on both terrorism and the usual reckless response to it," Duterte noted.

About 1,000 militants and more than 160 government troopers died during the 2017 siege, which prompted Duterte to impose martial law in the entire island of Mindanao for more than two years. The five-month siege, the longest urban war in the Philippines since World War 2, displaced about 360,000 people.

Duterte said the enactment of the ATA Law complies with the strict adherence to relevant UN Security Council resolutions and the UN Global counter-terrorism strategy.

"Most importantly, we remain committed to rebuild stricken communities and address the root causes of terrorism and violent extremism in my country," he added.

Some sectors fear that the ATA will be used to run after critics of the government and to suppress civil liberties but officials deny this, saying the measure has enough safeguards against abuses.

Bachelet has also expressed concerns about the measure, saying it could have "a further chilling effect on human rights and humanitarian work, hindering support to vulnerable communities.”

A total of 37 petitions questioning the legality of the law have been filed before the Supreme Court. Among the provisions being challenged are those that allow the pre-trial detention of suspected terrorists; enumerate acts of terrorism; punish persons who threaten to commit acts of terrorism; and incite others to commit terrorism through speeches, writings, proclamations, banners or other representations.

Chief Presidential Legal Counsel Salvador Panelo previously said the law would pass the constitutional test.  He has also argued that the provisions of the law are based on the resolutions of the UN, which requires member-states to come up with their own anti-terrorism measures.

Sen. Panfilo Lacson, who chairs the Senate committee on national defense and security and one of the principal authors of the ATA, said Duterte’s defense of the law before the assembly attended by leaders of countries that continue to grapple with the threats of terrorism “made it more significant.”

Lacson described terrorism as a threat that knows no timing nor borders as shown in recent bombings in the country.

“These (attacks) led us to pass the Anti-Terrorism Act of 2020 that contains the needed legal backbone to let our security forces implement the law with efficacy and confidence, even proactively – as well as the needed safeguards to curb potential abuse and violation of the 1987 Constitution,” Lacson stressed.

Meanwhile, the UNHCR, the UN Refugee Agency, welcomed Duterte’s declaration before the UNGA of his government’s willingness to accept refugees and forcibly displaced people, including stateless Muslim minority Rohingya refugees from Myanmar.

“The doors of the Philippines are open, as they have always been, to everyone fleeing for safety, such as the Rohingyas,” Duterte said.

Since August 2017, over 700,000 Rohingya, mostly women and children, have sought safety in Bangladesh after fleeing violence and persecution in Myanmar’s Rakhine state. In recent months, over 2,000 have set out to sea in search of asylum in other states.

“UNHCR continues to call for support and humanitarian action from States and lauds the Philippines’ consistent willingness to accept the Rohingya and other forcibly displaced people in line with its commitments as a party to the 1951 Refugee Convention and its endorsement of the Global Compact on Refugees,” the agency said in a statement released on Wednesday, Sept. 23.

“The Philippine government continues to be a model for refugee protection and a leader in the region in its support for refugees, asylum-seekers and stateless persons,” UNHCR said. – With Alexis Romero, Paolo Romero