The Food and Drug Administration explained that it couldn’t give assurance that the Sinopharm vaccines are safe and effective because it only issued compassionate special permit for their use in the country. 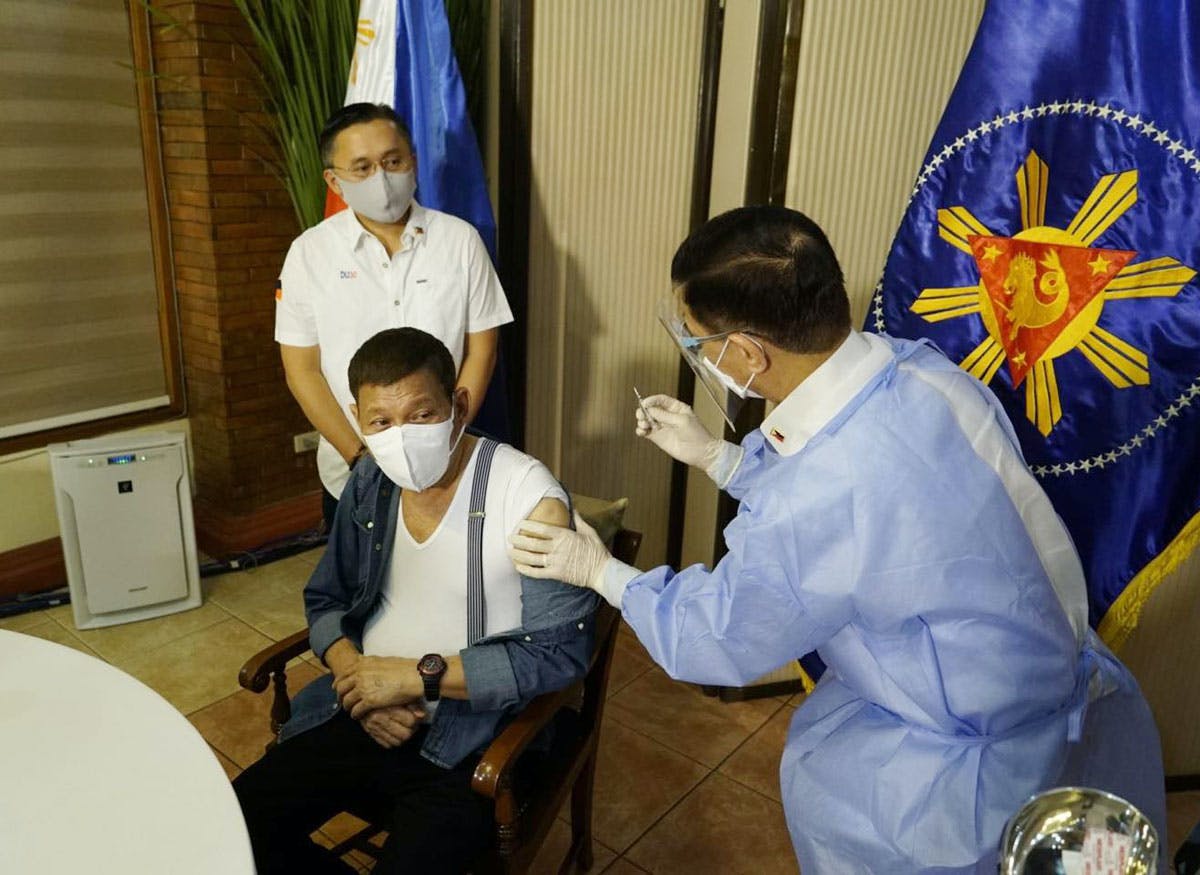 Health Secretary Francisco Duque III, clad in personal protective equipment, prepares to administer the first dose of COVID-19 vaccine made by China’s Sinopharm to President Duterte on May 3, 2021 as Sen. Christopher ‘Bong’ Go looks on. Photo from Go’s Facebook page

No evaluation has been done on the safety, efficacy and quality of the Sinopharm vaccine given to President Duterte Monday night, May 3, the Food and Drug Administration (FDA) said.

On Tuesday,  May 4, FDA director general Eric Domingo also admitted not knowing that Sinopharm vaccines had already arrived in the country until one was administered to the President.

“As of early March, we asked them to report and they told us that the vaccines have not arrived. I don’t have the full information when and how many (doses) arrived,” Domingo said.

He noted that while Sinopharm was not evaluated yet because it has not applied for emergency use authorization (EUA), the jab is covered by compassionate special permit (CSP) issued to Presidential Security Group (PSG) Station Hospital last February.

“When we give CSP, it’s very clear that we have no assurance of its safety, efficacy and quality because they were not evaluated by the FDA,” Domingo said.

He added the PSG Hospital would have to take “full responsibility” for the consequences of Sinopharm inoculations.

Earlier, Domingo said three companies sent separate letters of intent to apply for EUA but none have submitted the needed requirements, “so there is no Sinopharm application to evaluate at this point.”

Domingo also stated that FDA is facing a “blank wall” in its probe into the illegal vaccination of PSG personnel with Sinopharm jabs last year as the PSG is still not cooperating with their request for information.

“Until now, we have no lead in the investigation. We wanted to know who received the vaccines so we can monitor them,” Domingo said.

Malacañang, for its part, said Duterte did not violate any law when he had himself inoculated with the Sinopharm vaccine without FDA approval.

“The President did not commit anything illegal because (Sinopharm) has been issued (CSP) for use of the PSG Hospital and the vaccine used by the President is not smuggled because it was part of the ones donated by the Chinese government,” presidential spokesman Harry Roque said.

In March, Roque said the President would wait until the FDA issues an EUA for Sinopharm. But the delay prompted Duterte, upon consultation with his doctors, to take the Sinopharm jab already.

“What changed is the fact that the EUA has been grossly delayed, and that’s why the President, when the Chinese government donated, opted to have his vaccination,” Roque disclosed.

According to Roque, the 10,000 doses of Sinopharm vaccine covered by the CSP issued by the FDA have not yet arrived, but this special permit should cover the 1,000 doses donated by the Chinese government.

Roque added he would not know why the vaccines ordered by the PSG had not been delivered, but he could only surmise that Sinopharm should have an agent in the country to secure an EUA.

Health Secretary Francisco Duque III also defended the inoculation, saying that having the public witness the President’s vaccination will increase confidence in the jabs.

“It only means that the President believes that our vaccines are safe and effective,” Duque said.

“It has become one questionable act after another. Our regulatory processes bent in favor of those in power. This is just a sample of what we find wrong in the entire pandemic response. There are so many exceptions for VIP and people in power, while there are so many restrictions imposed on ordinary people. It is hardly science-based and reveals how cha-otic the pandemic response has been,” Bayan secretary-general Renato Reyes said. – With Rhodina Villanueva