Enforce The Law On Yourself, NCRPO Chief Told After ‘Extraordinary Birthday Celebration’

"Dura lex sed lex," which translates to “It is harsh, but it is the law” trended on Twitter as netizens slammed Metro Manila police chief Maj. Gen. Debold Sinas for being unmindful of the quarantine rules that they are supposed to enforce. 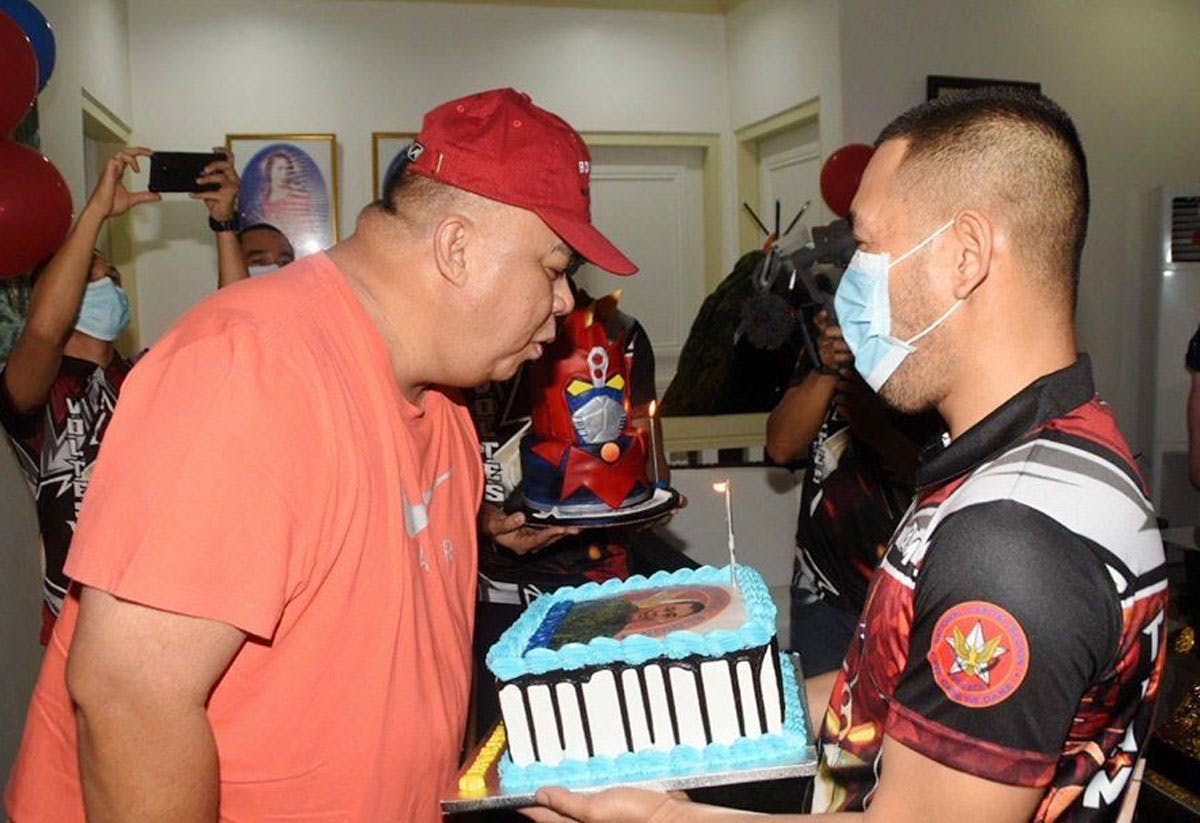 In this photo posted by the National Capital Region Police Office’s Public Information Office on Facebook, its director, Maj. Gen. Debold Sinas is presented with a cake with his face on it during his birthday celebration on May 8, 2020.

Even as more than a hundred law enforcers have been infected with the coronavirus disease 2019 (COVID-19), National Capital Region Police Office chief Maj. Gen. Debold Sinas celebrated his 55th birthday on May 8 with at least 50 mostly NCRPO personnel before visiting as many as 6,000 families around the metropolis to distribute food aid.

The controversy, which was sparked by a photo album posted on the NCRPO’s official Facebook page, serves as yet another test of the Duterte administration’s willingness to apply the law equally against violators of the stringent quarantine measures imposed for the past two months to prevent the spread of COVID-19.

The photo album – which has since been taken down – showed Sinas without a mask and around 50 other people during the celebration. He sat at a table with six others who also did not wear masks. The attendees at other tables, who wore the typical sky blue police shirt, wore masks, indicating that the event took place in the middle of a health crisis.

Another photo showed Sinas, still without a face mask unlike the other policemen, blowing the candles on a Voltes V-shaped fondant cake and another cake with his image on the icing. In another photo, he wore a surgical face mask, but bumped fists with another masked officer while holding on the other hand roses that were handed to him by his subordinates who did not wear gloves. (The contents of the album may be seen here.)

A May 8 press release, titled “Extraordinary Birthday Celebration of RD NCRPO,” was also listed in Sinas’ “Accomplishments” page in the NCRPO website.

It was not a write-up about the mañanita (early morning birthday serenade by the police), but a report that Sinas interacted with as many as 6,000 families when he distributed food aid hours later.

“In a unique, altruistic manner… Sinas opted to celebrate his birthday through the launching of NCRPO ‘Adopt an Indigent Family’ Relief Assistance Program on May 8, 2020 to the different communities of Metro Manila,” the press release stated.

Sinas was even quoted as saying: “Sharing my day and my blessings in our community is my way to give thanks to the fruitful years that has been given to me.”

This seemed to defeat the purpose of social or physical distancing and community quarantine to prevent possible unknowing carriers of the virus from spreading the disease to populations beyond their area of residence.

What the physical distancing guidelines provide

Sinas’ celebration was a departure from the move of ordinary Filipinos to cancel various milestones such as graduation ceremonies and to celebrate birthdays indoors with only the immediate family.

In these times, families cannot even say goodbye and take a last look at loved ones who pass away in the middle of the pandemic, as Department of Health regulations provide for rapid cremation and quick burial of suspected and confirmed COVID-19 cases. Relatives and friends are also prevented from attending wakes outside their neighborhoods.

Executive Order No. 112 signed by President Duterte prohibited “mass gatherings” as defined by the Inter-Agency Task Force (IATF) for the Management of Emerging Infectious Diseases.

It stressed that the definition was “not limited” to the gatherings specified above. It did not provide exceptions for government traditions such as the mañanita held for Sinas.

In practice, authorities take it to mean that events of a less important nature, such as parties and public drinking, are restricted, too. It has also served as an excuse to crack down on protest actions like that of the Bukluran ng Manggagawang Pilipino on Labor Day, even as organizers insisted that they observed quarantine guidelines by staying away from each other and wearing face masks.

In arresting alleged violators of quarantine rules, police usually cite disobedience to persons in authority, or violations of Republic Act Nos. 11332 and 11469.

Section 9(e) of RA 11332, or the Mandatory Reporting of Notifiable Diseases and Health Events of Public Concern Act, prohibits “non-cooperation of the person or entities… affected by the health event of public concern.” But the National Union of People’s Lawyers pointed out in March that the provision was vague and prone to differing interpretations and abuse by authorities.

Just like in the cases of Sen. Aquilino Pimentel III and Deputy Administrator Mocha Uson of the Overseas Workers Welfare Administration, officials tried to justify Sinas’ actions before conceding that they may have to call for a formal investigation.

He did order the PNP’s Internal Affairs Service to conduct an investigation and said that if there were really violations, “I will look into it.” But he added that “as of yet, I still trust General Sinas.”

“Nevertheless, it is not an excuse for him not to follow simple health protocols, and of course we encourage him to do so,” Gamboa said.

Interior Secretary Eduardo Año, however, admonished Sinas and described what happened as a “big no-no.”  He said Sinas should have stopped his subordinates from observing the serenade tradition. 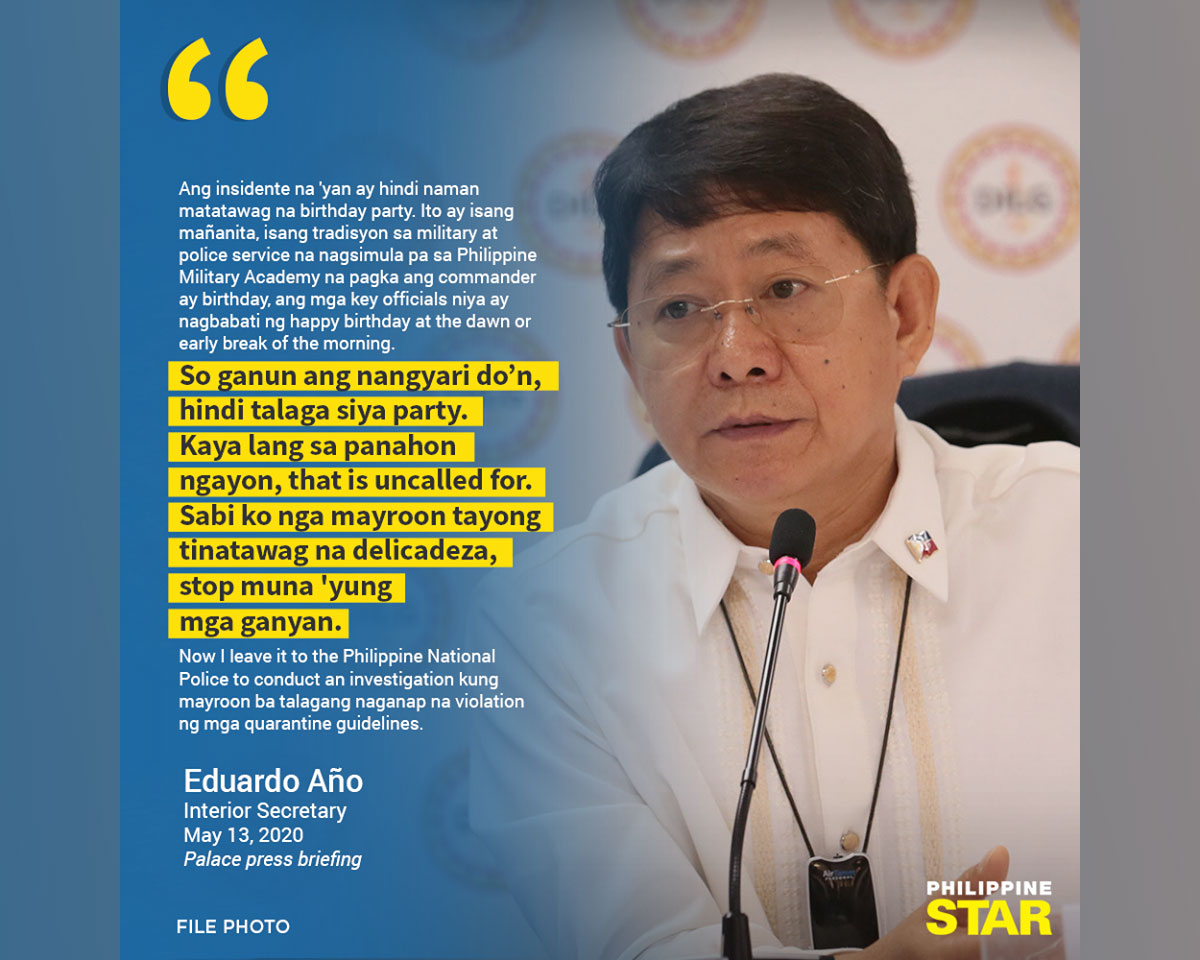 Justice Secretary Menardo Guevarra told reporters that he would order the National Bureau of Investigation (NBI) to probe the recent gathering to celebrate the birthday of Sinas.

Guevarra said there is already an existing order to the NBI to investigate violations of quarantine protocols and assured the public that the laws would be enforced fairly and uniformly.

“As you probably know, the case of Senator Pimentel is now under preliminary investigation. Local government officials have also been summoned to explain apparent violations of quarantine protocols. I will instruct the NBI to include more recent cases of alleged quarantine violations by some personalities, if the NBI is not looking into these cases as yet. My instruction is to look into all reported cases of non-cooperation/violation of quarantine protocols, regardless of who is involved. The NBI knows who these people are," the justice chief added.

By afternoon on Wednesday, Sinas “apologized for what transpired during my birthday that caused anxiety to the public.” He admitted to being “overjoyed” and “caught up” in the tradition observed by his men, but argued that “my accommodation to them was done with all cautiousness.”

Sinas admitted that the subordinates were still ordered to “prepare for the simultaneous relief distribution NCR-wide that day,” despite knowing that they just held a mass gathering. But he insisted: “It was never my intention to disobey any existing protocols relative to the implementation” of the enhanced community quarantine.

At the same time, Sinas tried to discredit unspecified photographs that circulated on social media, likely referring to one picture not posted in the Facebook page in which he wore the same orange shirt but drank beer together with other personnel who did not wear any masks.

“Some of my pictures circulating in the social media were edited and grabbed from old posts. The pictures may depict (themselves); however, it does not define the totality of what really happened,” Sinas said.

This quarantine controversy is not the first issue faced by Sinas. Bayan Muna Rep. Ferdinand Gaite said the investigation against Sinas should not be whitewashed – “like the investigation that cleared him of responsibility for the murder of 14 farmers” in March 2019, when he headed the PNP’s Central Visayas office and implemented Oplan Sauron.

“We have seen this before, so we will be vigilant,” Gaite said in a statement. “This is what happens when a President encourages his men to act with impunity. They think and act as if they are above the law.”

Noting that Sinas should have told his men to end the party right then and there instead of enjoying the attention: Gaite said: “Law enforcers should be held to a higher standard of discipline. He should not be allowed to get away with his infraction again.”

He recalled the Labor Day arrest of 42 activists in Iloilo City, 18 in Quezon City, 10 in Marikina City and four in Valenzuela City. Some of the detained persons were set free after prosecutors found a lack of probable cause to proceed with criminal charges.

“The PNP is unrelenting in its crackdown on ordinary people for purported violations of the law and quarantine rules, which its officials and personnel are themselves breaking. This is nothing but a glaring, shameless and outrageous instance of double standard and selective justice,” Cortez said.

Former PNP chief and now Sen. Ronald "Bato" dela Rosa said Sinas should have been more cautious in his actions. 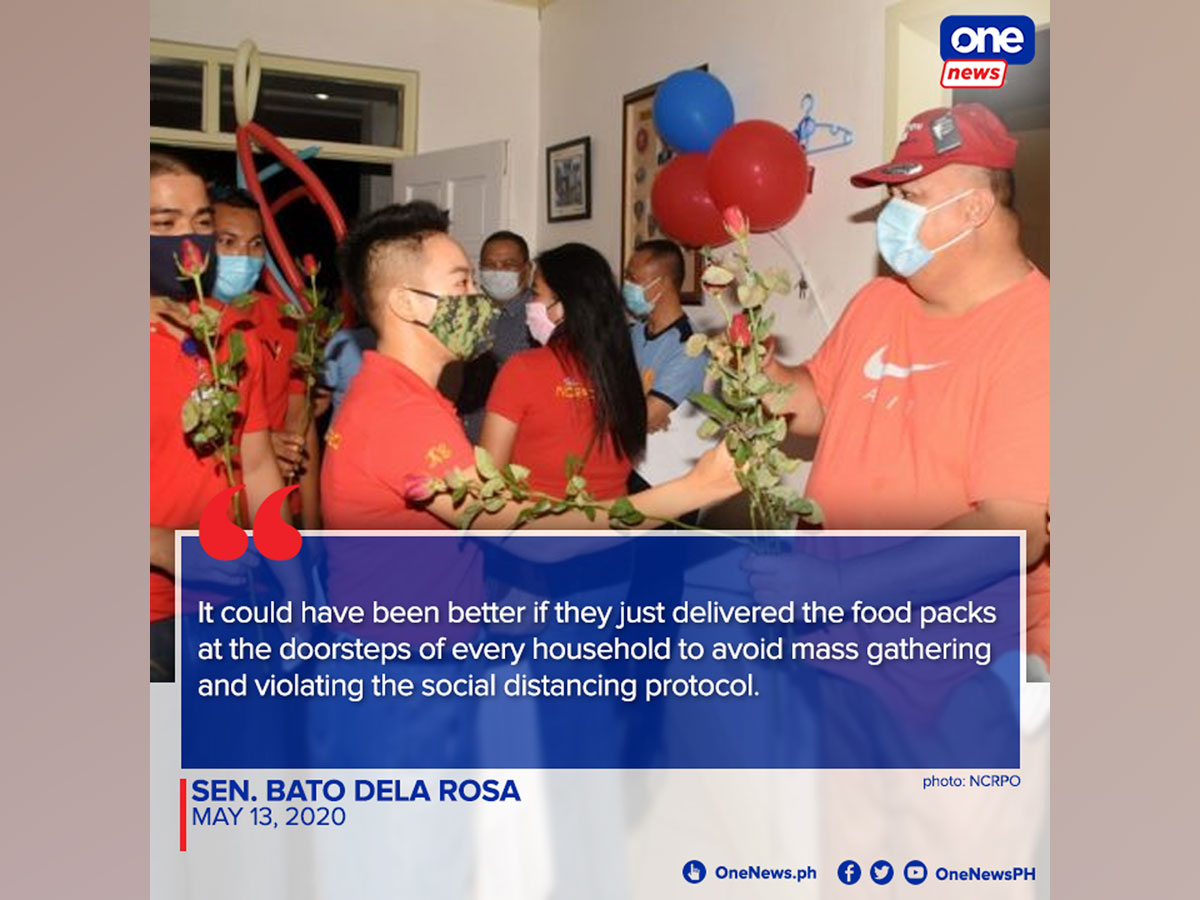 The "celebration" drew outrage and condemnation that were expressed online.

Filipinos online called out the apparent double standard, noting that the PNP and local government units have used a heavy hand in enforcing curfew ordinances and social distancing guidelines, applying them to protest actions and private efforts to distribute food to poor families.

“Law is law” became a trending topic on Twitter, with as many as 270,000 tweets on Wednesday afternoon.

This was because, just a few days earlier, the maxim “dura lex sed lex (the law may be harsh, but it is the law)” became the rallying cry of Duterte supporters and pro-administration trolls in justifying the National Telecommunications Commission’s May 5 order for ABS-CBN Corporation to stop broadcasting after the expiration of its franchise.

On April 20, Joint Task Force Coronavirus Shield commander Lt. Gen. Guillermo Eleazar also said there would be no double standard in the implementation of quarantine measures, after unit owners of the Pacific Plaza Condominium in Taguig City complained about the PNP’s warrantless intrusion into private premises.

“The ECQ guideline is plain and simple: stay at home and observe social distancing when going out of your house – anytime, anywhere, and regardless of your social status,” Eleazar said in a statement on the incident.

Sen. Francis Pangilinan went so far as to call for the arrest of the people shown celebrating Sinas’ birthday in the pictures.

“Kung seryoso sila sa pagpapatupad ng batas sa lahat, dapat sampahan ng kasong paglabag sa batas ang mga ’yan at ikulong o pagpiyansahin tulad ng libu-libo na kinulong o pinagpiyansa nila dahil sa quarantine violations (If they are serious in enforcing the law on everyone, they should be charged with violation of the law and detained or made to post bail just like the thousands they detained or made to post bail because of quarantine violations),” Pangilinan said.

Election lawyer Emil Marañon contrasted the NCRPO personnel’s partying with the killing of soldier Winston Ragos in Quezon City and the intrusions into private houses without warrants.

“Look at them – so happy and so unperturbed na nahiya ang coronavirus (that coronavirus even felt shame)! Dura lex sed lex, my foot,” Marañon said.

Meanwhile, the NCRPO removed Rappler’s police beat reporter Rambo Talabong from its official Viber group. Talabong said this was “after we reported their chief Debold Sinas violated quarantine rules by celebrating his birthday under lockdown.”

This was reminiscent of similar moves by other government agencies to curtail the coverage of a news outfit that drew the Duterte administration’s ire for its reportage of human rights abuses and corruption issues. Rappler’s Malacañang reporter Pia Ranada was banned from entering the Palace grounds in February 2018. Other government agencies did the same against other beat reporters seeking to cover non-Palace events that Duterte would attend.