President Duterte argues that US Marine Lance Corporal Joseph Scott Pemberton Pemberton deserves to be credited with good conduct time since there was no record of him misbehaving while in prison. 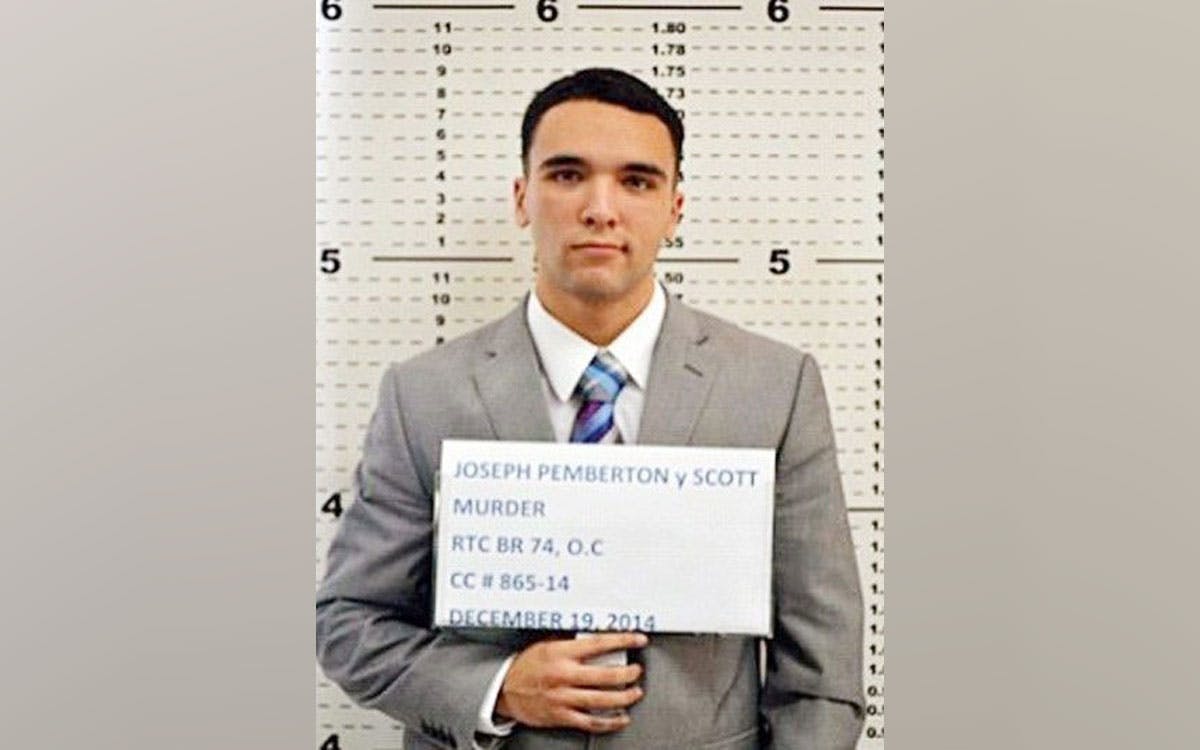 The American serviceman who was convicted for killing a transgender in Olongapo City six years ago is now a free man.

President Duterte on Monday, Sept. 7, granted absolute pardon to US Marine Lance Corporal Joseph Scott Pemberton, who was convicted of homicide over the death of transgender Jeffrey “Jennifer” Laude in 2015.

Presidential spokesman Harry Roque, who served as a lawyer for Laude’s family, said there is no need to explain why the President made the decision. He noted that the grant of pardon is “one of the most presidential of all presidential powers.”

“He can now go home because he has been granted pardon,” Roque said, referring to Pemberton.

But Duterte justified his decision to pardon Pemberton, saying it was not the American serviceman’s fault if there was no record of his conduct while in prison, or whether he stayed incarcerated at all.

Pemberton was ordered released last week by the Olongapo regional trial court based on the computation of good conduct time allowance or GCTA. Laude’s family protested the application of the GCTA in his case. Critics wondered if he had actually served time in the detention facility for special prisoners that is maintained by the Bureau of Corrections inside Camp Aguinaldo, headquarters of the Armed Forces of the Philippines.

“There is no record of whether [the number of days] he served has been counted or not. If that’s the case, it’s not the fault of Pemberton. He is not required to keep his record of his own and characterize his behavior there inside while in prison,” the President said.

“It’s not the fault of Pemberton that it was not computed,” Duterte added. “We should allow him the good character assumption.”

Duterte also argued that Pemberton deserves to be credited with good conduct time since there was no record of him misbehaving while in prison.

“The Marines could have reported otherwise to the secretary of justice, to the police... that he was shouting like a drunken man. But the presumption is, since there were no such reports, then the man did not do anything wrong. In fairness, the computation is finished, he was recommended to be released. Then release him,” the President said.

Duterte, who has previously ranted about the United States’ supposed tendency to impose its will on other countries, maintained that he is not siding with anyone when he made the decision.

“I was (reading) the newspaper, (listening to the) radio. I said, it’s not fair... I told Justice Secretary (Menardo Guevarra)... I called them, I told them earlier, it’s my decision to pardon. Correct me if I’m wrong, but that’s how I viewed the case. We have not treated Pemberton fairly. So I released him. Pardon,” Duterte said. 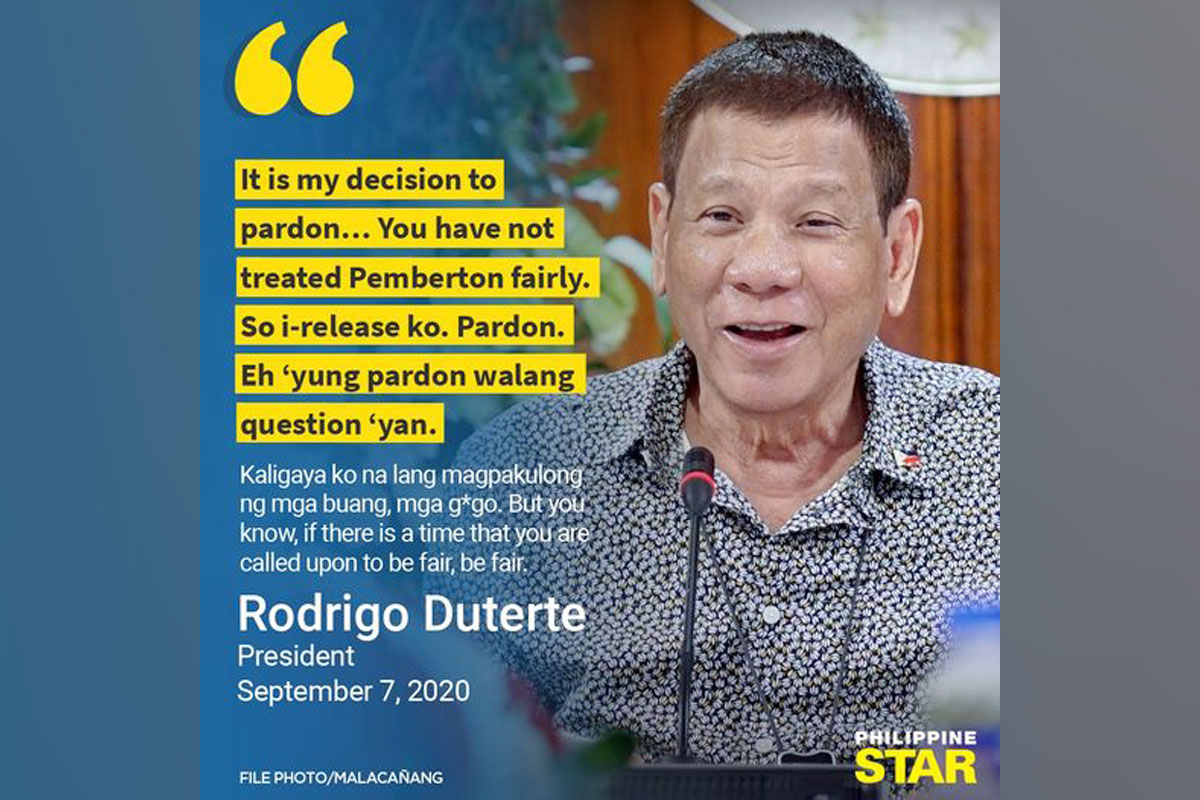 Earlier, Roque said, “Hindi na po kinakailangang bigyang dahilan ng Presidente yan dahil yung pag-grant po ng pardon at parole, ’yan naman po ang ating sinasabi, na hindi po yan katungkulan ng hudikatura, kung di katungkulan ng ehekutibo (There is no need for the President to cite reasons for doing so because the grant of pardon and parole is not within the power of the judiciary, but within the power of the executive).”

According to Roque, the grant of absolute pardon means that there are no more issues on whether Pemberton is entitled to GCTA or whether the GCTA law applies to him since he was not held in the national penitentiary.

Roque, who served as private prosecutor for the Laude family, clarified that the pardon did not erase Pemberton’s conviction.

Asked whether he thought Duterte’s decision was inconsistent with his sentiments on the United States, Roque said the President is not anti-US but is only pushing for an independent foreign policy, which considers everyone as friends.

It was Foreign Affairs Secretary Secretary Teodoro Locsin Jr. who broke the news about Duterte’s pardon of Pemberton via Twitter.

“Cutting matters short over what constitutes time served, and since where he was detained was not in the prisoner’s control – and to do justice – the President has granted an absolute pardon to Pemberton. Here at the Palace,” Locsin tweeted.

Guevarra said he was consulted by Duterte before he made the decision to grant Pemberton absolute pardon but: “Pardon is an act of grace on the part of the Chief Executive. He may exercise this plenary power of executive clemency at any time and under any circumstance.”

On Sept. 1, the Olongapo City Regional Trial Court’s Branch 74 said Pemberton could be released because he had already served the maximum 10 years of his penalty. He has served 2,142 days or over five years and eight months in prison, but he was credited with a good conduct time allowance of 1,548 days.

Roque previously said the court’s decision constituted “judicial overreach” and even claimed that Laude’s death is “symbolic of the death of Philippine sovereignty.”

Pemberton has been in prison since the October 2014 killing of Laude, whom he met at a bar while on a break from military exercises in Olongapo City.

The Laude family lawyer condemned the decision, calling it a "mockery" of the country's justice system.

"This is another injustice -- not only to Jennifer Laude and family but a grave injustice to the Filipino people," Virginia Suarez said in a statement.

"This is a travesty of Philippine sovereignty and democracy."

"If Filipinos want pardon... they need to undergo a long process. The American soldier that killed a Filipino was given an express lane," he tweeted.

The pardon came despite Duterte shifting away from the US to seek closer relations with China since assuming power in 2016. – With AFP