According to a Philippine Navy source, “we are not competing with anyone” but only trying to “regain some respect from other countries in the region, show the flag and protect our own interests in the South China Sea.” 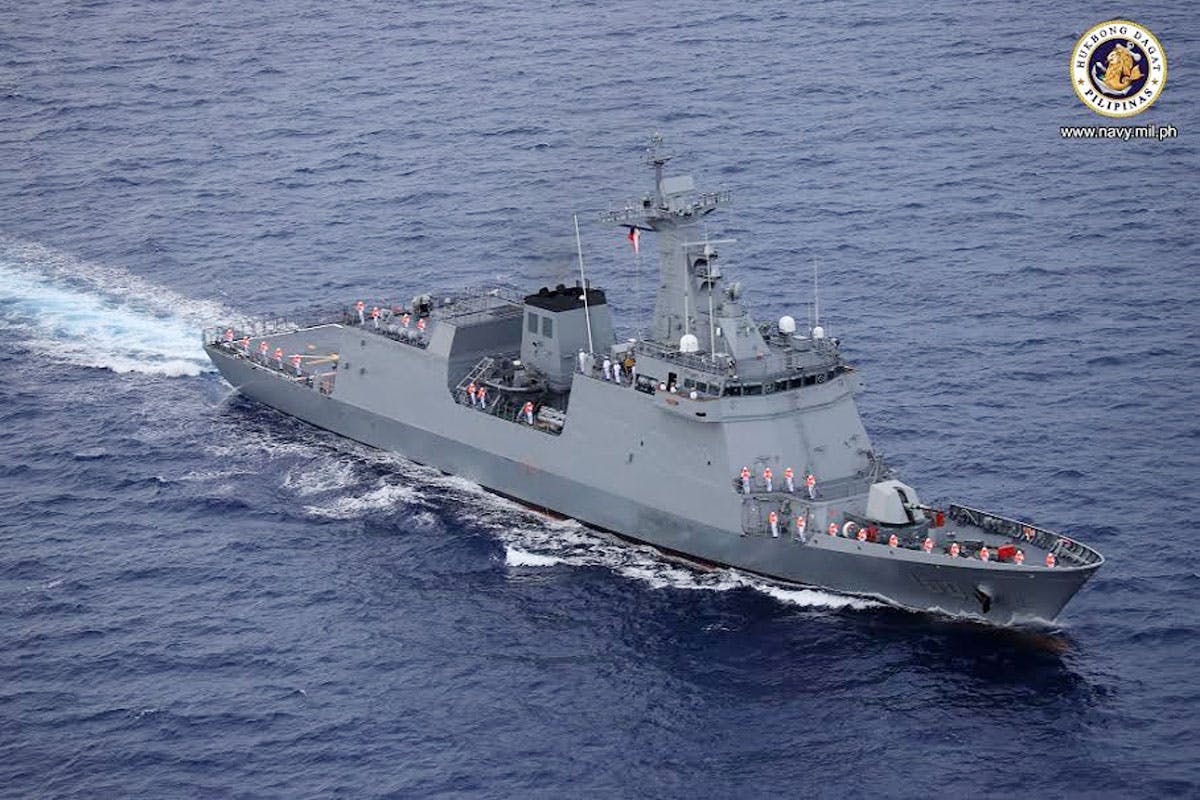 The Philippine Navy’s first missile-capable warship, which will be christened the Jose Rizal once it is commissioned to service, arrives in Subic, Zambales on May 23, 2020 after its five-day maiden voyage from Ulsan, South Korea. Photo from the Navy

The Philippines plans to spend an initial P75 billion to build a 50-ship maritime force, including short-range missile-capable smaller and faster vessels to protect the country’s security interests in the disputed South China Sea, a senior naval commander said.

About 100 other support vessels and more than 30 fixed-wing and rotary aircraft are also being considered in the Philippine Navy’s force mix that could cost the government more than P100 billion in the long term.

“These are modest upgrades to build a credible force to catch up with other neighbors in Southeast Asia,” a flag officer, who requested anonymity, said.

“We are not competing with anyone. We are only trying to regain some respect from other countries in the region, show the flag and protect our own interests in the South China Sea,” he stressed.

The South China Sea is being claimed in whole or in part by China, the Philippines, Brunei, Indonesia, Malaysia, Taiwan and Vietnam. In 2016, the Permanent Court of Arbitration in The Hague awarded the Philippines sovereign rights over several features within its exclusive economic zone in the South China Sea. The PCA also invalidated China’s “nine-dash-line” claim over nearly the entire sea.

But China, which has built artificial islands in the South China Sea, including those claimed by the Philippines and other countries, has refused to recognize the arbitral ruling.

“We have started the process of procurement and have identified specific supplies under government-to-government deals, which are faster because we need to play catch-up with the rest. We belong to a few countries that do not have missile-capable ships as well as anti-submarine warfare, mine sweeping and anti-air capability,” the officer said.

The Navy’s force mix plan will address these deficiencies, the flag officer says, adding that the acquisition will allow the Navy to retire its legacy ships, many of which are World War II-era vessels donated by the United States at the end of the Vietnam War in 1975.

The rest of the surface combat vessels will be acquired in the third horizon until 2028, excluding electric-diesel submarines that are very expensive.

“We have not abandoned the plan to acquire two to four submarines, but it will take time to train people who will man these vessels as well as build a base suitable for these sub-surface vessels,” the flag officer said, adding that they are looking at the experiences of Southeast Asian countries that operate submarines such as Vietnam, Indonesia and Singapore.

The Navy has been constantly reviewing its force mix plan after President Duterte approved in 2018 a revised modernization plan under the second horizon.

The country planned to spend about P150 billion for a 15-year modernization plan in the mid-1990s after the US was kicked out of its two large overseas bases in the Philippines.

In the 1970s and 1980s during the presidency of Ferdinand Marcos, the country had relied heavily on the US security umbrella for its external defense, while Philippine security forces focused on internal security threats posed by Maoist-led guerrillas and Muslim separatist rebels in the south.

But the first modernization plan failed because there were not enough funds. Congress allocated only P50 billion and it was not until the presidency of Benigno Aquino III that funding for the modernization increased to P25 billion a year, up from P5 billion a year under former president Gloria Macapagal Arroyo.

During the Aquino administration, the revised three-phased, 15-year modernization program worth P300 billion was passed.

In 2018, Duterte approved a revised acquisition program, giving priority to the Navy and Philippine Air Force in the procurement of brand-new equipment. 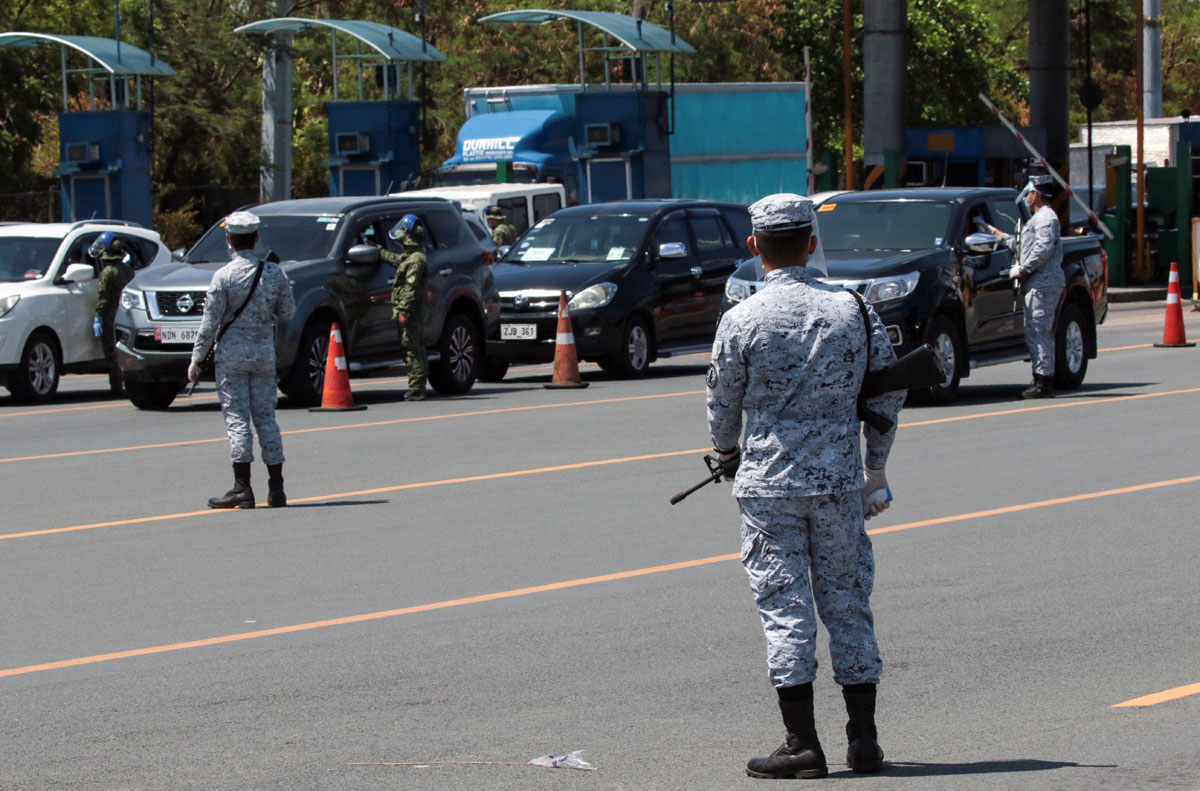 On Saturday, May 23,  the Navy’s first-ever modern warship, a missile-capable, semi-stealth frigate was delivered to Manila from a South Korean shipyard. The second frigate will be delivered in October 2020.

The contract for the construction of two light frigates was signed by the Philippines with Hyundai Heavy Industries shipyard in October 2016.

Twelve missile-capable corvettes will be acquired for anti-submarine warfare. Two corvettes worth P28 billion are planned to be procured until 2023. A South Korean shipyard, which built the frigates, will be awarded the contracts.

At least 18 offshore patrol vessels (OPVs) will be acquired for exclusive economic zone (EEZ) patrols. Six are planned initially for P30 billion and will be awarded to an Australian shipyard.  Six more are planned until 2028 to join six existing vessels – three former Hamilton-class cutters from the US donated in 2011 and three former Peacock-class corvettes from the British Royal Navy stationed in Hong Kong, bought in 1997.

Eight Fast Attack Interdiction Craft armed with short-range missiles from Israel will also be acquired, but procurement of 40 of these ships will be spread out through 2028. The Navy has allocated P10 billion for the eight missile craft.

Acquisition of 42 smaller Multi-Purpose Attack Craft from Taiwan is also planned. There are already 12 operating in the Navy; three are fitted with Israeli missiles, the first-ever missile gunboats in the Philippines.

Two more strategic sealift vessels are also planned and will be awarded to an Indonesian supplier, which already delivered two ships – the BRP Davao del Sur and BRP Tarlac. The two ships will cost P5.5 billion.

The Navy also plans to build an aviation force with 34 planes and helicopters, including vertical takeoff and landing drones, designed for surveillance and anti-submarine warfare. Shore-to-ship and shore-to-air missile batteries are also planned.

The Philippine Marines, which is part of the Navy, has a different set of weapons upgrade plan, including amphibious assault vehicles, rotary aircraft, drones, mortars and assault rifles.

In a statement on Saturday, the Navy announced that its first missile-capable warship, which will be christened BRP Jose Rizal (FF150) once it is commissioned to service, finally arrived in Subic, Zambales after its five-day maiden voyage from Ulsan, South Korea.

“We consider this a breakthrough in the Philippine Navy’s transformation journey (and) our goal of building a strong and credible maritime force,” presidential spokesman Harry Roque said in a statement on Sunday, May 24.

Upon reaching the Philippine waters early morning of May 21, the Jose Rizal exchanged signals and communications through radio with BRP Quezon (PS70), which is deployed in Mavulis Island, Batanes.

In the early morning of May 22, the Naval Forces Northern Luzon welcomed Jose Rizal  by rendering a meeting procedure with its first patrol boat division composed of three patrol boats in the vicinity of Bolinao, Pangasinan. Later in the afternoon, the BRP Andres Bonifacio (PS17) with one Augusta Westland (AW) 109 helicopter and C-90 fixed-wing aircraft conducted a meeting procedure with FF150 in the vicinity of Sta. Cruz, Zambales. It was then escorted by Andres Bonifacio to its designated anchorage area. 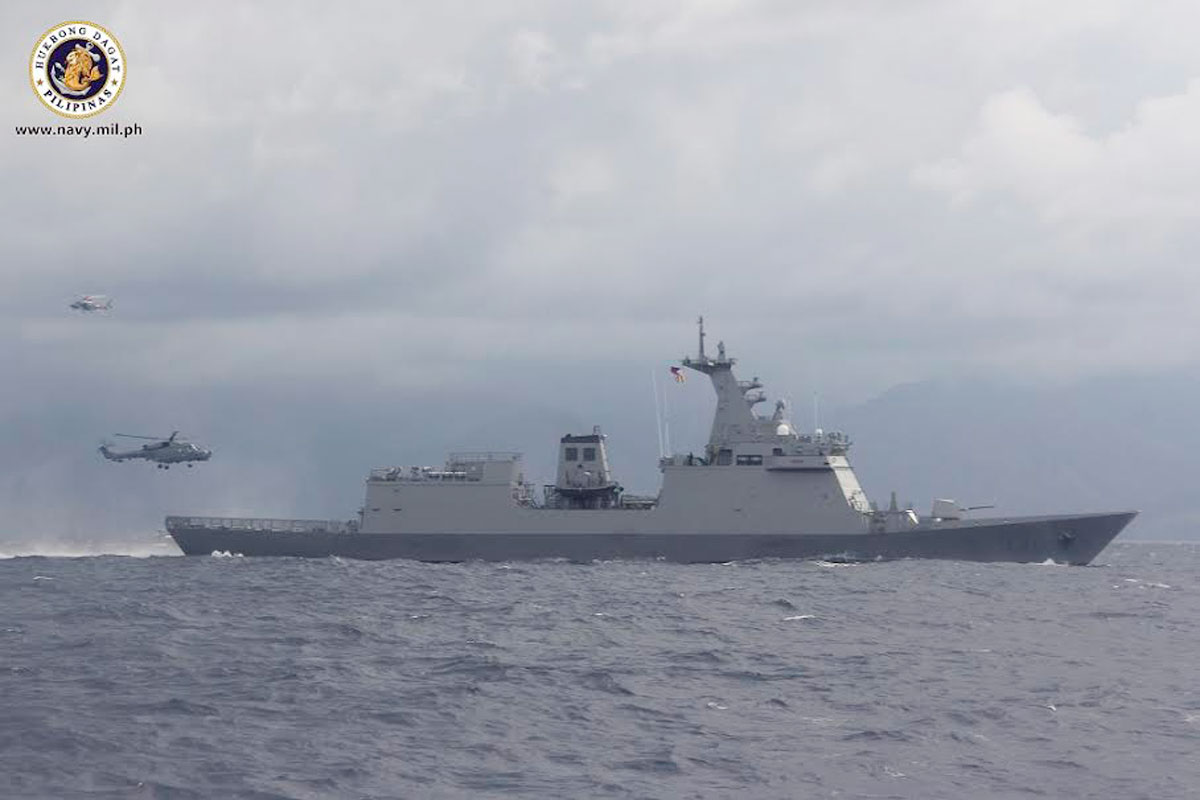 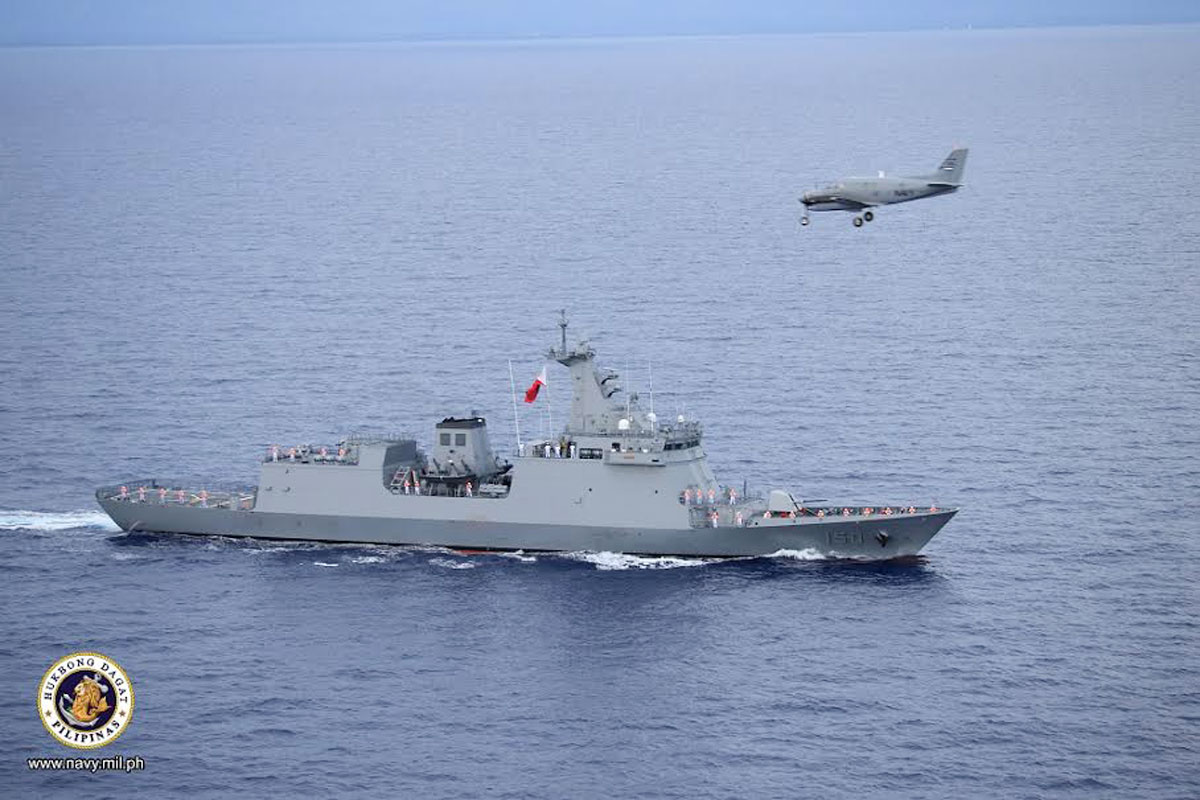 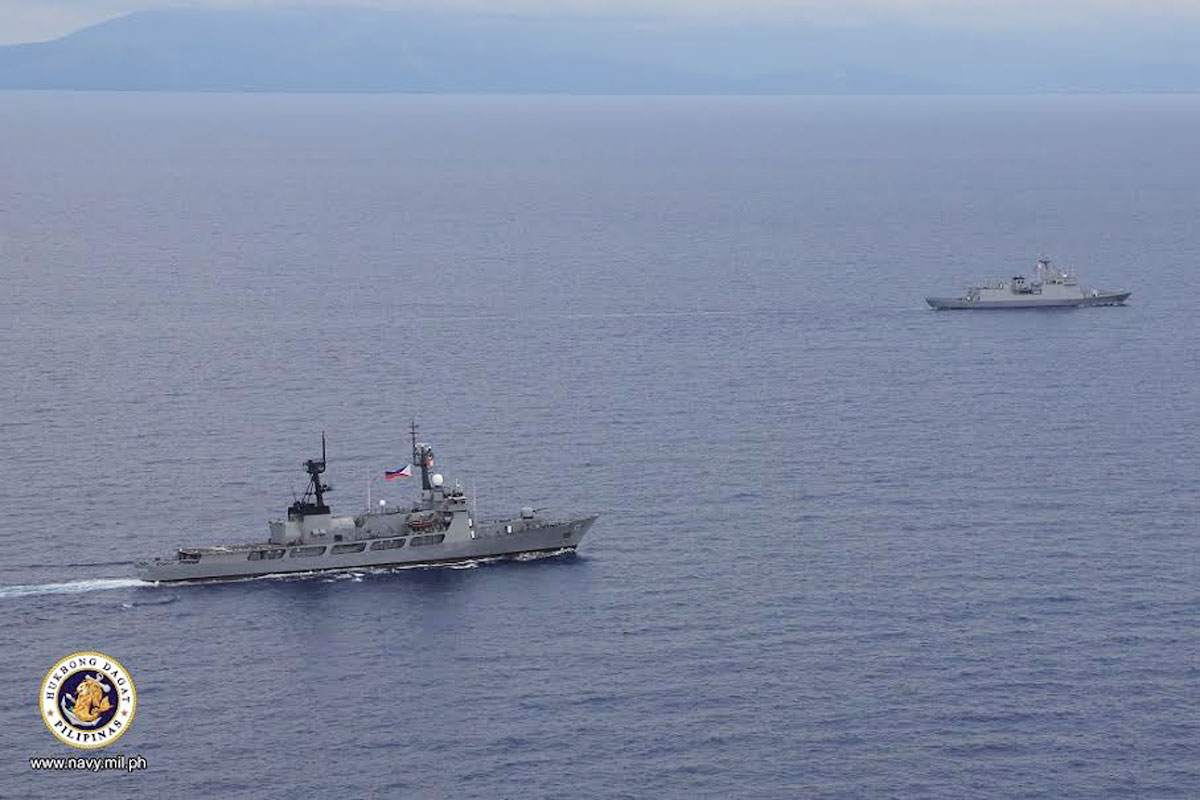 Earlier on Saturday, Jose Rizal was accorded the traditional passing honors with PS17 and three multipurpose assault craft. The event was captured during the fly-by of two naval anti-submarine helicopters AW159 and AW109.

Commodore Karl Decapia, commander of the Navy’s Offshore Combat Force, presided over the arrival of Jose Rizal. He said this signals the realization of a modern Navy that is capable of carrying out its territorial defense mandate.

According to the Navy, the frigate is capable of fighting the four dimensions of warfare. Decapia thanked the Philippine leadership for supporting the Navy modernization in pursuit of a credible and modern force.

In a separate statement, the Philippine Fleet commander, Rear Admiral Loumer Bernabe declared: “We are one with the Filipino people in expressing our profound gratitude in bringing pride and honor to the Philippine Navy and the AFP (Armed Forces of the Philippines).”

“Our countrymen expect nothing less than the selfless and honorable service that we in the Fleet have sworn to uphold and protect. I enjoin everyone to sustain the momentum that you have gained and continue to aspire for competence and excellence,” he said.

While at anchor, the sailing crew of Jose Rizal will undergo two-week quarantine, in adherence to the strict health protocols being implemented by the government to curb the spread of the coronavirus disease 2019.

The Jose Rizal frigate was launched in 2019 by HHI in Ulsan and started sea trials in South Korean waters in November last year. The commission was expected originally on April 18, but due to the pandemic, the date had to be pushed back.

The technical inspection and acceptance of the frigate will begin after the quarantine period. A simple arrival and commissioning ceremony is set on June 19, coinciding with the birth anniversary of national hero Jose Rizal, the ship’s namesake.

The Navy said the arrival of the frigate in the country is yet another major step toward the fulfillment of its thrust of having modern platforms and systems. These provide opportunities for its personnel to develop modern mindsets and propel the whole organization into becoming a multi-capable naval force responsive to maritime defense and development. – With Alexis Romero