A public administration expert finds the government’s response to the coronavirus disease 2019 pandemic wanting and that the public health crisis should finally result in bigger investments into the country’s healthcare system. 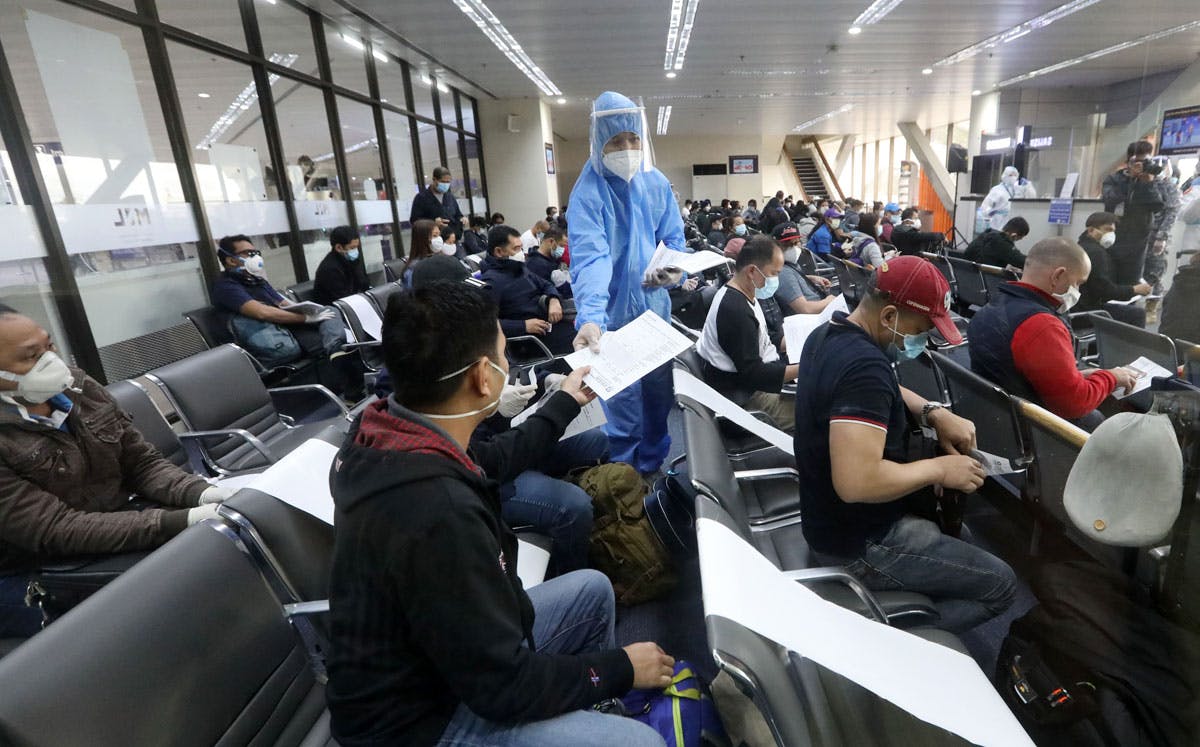 More than 200 Filipino seafarers arrive at the Ninoy International Airport Terminal 1 in Parañaque City from Hamburg, Germany on June 12, 2020. A chartered flight was arranged for the seafarers who had a hard time going back to the country due to global travel restrictions imposed to curb the spread of the coronavirus disease 2019. Photo by Edd Gumban, The Philippine STAR

The Philippine government’s response to the coronavirus disease 2019 (COVID-19) pandemic has been “reactive, ad hoc and inadequate,” exposing the deeply rooted problems in the country’s public healthcare system weakened by “deliberate policy choices, fiscal priorities and institutional design” in favor of privatization throughout the decades, according to a paper by a University of the Philippines lecturer.

Paul Quintos, senior lecturer at the UP National College of Public Administration and Governance, highlighted the need for an “inclusive, just and equitable health system that will help us look forward to a ‘new and better normal’ for all.”

In his policy paper titled “The Philippines’ COVID-19 Response: Symptoms of Deeper Malaise in the Philippine Health System,” Quintos said the Philippines’ status as a developing country should not be used as an excuse for the government’s slowness in scaling up the capacity to test, trace and treat COVID-19 patients.

The paper noted the relatively better performance of countries with similar or even lower levels of economic development, such as Vietnam.

But the inadequacy of the government’s response “should not be attributed merely” to the supposed incompetence of the current health secretary or the “poor leadership” of the Inter-Agency Task Force for the Management of Emerging Infectious Diseases (IATF-EID) either, according to the paper.

The paper sees the struggle to contain the pandemic as a consequence of a health system “weakened by decades of neglect and the systematic reorientation towards privatized health care at the expense of public health.”

“Years of neglect and diminution of public health” eventually caused the country’s healthcare system to be “dreadfully ill-prepared to respond to the COVID-19 pandemic when it hit our population at the start of 2020,” the paper said.

“The gaps and failings in the government’s COVID-19 response cannot merely be attributed to poor leadership or the lack of experience in dealing with a pandemic of this scale,” it read. “From the onset, the Philippines’ pandemic response has been fundamentally constrained by the sorry state of the public health system in the country.”

Describing the public health care system as “chronically ill,” the paper said the government’s health expenditure never exceeded 1.6 percent of gross domestic product (or the country’s total economic output) since at least the mid-1990s. In contrast, over seven percent of GDP was allocated for debt service payments from 1986 to 2003.

The government’s spending on health was only $42.40 per person in 2017, one-fifth of the average among the Association of Southeast Asian Nations member states and a mere 7.3 percent of the global average.

The government has increasingly passed on to individuals the burden of caring for their health, the paper showed. Of the total health expenditure, 85 percent is spent on personal health care, because most medical expenses continue to come out of the people’s pockets or be borne by their insurance coverage.

This means very little of the country’s total health expenditure is going to public health, like building and equipping hospital facilities, and coordinating personnel and logistics in cases of emergencies such as the current pandemic.

The shift toward insurance-backed personal health care began in the mid-1990s with the National Health Insurance Act of 1995 and bolstered by the universal health care agenda of former president Benigno Aquino III. This was translated into law with the Universal Health Care Act that President Duterte signed in 2019, the paper stated.

The local government units’ share crashed to a paltry 6.7 percent share in 2014, compared to 19.6 percent in 2000. The lack of health spending at the LGU level meant only 45 percent of all barangays have health stations as of 2019, and each one is forced to cater to the needs of an average of 4,638 persons.

The paper noted this irony: “Starved of funds but not of talent, the Philippines now has the dubious distinction of being one of the leading exporters of medical professionals to the rest of the world even as it suffers from a shortage of health care workers at home.”

Despite these funding issues, the paper noted that the Duterte administration still proposed in its 2020 National Expenditure Plan to cut the budget of the DOH by 10 percent from the 2019 level.

Congress ended up going against the administration’s priorities and increased the DOH’s budget by three percent in the General Appropriations Act. Still, the budget for the agency’s Epidemiology and Surveillance Program was not saved – it still sustained a 56-percent budget cut in the approved GAA despite its central role in pandemic preparedness. 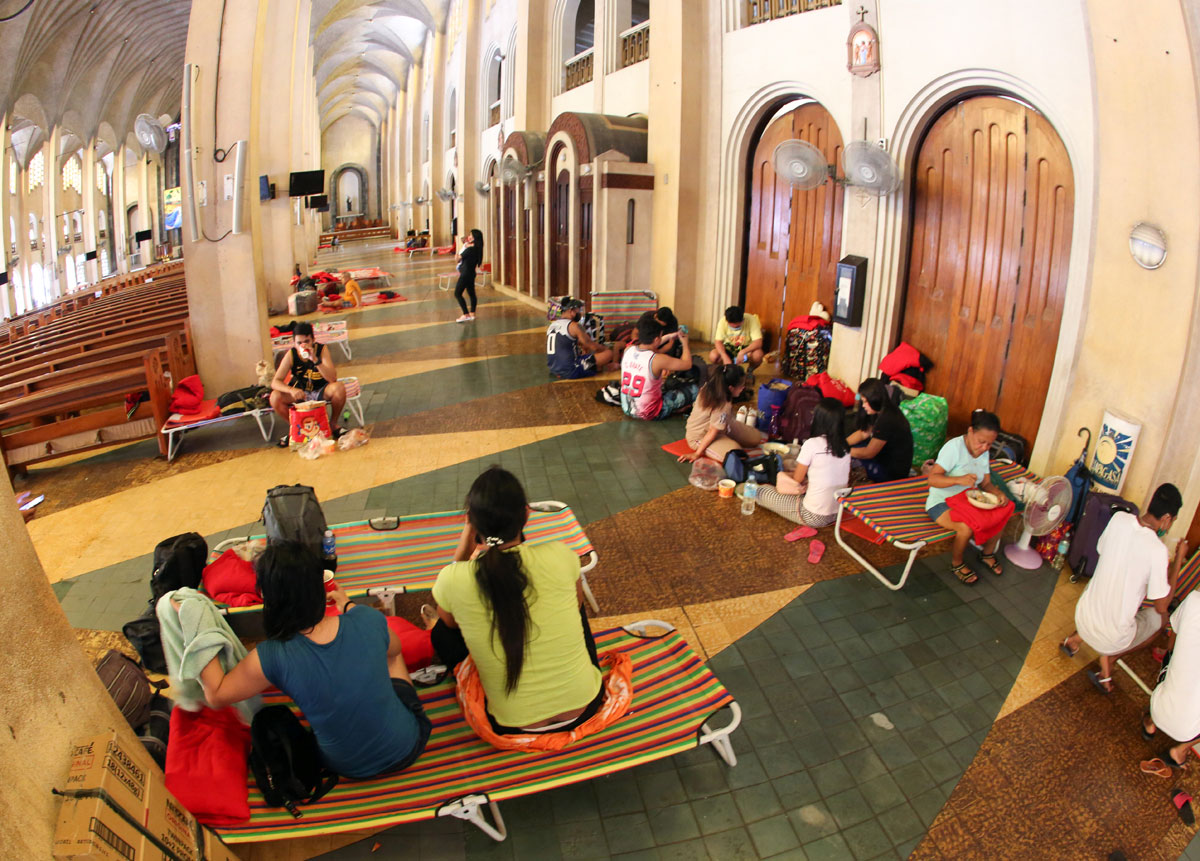 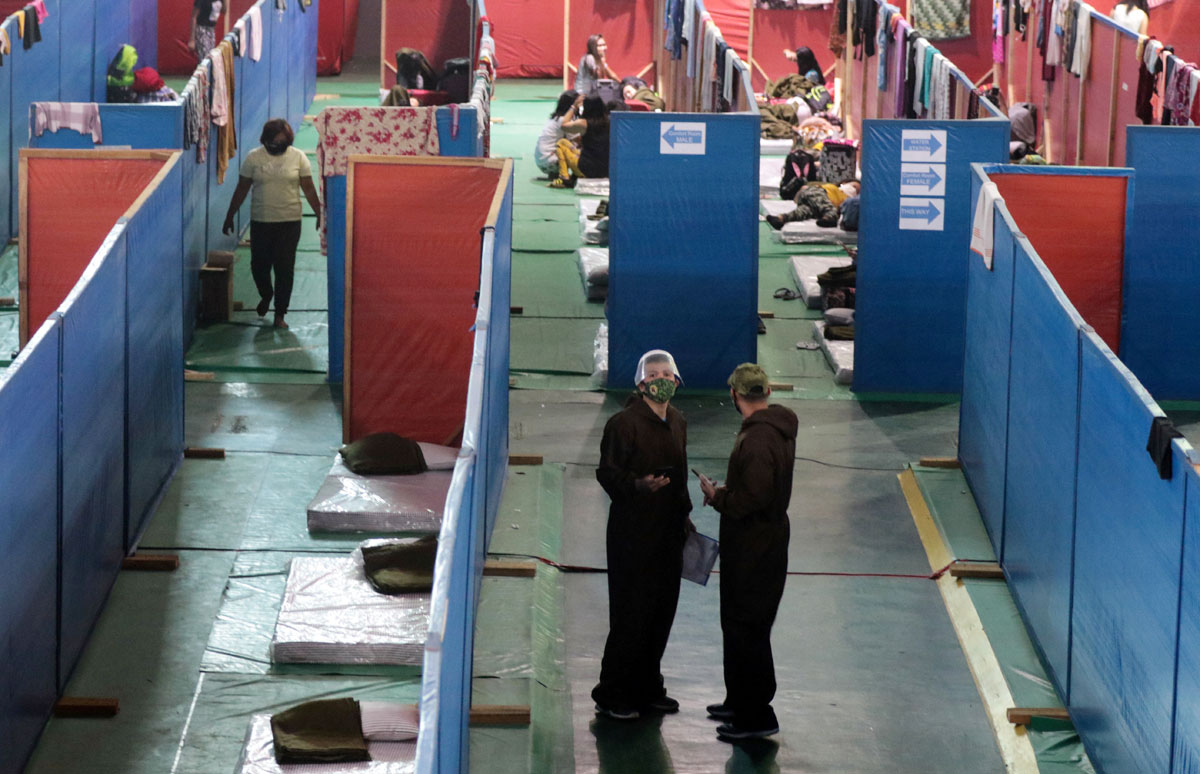 While the country suffers from inadequate health care personnel, equipment, infrastructure, training and experience to fight the pandemic, the paper noted that “the government has relied more on the state’s security apparatus to enforce social distancing and community quarantines.”

The paper noted that the Philippines adopted measures on Jan. 5, when the DOH ordered a tighter screening of incoming travelers. The agency on Jan. 22 released interim guidelines establishing surveillance systems to actively look for COVID-19 cases. The IATF-EID was first convened on Jan. 29.

However, the paper observed that despite these early efforts, the government failed to rise up to the challenge due to systemic problems that have long escaped attention.

“The government’s subsequent response revealed the inadequacies of the national disaster response framework and exposed the sorry state of the country’s health system. The attempts to contain the pandemic also shone a harsh light on long-standing deficiencies in the country’s social, economic and political institutions that have exacerbated the vulnerability of vast swathes of the population,” it said.

The administration resisted calls to ban travel from China, and only relented after the first confirmed case in the country, a woman who came from Wuhan, was reported on Jan. 30. Still, five days after the World Health Organization (WHO) declared a public health emergency of international concern, Duterte on Feb. 3 tried to downplay the threat of the virus.

After the DOH confirmed the first cases of local transmission, Duterte declared a state of public health emergency in the Philippines on March 9, but the WHO reported on the same day that the national government was still finalizing its draft contingency plan. A week later, Duterte placed the entire Luzon under enhanced community quarantine to arrest the spread of COVID-19.

The paper noted that the IATF-EID unveiled the National Action Plan only on March 24, one week into the lockdown and more than two months after the WHO issued a comprehensive package of technical guidance online. 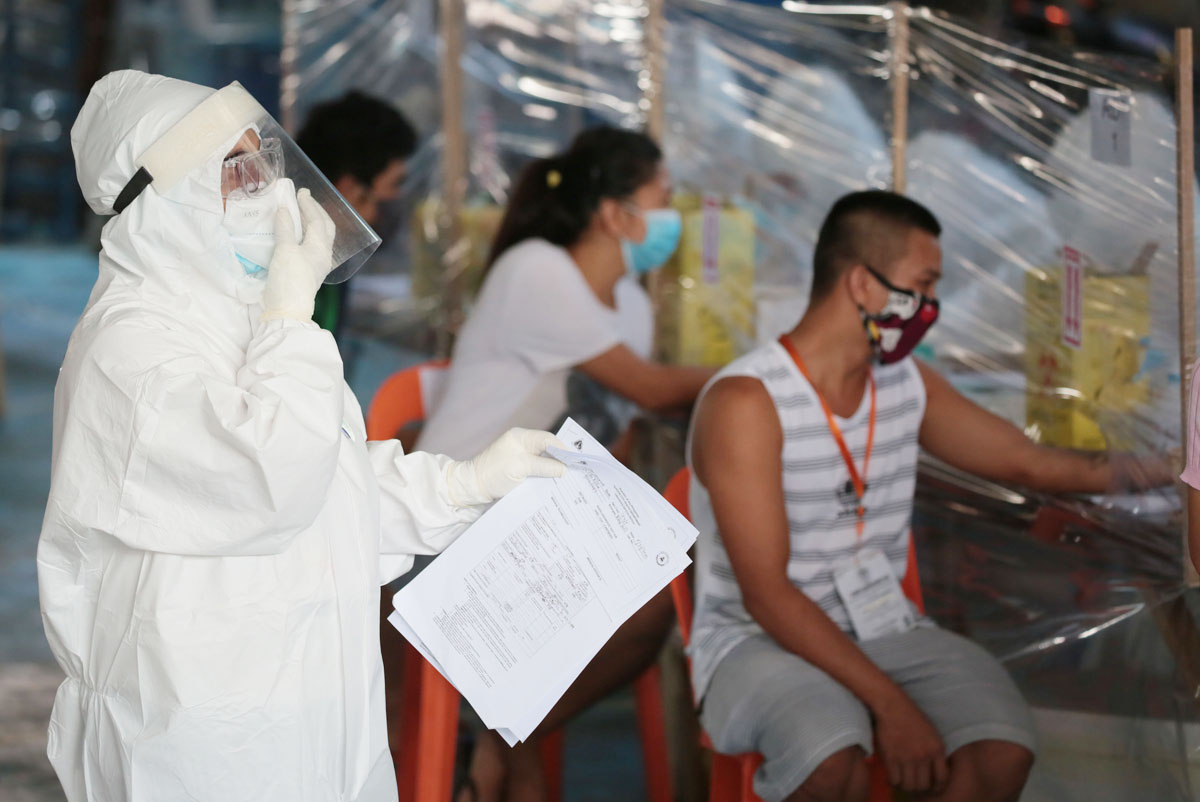 Actual case numbers may be higher

While experts, including the UP COVID-19 Pandemic Response Team, credited the quarantine measures for slowing down the rate of infections to around six days doubling time by April 10, the paper noted the concern that the actual number of cases may be significantly higher and more spread out.

These cases may have gone undetected because of the country’s low testing capacity. The paper noted that as of May 10, the Philippines was testing only 1.44 persons for every 1,000 people, compared to 31.82 for Singapore, 12.98 for South Korea, 7.94 for Malaysia and 4.1 for Thailand.

The DOH insisted that mass testing was not needed even as late as March 20. The government adopted a policy to test high-risk persons only on April 14. The country had only 34 accredited testing laboratories as of May 25 (three-fourths of which were in Metro Manila), compared to Vietnam’s 112 by the month of April.

Even when more laboratories were accredited, the paper noted that only a little over 8,000 people were being tested daily. The backlogs in data processing by as many as 6,000 cases as of May 25 also worsened the situation.

The lack of testing could likely contribute to the Philippines’ relatively high fatality rate (considering its younger population), as asymptomatic, mild or less risky cases were not being counted. The paper noted that Filipinos tend to be discouraged from seeking timely medical care because of high out-of-pocket costs, even if the Philippine Health Insurance Corp. foots a portion of the bill.

The paper also flagged the severely limited contact tracing capacity. There were only around 38,315 contact tracers as of May 21, or 35 for every 100,000 people – far below the WHO’s recommended ratio of one tracer for every 800 people.

Duterte’s report to Congress also stated that 63,306 close contacts of COVID-19 patients were traced – too small compared to the number of tracers, which indicates that “possibly just the household members” were being traced, the paper noted. This would hinder the ability to contain the spread of the virus.

Despite the economic hardships caused by the lockdown, the paper observed that the government failed to make the most out of it in terms of slowing down the spread of the virus.

“The lockdown period should be used to raise the capacity of the healthcare system to test, trace and treat COVID-19 patients as well as attend to the non-COVID related health needs of the population,” the paper noted.

“On this point, the government’s response appears inadequate because while the lockdown and social distancing measures may have slowed down the spread of new cases, the country’s health system is bursting at the seams,” it said.

A new and better normal

Going forward, the paper said the “fundamental ills of the Philippine health system” caused by the government’s lopsided priorities should be remedied for a “new and better normal.”

It said public spending on health should be increased to at least five percent of GDP, instead of the current meager range of 1.6 percent.

The paper also called for the expansion and strengthening of primary health care at the barangay level, including community education, promotion of food security, supply of safe water and basic sanitation, maternal and child health, immunization, prevention and control of locally endemic diseases, scientifically and culturally appropriate treatment of common diseases and injuries, and provision of essential drugs.

It added that the health workforce should be expanded by the Department of Budget and Management and their salaries and benefits should be upgraded to encourage more health care professionals to stay in the country instead of seeking greener pastures abroad. Finally, the paper sought a “whole-of-society approach to comprehensively address the social, economic and environmental determinants of health.”

The paper noted: “Most people enjoy it unknowingly when there is a low incidence of disease and epidemics do not occur. But people realize its absence or inadequacy, often belatedly, when morbidity and mortality surge. For this reason, even though public healthcare is primarily the responsibility of government, self-interested vote-maximizing politicians also tend to underrate their importance.”