DOTr: No Vax, No Ride In Metro Manila

Various sectors criticized the no vaccination, no ride policy, but the Department of Transportation justified it by saying it would be more “anti-poor and anti-life” if people will get infected with COVID because they are not vaccinated. 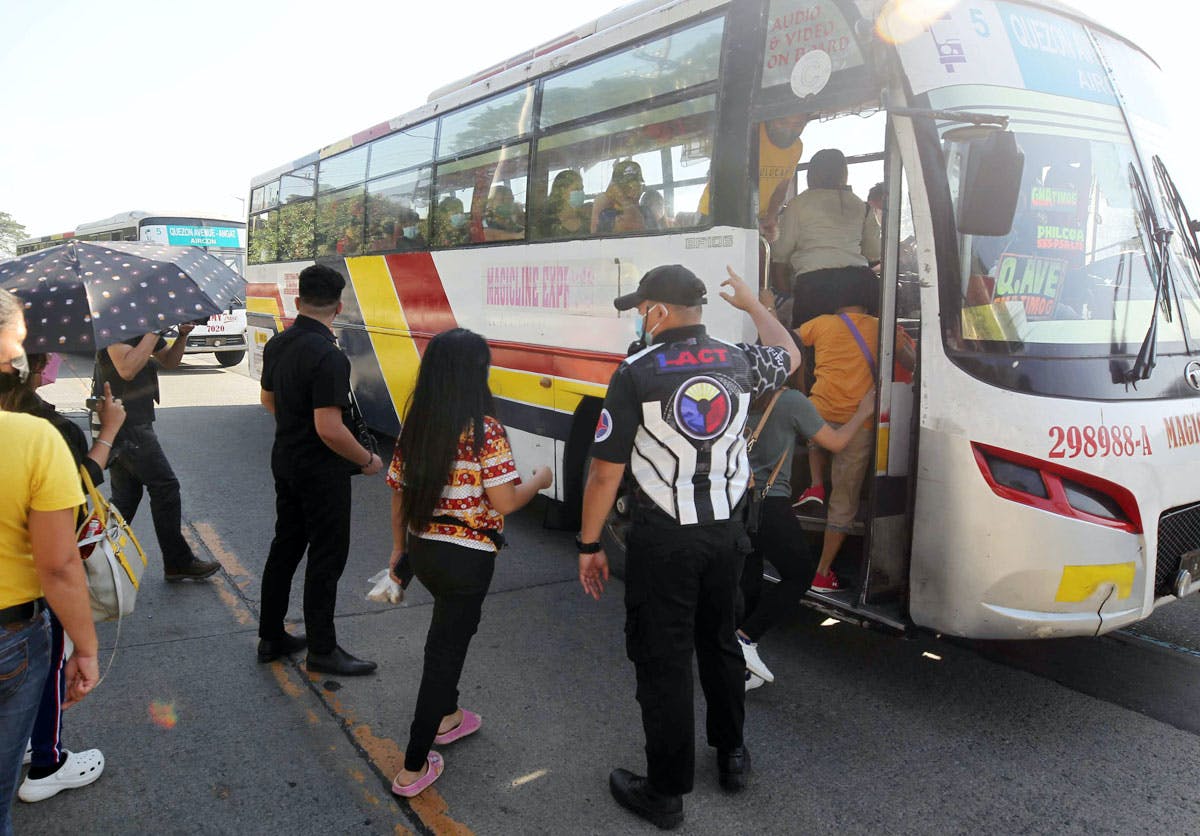 Enforcers of the Inter-Agency Council for Traffic check if the passengers of a public utility bus along Commonwealth Avenue in Quezon City are observing health protocols on Wednesday, Jan. 12, 2022, amid the rise in COVID-19 cases. Photo by Russell Palma, The Philippine STAR

Starting next week, unvaccinated persons are no longer allowed in any public transport in Metro Manila as the Department of Transportation (DOTr) ordered a “no vaccination, no ride” policy.

Transportation Secretary Arthur Tugade signed last Tuesday, Jan. 11, Department Order (DO) No. 2022-001, which limits public transportation access to the vaccinated population while Alert Level 3 or higher is in effect in Metro Manila.

The order, which is in line with President Duterte’s directive to restrict the movement of unvaccinated people in the National Capital Region, applies to all domestic travel to, from and within the NCR via public transportation by land, rail, sea and air.

It also covers public transportation for people who reside outside the NCR but work or travel to the region.

“All concerned attached agencies and sectoral offices of DOTr are directed to ensure that operators of public transportation shall allow access or issue tickets only to fully vaccinated persons as evidenced by physical or digital copies of an (local government unit)-issued vaccine card, or any (Inter-Agency Task Force for the Management of Emerging Infectious Diseases)-prescribed document, with a valid government issued ID with picture and address,” the order stated.

“To give people a little allowance to prepare for this, the order of Secretary Tugade is to make this fully effective by Monday,” Tuazon said.

Persons with medical conditions that prevent their full COVID-19 vaccination as shown by a duly-signed medical certificate with the name and contact details of their doctor are exempted from the “no vaccination, no ride” policy.

Also exempted are those who will buy essential goods and services, such as food, water, medicine, medical devices, public utilities, energy, work and medical and dental necessities, as shown by a duly issued barangay health pass or other proof to justify travel.

The DOTr said any violation would be penalized in accordance with the respective charters, authority, rules and regulations of the concerned attached agencies and sectoral offices.

As for unvaccinated passengers who will be caught, there would be no penalties, according to Tuazon.

“The only effect is they will be inconvenienced. If they are caught, they will be asked to go down (from the vehicle) wherever they are. That is why for those who don’t have vaccination cards, I would really suggest to not go out,” he said.

“We all know that the number of our enforcers is not enough to monitor each and every public transportation vehicle. That is why Secretary Tugade is asking the help of commuters to re-port violations to us,” Tuazon said.

“Half the population will not be allowed to move now? How about people who are going to their vaccination sites? They are expected to walk?” Bayan secretary general Renato Reyes said, noting that limited vaccine supplies and high vaccine hesitancy due to poor information campaigns and dismal incentives are to blame for those left unvaccinated.

The Commission on Human Rights (CHR) also expressed concern over the government’s policy that will prohibited unvaccinated persons from riding public transportation.

While some rights may be restricted in the interest of public service, CHR spokesperson Jacqueline de Guia said policies imposing such restrictions must observe human right standards and related laws.

She said the CHR previously recognized the government’s policy restricting those unvaccinated against COVID-19 from going outdoors since there was an assurance that it will not result in the denial of public services.

However, given the new order from the DOTr, “CHR fears that, while there is no direct prohibition on the right to travel with the ‘no vaccine, no ride’ policy in public transport for the unvaccinated, this policy effectively restricts the exercise and enjoyment of fundamental rights,” she said.

“The reality is that ordinary Filipinos continue to rely on public transportation in attaining basic needs, such as for food, work, and accessing health services. With the DOTr‘s ‘no vaccine, no ride’ policy, even those exempted under this policy may be restricted in accessing essential goods and services for having no or limited access to private vehicles,” she added.

The CHR urged the government to address vaccine hesitancy and the low vaccination rate in the country with education that addresses common misconceptions and positive encouragement.

“Key to upholding the right to health is informed choice and the government has the obligation to continue to promote and communicate the benefits of vaccination, especially to vulnerable sectors, and not resort to fear or force just to achieve population protection against COVID-19,” de Guia added.

For its part, the DOTr said the implementation of the policy is not unconstitutional or anti-poor. “In our bill of rights, what is protected is our right to travel. We are not limiting the travel of the commuters. What we are merely limiting is the use of public transport. They can still travel through their own means, but only not through public transport,” Tuazon said. “In our laws, individual rights are subservient to the general welfare of the many. We are still in a state of national public health emergency up to now and the DOTr has the mandate to implement a safe public transportation,” he added.
The DOTr explained it would be more “anti-poor and anti-life” if people will get infected with COVID because they are not vaccinated. The agency said severe COVID-19 infections caused by non-vaccination result in undue burden on the health care system. “The effectivity of this DO is for NCR only. It would be piloted in NCR where the vaccination rate is already very high. There are only a few who are unvaccinated. Like what Secretary Tugade and the President said, we need to encourage them to be vaccinated,” Tuazon said.
Senators cry foul

Senators hit the move of various agencies to restrict the mobility of unvaccinated Filipinos, saying the government must ensure first that there is enough supply of vaccines accessible to all.

Presidential aspirant Sen. Manny Pacquiao appealed to national government agencies and LGUs on Wednesday not to curtail the mobility of unvaccinated Filipinos so long as they observe the mandatory health and safety protocols.

“I call the DILG (Department of the Interior on Local Government), the (Philippine National Police), the Department of Transportation and all LGUs not to treat unvaccinated Filipinos as if they are criminals. Let’s not curtail their rights to make a living or buy what they need,” Pacquiao said in Filipino.

He said having a vaccine should continue to be a personal choice and the government should not impose restrictions against those who believe that this is contrary to their personal and religious beliefs.

Sen. Panfilo Lacson, another presidential aspirant in the May polls, also opposed the DOTr directive against the unvaccinated, saying the government must first ensure the availability of vaccines throughout the country.

“First, it begs the question: ‘Are there enough vaccine doses available even for the willing? If not, it’s unfair,” Lacson said. He said it is a different matter altogether if vaccines are available to all. – With Janvic Mateo, Elizabeth Marcelo, Paolo Romero, Cecille Suerte Felipe