The military believes the designation of the Communist Party of the Philippines-New People’s Army as terrorist group has a huge impact on the rebels’ continuing operations. 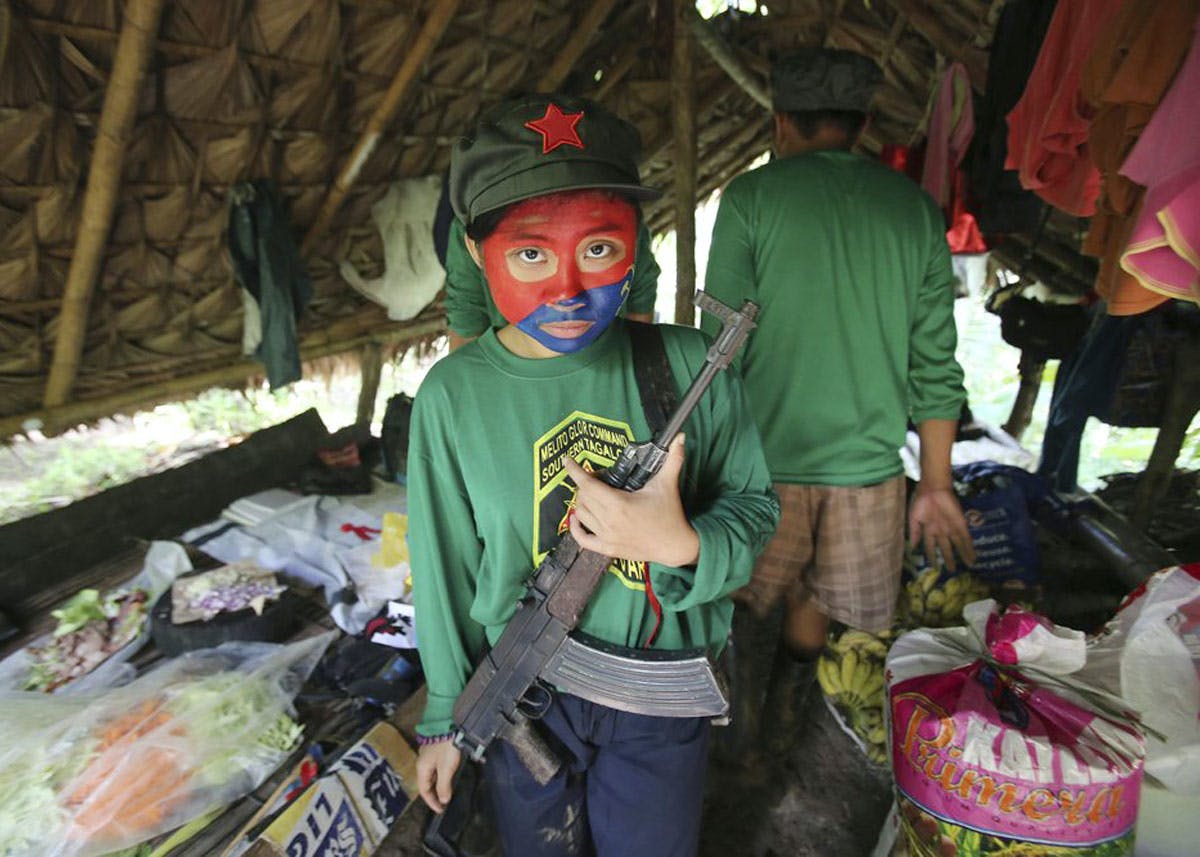 In this Nov. 23, 2016 Associated Press file photo, a woman New People's Army guerrilla with her face painted to conceal her identity holds her firearm inside a shelter at a rebel encampment tucked in the harsh wilderness of the Sierra Madre mountains.

Justice Secretary Menardo Guevarra bared on Sunday, Dec. 27, that the Anti-Money Laundering Council (AMLC) already moved to freeze the bank deposits and other assets of the Communist Party of the Philippines and its armed wing New People’s Army last Dec. 23 following its designation as a terrorist group by the Anti-Terrorism Council (ATC).

Citing information from AMLC executive director Mel Georgie Racela, Guevarra said the AMLC’s “freeze order” also covered other groups designated as terrorists by the ATC. Guevarra did not elaborate. He said the AMLC “can move in the premises at any time after due designation by the ATC.”

Aside from the CPP-NPA, the ATC also designated as terrorists the Islamic State East Asia, Maute Group and those described as “other Daesh-affiliated groups in the Philippines.”

Based on Resolution No. 12 dated Dec. 9, the ATC said it found probable cause that the CPP-NPA has committed or conspired to commit terrorist acts as prescribed by Republic Act (RA) No. 11479 or the Anti-Terrorism Act (ATA) of 2020. The ATC is the main implementing body of RA 11479, passed earlier this year.

Under the law, the ATC may designate an individual, groups of persons, organization or association, be it domestic or foreign, as a terror group when the council finds probable cause that the group is commiting, attempting to or conspiring to engage in terrorist acts.

Groups tagged by the government as fronts of the CPP-NPA have expressed concern that they could also be classified as terrorist organizations by the NTC under RA 11479.

The ATC said in its resolution that the CPP and NPA were organized for the purpose of engaging in terrorism in its over five-decade long communist insurgency.

“For almost half a century, (they) have been and still are using acts of terror to sow and create a condition of widespread and extraordinary fear and panic among the populace in order to overthrow the duly constituted authorities and seize control of the Philippine government through armed struggle,” the resolution read.

In 2018, the government through the Department of Justice (DOJ) had asked a Manila court to declare the CPP-NPA as a terrorist and outlawed organization.

The DOJ cited at least 12 incidents of what it said constituted terrorist acts, which included murder, kidnapping and arson.

President Duterte already declared the CPP-NPA a “designated/identified terrorist organization” through Proclamation No. 374 on Dec. 5, 2017, on the basis of another law, the Terrorism Financing Prevention and Suppression Act of 2012 or RA 10168.

Under Section 25 of the ATA, “designation” of individuals or groups by the nine-member council consisting of executive branch officials subjects their assets to freezing by the AMLC.

Section 36 of the law empowers the AMLC to “freeze without delay” property or funds which are “in any way related to financing of terrorism” or belonging to any person against whom “there is probable cause to believe” is committing or attempting or conspiring to commit terrorist acts.

The freeze may be done without a court order for a period of 20 days. The AMLC may ask the Court of Appeals to extend its order for another six months.

Duterte has likened the NPA to terrorist group Abu Sayyaf, saying the communist armed wing no longer has an ideology and just engages in "banditry."

In a public address that coincided with the anniversary of the Communist Party of the Philippines on Saturday, Dec. 26, Duterte said the NPA is "destroying the nation" and collects money through the "blood and tears" of other Filipinos.

"It's plain banditry. There is no more ideological setup in their (NPA) minds. They just extort money from people. You are not fighting anything anymore, not even a religion, if you may, there is none," Duterte said during a meeting with the government's pandemic task force and medical experts at Malacañang.

"Pareho talaga kayo ng Abu Sayyaf. No different. Ako pa sa inyo mag-merge na lang (You are like the Abu Sayyaf. If I were you, I would just merge with them)," he added. 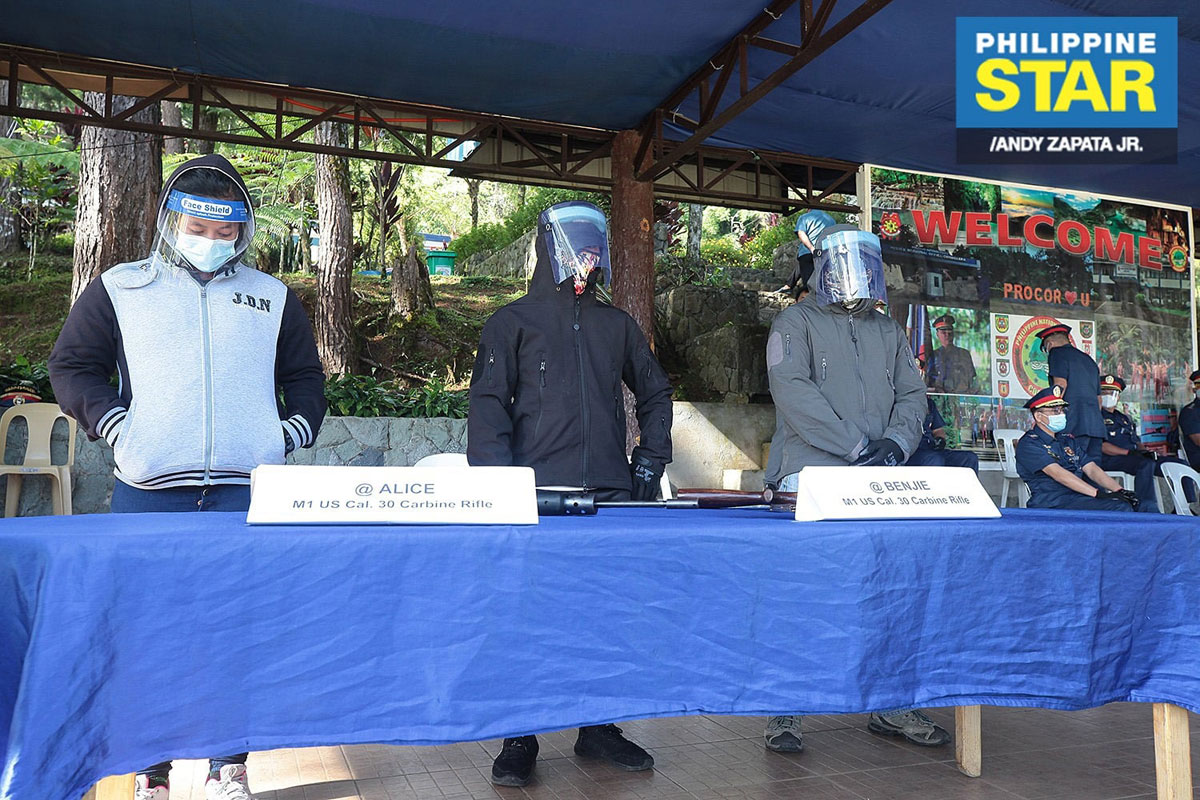 Duterte then asked Food and Drug Administration director general Eric Domingo whether NPA members would be allowed to access the vaccines for coronavirus diease 2019. Domingo said the rebels cannot be turned away if they go to local health centers to avail of the vaccine.

Duterte joked that the rebels should be given water instead of vaccine. The President then clarified that the vaccine is available to every Filipino citizen, including the NPA members so that they could "fight better" and be healthy because he knows that they would die.

Duterte also asked NPA fighters to kidnap officials of the National Democratic Front (NDF), the panel that represented the communists in the talks with the government.

"If I were you, I would hostage the NDF and demand ransom. Tell them you incurred losses so they should give you money. I will support you. Kidnap them. I will not lift a finger to help those idiots," the President said.

Duterte also renewed his call for the rebels to surrender and to live peaceful lives. He assured them that they would be given livelihood and houses if they abandon the armed struggle.  The President also advised Abu Sayyaf bandits to "report" to the military if they want to avail of COVID-19 vaccine.

With the new law, Armed Forces of the Philippines spokesperson Maj. Gen. Edgard Arevalo said the AMLC can now look into the bank deposits of people he described as “sinasabing miyembro ng grupo (said to be members of the group),” referring to the CPP-NPA.

Arevalo said in a radio interview that the designation of the CPP-NPA as a terrorist organization was a big boost to their fight against communist insurgency. “Malaking bagay ito.”

He claimed that the CPP-NPA had been somehow depositing funds in the bank. “Iniimpok nila sa bangko at kinukuha po nila ‘yan, ginagamit upang labanan ang ating pamahalaan, pinambibili ng armas (They deposit it in the bank and withdraw it, using it to fight the government, buy arms),” he said.

‘Outside the legal jurisdiction’

But the CPP, which marked the 52nd anniversary of its so-called “armed struggle” on Dec. 26, rejected not just its designation by the ATC but the “juridical authority” of the Philippine government itself. The party and its armed wing, the NPA, are “outside the legal jurisdiction” of the Philippine government, its information officer Marco Valbuena said in a Dec. 27 statement.

“Neither does the CPP recognize the Anti-Terror Law as a legitimate law,” Valbuena said.

This meant the CPP-NPA will not file a request for “delisting” before the ATC, as provided under Rule 6 of the implementing rules and regulations of the Anti-Terrorism Act.

Instead, Valbuena said legal experts “can take independent action to question the ATC’s designation” in order to “prevent the legal consequence of the CPP designation by the ATC against the people’s civil and political rights.”

He insisted that the Duterte administration was only using the law as a pretext to crack down on those “who oppose Duterte’s tyrannical rule and who stand against his plans to perpetuate his rule.”

“It is merely using the veil of ‘anti-terrorism’ to suppress and clamp down on patriotic and democratic forces and delegitimize their mass-oriented cause,” Valbuena said.

He compared the ATC to the National Task Force to End Local Communist Armed Conflict (NTF-ELCAC), which had been criticized for supposedly red-tagging critics of the Duterte administration without evidence and for dubious reasons such as denouncing the closure of ABS-CBN Corporation’s free-to-air broadcast operations. 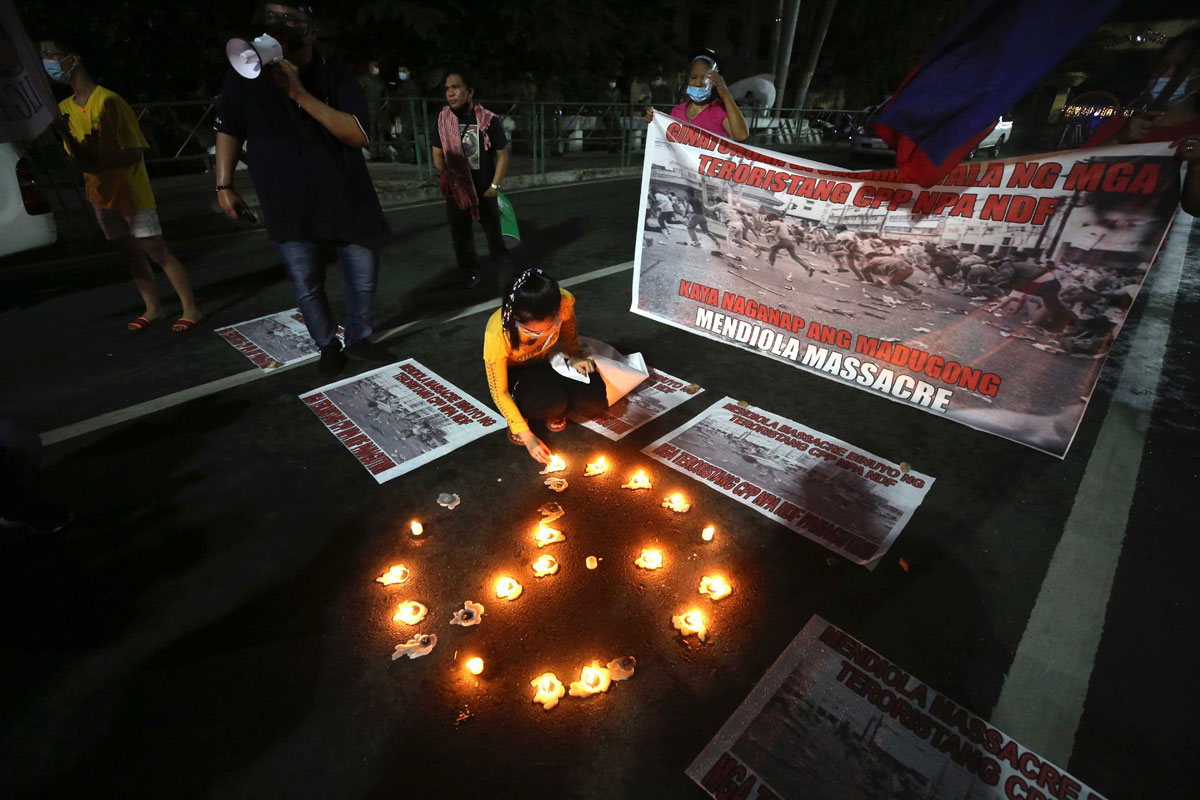 He noted that the CPP-NPA was not listed in the websites of the UK Home Office or the Australian National Security websites. The former listed the Abu Sayyaf Group (ASG) and the Jemaah Islamiyah, while the latter mentioned the ASG and the Islamic State East Asia.

He also argued that Section 25 of the ATA allows the ATC to adopt “request for designations by other jurisdictions,” but the resolution did not cite any requests being made by the mentioned foreign governments.

Valbuena  argued that the CPP-NPA’s stated aim of overthrowing and seizing control of the Philippine government would have to be classified as rebellion, not terrorism – contrary to Duterte’s claim that it was now engaged in “pure banditry” without ideological grounds.

“The CPP and the NPA are revolutionary organizations that are fighting for the national and democratic interests of the Filipino people. The CPP and the NPA stand against terrorism which involves inflicting violence on unarmed civilians in violation of international humanitarian law,” he said.

He insisted that the armed group even “formally recognizes and applies” the Geneva Conventions that seek to protect those not participating in armed hostilities.

CPP founding chairman Jose Maria Sison, for his part, claimed it was the Philippine government that was committing “state terrorism and fascist dictatorship under the so-called Anti-Terrorism Act.”

“The CPP, NPA and the NDFP (National Democratic Front of the Philippines) are not terrorists because they adhere to the international law on human rights and humanitarian conduct in the civil war and the Comprehensive Agreement on Respect for Human Rights and International Humanitarian Law,” Sison said.

It was Duterte who announced the scrapping of the peace talks on Feb. 4, 2017, citing demands that “are just too huge that it is impossible to meet or even work out a compromise.” This was made formal on Nov. 23, 2017, with the issuance of Proclamation No. 360.

Aside from Islamic State East Asia and the Maute Group, the other identified groups in the ATC’s Resolution No. 13 were:

The ATC did not include the ASG in the list, but the group was judicially declared a terrorist organization by Isabela City Regional Trial Court Branch 2 Judge Danilo Bucoy in September 2015 under the Human Security Act of 2007.

DOJ Undersecretary Adrian Sugay did not respond to request to explain the “other Daesh-affiliated groups in the Philippines.”