The Senate pushes a last-minute provision specifying acts punishable during the COVID-19 ‘national emergency,’ but tempers the turnover of the sweeping budgetary powers to the President. 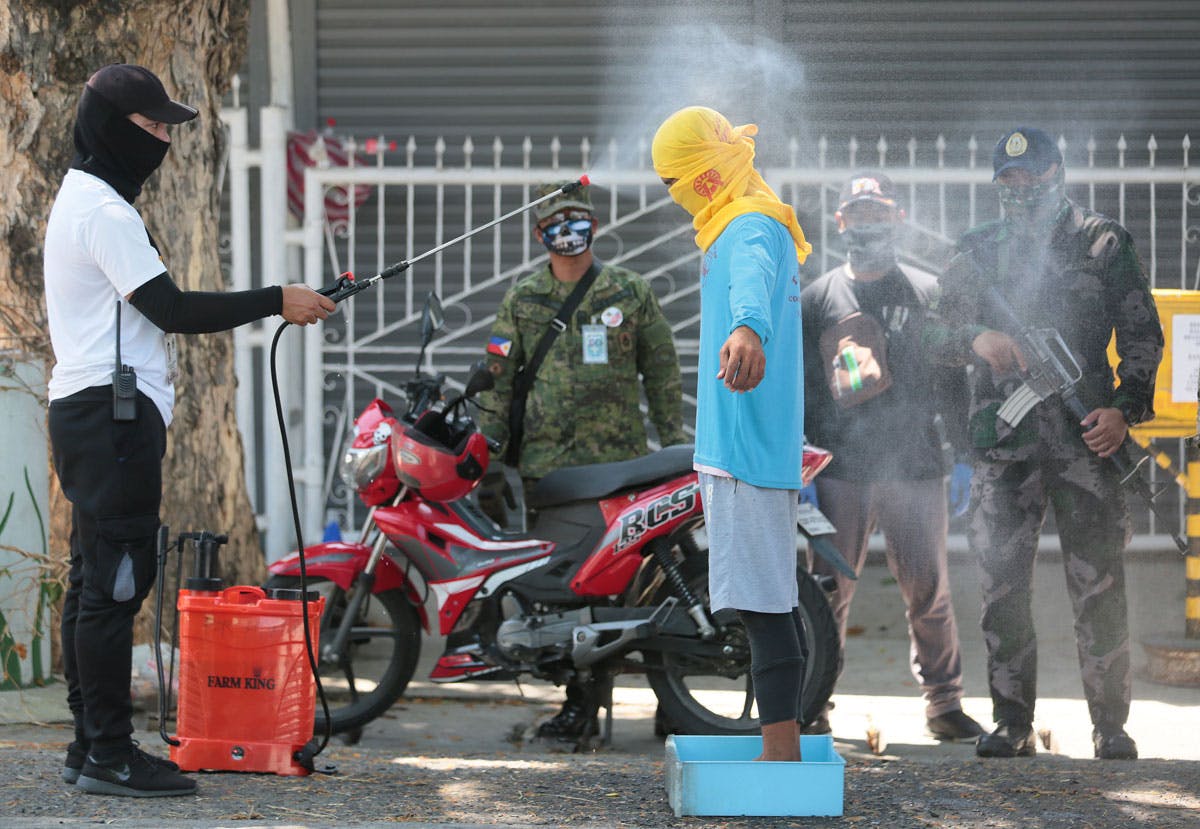 On March 24, 2020, a motorist crossing the border of Rosales and Balungao in Pangasinan gets disinfected as the province is placed under extreme enhanced community quarantine due to cases of coronavirus disease 2019. Photo by Michael Varcas, The Philippine STAR

Congress, during the wee hours of Tuesday, March 24, specified what acts may be punishable under the measure granting President Duterte standby powers to address the coronavirus disease 2019 (COVID-19) pandemic — among them, the spreading of false information that has “no valid or beneficial effect” to the public, and the disobedience of local government officials to the quarantine directives of the national government.

But the Senate managed to temper the turnover of sweeping budgetary powers to Duterte, through its version of the proposed Bayanihan to Heal as One Act that the House of Representatives begrudgingly adopted.

Questions continued to abound about the proposed law’s perceived excessiveness and necessity, as well as the seeming consolidation of Congress’ powers in Duterte’s hands. Lawmakers called them emergency powers, but Malacañang said the President only wants “special,” “standby” or additional powers.

Apart from granting unbridled discretion to Duterte, earlier versions of the measure vaguely sought to punish “violations of the provisions of this Act.”

The penalty for these acts is imprisonment of two months or a fine of P10,000 to P1 million under the proposed law. The courts would be given the discretion to impose both imprisonment and a fine.

On top of these penalties, public officials or employees who commit these violations would suffer perpetual or temporary absolute disqualification from public office. If the violator is a corporation or any other juridical entity, the president or manager would be held liable if they participated or knew of the offense. Aliens, meanwhile, would be “deported without further proceedings.” 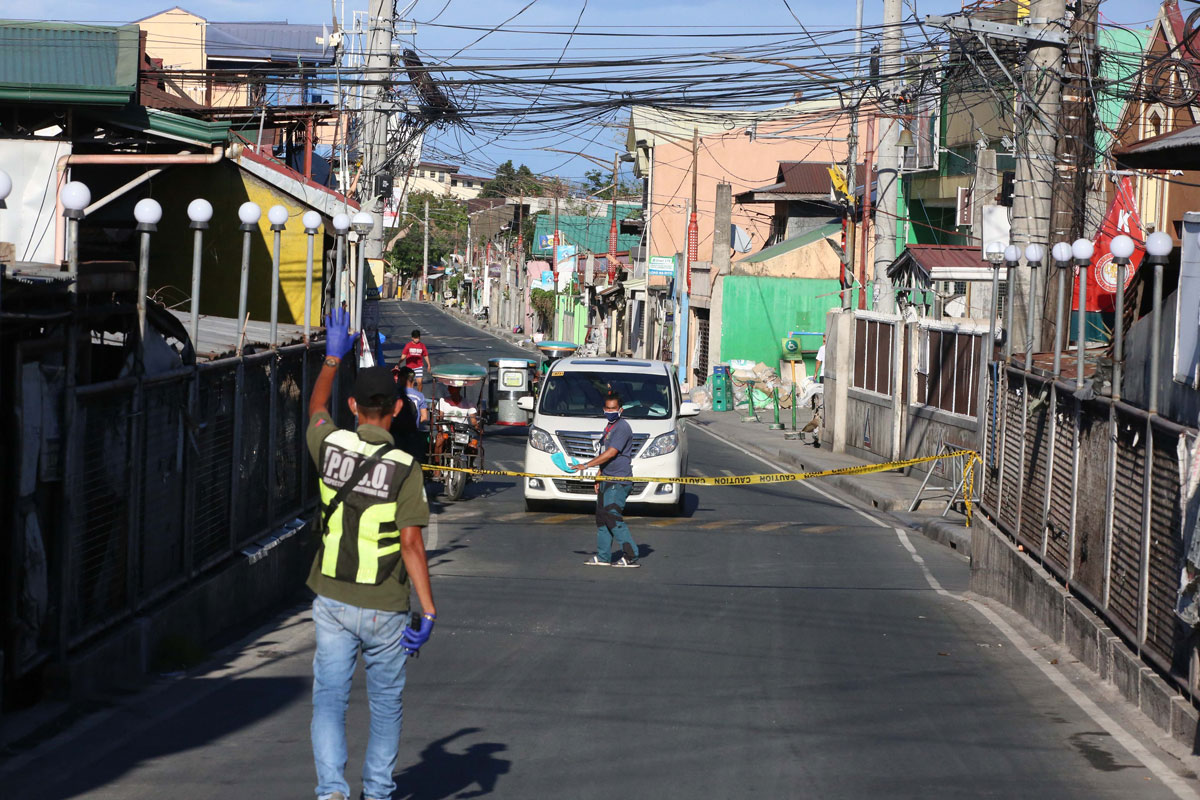 He noted that lack of definition of the terms mentioned above, especially the terms “valid or beneficial” speech.

“This gives too much discretion on the part of the implementing law enforcer, so there is a real danger that speech that enjoys constitutional protection is lumped along with speech that spreads false information. So it will have a chilling effect on free speech,” Bagares said.

He also raised the possibility that the law could be used to prosecute writers who make mistakes in their news reports, even as the Supreme Court, in its Feb. 18, 2014 decision in Disini versus Secretary of Justice already explained that such errors were not automatically actionable unless they were malicious.

“It almost seems like a knee-jerk reaction of legislators on intense criticisms they received for comparing themselves to frontliners who are actually dying or who expose themselves daily to the dangers of the COVID-19 disease in the hospitals,” Bagares said.

National Union of People’s Lawyers president Edre Olalia said penalizing the dissemination of false information would be “constitutionally challengeable as undermining or curtailing freedom of speech, expression and for media.”

National Union of Journalists of the Philippines chairman Nonoy Espina said: “Any legislation that intends to stifle and/or penalize free, if abusive, speech is always open to abuse and can be turned around to stifle the exercise of free expression, especially criticism and dissent.”

“This administration's record of truth-telling is already a red flag,” Espina told The Philippine STAR.

During the special session on Monday, Speaker Alan Peter Cayetano – brother of the sponsor of the Senate bill – dismissed as “fake news” concerns regarding the shortage of personal protective equipment (PPE) for frontliners in certain areas.

This was despite Department of Health Assistant Secretary Maria Rosario Vergeire herself acknowledging that there was a “global shortage,” and numerous leading hospitals appealing for donations. Dr. Gia Sison of Makati Medical Center even posted: “Palimos ng PPE (Begging for PPE). The shortage is real and was never fake news!”

Espina noted the irony of Cayetano agreeing to adopt the Senate version containing such provisions against false information.

“I am sure Mr. Cayetano, who has proven several times to be sensitive to criticism, was not thinking of the administration and its stable of ‘influencers’ who have a long record of spreading false information, including about COVID-19 when it involves groups and personalities the administration sees as its foes,” he said.

Bagares also stressed even the penal provision on the disobedience by LGU officials may be “exploited to eliminate political rivals.”

This provision would also be too broad, as neither “disobedience” nor the phrase “national government policies or directives in imposing quarantines” were defined. Bagares questioned if even the press statements of Duterte or the Inter-Agency Task Force required obedience.

“A hallmark of due process is the right to be informed of the charge against you. The law does not specify which law is referred to as applicable, and which violation is subject of the penalties imposed by this enactment,” Bagares said.

More importantly, he pointed out that this would stifle the freedom and the constitutionally guaranteed autonomy of LGUs to act within the confines of their resources and capabilities.

“Remember that no two LGUs are alike. There are rich LGUs as these are poor ones. Also, you have to consider that there are different levels to governance, from the barangay to the provincial government,” he said. 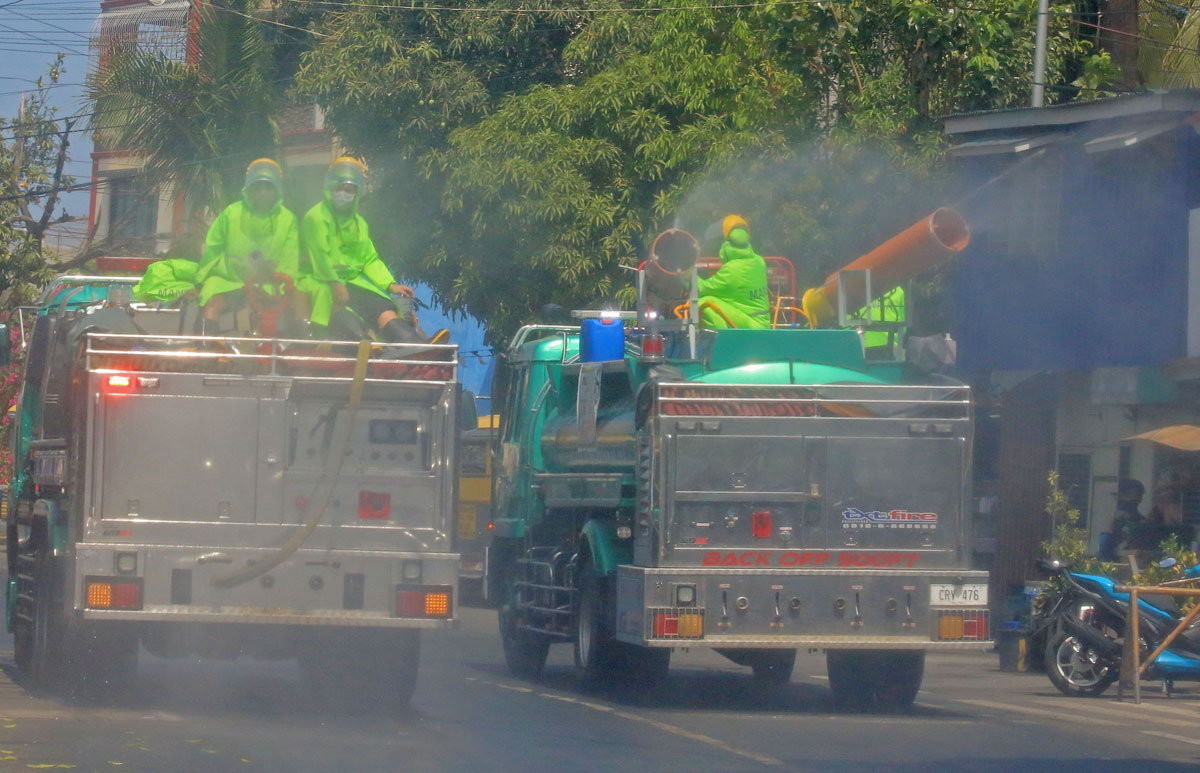 Reining in the handover of ‘power of the purse’

The Senate’s version somewhat diluted the possible constitutionality issues concerning certain provisions in the earlier versions of the bill that give Duterte unbridled power of the purse.

The previous versions would have authorized Duterte to:

The Concerned Lawyers for Civil Liberties opposed these provisions, citing that Article 6, Section 25 of the Constitution only allowed the President to augment items in the General Appropriations Act using savings from other appropriated projects.

The Supreme Court, in its July 1, 2014 decision that declared certain budgetary practices under the Disbursement Acceleration Program as unconstitutional, said the President could not prematurely declare budgetary items as “savings” in order to divert them to projects identified by the executive branch and not by Congress.

To fix the defects in the original proposal, the Senate had to specify that the savings should be realigned to projects “directly related” to operations against COVID-19, instead of giving Duterte wholesale discretion to divert funds to whatever purpose he wants.

It even specified several priorities: the budgets of hospitals, the calamity fund, programs for displaced workers, livelihood programs, financial assistance for rice farmers, distribution of food and other times, allocations to local government units, and quick response funds.

The approved bill will also limit Duterte’s authorization to savings derived from the budgetary items for the executive branch, as opposed to earlier proposals to let his hands touch the funds of the independent branches of government.

The Senate also limited the effectivity of the bill to three months, “unless extended by Congress.” This was more definite and less reliant on Duterte’s discretion than the original proposal of “two months or longer if the calamity will persist, as may be determined by the President.”

For Bagares, “we can still somehow see the beauty of our bicameral system” when the Senate reined in the House’s efforts to hand so much power to Duterte.

“Here we see that a proposed law from the Palace utilizing a ‘control’ approach to addressing COVID-19 was tempered by the legislature, especially the Upper House,” Bagares told The STAR. “Many of the problematic provisions of the original proposal (especially the takeover proposals and those on presidential control of what should be the legislative power of the purse) have been removed.”

Olalia, however, said such attempts to refine the provisions and assuage fears of an overly powerful President did “not ease the pain of a broken trust.”

“Congress can still extend it. And Congress has proven that it will follow and obey the President’s wishes and submit to its commands even if it follows formalities and go through the motions,” Olalia cautioned.

“The proposed shotgun law to give so-called special powers to one person remains unnecessary, overbroad, disproportional and constitutionally problematic. It is a shotgun approach. These broad and expansive powers generously given to one man, even if arguably well-meaning, will crash land on all of us,” he said. 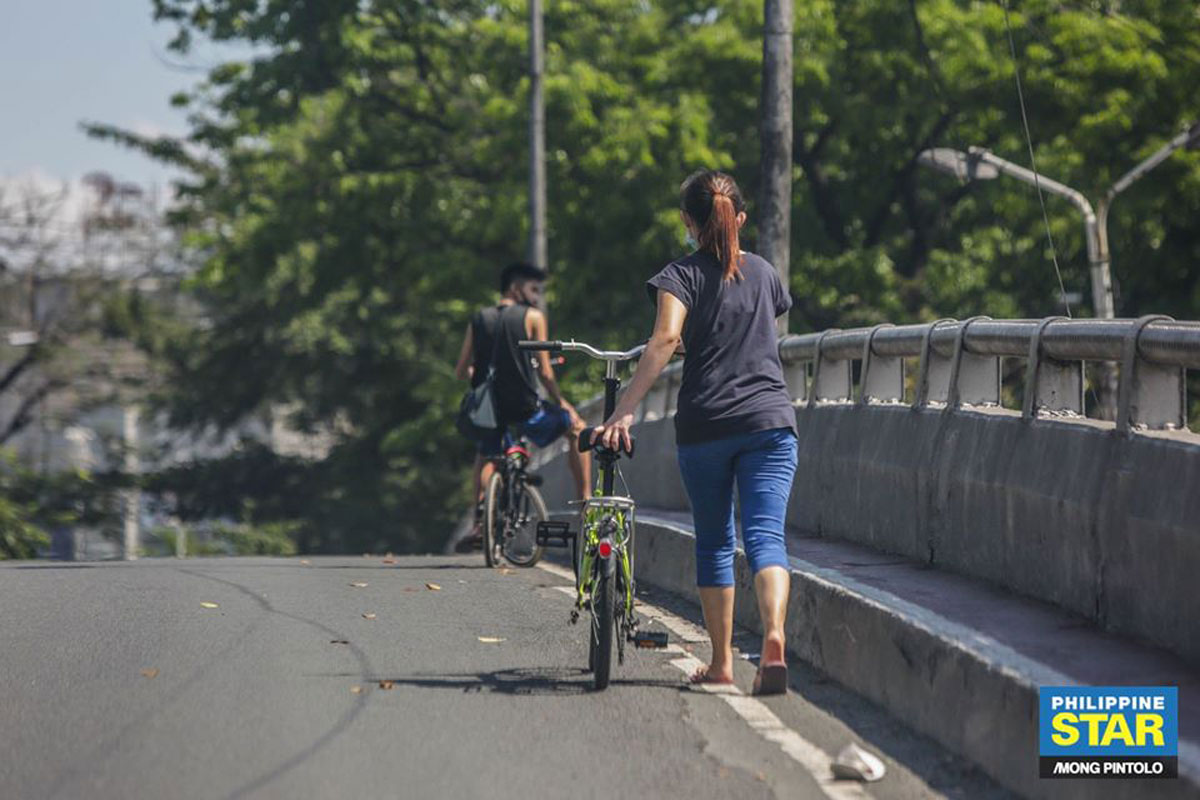 What about existing laws?

Bagares, as well as the Free Legal Assistance Group, agreed that expanding Duterte’s powers was unnecessary when existing laws should enable him to do his job of addressing the health emergency.

FLAG specifically pointed to Republic Act No. 11332, or the Mandatory Reporting of Notifiable Diseases and Health Events of Public Health Concern Act, which Duterte himself signed last year. The law was aimed at strengthening collaboration, establishing a disease surveillance and response system, and providing sufficient funding.

The human rights group also found unnecessary the authorization to procure goods and lease real property, facilities and critical services without the need for public bidding and compliance with the Government Procurement Reform Act.

It said the procurement law itself already provides leeways in cases of emergency. In fact, the Government Procurement Policy Board on Monday issued simplified guidelines allowing negotiated procurement in emergency cases and providing shortcuts regarding certain requirements. 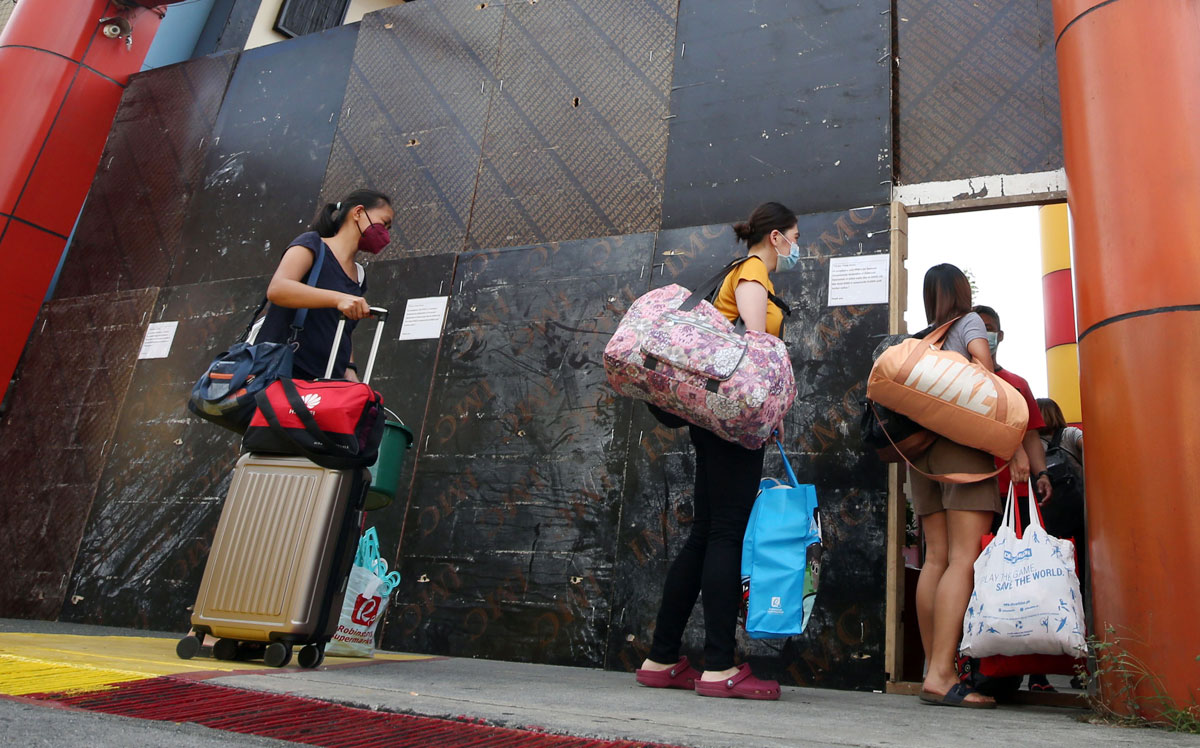 On top of the lack of necessity for the proposed law, FLAG said the approved version of the bill retained provisions that would allow Duterte to violate the constitutional principle of separation of powers among the branches of government.

One such provision would allow the President to dictate “alternative working arrangements” for the other independent branches of government – including Congress and the courts – “whenever it becomes necessary.”

FLAG added that the legislative powers to ensure the availability of credit, liberalize the grant of incentives, move statutory deadlines, and require business to prioritize and accept vital contracts “cannot be validly delegated” to the Chief Executive.

“No  standards  are  provided  for  the  exercise  of these  powers,  leaving  to  the  President  the  sole  discretion  on  when  and  how  these powers  are  to  be  exercised.  This  constitutes  an  unconstitutional  delegation  of legislative  powers,” it said.

Despite these concerns, the bill was passed by an overwhelming majority of congressmen and senators.

Hontiveros said existing laws were already sufficient and only a supplemental budget should have been passed to allow mass testing, expand the capacity to treat COVID-19 and provide economic safety nets.

Zarate said Congress virtually gifted Duterte with a “presidential pork barrel,” despite the reported abuses of vulnerable sectors in the society under enhanced community quarantine.

Cabochan said: “By approving this bill, we, the Congress, are effectively passing all the work and conferring all the powers to the President as if making him a lone savior of the crisis we are facing now.”

Whether this would work out, Cabochan added, can be gleaned in how Duterte handled the 2017 conflict in Marawi City, which has yet to rise from the ashes.