Presidential spokesman Harry Roque says there’s no truth to the provincial status, but netizens and politicians are angry when reminded of a phrase that came out of President Duterte’s mouth. 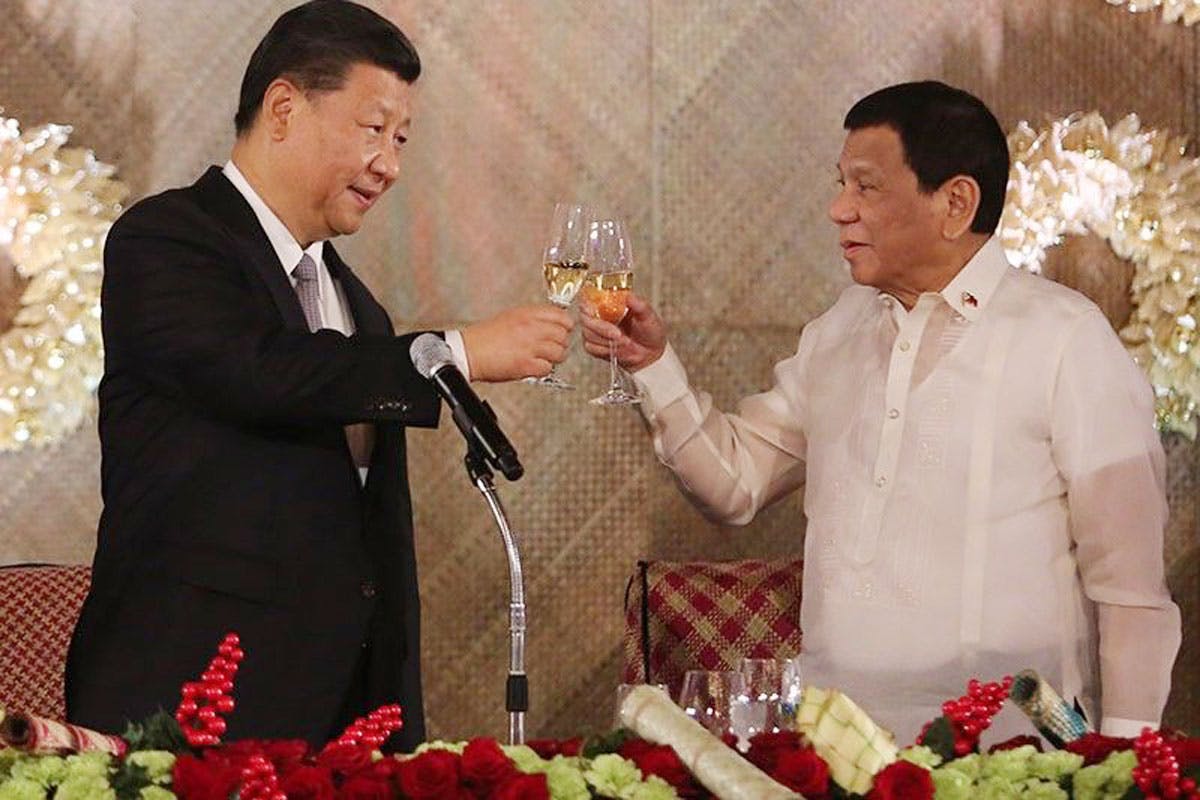 Chinese President Xi Jinping and President Duterte offer a toast during a state banquet at Malacañang’s Rizal Hall on Nov. 20, 2018. Xi was in the Philippines for a series of bilateral meetings and signing of agreements between the two countries. The Philippine STAR file photo

Two years after President Duterte joked about the “Philippines, Province of China,” the geotag has surfaced on social media.

The geotag, which marks the location of social media posts, appeared on Facebook and sister site Instagram over the weekend. The phrase, which originated from Duterte’s Feb. 19, 2018 speech, provoked uproar among netizens and politicians.

In a press briefing on Monday, May 18, presidential spokesman Harry Roque said only that it was fake news and declined to comment further.

The Philippine STAR columnist Pepper Teehankee asked how Facebook could “allow these locations when these don’t even exist!” He gave users the following steps to help take down the geotag:

“Let us not allow China and its lapdogs to insult the memory of our heroes,” Teehankee said. “We are proud Filipinos. The Philippines is ours and ours alone.”

Lawyer Monalisa Barro shared similar instructions on Facebook last May 16. “Hindi po ako interesado malaman kung sino ang may kagagawan ng geotag na ito, bakit at paano ito nangyari. Interesado po ako na maitama ang pagkakamaling ito sa lalong madaling panahon (I am not interested to know who is behind this geotag, and why and how this happened. I am interested in correcting this error in the soonest time),” Barro said. (Barro was initially identified in this article as legal officer of the International Committee of the Red Cross Delegation to the Philippines but she clarified that she was no longer connected to the organization for two years now.)

Sen. Risa Hontiveros urged Twitter followers to mass report the erroneous geotag. “Even if this Philippines Province of China geotag is a ‘joke,’ let us not allow it to be normalized,” she said.

Kabataan Party-list Rep. Sarah Elago said: “Philippines is NOT a Province of China! #AtinAngPinas #PHNotforSale.” Former social welfare secretary Judy Taguiwalo, who was part of Duterte’s Cabinet until her rejection by the Commission on Appointments, asked the public to “please report” the geotag. She mentioned the hashtag #ChinaLayas.

Carpio recalled Duterte’s words during the oath-taking of National Commission for Culture and the Arts officials on Feb. 26, 2020: “You might as well choose. We can be a territory of the Americans or we can be a province of China.”

For Carpio, Duterte chose the latter option, as indicated by his imposition of a condition that “we have no business being a Republic” if the country could not stand alone militarily and be as capable as the superpowers.

Carpio also noted Duterte’s vow during his state visit to China on Oct. 20, 2016: “I realigned myself in your ideological flow… I will be dependent on you for all times.” For Carpio, this meant: “President Duterte declared himself a vassal of China for life and beyond. Now, he wants Filipinos to join him by making the Philippines a province of China.”

“This is the supreme insult to Philippine sovereignty and to Filipinos by a sitting Philippine President,” Carpio declared. 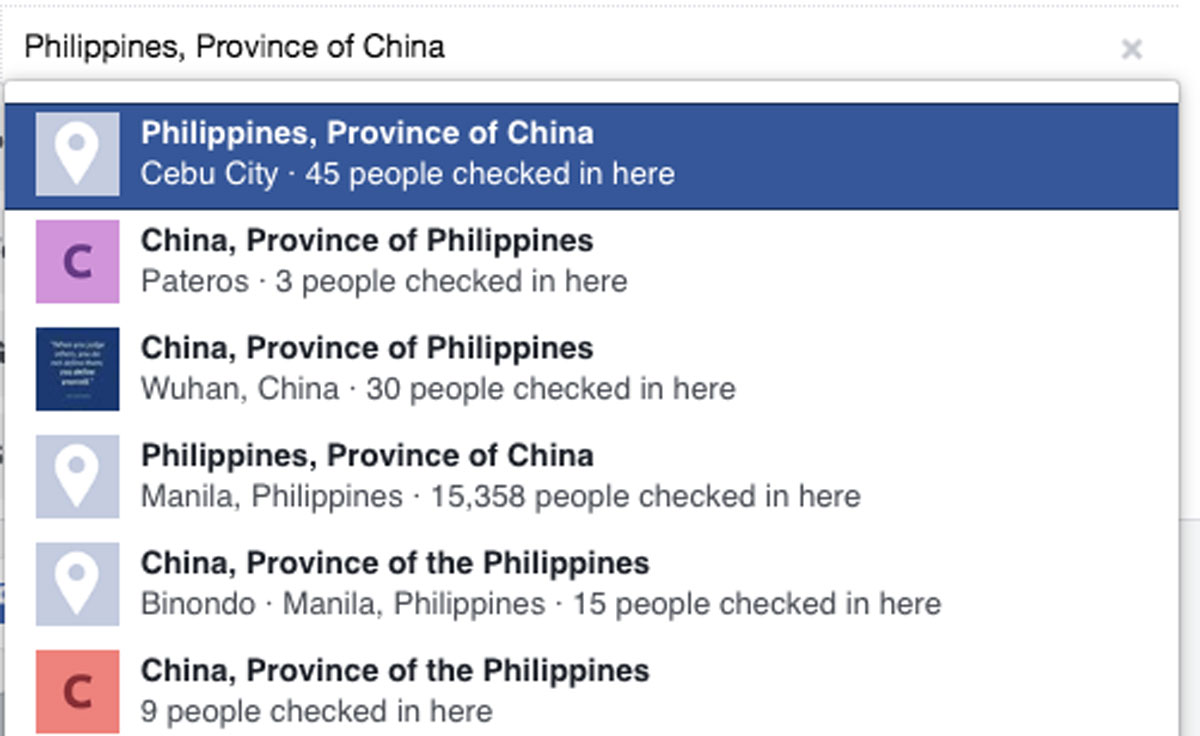 Duterte sang praises to Chinese President Xi Jinping and then Chinese ambassador to the Philippines Zhao Jianhua in celebration of the 20th founding anniversary of the Chinese Filipino Business Club Inc. on Feb. 19, 2018.

Duterte spoke of Xi’s commitment that “they will not build anything there sa (in) Scarborough Shoal” and described his counterpart as “a man of honor.”

“Kaya nga sabi ko, ‘why are you so sparing?’ Gusto ninyo gawain na lang ninyo kaming province, Fujian pati Philippine province of China, eh ’di wala tayong problema (Which is why I said, ‘why are you so sparing? If you want, just make us a province, Fujian and the Philippine province of China, then we will have no problem),” Duterte said. (Many Chinese Filipinos are descended from Fujianese migrants.)

Duterte repeated the joke when he spoke about the proposed joint oil exploration with China, in which the Philippines would surrender a big chunk of the windfall from its exclusive economic zone.

Duterte suggested that China let go of Taiwan – which Beijing considers as a breakaway province under the “One China” policy observed by the Philippines and all but 15 states – since it is much smaller.

“Let it float there. Makuha mo ang Philippines, wala nang problema kasi maraming pera eh (Get the Philippines and there will be no more problem because there will be a lot of money),” he said.

On July 12, 2018, the second anniversary of the Permanent Court of Arbitration’s ruling that invalidated China’s “nine-dash-line” claim over nearly the entire South China Sea, tarpaulins bearing the words “Welcome to the Philippines, Province of China” were hung from several footbridges in Metro Manila. Roque at the time said that enemies of the government were behind the banners.

Since then, China was reported to continue reclamation activities and construction of facilities in other Philippine-claimed features in the Spratly Islands, such as Mischief (Panganiban) Reef, Fiery Cross (Kagitingan) Reef and Subi (Zamora) Reef. Not even the ongoing coronavirus disease 2019 pandemic has stopped China’s building activities.

While Scarborough (Panatag) Shoal has not been developed by the Chinese into another artificial island like the other maritime features in the Spratly Islands, it remains heavily patrolled by Chinese vessels. In April, China named the new districts of Nansha and Xisha to take jurisdiction over its claims in the South China Sea, drawing a “strong protest” from the Department of Foreign Affairs.

Meanwhile, the Duterte administration offered a 40 percent share to China in the joint oil exploration, bigger than the one-third share he had touted two years ago. National Security Adviser Hermogenes Esperon claimed on Oct. 25 last year that the Philippines could still end up getting more than 60 percent as talks began over the deal.

In interviews, Carpio has said China’s agreeing to such a deal could imply acknowledgment of Philippine sovereign rights over the area to be explored. 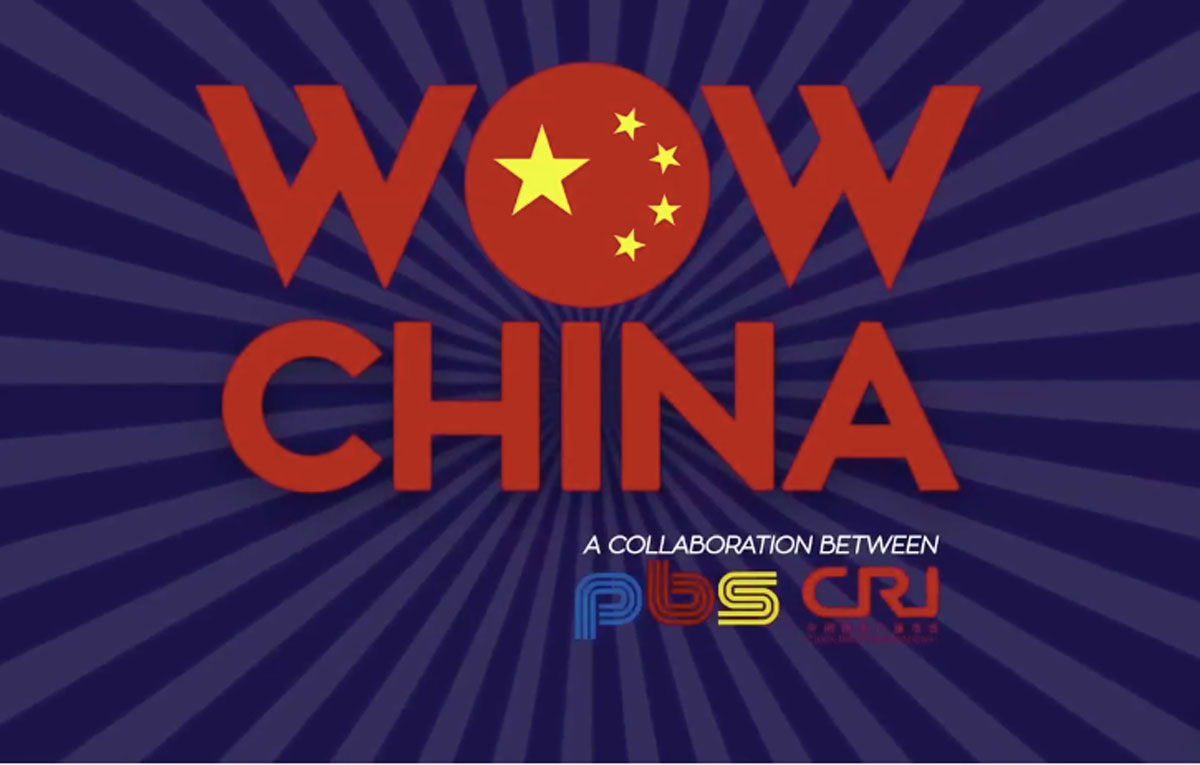 This is not the only instance that entire neighboring countries are being claimed to be part of China.

Delhi-based English-language website WION reported that certain Chinese websites have published articles claiming that the former Soviet Union republics of Kyrgyzstan and Kazakhstan were once part of China.

Tuotiao.com, which has more than 750 million readers, asked in a headline: “Why didn’t Kyrgyzstan return to China after gaining independence” and argued that it used to fall under the Khan dynasty. Meanwhile, Sohu.com ran an article titled “Why Kazakhstan wants to return to China” and claimed that the world’s largest landlocked country “is located on territories that historically belong to China.”

According to international news agency Kazinform, the Kazakhstan government immediately summoned Chinese Ambassador Zhang Xiao over the offending article. Days later, the Global Times, an English-language website under the Chinese Communist Party’s People’s Daily newspaper, took exception to the “nationalist misleading articles” even as it sought to downplay their reach.

Meanwhile, reacting to the controversy over the geotag, Foreign Affairs Secretary Teodoro Locsin Jr. dismissed the issue. He hinted that Filipinos, not the “too smart” Chinese, were the ones propagating the geotag by making an issue out of it.

“You’re giving it importance. Chinese are too smart to believe that crap; any of them tries coming over without a visa from me and he’ll be detained and sent back where he came from at his own expense. At the rate you’re all going they will have 110 million check-ins,” Locsin posted on Twitter.

Roque asked fact-checkers designated by Facebook to look into the geotag. He questioned why fact-checkers allowed such geotag in the social media platform.

“Please tell that to Vera Files and Rappler because they are the alleged truth verifiers of Facebook. Of course, there is no proof to that (geotag). Why would I react to that?” Roque said. “I am calling the attention of Vera Files and Rappler. They are the fact verifiers of Facebook. Why was this allowed? I hope they really flag the fake news, clearly fake news I should not comment on.”

VERA Files president Ellen Tordesillas said her group verifies false and misleading information made by public personalities and posts on social media, and debunks them with factual evidence.

“We do not fact check location tags,” Tordesillas said in a statement. “The Facebook tag of the Philippines as a province of China is a reflection of a sovereignty issue with China which should be addressed by the Philippine leadership.”

Vera Files and Rappler were Facebook’s partners in its “third-party fact-checking program” launched on April 13, 2018. Vera Files is certified as a fact-checking organization through the nonpartisan International Fact-Checking Network at Poynter.