President Duterte announced new quarantine classifications in an address aired on Friday morning, July 31, for various areas in the country as well as the government’s readiness to distribute vaccines for COVID-19 for free. 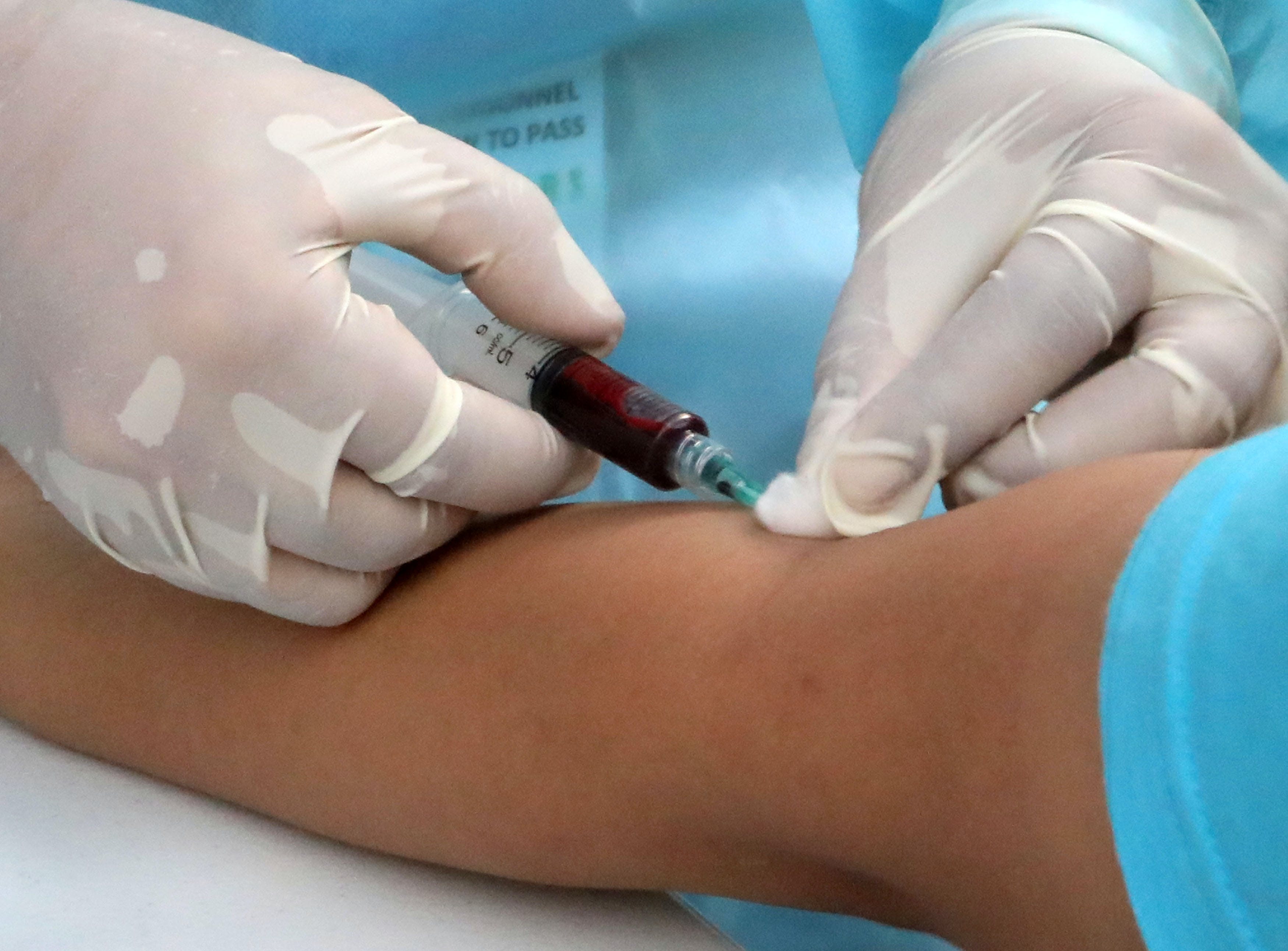 A resident of Parola compound in Tondo, Manila avails himself of serology testing for coronavirus disease 2019 on July 28, 2020 through a mobile clinic deployed by the city government. Photo by Edd Gumban, The Philippine STAR

Metro Manila will remain under general community quarantine (GCQ) starting Aug. 1 to Aug. 15 along with Bulacan, Batangas, Cavite, Laguna, and Rizal for Luzon; Lapu-Lapu City, Mandaue City, Talisay City, Minglanilla and Consolacion for the Visayas; and Zamboanga City for Mindanao.

The new classifications were announced during President Duterte’s Talk to the Nation aired on Friday morning, July 31 to continue to curb the transmission of coronavirus disease 2019 (COVID-19). It was recorded on Thursday night, July 30.

Cebu City was downgraded to GCQ from modified enhanced community quarantine (MECQ) as officials as COVID-19 cases in the area started to be contained.

The rest of the country are under modified GCQ or MGCQ also until Aug. 15. 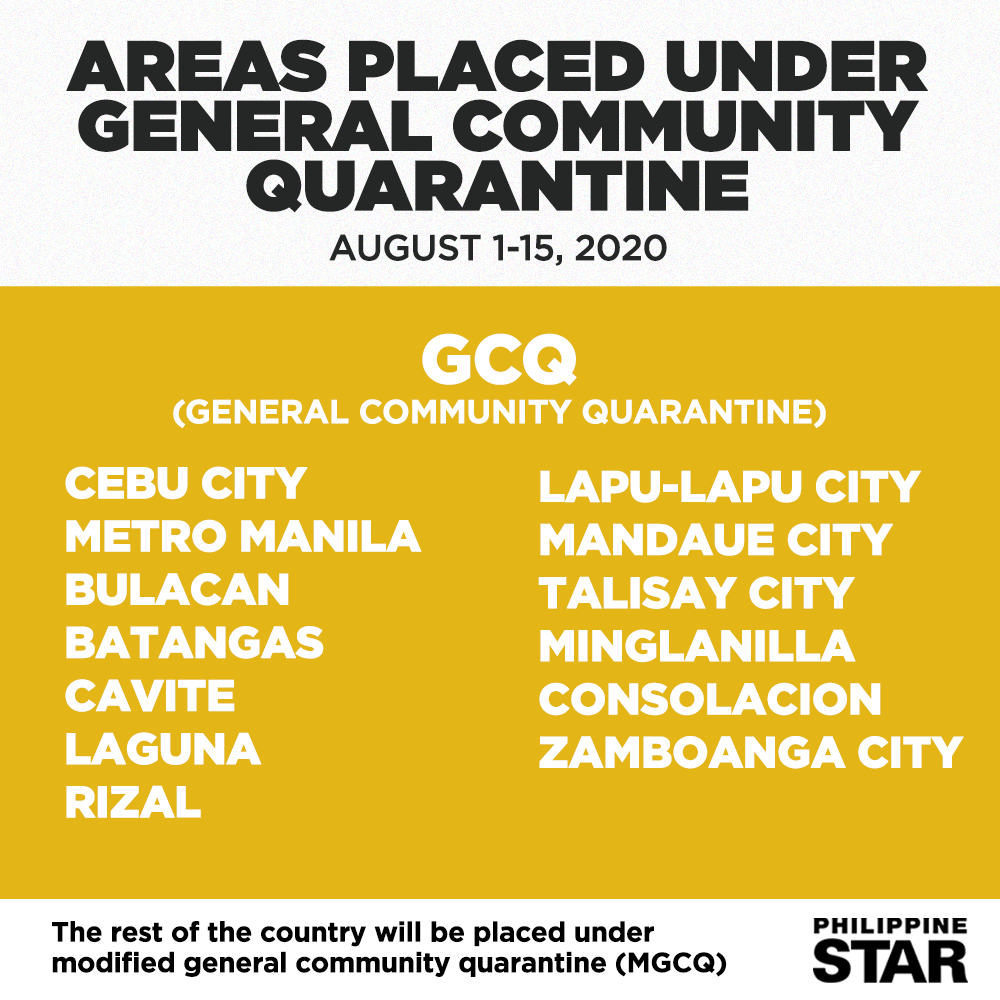 Under Resolution No. 60-A of the Inter-Agency Task Force for the Management of Emerging Infectious Diseases dated July 30, the local government units (LGUs) of the National Capital Region or NCR and Region 4-A are directed to do the following in coordination with the National Task Force (NTF) Against COVID-19, the Department of the Interior and Local Government, the Coordinated Operations to Defeat Epidemic Teams:

•  Strict adherence to Oplan Kalinga implementation or the transfer of mild or asymptomatic COVID-19 patients from home quarantine to isolation centers by health workers, not by police

Meanwhile, government hospitals in NCR and Region 4-A are directed to increase their hospital beds dedicated to COVID-19 by up to 30 to 50 percent while private hospitals are enjoined to allot up to 20 to 30 percent.

Health Undersecretary Leopoldo Vega, also the NTF treatment czar, is tasked to monitor the compliance of hospitals in these areas and to the One Hospital Command System in NCR, Region 3, and Region 4-A.

LGUs are also mandated to submit daily updates and weekly comprehensive reports containing daily trend of active cases, number and percent of population; cases in community isolation facilities versus those in medical institutions and their homes for priority areas or barangays under localized lockdown.

Included metrices to be submitted by LGUs are the percentage of close contacts traced and percentage of contacts in quarantine; number of utilization of community isolation beds health system capacity targets utilization that are met; and COVID Special Teams investigations and results.

Other highlights of the President’s address are the following:

– Duterte is banking on China’s promise that it will prioritize the Philippines once vaccine for COVID-19 is developed, stressing that by December, everything will be back to normal.

– According to Finance Secretary Carlos Dominguez III, the cost of the 40 million doses of vaccine will be around P20 billion and that three firms – one from China, one from the United Kingdom and one from the United States – are in advanced stages of developing vaccines.

– The vaccines will be distributed for free to the poorest of the poor, especially those receiving assistance from the government, and the middle class or a total of P20 million Filipinos. 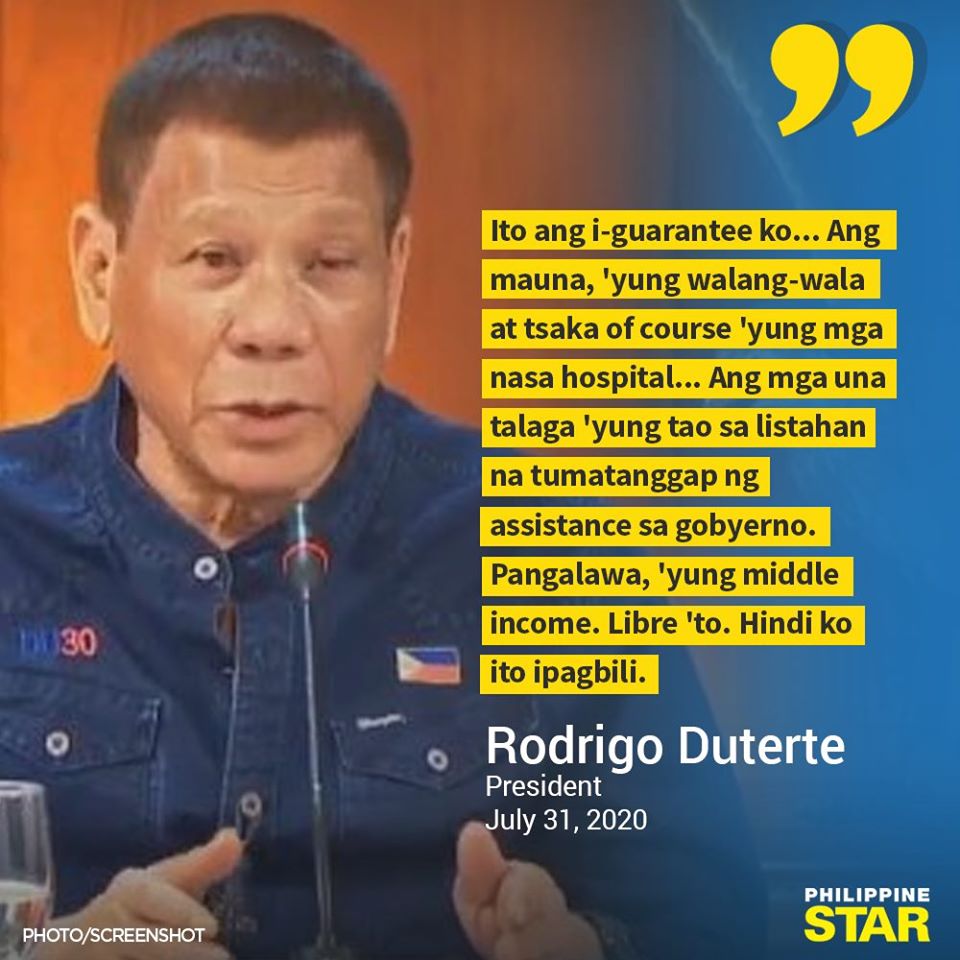 "Magtiis tiss lang kayo. Nandyan na eh. ‘Yun ang pinagdadasal ko sa Diyos na for God’s guiding light so that these guys (will be) done making the vaccine. Almost by December, tapos ‘to lahat. As fast as we can,” Duterte said. 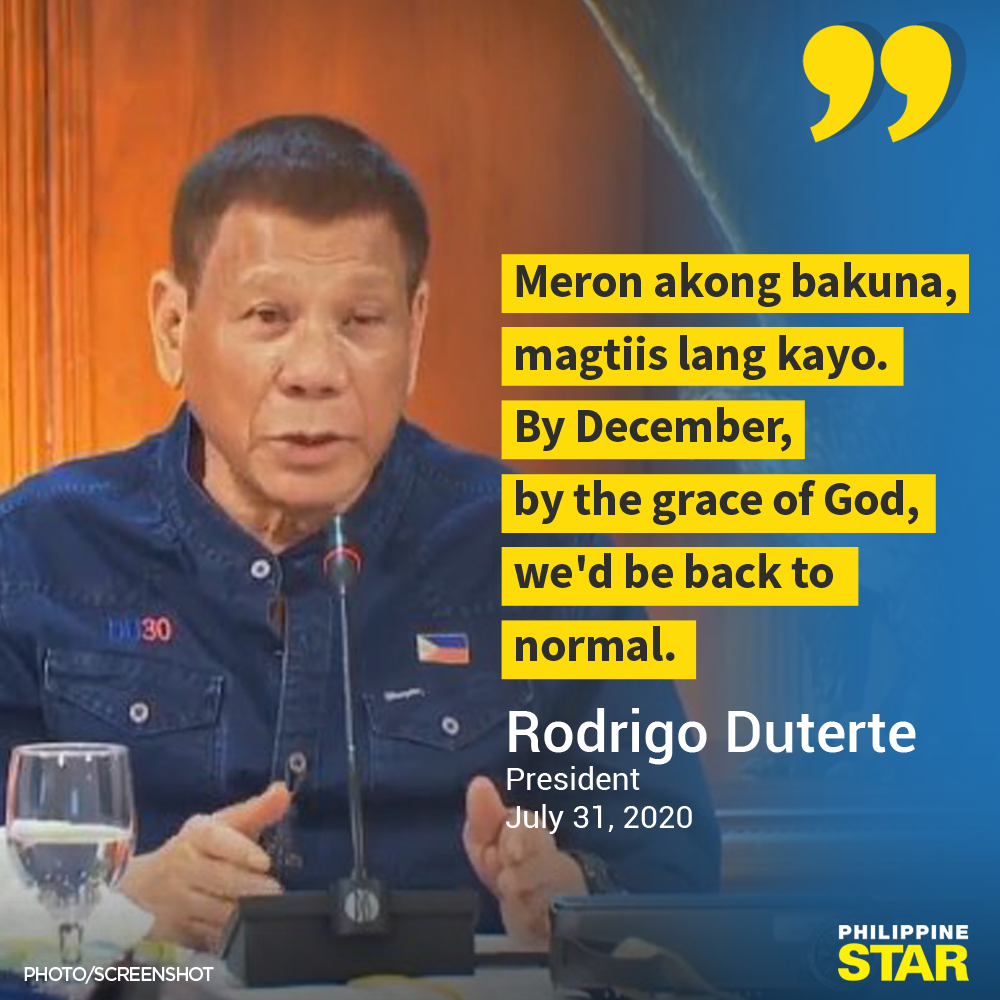 – The President quipped that since the Armed Forces would lead the distribution of the COVID-19 vaccine, the military could use “bayoneta” or bayonet instead of a needle in case his "enemies" are getting the vaccine.

– He added that drug pushers and drug addicts will get empty vials as they will be excluded from receiving a COVID-19 vaccine. 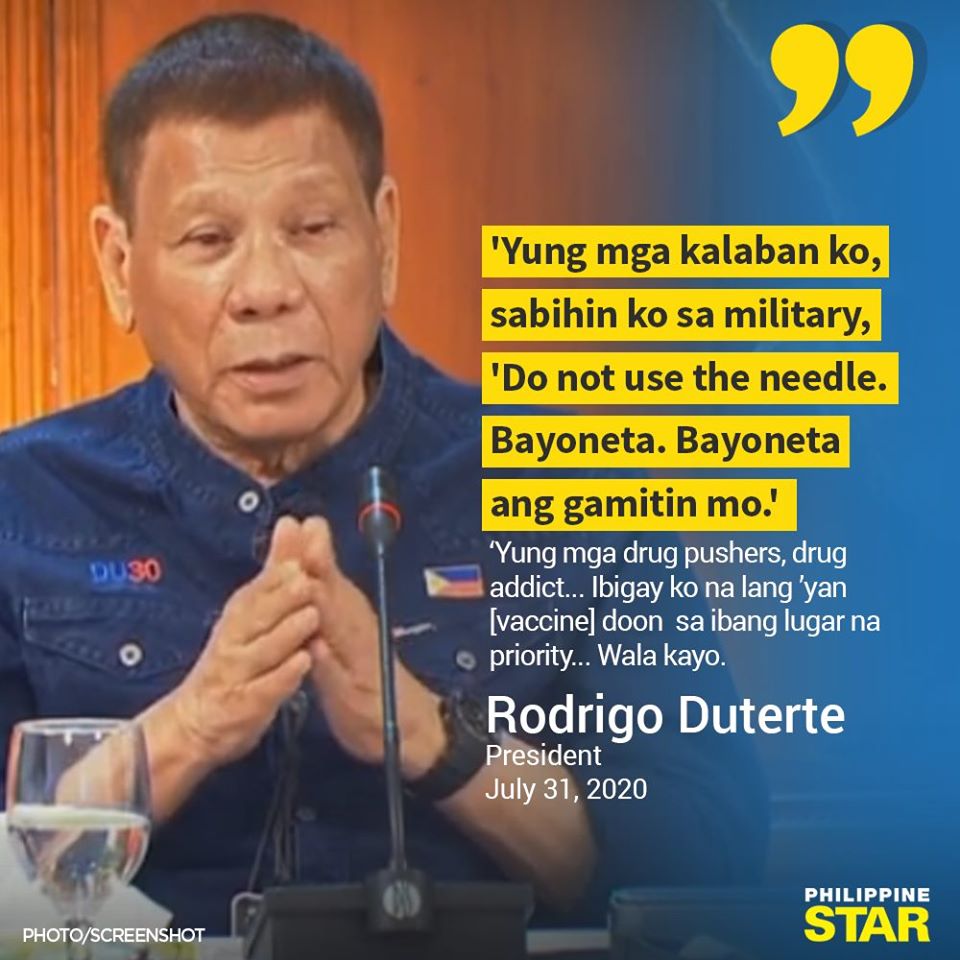 – The finance secretary also said the government has funds to spend because it was able to borrow money from lenders. 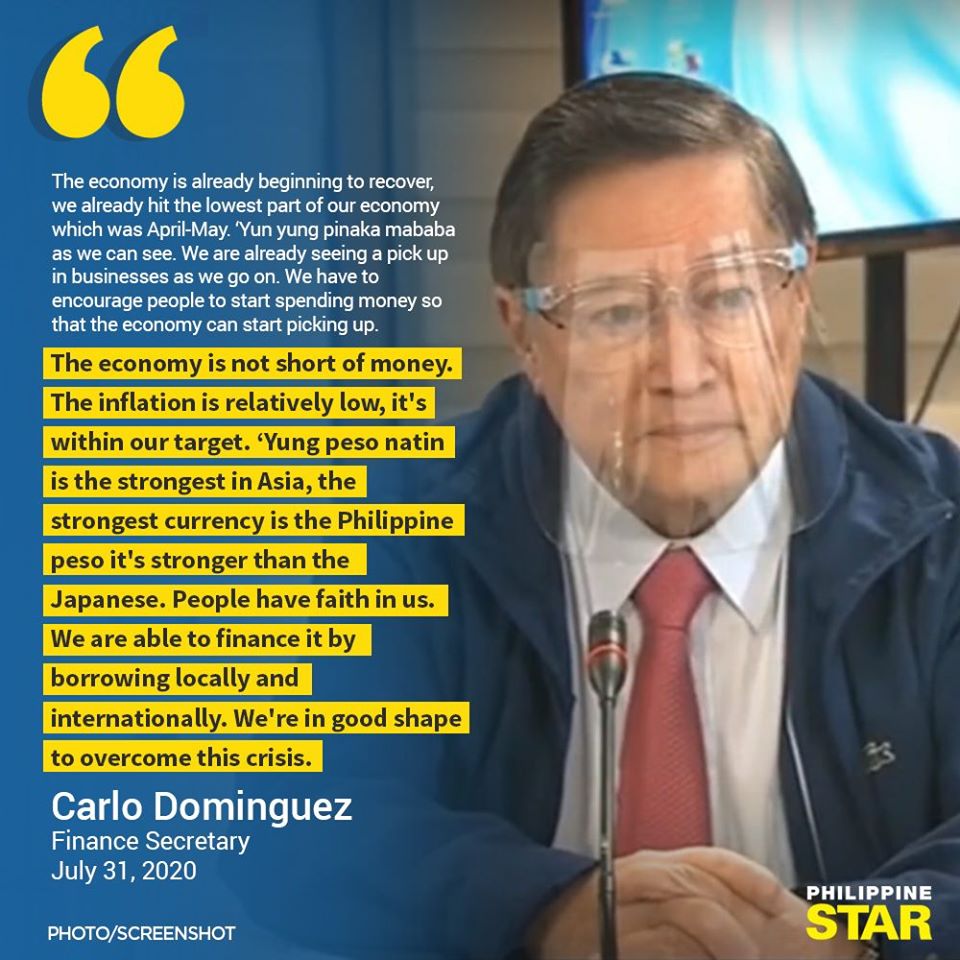