Locsin Apologizes To Chinese Counterpart; Only Duterte Can Use Expletives – Palace

Presidential spokesman Harry Roque made it clear to Foreign Affairs Secretary Teodoro Locsin Jr. and other Cabinet members that only President Duterte can curse and spew invectives in public, especially in situations that can affect diplomacy. 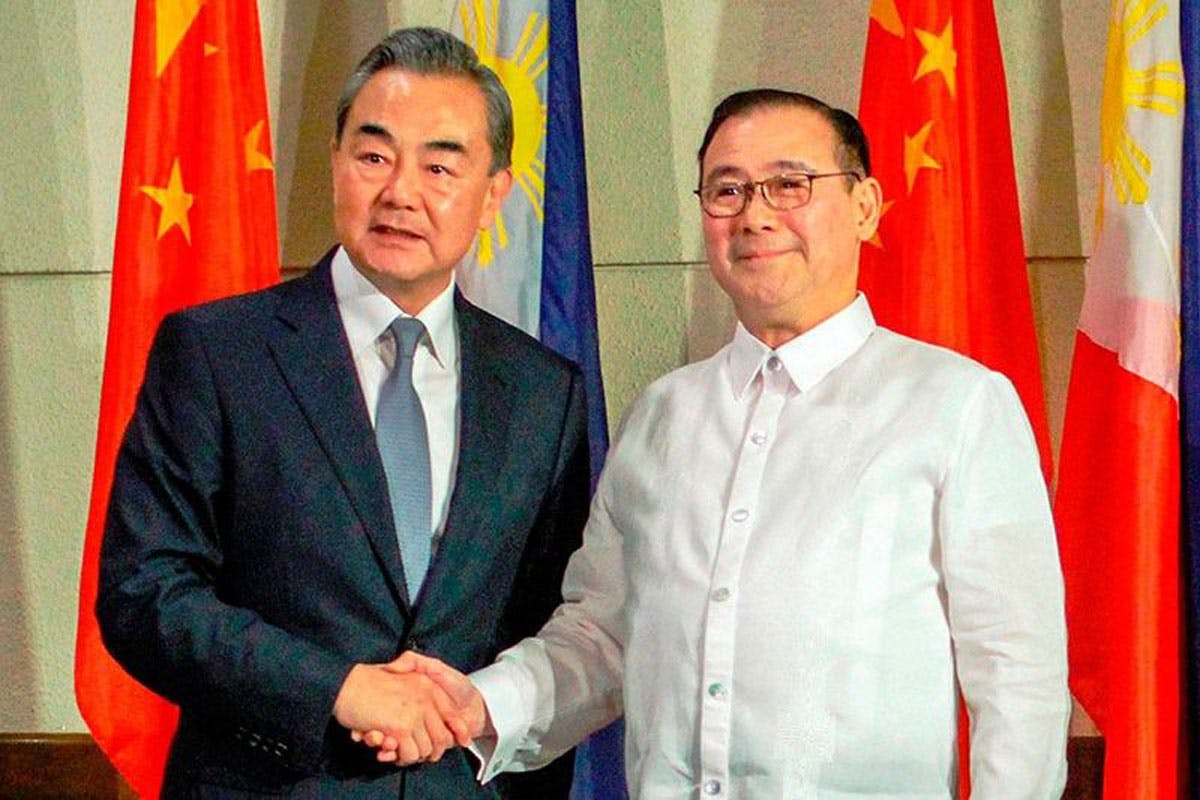 China’s foreign ministry spokesperson Wang Wenbin assailed Locsin for his “megaphone diplomacy” and advised him to “mind basic manners and act in ways that suit his status.”

“Facts have proven time and time again that megaphone diplomacy can only undermine mutual trust rather than change reality,” the Chinese official said in a press conference in Beijing.

Malacañang, for its part, said only President Duterte could use expletives in his public pronouncements.

Locsin said he apologized to Wang, contrary to the statement of presidential spokesman Harry Roque that it was to Chinese Ambassador Huang Xilian that he personally apologized over his “get the f***k out” tweet on Monday, May 3.

“Our friendship is open and candid; we talk out issues after the formal presentation of this or that complaint or initiative. Last meeting for one hour lasted 3; mostly on what might best be done in bad situations. I’d deeply regret losing his friendship,” Locsin tweeted.

“I won’t plead the last provocation as an excuse for losing it; but if Wang Yi is following Twitter then I’m sorry for hurting his feelings but his alone,” he said, adding only Wang’s opinion matters.

He emphasized he only apologized to Wang and not to the Chinese ambassador.

“Not to the Chinese ambassador. It’s his job to take complaint or insult. To State Counselor Foreign Minister Wang Yi, the smartest and most personable diplomat in the whole world,” he said in English and Filipino. “Harry understands my hair-trigger temper under repeated provocation.”

He added Wang’s elegance is his “elusive dream to copy until I attain in mind and manner.”

On Monday, Locsin told China to “get the f**k out” of Philippine waters as he filed two more diplomatic protests over the “incessant, illegal” presence of its fishing boats in the WPS and its coast guards’ “shadowing, blocking, dangerous maneuver and radio challenges” against the Philippine Coast Guard (PCG).

Roque, meanwhile, made it clear to Locsin and other Cabinet members that only President Duterte can curse and spew invectives in public, especially in situations that can affect diplomacy.

“So, I repeat, the message of the President in the field of diplomacy: there is no space for expletives. The President’s message is addressed to all members of the Cabinet. Only the President can curse, nobody can imitate his ways,” Roque said in Filipino.

“I think what was clear from the President’s instruction to me last night after our private meeting with (Defense) Secretary (Delfin) Lorenzana is that he does not approve of the use of profanities, particularly in the field of diplomacy,” he said, when asked if Duterte was angered by Locsin’s pronouncements.

“The President is the principal and all the Cabinet members are alter egos. So, I guess the guidance being given by the President now is you have no authority to use profanities, particularly in the sensitive field of diplomacy,” Roque explained.

During his talk to the nation on Monday night, Duterte said “China remains to be our benefactor” and “if I may just add something to the narrative, just because we have a conflict with China doesn't mean to say that we have to be rude and disrespectful.”

“As a matter of fact, we have so many things to thank China for – the help in the past and itong mga tulong nila ngayon,” Duterte added. The President has been thanking China for donating one million doses of COVID-19 vaccine developed by Sinovac Biotech Ltd. to the Philippines.

In contrast, Duterte repeated his tirades against retired Supreme Court senior associated justice Antonio Carpio and former foreign affairs secretary Albert del Rosario as well as his claims that the country lost Scarborough Shoal and the WPS during their time.

He cursed at the two and said Del Rosario should not have asked the country’s vessel to retreat during a standoff with China in Scarborough Shoal in 2012.

Duterte has been reiterating this issue even as Carpio and Del Rosario had been saying that nothing was lost during their time as the country won its arbitration case against China in 2016.

Early on in his presidency, Duterte also cursed and insulted former United States president Barack Obama, the European Union, the United Nations (including its then secretary general Ban Ki-moon), then US presidential candidate Donald Trump, former US ambassador to the Philippines Philip Goldberg, International Criminal Court prosecutors, among others.

While mayor of Davao City, Duterte turned on Pope Francis when he got stuck in traffic during the pontiff visit to the Philippines in 2015. "I wanted to call him: 'Pope, son of a whore, go home. Do not visit us again,’" he said, later writing to the Pope to apologize for his outburst.