While the overall total of deaths dropped from 2020, the Committee to Protect Journalists said the number of confirmed retaliatory murders remained roughly the same, suggesting that journalists continue to be seen as targets. 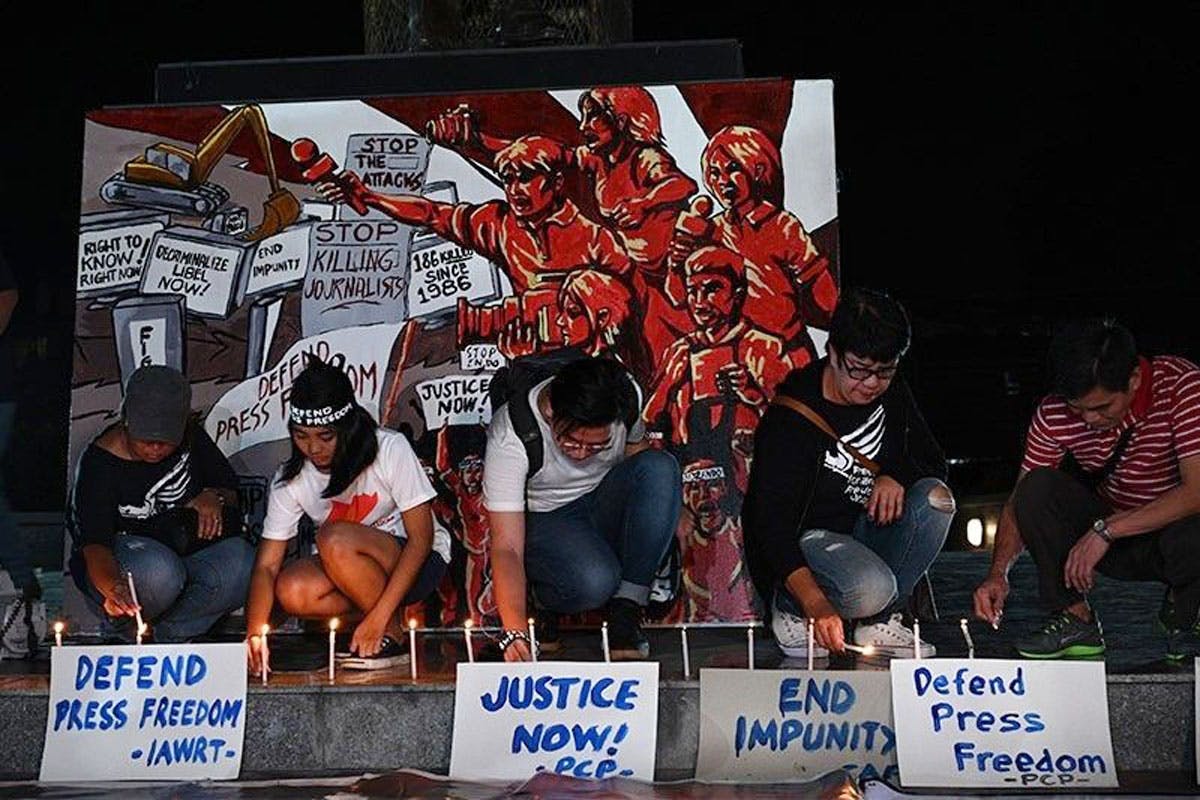 Relatives and supporters of the Maguindanao massacre victims, including journalists, light candles during a vigil at a park in Manila on Dec. 18, 2019, the eve of a court verdict on the case. Photo by AFP

The Philippines remains one of the deadliest countries for journalists in the world, according to the latest report of the New York-based Committee to Protect Journalists.

CPJ data showed that two of 27 journalists killed last year were Filipinos: dyRB’s Renante Cortes, who was shot dead in front of the radio station in Cebu on July 22, and Manila Standard’s Jesus Malabanan, who was killed in Calbayog City on Dec. 8.

The CPJ said it is also investigating to determine if the killing of Orlando Dinoy of Newsline Philippines on Oct. 30 in Davao del Sur was related to his work.

Out of the 27 journalists killed last year, CPJ deputy editorial director Jennifer Dunham said 21 were singled out for murder in retaliation for their reporting.

“Four more were killed while reporting from conflict zones, and two others were killed covering protests or street clashes that turned deadly,” Dunham said.

The CPJ said at least 18 other killings are being investigated to determine whether these were work-related.

“While the overall total of journalist deaths dropped from 2020’s number of 32, the number of confirmed retaliatory murders remained roughly the same, suggesting that journalists continue to be seen as targets,” Dunham said.

Based on CPJ data, India had the most number of journalists killed last year with five, followed by Mexico with three.

The Philippines, Afghanistan, Pakistan, Azerbaijan, Burkina Faso, Myanmar and Somalia had two cases each, while Ethiopia, Bangladesh, Colombia, Congo and Lebanon had one each.

Meanwhile, Mexico had six journalist killings that have yet to be confirmed if related to their work, followed by Afghanistan with two. The Philippines, Pakistan, Ethiopia, Greece, Haiti, Indonesia, Israel, Netherlands and Yemen each had one.

CPJ said it considers a case work-related “only when its staff is reasonably certain that a journalist was killed in direct reprisal for his or her work; in combat-related crossfire; or while carrying out a dangerous assignment such as covering a protest that turns violent.”

“If the motives in a killing are unclear, but it is possible that a journalist died in relation to his or her work, CPJ classifies the case as ‘unconfirmed’ and continues to investigate,” it added.

Data from the National Union of Journalists of the Philippines said at least 22 journalists have been killed in the Philippines during the Duterte administration, with Sultan Kudarat-based commentator Jaynard Angeles being the latest on Jan. 12.

On Dec. 31, 2021, the International Federation of Journalists (IFJ) said a total of 45 journalists were killed worldwide in 2021  – “one of the lowest death tolls” it has recorded for any year.

The figure tracked closely with a toll of 46 killings of journalists given earlier by another media watchdog, Reporters Without Borders (known by its initials RSF), which also noted it as its lowest-ever since starting its tallies in 1995.

"While this decrease is welcome news, it is small comfort in the face of continued violence," the Brussels-based IFJ said in statement.

The toll included nine in Afghanistan, the highest number suffered by a single country.

Elsewhere, eight died in Mexico, four in India and three in Pakistan.

The IFJ said the media workers “more often than not are killed for exposing corruption, crime and abuse of power in their communities, cities and countries.”

According to the group’s count, the Asia-Pacific region – which includes Afghanistan – was the deadliest, with 20 killings. Then came the Americas, with 10, Africa, with eight, Europe with six, and the Middle East and Arab countries with just one. It also mentioned the death of two journalists in a “deadly accident” in Iran.

While "the risks associated with armed conflict have reduced in recent years" because fewer journalists were able to report on the ground, “the threats of crime gang and drug cartels’ rule from the slums in Mexico to the streets of European cities in Greece and the Netherlands continue to increase", it added.

IFJ Secretary General Anthony Bellanger emphasised his organization's support for a UN convention for the protection of journalists to “ensure accountability for journalists’ killings.”

The IFJ's figures differed slightly from those given by RSF, which counted seven journalists killed in Mexico, six in Afghanistan, and four each in Yemen and India.