The fate of Metro Manila and other areas may be known within the week, according to officials. But they stress that the easing of restrictions does not mean that people can relax and no longer follow health and safety protocols. 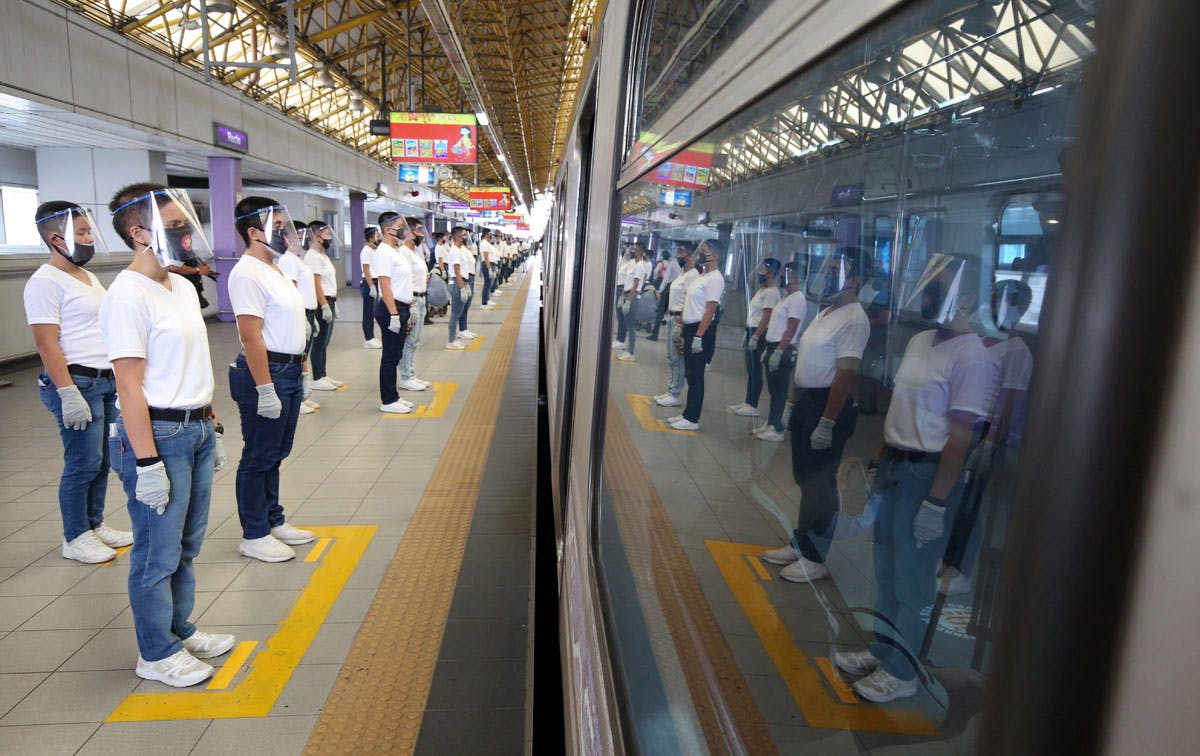 Police trainees participate in the simulation exercise on physical distancing in the LRT-2 at the Recto station on May 26, 2020 in preparation for the resumption of its operations. Photo by KJ Rosales, The Philippine STAR

All 17 mayors of the National Capital Region have expressed support for shifting the NCR to a general community quarantine, raising the possibility that Metro Manila will be placed under GCQ or a modified version by June 1 even as cases of coronavirus disease 2019 in the country continue to rise.

The consensus was reached during a teleconference among the mayors, Metropolitan Manila Development Authority general manager Jojo Garcia announced on “The Chiefs” on One News/TV 5 shortly after the meeting ended on Tuesday night, May 26.

The Inter-Agency Task Force (IATF) for the Management of Emerging Infectious Diseases, with clearance from President Duterte, must give the green light for a shift to a GCQ for Metro Manila, epicenter of the COVID-19 pandemic in the country.

Garcia said the mayors want to retain the option of placing streets, barangays or zones in their jurisdictions under localized quarantine or lockdown if COVID cases increase.

Presidential spokesman Harry Roque said in a press briefing on Tuesday, May 26, that the government may decide today, May 27, whether to relax the restrictions in Metro Manila, which has been under enhanced and then modified community quarantine since March.

Members of the IATF are set to meet today to discuss the COVID-19 situation in the country.

“What is important is we will look at the doubling rate and the critical care capacity, and of course we will pay attention to our economy,” Roque said.

Since May 16, Metro Manila, Laguna, Bataan, Bulacan, Nueva Ecija, Pampanga, Zambales and Angeles City have been placed under MECQ, a transition between the strictest ECQ and GCQ. Only the cities of Cebu and Mandaue in the Visayas remain under ECQ; the rest of the country is now under GCQ. These quarantine classifications are supposed to last until May 31.

Earlier, Defense Secretary Delfin Lorenzana said Metro Manila could be placed under GCQ in June, citing what he described as “encouraging” signs such as single-digit increase in COVID deaths and increasing recoveries.

Interior and Local Government Secretary Eduardo Año said on Tuesday that Metro Manila and other areas under ECQ would soon transition to the less stringent GCQ.

Año announced over dzBB that President Duterte would decide either on Thursday or Friday whether to place Metro Manila and other areas under GCQ or extend the MECQ.

He said they were waiting for the recommendation of the Metro Manila Council on whether the region is ripe for a GCQ to allow more economic activities.

Año said local government units (LGUs) could impose their own lockdown of barangays, neighborhoods or subdivisions with high COVID-19 cases.

He likened this to surgical operations wherein only certain areas with at least 20 COVID-19 infections will be closed to prevent the virus from spreading. Those without cases, called buffer zones, will stay open for business.

Last week, peace adviser Carlito Galvez Jr., also the chief implementer of the national policy on COVID-19, said the government may limit lockdowns to barangays or villages with COVID cases to reduce the impact of the pandemic on the economy.

This was reiterated by Año, who described barangay lockdowns as a better option.

“Our way forward is we will localize the national action plan through the LGUs. This is being done by Año. He is talking to all LGUs,” Galvez told Duterte during a meeting on the pandemic on May 19. 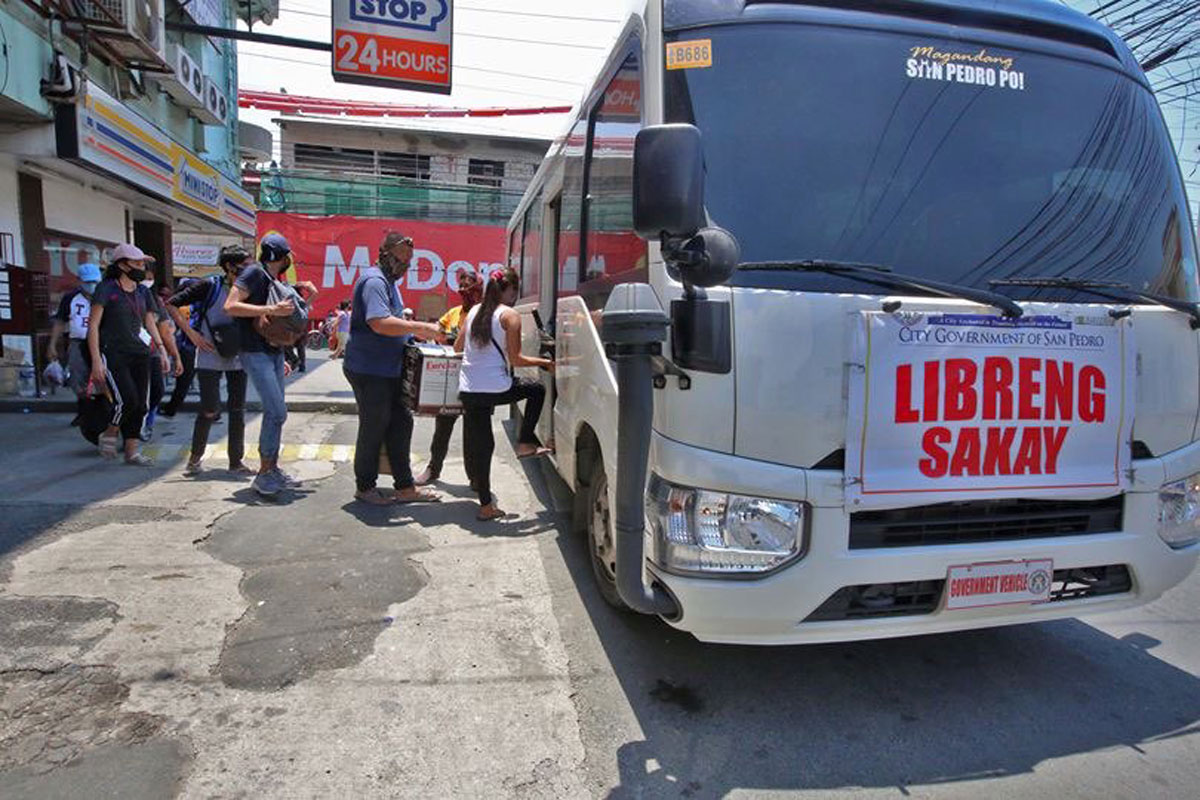 However, officials have reminded the public that health and safety protocols such as police checkpoints will remain in place as long as there is no vaccine for COVID-19.

There are about 4,000 police checkpoints all over the country. Año said the scheme would be modified, transitioning to spot or random checkpoints, to prevent traffic congestion as restrictions are eased.

Roque stressed that people must learn to adjust to a new lifestyle.

“Even if we are under MGCQ or the new normal, social distancing is already part of our life. All activities will have to observe social distancing. Well, the future of these events (and) industries will really depend on our ability to adopt to a new lifestyle,” he said.

The World Health Organization (WHO) also underscored Tuesday the need for people to stay at home, saying the number of newly recorded cases of COVID-19 in the Philippines is “not rapidly decreasing” despite the “strict” implementation of the community quarantine.

According to WHO-Western Pacific Region Office Technical Officer Takeshi Nishijima, “it is very important to stay at home for the public to prevent further spread of the infection.”

“I think we need to be very careful. If we stop staying at home and stop (practicing infection prevention) measures … we might still see … increasing number of new cases,” he noted in a press briefing organized by the Department of Health (DOH).

Nishijima added it is also vital to the fight against COVID-19 to practice “known pharmaceutical interventions like physical distancing, cough etiquette and all those kinds of things.”

“In the Philippines, we are seeing the new number of cases, which kind of stabilized. We are hoping that it will decrease in the future. For that I think we need to be prepared to continue what we do right now,” he stressed.

As of Tuesday, DOH data showed there were 14,669 confirmed COVID-19 cases in the country. The figure includes 886 deaths and 3,412 recoveries.

Under ECQ, people are not allowed to go out except for those exempted. Public transportation is suspended and only essential industries like those involved in healthcare and food production can operate. Some industries are allowed to operate partially in MECQ areas although mass transportation is still prohibited. Public transportation may resume operations in GCQ areas, but at a reduced capacity to observe safe physical distancing. More establishments are allowed to reopen under GCQ, but they should follow health standards and social distancing. 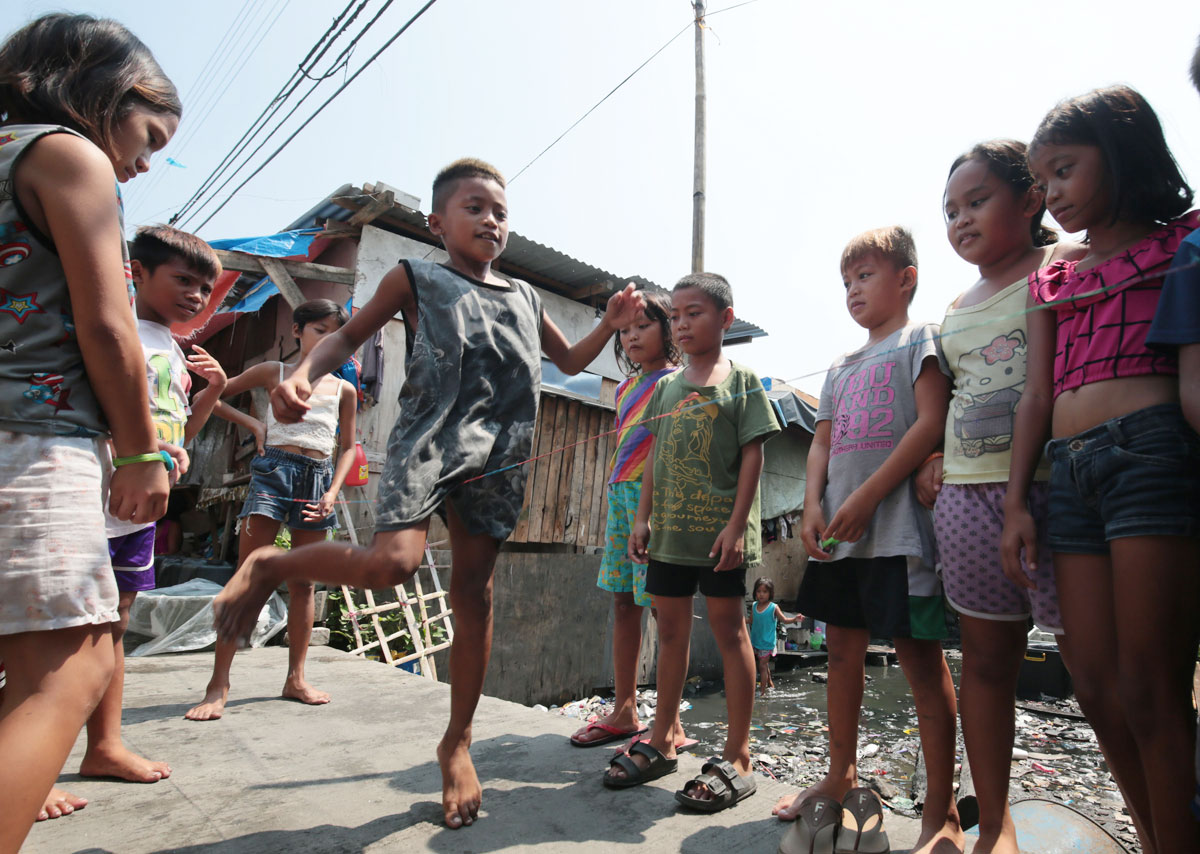 The government issued the guidelines for MGCQ, the most lenient quarantine scenario and the transition phase between the GCQ and the so-called new normal after new quarantine classifications were announced in the middle of this month.

Under a modified GCQ, public masses, movie screenings and dine-in services will be allowed – although abiding with physical distancing and other COVID health protocols.

There are no areas under MGCQ yet. Some areas were earlier placed under MGCQ, but this was recalled due to the lack of guidelines for the quarantine classification.

On Saturday, May 23, the IATF revised the guidelines for MGCQ, under which all persons will already be allowed to go out.

Under MGCQ, limits to the movement of people and the regulation of operating industries will be relaxed. The presence of uniformed personnel to enforce protocols will become less necessary.

Once an area transitions from GCQ to MGCQ, all persons will be allowed outside their houses, although minimum public health standards will still have to be complied with. Public gatherings such as movie screenings, concerts, sporting events and other entertainment activities will be allowed, but participants may fill no more than half of the capacity of the venue. The same rule will apply to religious gatherings, community assemblies and non-essential work gatherings.

Under the more stringent MECQ, only five participants may attend gatherings while 10 people may do so in GCQ areas. Public gatherings are not allowed under the ECQ, the strictest scenario.

These rules make MGCQ practically the only quarantine scenario that allows the holding of public masses. The number of people that can join religious gatherings under the MECQ and GCQ guidelines is so small that participants will be limited to the preacher, his assistants, readers, choir members, and the technical crew of churches that hold online masses.

Classes to resume, but...

Higher educational institutions in MGCQ areas will be allowed to conduct face-to-face classes but should observe health standards and guidelines set by the Commission on Higher Education (CHED). Mass gathering of students will still be prohibited.

For K-12 Basic Education, schools should adopt the learning continuity plan of the Department of Education.

The government recently approved CHED’s recommendation to open schools based on the manner of delivering classes. Higher learning educational institutions using full online education can open any time while those that have adopted flexible learning, which involves the use of both online and face-to-face classes, can start classes in August.

Public and private offices in MGCQ areas will be allowed to deploy all their personnel onsite, but companies should come up with alternative arrangements for persons who are 60 years old and above, those with health risks and pregnant women.

Road, rail, maritime and aviation sectors of public transportation may operate but should abide by the guidelines on capacity to be issued by the Department of Transportation (DOTr). A strict one-meter distance between passengers should be observed.

Private transportation like company shuttles and personal vehicles will also be allowed, subject to the guidelines to be provided by the DOTr. The use of bicycles and other non-motorized transportation will be “strongly encouraged.”

All public and private construction projects will be permitted but should comply with social distancing and safety guidelines.

Industries not permitted under the more stringent quarantine protocols will be allowed to resume operations under MGCQ, but at a reduced capacity.

Barbershops, salons and other personal care service establishments may reopen, but only at half capacity of their venues. The same rule will apply to dine-in service in food retail establishments, and Category 4 industries that are barred from operating under stricter quarantine scenarios.

Individual and group outdoor exercises including non-contact sports like golf, tennis, table tennis and swimming will also be permitted. – With Sheila Crisostomo