Critics say ABS-CBN Corp. and its employees were betrayed as they were made to believe that the network could continue operating pending Congress’ approval of its franchise. 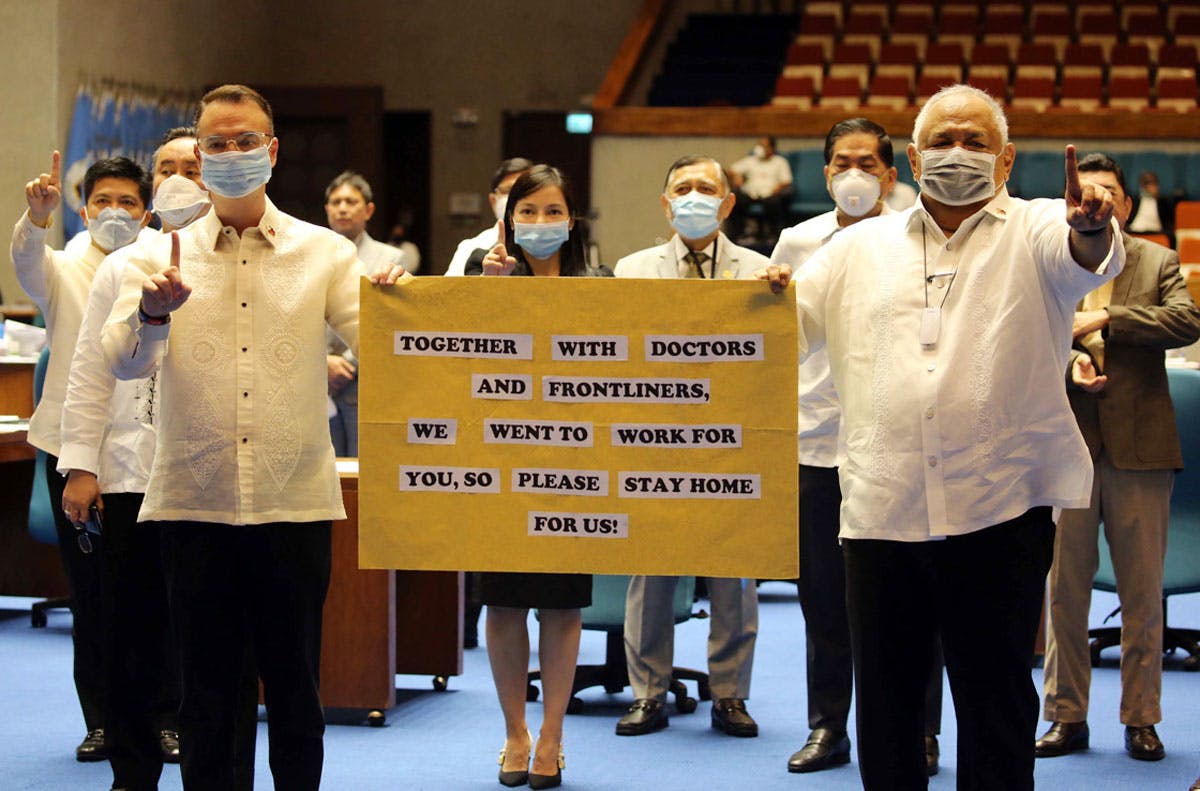 PHOTO OPPORTUNITY: Speaker Alan Peter Cayetano and Executive Secretary Salvador Medialdea pose at the session hall of the House of Representatives on March 23, 2020 while holding the banner that incurred people’s ire for comparing themselves with health workers and other frontliners battling the coronavirus disease 2019 oubtreak. Photo by Boy Santos, The Philippine STAR

As criticisms against the National Telecommunications Commission’s order to shut down ABS-CBN Corp. flared on Wednesday, May 6, Malacañang, the Office of the Solicitor General and the NTC blamed the closure on the House of Representatives’ inaction on the network’s legislative franchise.

The NTC is under the Office of the President while the OSG is an attached agency of the Department of Justice.

Independent congressmen said the House – most especially Speaker Alan Peter Cayetano – should take the blame for sitting on ABS-CBN’s long-pending application for a franchise.

The first version of the franchise bill was filed by Nueva Ecija 2nd District Rep. Micaela Violago way back in November 2016, but the 17th Congress ended without any movement on the bill at the committee level.

ABS-CBN withdrew an application that was filed during the presidency of Benigno Aquino III in September 2014, citing time constraints.

During the start of the 18th Congress in July 2019, Violago immediately refiled the bill. But the legislative franchises committee, chaired by Palawan 1st District Rep. Franz Alvarez (who held the same seat in the previous Congress), conducted its first hearing only on March 10 – shortly before Congress went on recess.

Atienza urged the Speaker to “do our job and reflect,” knowing Cayetano as a prayerful and devout Christian.

“Whether or not the franchise would be approved, at least you should have acted on it and did not just sit on it,” Atienza said.

“Huwag kang mambola. You tackled a lot of franchises but you didn’t even take up ABS-CBN’s,” Atienza said.

Lagman shared this opinion, reiterating his earlier warning that ABS-CBN could continue operating only if Congress approved its franchise prior to the expiration on May 4.

“The NTC must not be used as the scapegoat for the patent failure of the leadership of the House of Representatives to resolutely push for the seasonable renewal of ABS-CBN’s franchise,” Lagman stressed in a statement on Wednesday.

Read more: Can ABS-CBN get a new franchise in 24 days?

The veteran lawmaker believed that Cayetano and NTC Commissioner Gamaliel Cordoba were “playing charades” after the NTC issued the order despite an earlier commitment to allow the network’s operations after the expiration of its franchise.

Lagman reiterated his stance that the Supreme Court, in its Feb. 17, 2013 decision on Associated Communications & Wireless Services versus National Telecommunications Commission, stated that radio stations could not operate without obtaining a franchise first. Hence, he disagreed with Cayetano’s proposal that the NTC grant provisional authority to ABS-CBN pending the approval of its franchise.

“The closure of the network giant, which could have been averted by the timely congressional renewal of its franchise, is a flagrant derogation of the freedom of the press,” Lagman said.

“There is no other solution to the dilemma of ABS-CBN than the immediate renewal of its franchise now that the Congress is in session,” Lagman added. 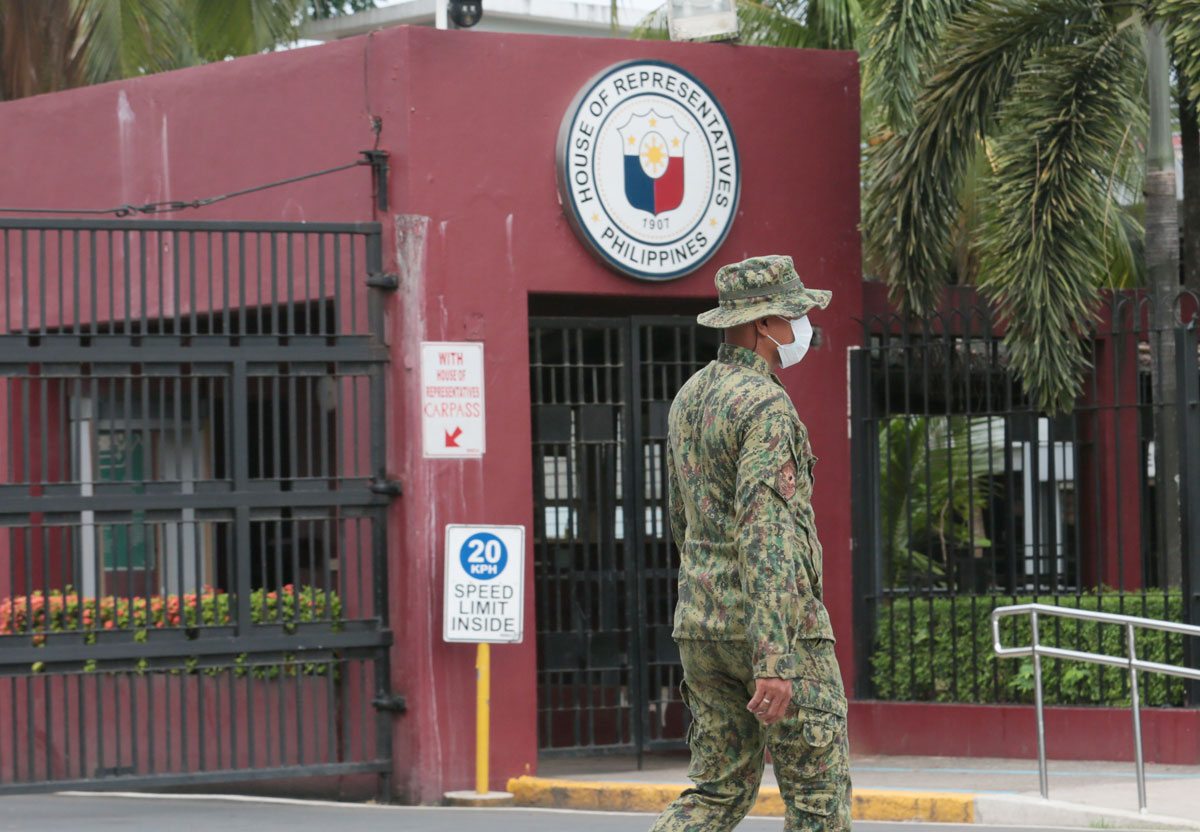 But ranking members of the super majority in the Lower House did not agree and defended their leader, pinning the blame instead on the NTC.

Deputy Speaker Aurelio Gonzales Jr. and ways and means committee chairman Joey Salceda said the regulatory body should have fulfilled its commitment during a congressional hearing last March, that it would not shut down the network after May 4 considering the communications from Congress authorizing the network to continue operating.

“The letter coming from the House and the Senate resolution directing the NTC to issue a provisional authority to ABS-CBN may be used as an authoritative instruction coming from institutions mandated by law to issue such legislative franchise to broadcasting companies,” Gonzales explained in a statement.

Salceda agreed, saying the NTC should not have abandoned its commitment.

“The NTC action should serve as a warning to Congress that if we do not do our job, the Executive will do it for us: step into any existential void, fill in any power gap, guided only by its own narrow worldview of what constitutes national interest,” Salceda lamented.

Last week, Salceda assured the public in a radio interview that ABS-CBN would not go off-air upon expiration of the franchise, citing NTC’s commitment, and that there was no move to shut it down.

Lagman said “the shuttering of ABC-CBN highlights the verity that the House must exercise its constitutional powers independently and without succumbing to the President’s intervention.”

Solicitor General Jose Calida, who warned on Sunday that the NTC officials could face graft charges if they would not shut down ABS-CBN despite expiration of its franchise, said it was Congress that did not act on the network’s application. 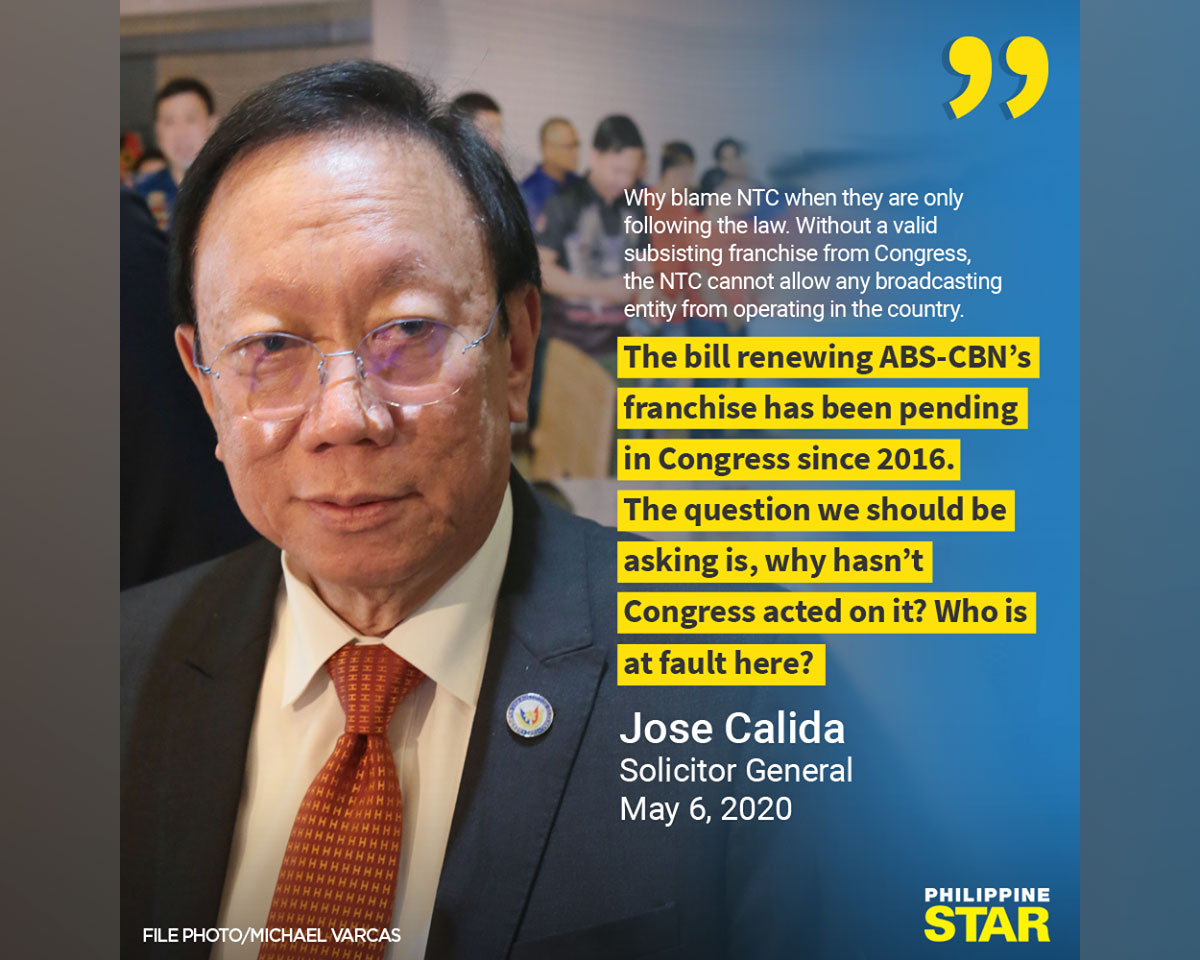 Palace officials also defended President Duterte on Wednesday after some groups accused the Chief Executive of having a hand in the closure of ABS-CBN due to his grudge against it for alleged unfair practices.

After speaking to the President for about 20 minutes on Tuesday night, Roque said Duterte stressed that he had been neutral on the issue, having accepted the public apology of ABS-CBN a few months ago.

“And I think that would also indicate that if it reaches his desk, for as long as there is no constitutional infirmity, then he will not object to the law,” Roque said over CNN Philippines, referring to the franchise measure.

Panelo shared the view that the task of renewing the franchise is within the powers of Congress. “You are barking up the wrong tree.  This is a law that needs to be followed,” Panelo said.

Panelo also rejected claims that the moves of the administration were reminiscent of the late dictator Ferdinand Marcos’ actions to oppress the media during martial law.

Marcos ordered the closure of ABS-CBN when he declared martial in 1972.

“When martial law was declared, the president (had) the power to close all telecommunications. In this particular chapter of history, (Duterte) does not have that power.  Congress has the power,” Panelo said.

Roque said the President has urged the lawmakers to put the ABS-CBN franchise to a conscience vote, adding the President would not take it against any lawmaker if the franchise bill would be passed.

According to Roque, the President has no authority to extend or even delay the renewal of a TV network’s franchise because such power is vested first on the House, and then the Senate.

Roque maintained that Duterte “did not intervene” or side with either Calida or Justice Secretary Menardo Guevarra, who have “diametrically opposed views on the matter.”

“But he is the chief implementer of the law, and he would be committing a crime if he were to grant the franchise that he has no power to grant; and he will also be violating the law if he were to influence the decision of a quasi-judicial body,” Roque said, referring to the President.

Guevarra, however, said Duterte could override the NTC, since it is an agency under the Office of the President.

Roque argued that “the issue is whether or not the NTC can be compelled as Congress wants to issue a provisional franchise.”

“We’ve examined the law in this regard, and the NTC is a quasi-judicial body” that is attached to the Department of Information and Communications Technology only for purposes of policies and programs, Roque said.

He maintained that NTC decisions cannot be reviewed by the Office of the President.”

“They can only be reviewed by our courts… either the Court of Appeals or the Supreme Court,” Roque stressed. “I think that makes it very clear, that there is no way that the President could influence a decision of a quasi-judicial body. Now in law, this is known as the doctrine of primary jurisdiction. In specialized matters such as on the issue of broadcast franchises, we leave it to those with specialized competence to deal with the matter.”

In its order, NTC cited a section of Republic Act No. 3846, titled "An Act Providing For The Regulation Of Public And Radio Communications In The Philippines And For Other Purposes," which states that, "No person, firm, company, association, or corporation shall construct, install, establish, or operate a radio transmitting station, or a radio receiving station used for commercial purposes, or a radio broadcasting station, without having first obtained a franchise therefor from the Congress of the Philippines."

Cabarios said the resolutions of lawmakers allowing ABS-CBN to continue operating pending its franchise renewal bid in Congress are not laws on which a provisional authority could be anchored.

While NTC officials gave Congress their commitment last March to grant ABS-CBN a provisional authority, he said the subsequent assessment by the regulatory agency's legal team led to a decision to issue its order against ABS-CBN based on the argument it cited. 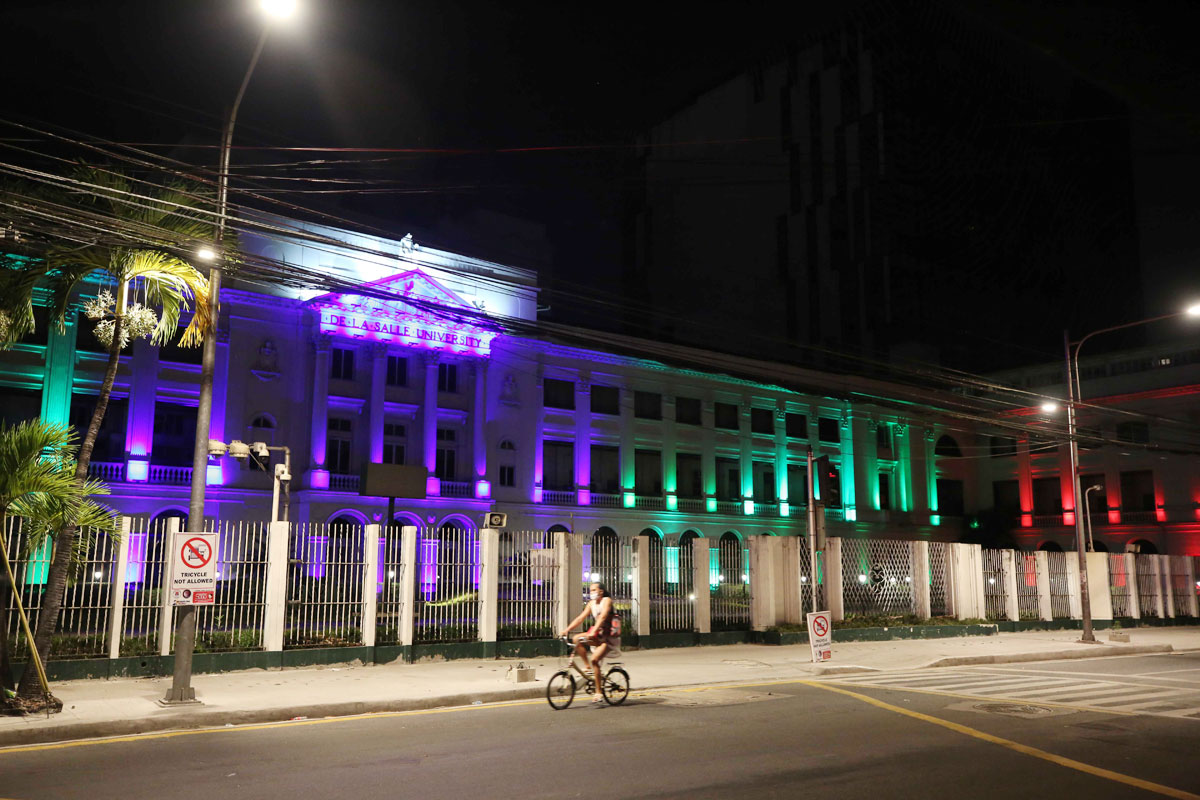 Approval in one week

Atienza and Salceda pushed for the immediate hearing on ABS-CBN’s franchise after the NTC took back its commitment to allow the network to continue operating while its application is pending.

Both said the House could approve the franchise renewal application in just one week, if there would be support from the leadership of the chamber.

“In truth, we can actually approve the franchise in just one day if we really wanted to. But if we need to debate, we can have the vote in one week, and we are certain that we will win,” Atienza said in an interview.

Salceda agreed, saying that the panel was actually preparing for the hearings until the NTC “preempted” the calendar and issued the cease and desist order.

“We are predisposed to approve the franchise renewal. We can hear and approve it in one week,” Salceda said in a separate interview.

“Our timelines for tackling ABS-CBN’s franchise changed because the country’s priorities changed, but it does not mean we are abandoning the discussion,” he said.

Salceda stressed the need to address the issue now. He cited a study his team conducted, showing that the ABS-CBN shutdown could lead to 2,600 new coronavirus disease 2019 (COVID-19) infections due to increase in social interactions by over 15 million viewers of the network.

The ways and means committee chairman, however, admitted that the matter would be a “distraction” to Congress, which is supposed to be focused on COVID-19 measures.

“Considering that Congress is busy with much pressing matters, such as coming up with an economic recovery plan to protect jobs and families, this is a distraction,” Salceda lamented. “Let’s not rock the boat when the waves are tough, especially when all of us are in that boat.”

Another proponent of the franchise renewal bill, Cagayan de Oro Rep. Rufus Rodriguez said the House may opt to grant a provisional franchise to ABS-CBN.

Rodriguez, who chairs the committee on constitutional amendments, filed on Wednesday a joint congressional resolution granting a provisional franchise to the network, valid until the end of the 18th Congress on June 30, 2022.

“Now the remedy is for the House to speed up its hearings on my proposals for a temporary franchise and for the grant of a new 25-year broadcasting service privilege,” Rodriguez said.

He also proposed that any new franchise granted by Congress should include an express provision authorizing the NTC to provisionally allow a franchisee with an expired franchise and a renewal application pending with the House to continue operating until its application is approved or rejected.

The former law dean believes that the matter might not be addressed immediately if brought before the courts.

“Filing cases in court or appealing the NTC order before the Office of the President will be utterly useless because the battle is now with Congress,” Rodriguez told The Philippine STAR.