Is Cha-cha Back On The Agenda? New CORE Movement Launched

What gives? The Department of the Interior and Local Government, the House committee on constitutional amendments and a new movement called Constitutional Reform or CORE won’t give up on Charter change. 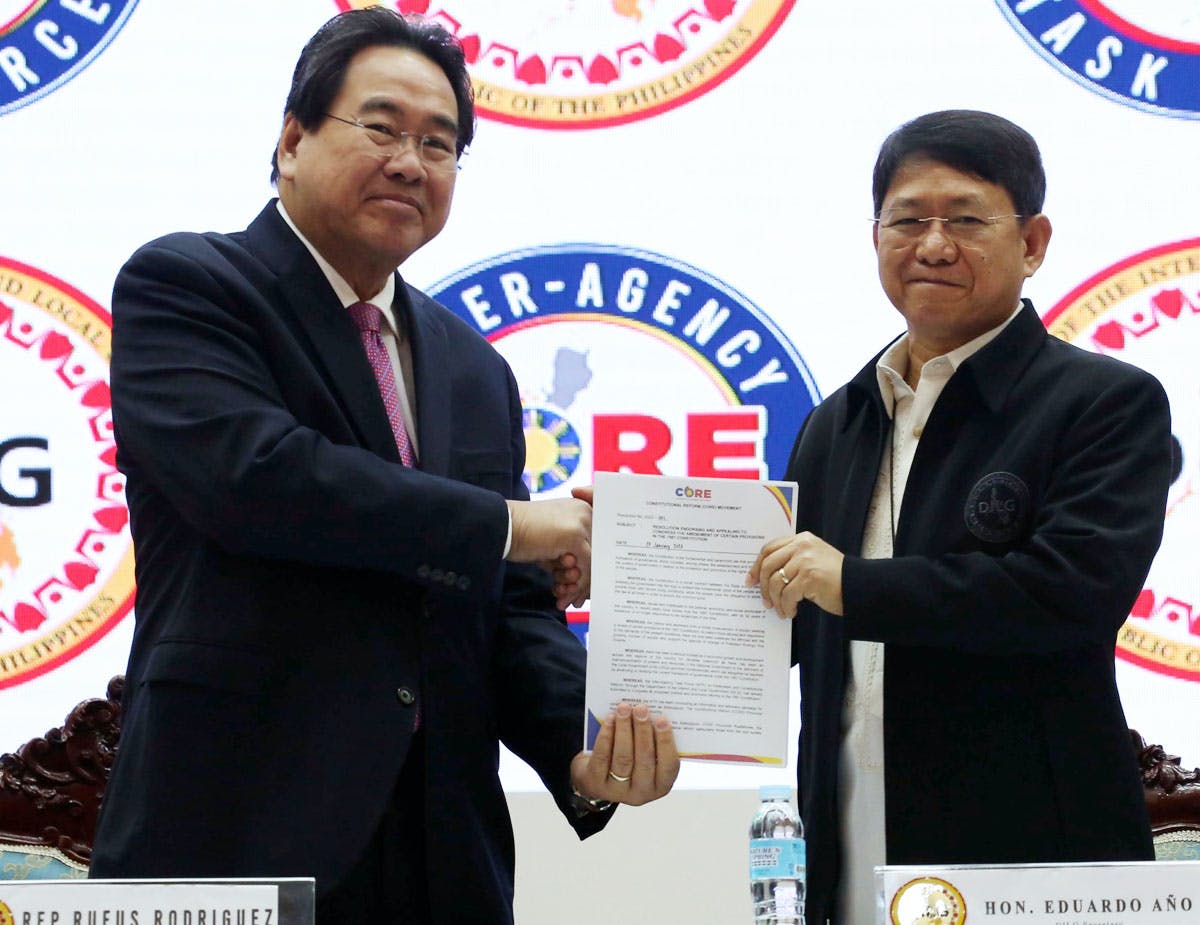 The Department of the Interior and Local Government (DILG), the House committee on constitutional amendments and a new group called Constitutional Reform or CORE Movement are at the forefront of breathing life into the agenda of Charter change.

CORE Movement was launched yesterday at the Philippine National Police (PNP) headquarters at Camp Crame in Quezon City, coinciding with the DILG’s updates on its operations in areas affected by Taal Volcano’s continuing unrest.

With the various problems besetting the country, including Taal Volcano’s unrest that has displaced hundreds of thousands of residents, why is this being pushed at this time?

Also, President Duterte, who rose to power with the promise to push for federalism, made no mention of amending the 1987 Constitution in his State of the Nation Address in July last year.

During yesterday’s launching, the CORE Movement’s head, former Masbate governor Vicente Homer Revil declared the group’s firm belief in Duterte’s call for “basic reforms in our society,” which could “take effect through amendments of the social, political, economic and electoral provisions of the 1987 Constitution.”

“We believe that endemic social ills like corruption and the massive poverty in our regions (are) due to the strong legal and economic provisions in the 1987 Constitution that preserve the control over the electoral system by corrupt politicians and their cooperation with greedy oligarchs who control our economy with their control of our politicians and the justice system,” Revil said.

Año said the Inter-Agency Task Force on Federalism and Constitutional Reform and the DILG would intensify their information and education campaign so Filipinos could learn more about the need for constitutional reforms “in our desire to bring about and propel changes in the government and our society.”

In response, Rodriguez said he would back the efforts of the CORE Movement for broader reforms in the country’s Constitution. “I fully support the call for real reforms, as enunciated by President Duterte since the 2016 elections,” Rodriguez said.

“Real reforms are needed to improve the country’s economic, political and social system and make our Constitution more responsive to our people’s needs in the future,” Rodriguez added.

Revil said the CORE Movement would promote constitutional reforms as an urgent public concern that must be approved by Congress and submitted to a plebiscite before the 2022 national and local elections. 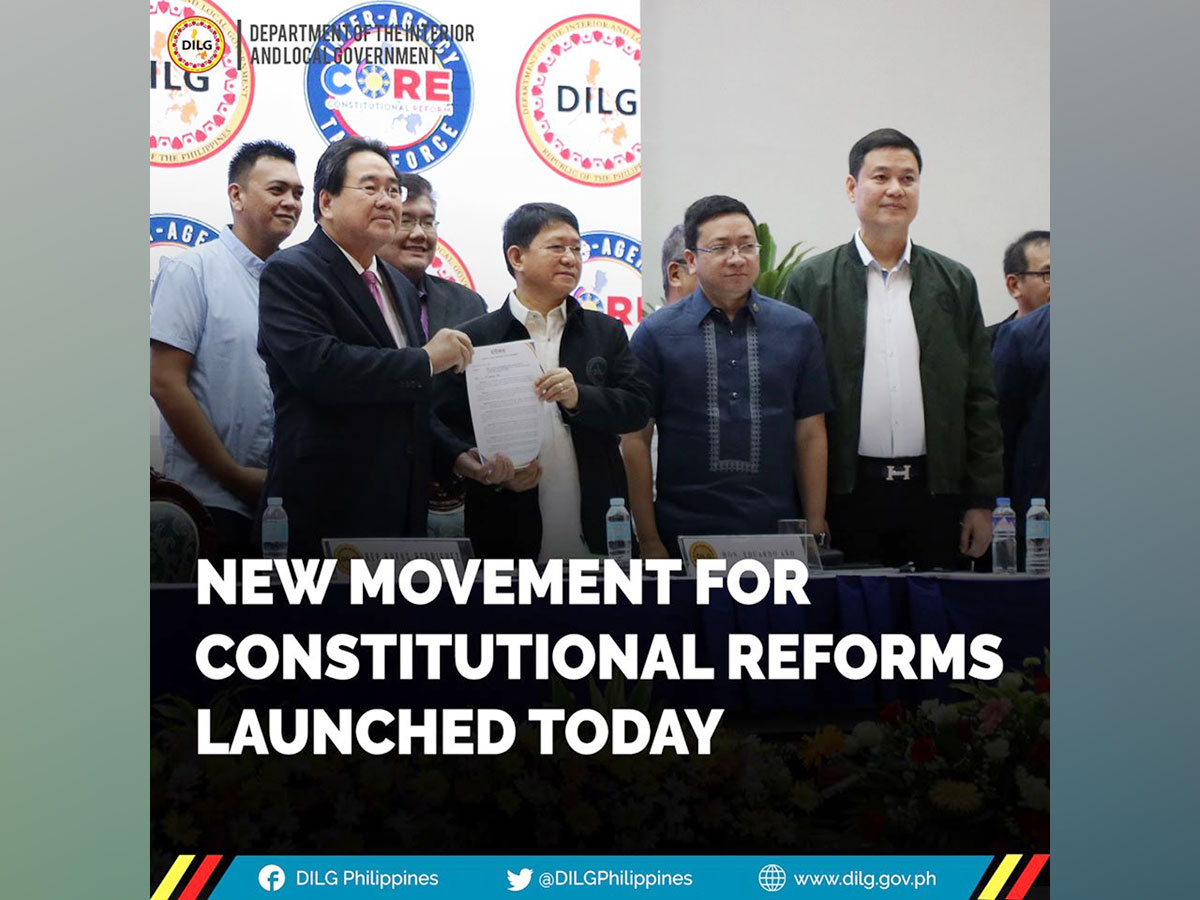 Revil is a consultant of the DILG’s Center for Federalism and Constitutional Reform. He turned over to Rodriguez, who chairs the House committee on constitutional amendments, their resolution calling on Congress to convene a constituent assembly and approve their proposed amendments.

The group says it has visited 62 provinces and is seeking to gather at least one million signatures to back the Charter change efforts.

“We started last October but we are going to continue until this year,” Revil said in a news briefing.

Today, the House committee on constitutional amendments chaired by Rodriguez is set to hear a briefing by the Interagency Task Force on Federalism and Constitutional Reform on its proposals.

This step taken by the House committee comes a month after the task force submitted its proposed constitutional amendments covering political and electoral reforms.

But it remains unclear if the committee will focus on federalism or overhauling the structure of government.

Federalism aims to turn regions into self-governing entities with their own legislatures and judiciaries and with exclusive powers over certain functions, mostly economic. Critics fear that this will only strengthen the hold of local elites as they gain their own fiefdoms.

The task force has not yet submitted its recommendations directly relating to federalism, three months after the DILG said there was “no consensus yet” regarding the system of government.

Professor Ramon Casiple, a task force member, added that in the House briefing, “federalism may be discussed, but (it is) not an urgent or immediate agenda.”

“It will focus on specific economic and political amendments considered immediate and popular,” Casiple told The Philippine STAR in a text message.

In a phone interview with The STAR, Malaya said the task force wants to go beyond the political and economic provisions that have mostly been the focus of the congressmen who filed their respective resolutions seeking to amend the Constitution. 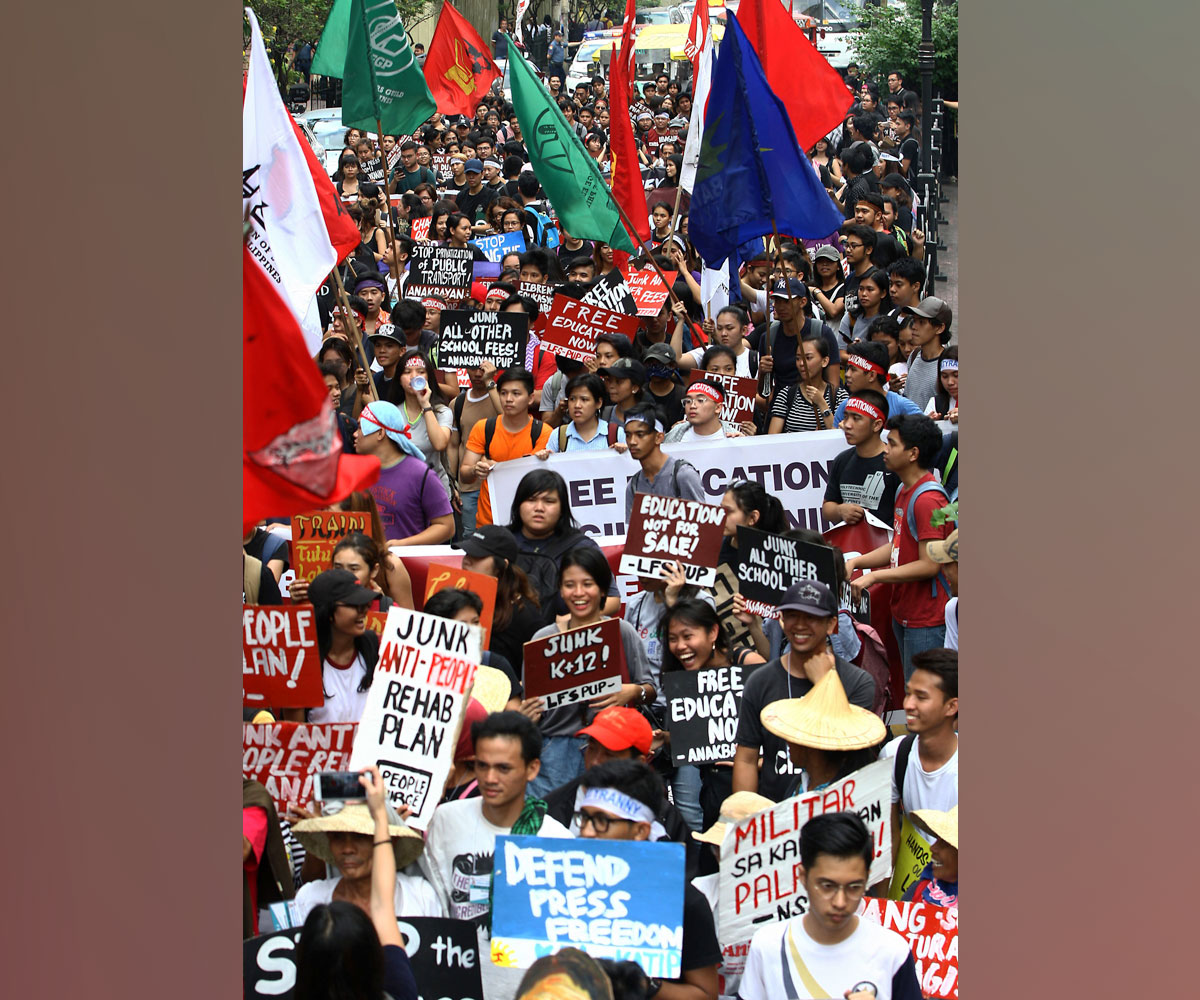 Of the seven resolutions filed in the House, only Resolution of Both Houses No. 1, authored by Deputy Speaker and Pampanga 3rd District Rep. Aurelio Gonzales, outlined a proposed federal system of government in which the country would be divided into nine federated regions plus the special entities of Bangsamoro and the Federated Cordillera Region.

The other resolutions mostly sought greater power for Congress to amend the Constitution’s economic provisions through ordinary legislation, supposedly to make changes easier in the hopes of attracting more investments. (See another version filed by Gonzales, as well as the versions filed by Rodriguez, and Reps. Manuel Cabochan III, Lord Allan Jay Velasco, Teodorico Haresco, Jr. and Lorenz Defensor.)

For its part, the task force submitted the following recommendations for political reforms: the strengthening of political parties, the prohibition of turncoatism (balimbing), campaign finance reform and the extension of the terms of local government officials to five years with one reelection.

The task force also sought to make the constitutional prohibition against political dynasties self-executing. This is to address the pitfall of the current constitutional provision requiring Congress to pass an enabling law against dynasty building – a herculean task given that many of its members belong to entrenched dynasties.

The task force likewise wanted to upgrade the Regional Development Councils provided under the Constitution into Regional Development Authorities that would have their own funds and would be empowered to decide regional issues instead of being mere recommendatory bodies.

It further sought a greater share of national revenue for local government units through an amendment of the internal revenue allotment mechanism.

Asked if these amendments strengthening local governments were proposed under the premise that the government would stick to the unitary system – a strong central government to which regional and provincial units are subordinate – Malaya said yes.

Malaya explained that even if federalism would be a secondary focus for now, the task force wants to take advantage of the House hearing to introduce smaller piecemeal amendments to the Constitution’s economic provisions.

For his part, Revil said Congress should approve the ban on

turncoatism or the switching of political party membership of elected officials after every election because the practice “has kept the political largesse system permanent and established corruption as a source of strengthening political power in our country.”

Like the task force, Revil said that the CORE Movement would seek to lobby Congress to pass electoral reforms that will prohibit political dynasties and impose tough rules on political parties by requiring them to ensure they have membership among ordinary voters.

The CORE Movement will also campaign for the amendment of the Constitution’s economic provisions so that more capital for new industries can be sourced, by opening all or certain industries currently limited by the 1987 Constitution to Filipino investors to foreigners, according to Revil.

“We deserve freedom from oligarchs who keep control of our national and regional economies through limited investments in our industries. We need more capital and innovation to create more jobs and boost our economy, especially in the regions where most poor Filipinos live,” he said. 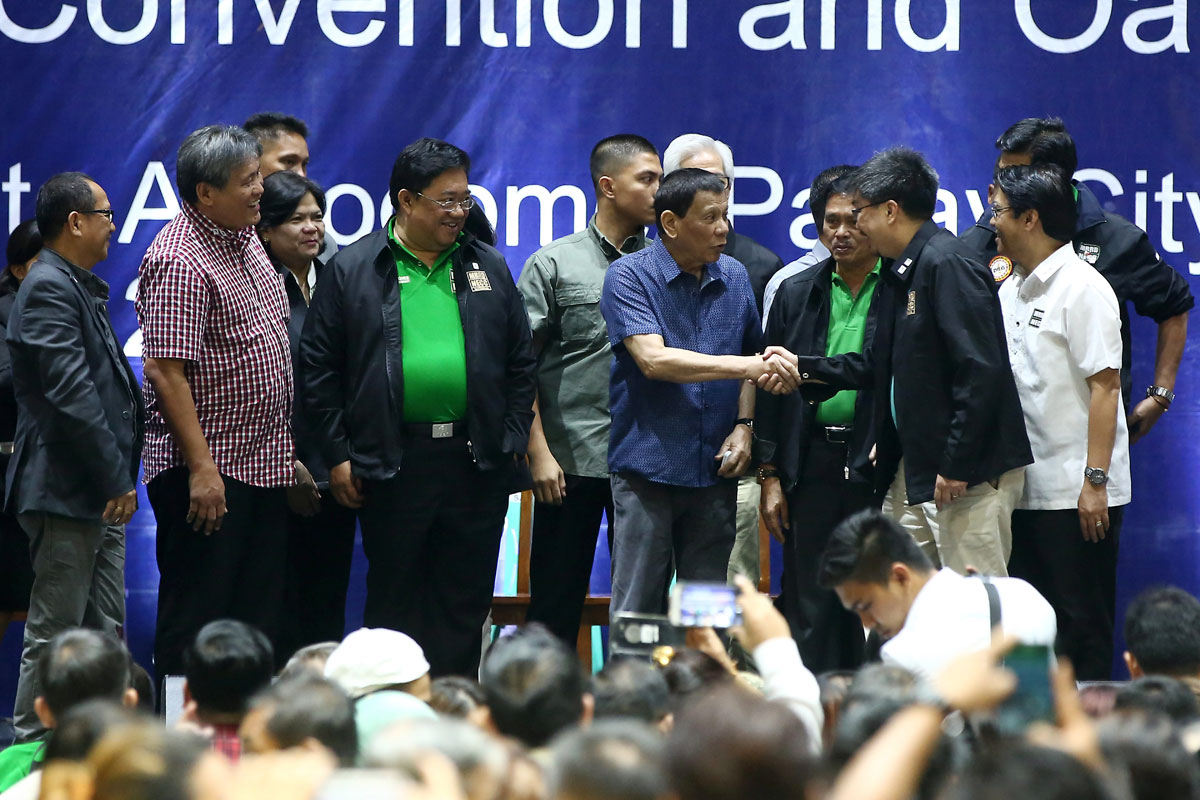 The task force, highlighting federalism in its very name, was relaunched by the DILG in October, more than two months after Duterte delivered his SONA that was silent on his erstwhile advocacy.

Even if Duterte’s support seemed to have gone lukewarm, Malaya said there was no directive from the President to turn their backs on the federalism project.

“Until and unless the President revokes the memorandum circular (creating the task force), we proceed,” Malaya said.

“Kami mismo (We ourselves) on our own, we realize the 1987 Constitution, after 30 years, should already accept some changes…even if the President does not say it,” he added.

As for the House, Rodriguez told The Star earlier this month that the committee would not just look into the recommendations of the task force. 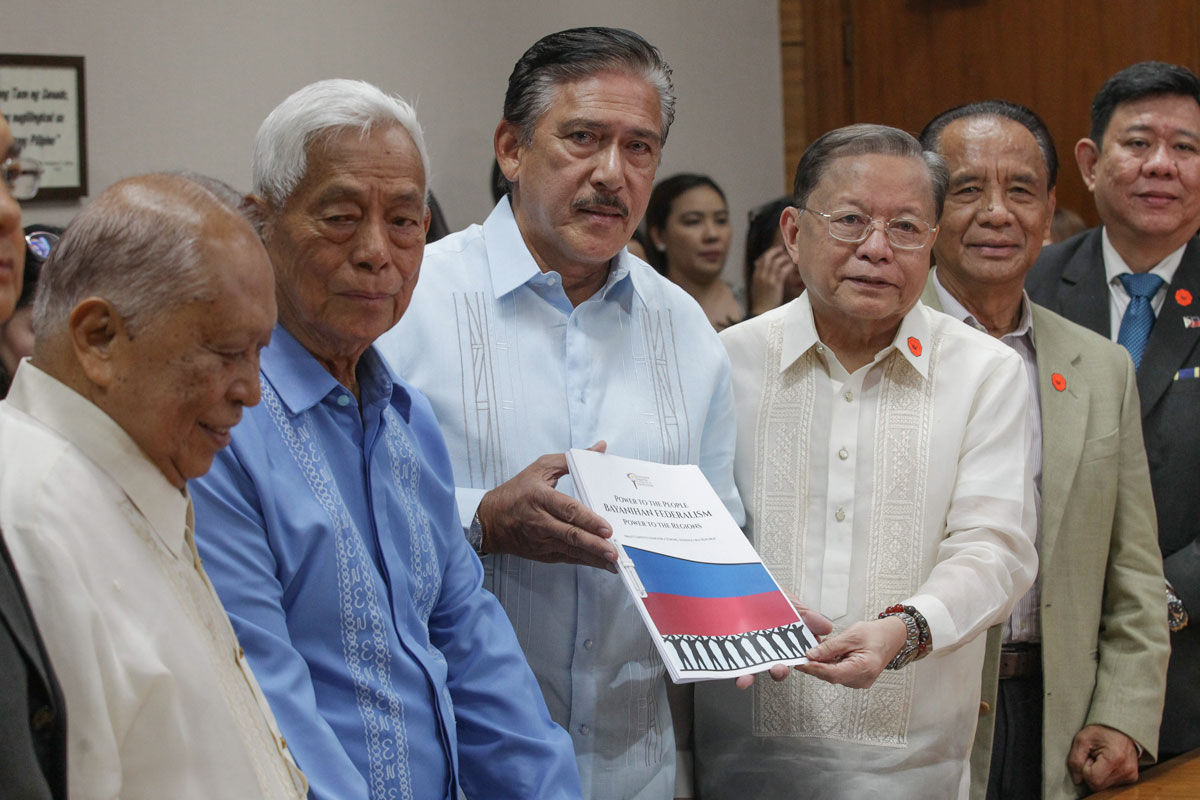 Rodriguez claimed in November that his committee’s public consultations showed there was still overwhelming support for federalism even if Duterte seemed to have dropped the idea.

Showing that the House had not abandoned its desire to change the Constitution, the committee held a closed-door executive meeting on Dec. 11 in which it discreetly approved small but substantial amendments: empowering Congress to ease constitutional restrictions on foreign investments through ordinary legislation, and extending the terms of the next batch of House members and local government unit officials to five years from the current three.

The House committee also passed a proposed resolution asking the Senate and the House to convene a constituent assembly to consider constitutional amendments for submission in a plebiscite before the 2022 elections.

The Senate has stood firm in its opposition to such moves, to the point that the DILG itself had to issue a statement calling on the chamber to hold hearings. 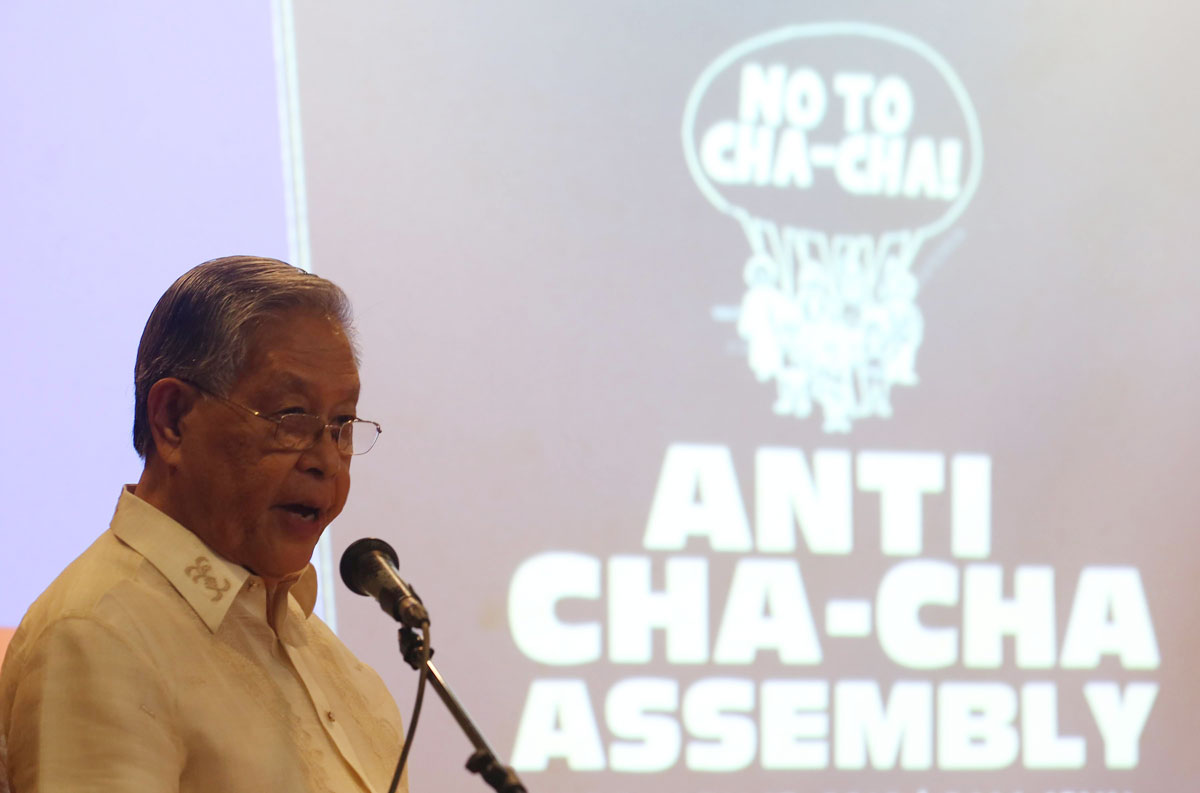