‘Brigada Pagbasa’ Launched To Ensure Every Filipino Can Read, Is Literate

The Philippines’ current literacy rate is high but the World Vision Development Foundation and the Department of Education say no Filipino should be left behind in terms of reading and comprehension especially at this time. 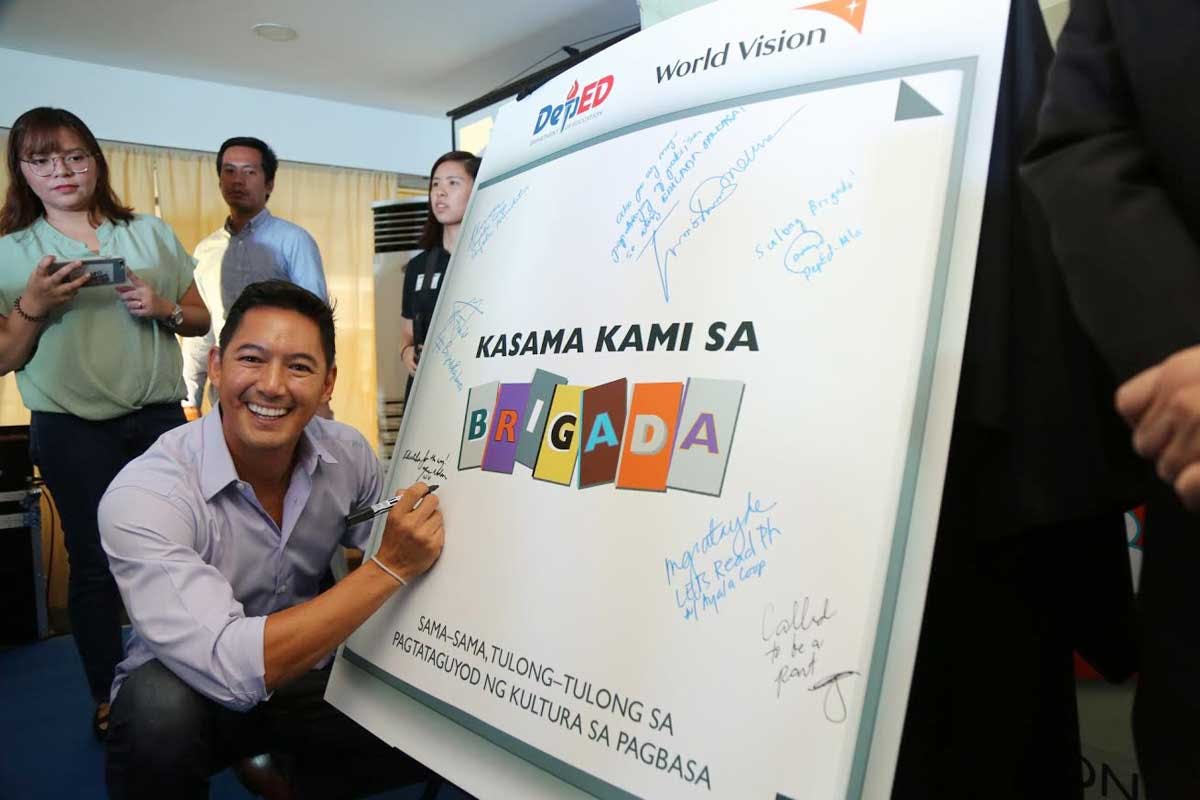 In the 2016 United Nations Human Development Report, basic literacy rate among Filipinos was recorded at 97.95 percent, next to Singapore, Brunei and Indonesia.

But while the current figures considerably high, the remaining gap of about two percent cannot be put aside.

This is according to World Vision Development Foundation and the Department of Education (DepEd), which launched Brigada Pagbasa yesterday to ensure that every Filipino could read and become literate.

Brigada Pagbasa is a movement that also seeks to enhance the skills of Filipino children who can read and improve their comprehension. It is an offshoot of Brigada Eskwela — an annual schools maintenance activity initiated by DepEd and done nationwide with the help of various sectors and individuals who volunteer to do the work, including repairs and cleanup.

Yesterday’s launching brought together experts, change makers, policymakers and other stakeholders across all sectors to form collaborations and synergize efforts and resources for the project. 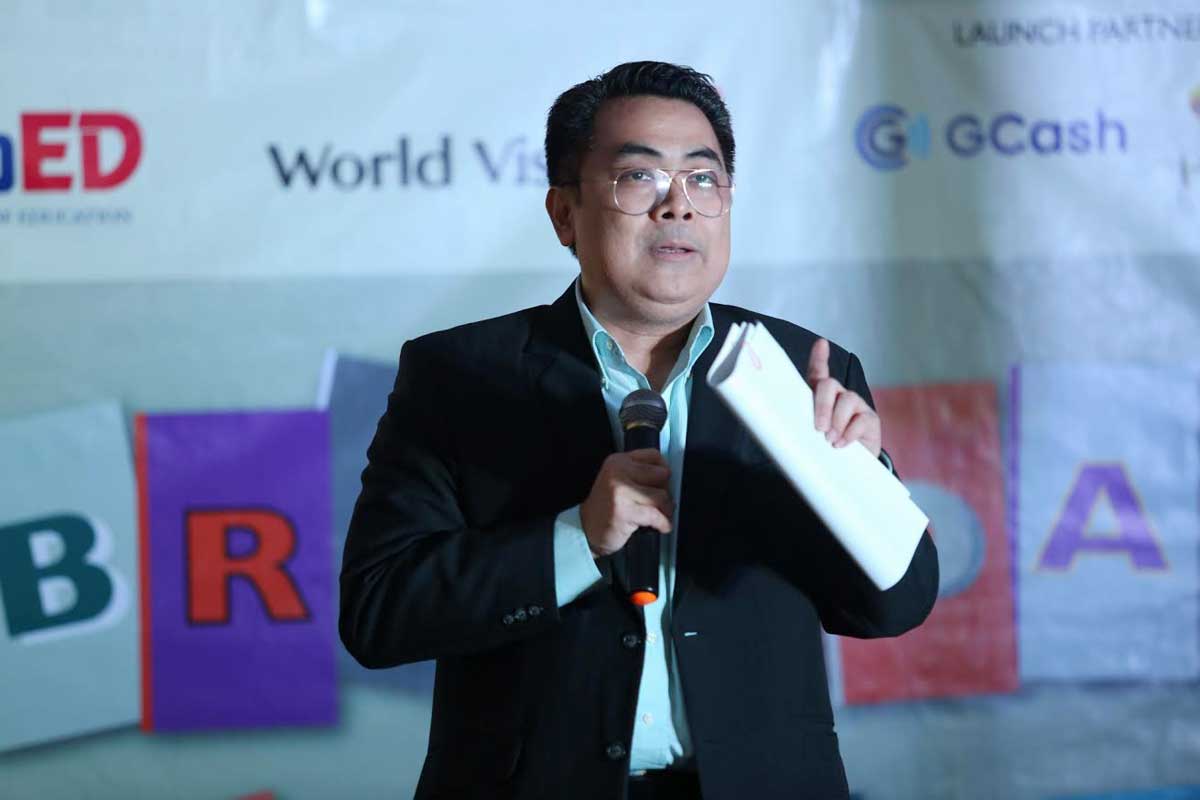 Umali stressed no child should be left behind in terms of reading and comprehension. He explained the DepEd policy that started during the past administration was that every Filipino child must be able to read by first grade and be functionally literate by Grade 3.

Umali said there must be interventions implemented to reach the small percentage of Filipinos who could not read, both young and old, and Brigada Pagbasa would be one of them.

He conceded there were some students who managed to reach secondary schools without even knowing how to read but this kind of situation is being addressed through remediation.

According to Rommel Fuerte, executive director of World Vision Philippines, it was DepEd Secretary Leonor Briones who “birthed” the idea of having Brigada Pagbasa and talks about the project began on March 20, 2019.

“Who can say no to an idea such as this?” Fuerte said, adding a lot of organizations had expressed willingness to be part of the movement. 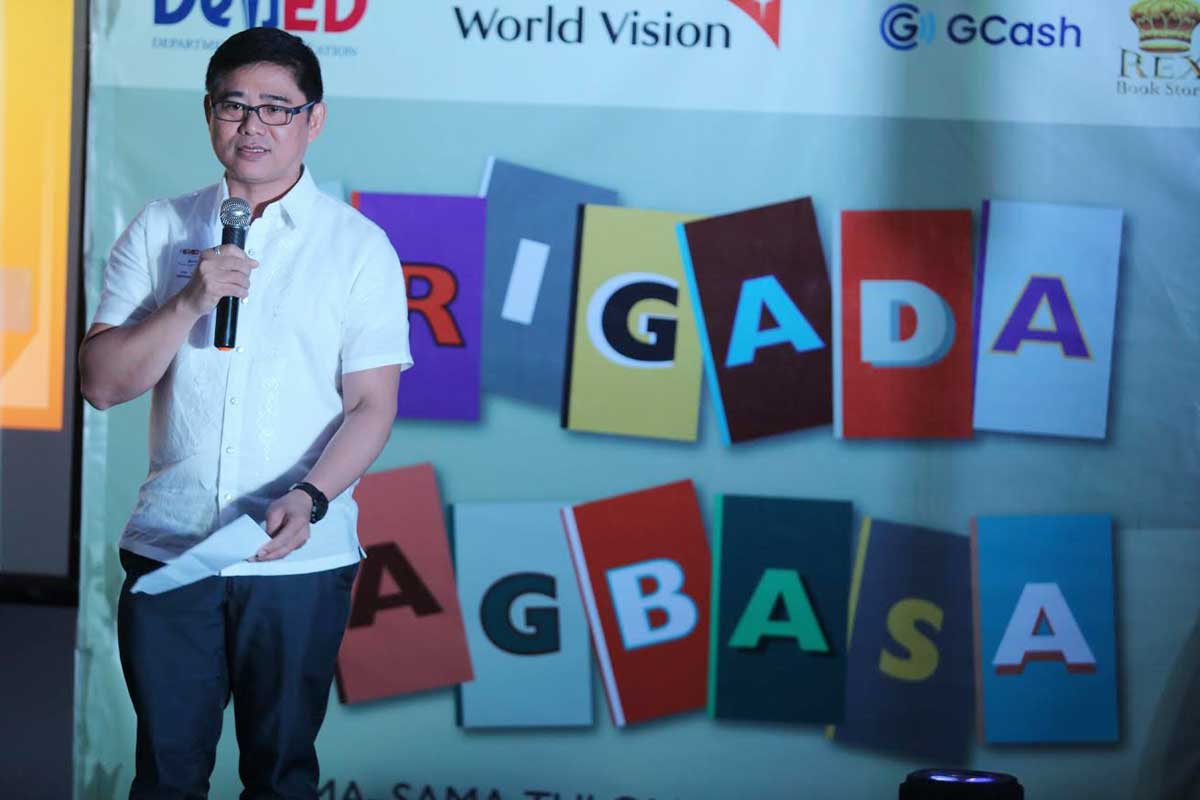 Fuerte disclosed the program would be implemented through individuals and groups from various sectors who could volunteer to do reading sessions with children.

Fuerte said the reading sessions could be done in schools and communities or “purok centers” or other means to be carried out by those who would be part of the program.

The Manila Police District, for example, started its mobile library in October last year to encourage street children to read and study rather than be idle or get involved in criminal activities. Its members were present during the launch yesterday and were among those who signed the commitment to support the project. 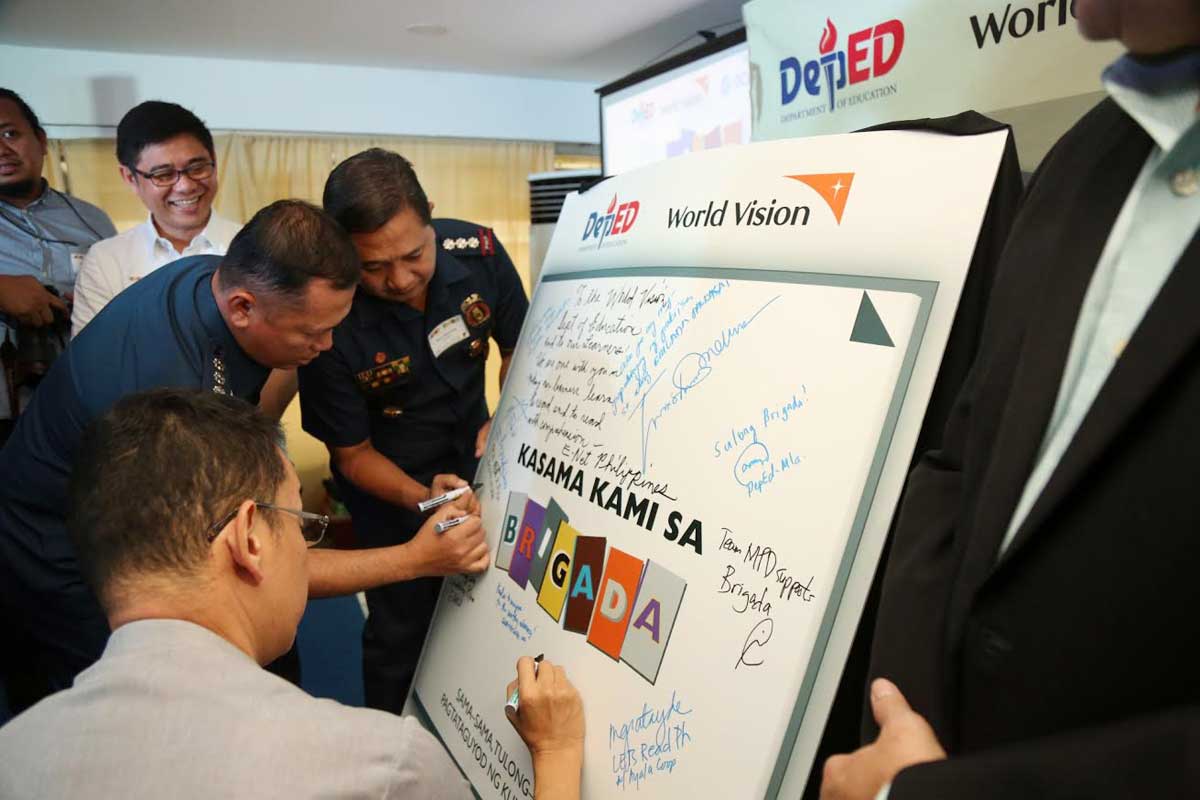 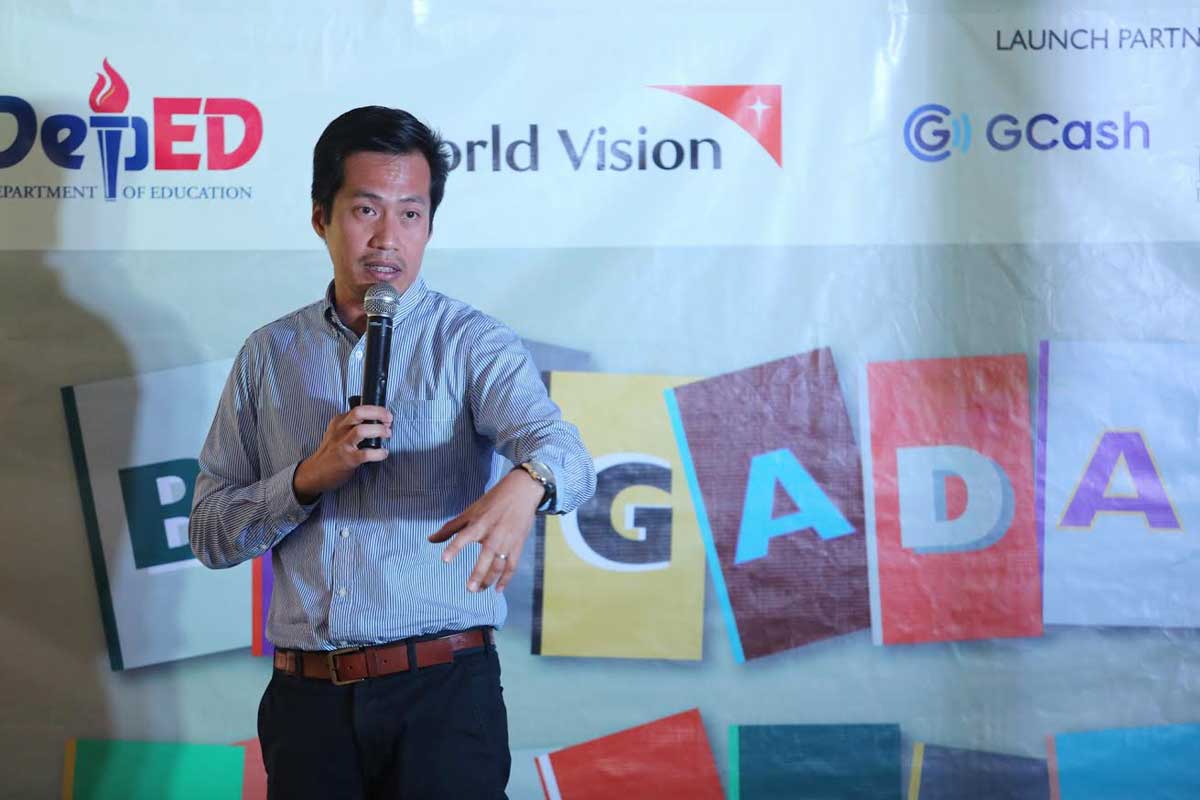 The project was launched in celebration of the National Literacy Month this September and in preparation for the National Reading Month in November.

Other partners of World Vision and DepEd are the National Library of the Philippines, National Book Development Board and E-Net Philippines. They also tapped television and radio personality Joyce Pring to be the ambassador for Brigada Pagbasa.

“Literacy, most especially among the children and youth, is one of the key factors that determines how well a country progresses in this rapidly-changing world,” Fuerte, who himself attested he was given a chance to improve his lot through education despite being poor, said.

“To become literate is an important component in the development of children, especially in this fast-paced, technology-driven age. Brigada Pagbasa aims to unleash the potential in every child,” Fuerte added.

Fuerte emphasized that the campaign will run continuously until every Filipino receives an opportunity to be educated and to develop his or her full potential.

By 2030, the Philippines must ensure that all youth and a substantial proportion of adults, both men and women, have achieved literacy and numeracy based on the fourth Sustainable Development Goal the country needs to achieve along with every member country of the UN.

It is one of the many global goals set by the UN General Assembly back in 2015 to address global challenges.

Over the years, World Vision said the Philippines has consistently made a significant stride in its functional literacy rate. Functional literacy, as defined by the National Statistics Authority is the level of literacy which includes not only reading and writing but also numeracy skills that would help people cope with the daily demands of life. Based on the 2013 Functional Literacy, Education and Mass Media Survey (FLEMMS), the country registered a 90.3 percent rate, which means that nine out of every 10 Filipinos aged 10 to 64 were functionally literate, World Vision said in an article on its website posted on Jan. 24, 2019.

While the national rating showed an improvement from the 86.4 percent in 2008 and 84.1 percent in 2003, there still seemed to be gaps at the community level. World Vision conducted a baseline study in Siayan, Zamboanga del Norte in the same year the FLEMMS was published. Results showed that the proportion of girls and boys aged 11 to13 that are functionally literate was at a critical rate of 44 percent, which means that below 50 percent of the students were able to read with comprehension by the end of their basic education. The municipality of Siayan is part of the Zamboanga Peninsula which had a functional literacy rate of 87.5 percent in the FLEMMS result.

Contributory to low functional literacy is the high rate of school dropouts, according to World Vision.The survey further revealed that one in every 100 or about four million Filipino children and youth was out-of-school in 2013. Of the total number, 22.9 percent got married, 19.2 precent lacked family income to be sent to school and 19.1 percent lacked interest in attending schools.

“These figures, including a series of consultations with partners and stakeholders, allowed World Vision to revisit its education programs in the Philippines.  The organization, in the past years, has been investing more on hardware interventions such as provision of supplies and materials, construction and repairs of classrooms,” World Vision’s education manager Geomel Jetonzo, who is also now Brigada Pagbasa project manager, said.

While such intervention was helpful, the organization realized that there was not much soft interventions that could help directly translate to quality learning outcomes. Hence, issues on low functional literacy for school-aged children became a priority in World Vision's new country strategy. This was also in alignment with the Philippine government’s plan of action.

World Vision, which serves all people, regardless of religion, race, ethnicity or gender, is a global Christian relief, development and advocacy organization dedicated to working with children, families and communities to overcome poverty and injustice. A global force, it was founded in the 1950s by Bob Pierce and is the largest non-profit organization in the Philippines, helping 1.5 million children every year with the support of volunteers, sponsors an donors.

Those who wish to volunteer or be a partner may contact World Vision and DepEd through External Partnerships Service.