Without Vaccines For COVID-19, Duterte Rejects Shift To MGCQ

President Duterte said during a Cabinet meeting on Monday night that he “cannot in conscience allow” the shift to modified general community quarantine and the holding of face-to-face classes without COVID-19 vaccines. 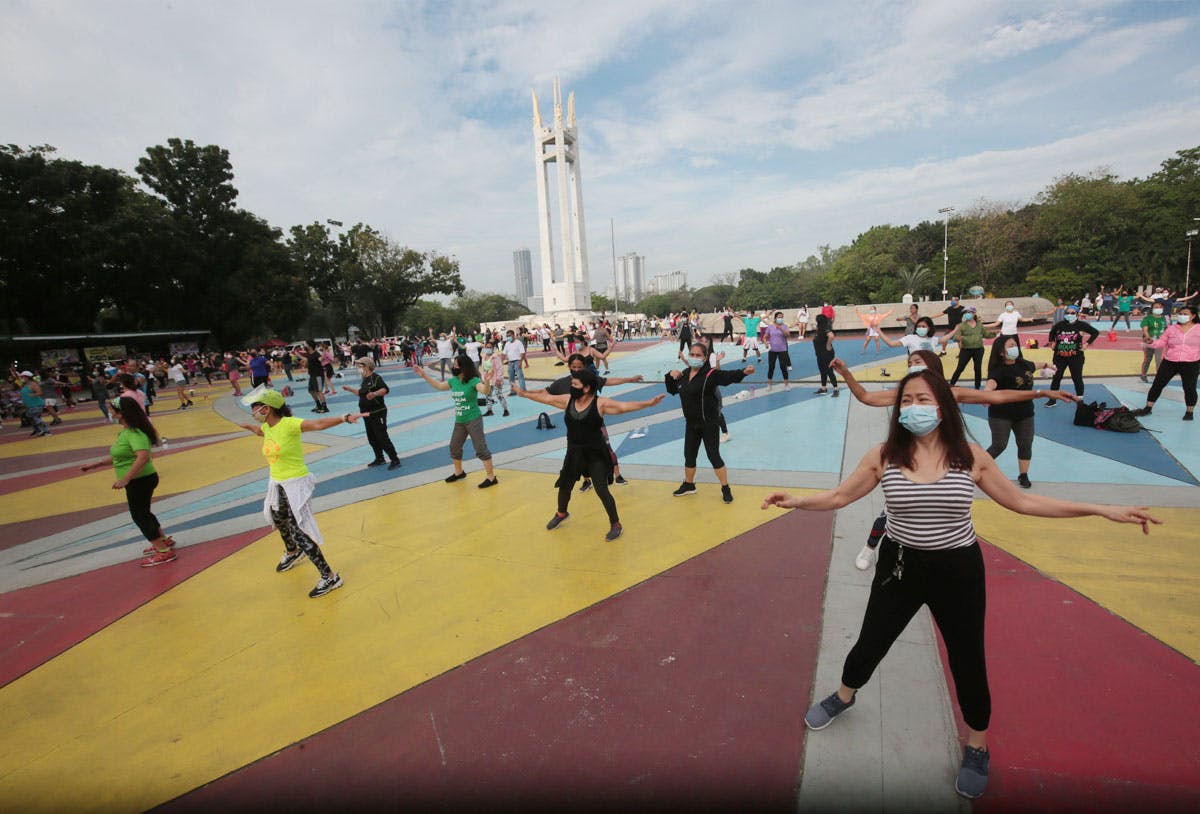 People wear face masks and maintain distance to protect themselves from COVID-19 as they join a Zumba session at the Quezon City Memorial Circle on Feb. 21, 2021. Photo by Michael Varcas, The Philippine STAR

President Duterte will not allow the country to shift to modified general community quarantine (MGCQ) until after the government starts its rollout of the COVID-19 mass vaccination program, presidential spokesman Harry Roque and Sen. Christopher “Bong” Go announced on Monday night, Feb. 22.

Roque said the President gave his directive to the Cabinet that the Philippines would not be placed under MGCQ “unless there is a rollout of vaccines" for coronavirus disease 2019 or COVID-19.

"The Chief Executive recognizes the importance of reopening the economy and its impact on people's livelihoods. However, the President gives higher premium to public health and safety," he added.

Duterte presided the Cabinet meeting at Malacañang convened for the purpose of making a final decision on whether or not to ease the quarantine restrictions that the shift to the MGCQ.

According to Go, Duterte found the implementation of MGCQ is not “in the best interest of the country.”

The President also told Education Secretary Leonor Briones that the country is not ready for face-to-face classes, he said.

“(I) cannot in conscience allow these things to happen (MGCQ and face-to-face classes) and something might get wrong,” Go quoted Duterte as telling Cabinet officials.

Duterte expressed confidence that economic managers as well as the Filipinos in general will understand the situation.

Go earlier asked that vaccinations start first before relaxing further community quarantine restrictions in the Metro Manila and the rest of the country.

“For me, personally, vaccinations first. Vaccine rollout before you open up the economy,” Go said in an interview after personally attending the groundbreaking ceremony of the Northeastern Misamis General Hospital in Villanueva, Misamis Oriental on Friday, Feb. 19.

He said the situation in the country remains “perilous” without the implementation of the vaccination program.

Earlier on Monday, Roque and Health Secretary Francisco Duque III said the government is ready for the possible easing of quarantine restrictions in Metro Manila and other parts of the country because there are available health facilities for people who would get sick with COVID-19.

The National Economic Development Authority and the Metro Manila mayors recommended to downgrade the status of the capital region from general community quarantine (GCQ) to MGCQ.

While economic managers believe it's about time to further reopen the economy to address income and job losses, some health experts are worried that loosening the restrictions would increase the number of COVID-19 cases.

Roque, however, said the recommendation to place the entire Philippines under MGCQ was carefully studied.

"It's true that the number of cases may rise but it is also true that we are ready for it. We imposed a lockdown last March, and it's almost a year since we did so,  to improve our health sector and to treat those who are sick," Roque said in press briefing.

"We shut down the economy not for the heck of it; it was to prepare our health sector to attend to the sick because most of them are asymptomatic at mild," he added.

Roque pointed out 62 percent of intensive care unit beds, 68 percent of ward beds, and 79 percent of ventilators remain available. He also noted that the vaccination program is about to start and is expected to prioritize economic frontliners and the poor. 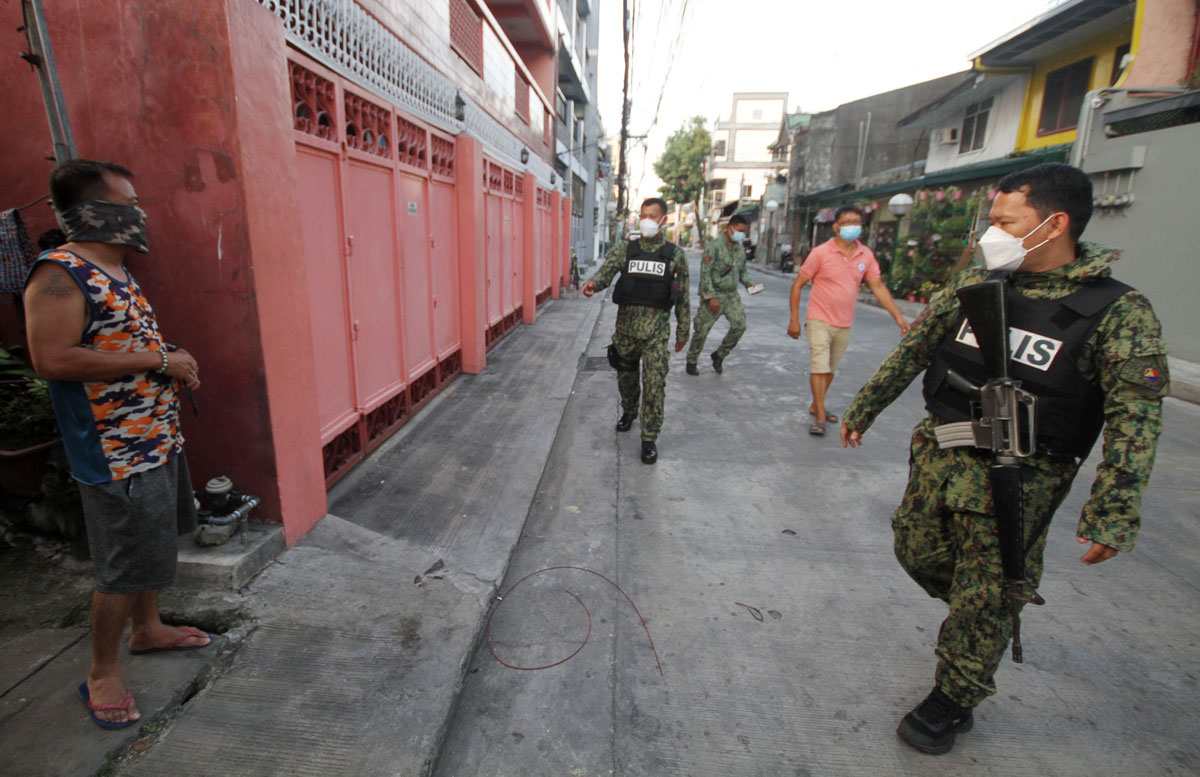 "We also saw how the Filipinos observed the wearing of masks, washing of hands, and physical distancing. That's why there was a recommendation to reopen 95 percent of our economy because many are going hungry," the Palace spokesman said.

"While we expect an increase (in the number of infections) not all of them will be serious cases...We will consider the number of people who are hungry because many sectors of the economy remain closed," he added.

Roque quoted Duterte as saying: "Steady muna tayo (Let's keep it steady for now)," but was not sure if the President was talking about the relaxing of quarantine restrictions or the holding of in-person classes.

Roque said the Inter-Agency Task Force for the Management of Emerging Infectious Diseases can only make recommendations to Duterte and that the President would have the final say on the matter.

The President was supposed to announce his decision in a public address on Wednesday.

Duque, for his part,  said the Philippines is ready to  shift to MGCQ despite the rise in COVID-19 cases and detection of “mutations of concerns.”

According to Duque,  the “five pillars of COVID-19 response” are already in place and the local government units (LGUs) are now more  adept at implementing them when needed to.

“I think we are ready.  I can say that because after one year we have managed to keep our infection rate manageable. When I say manageable, it is at a level that has not overwhelmed the health care system,” he said in an interview with CNN Philippines.

Duque, however, refused to “second guess” what Duterte would announce  during the Cabinet meeting.

The health chief said the LGUs are now able to “more effectively implement localized or granular lockdown” in an area that is reporting high cases of COVID-19.

“Moving forward, we really have to depend more and more on effective localized or granular lockdowns because as the economic development cluster has been saying, if we continue on a high level of community quarantine, then the damage to economy might be irreversible,” he added.

The expected spike in COVID-19 cases, however, did not happen.

Duque said the LGUs have “somehow reached  the level of mastery, agility and effectiveness in bringing down their cases in select barangays.”

Duque added that in the event Duterte decides to shift to MGCQ, it would be “like a stress test for the system that is in place.”

“If we can actually bring down the surge,” Duque said the system is “pretty much stable” and “we really are towards risk mitigation rather than risk aversion.”

He added risk mitigation pertains to the goal of keeping the infection rates low.

“When the infection rate is low, the chances for mutation are also low.   This is what we have been telling the LGUs.  There is no room for complacency,” Duque maintained.  – With Sheila Crisostomo