Amid the proliferation of fake news and lopsided discourses about martial law, an instructor at the University of the Philippines in Diliman suggests a list of books to get a nuanced understanding of martial law and the Marcos dictatorship 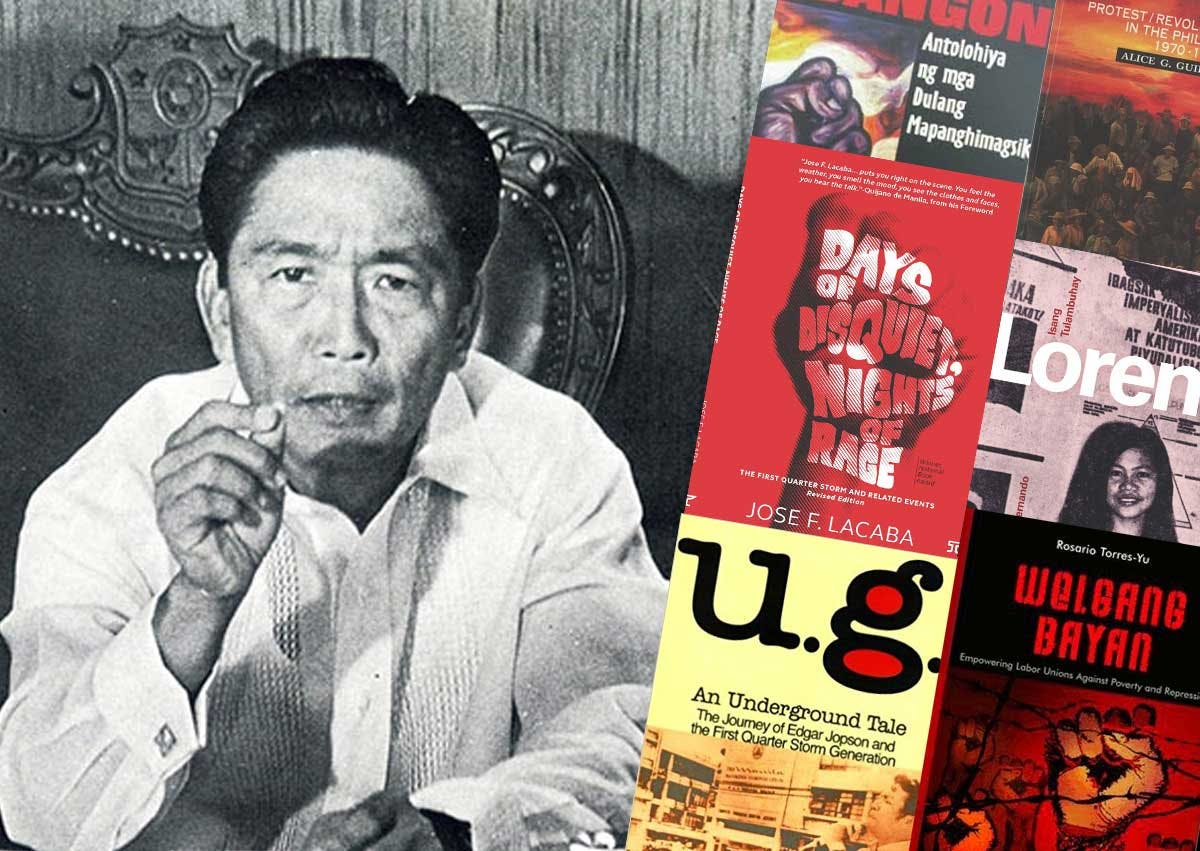 Photo shows the dictator Ferdinand Marcos, announcing on TV on the evening of Sept. 23, 1972 that he has imposed martial law throughout the country to “save the republic from a communist takeover” and to “create a new society from its current state of political decay.” Photo from the Official Gazette of the Republic of the Philippines

While only University of the Philippines students may enroll in the three-unit general education subject titled Philippine Studies (PS) 21 – Wika, Kultura at Panitikan sa Ilalim ng Batas Militar – by next semester, Filipinos interested in the subject may also get a crash course.

How? Through these six books recommended by Karlo Mongaya, an instructor at the Departamento ng Filipino at Panitikan ng Pilipinas under the UP College of Arts and Letters, who is set to teach the subject.

Mongaya said the new subject is just one of the ways that the UP system is trying to fight back “lopsided discourses” and fake news on what really transpired during the martial law era.

But he maintained that learning the language and culture that became instruments to reinforce or resist dictatorial rule should not be confined within the four walls of the classroom but should be made available for all Filipinos.

“Historical works show us the sequence of events and related political, economic and cultural facts. But how did they think, feel or behave within the constraints of martial law? Literary texts broadly conceived can help us understand the forms of consciousness and human behavior of this period,” he said.

While not directly about martial law, Mongaya said this book provides a feel of the issues that galvanized the radical youth who will subsequently form the core of the underground movement during martial law.

2. U.G. An Underground Tale: The Journey of Edgar Jopson and the First Quarter Storm Generation by Benjamin Pimentel

According to Mongaya, this book tells the story of how a generation was pushed to embrace revolutionary options as the corrupt and brutal martial law regime eliminated all legal avenues for pushing social change.

This one presents the life and poetic works of one of the pioneering figures of the Filipino women’s liberation movement whose colorful life was cut short by the dictatorship. 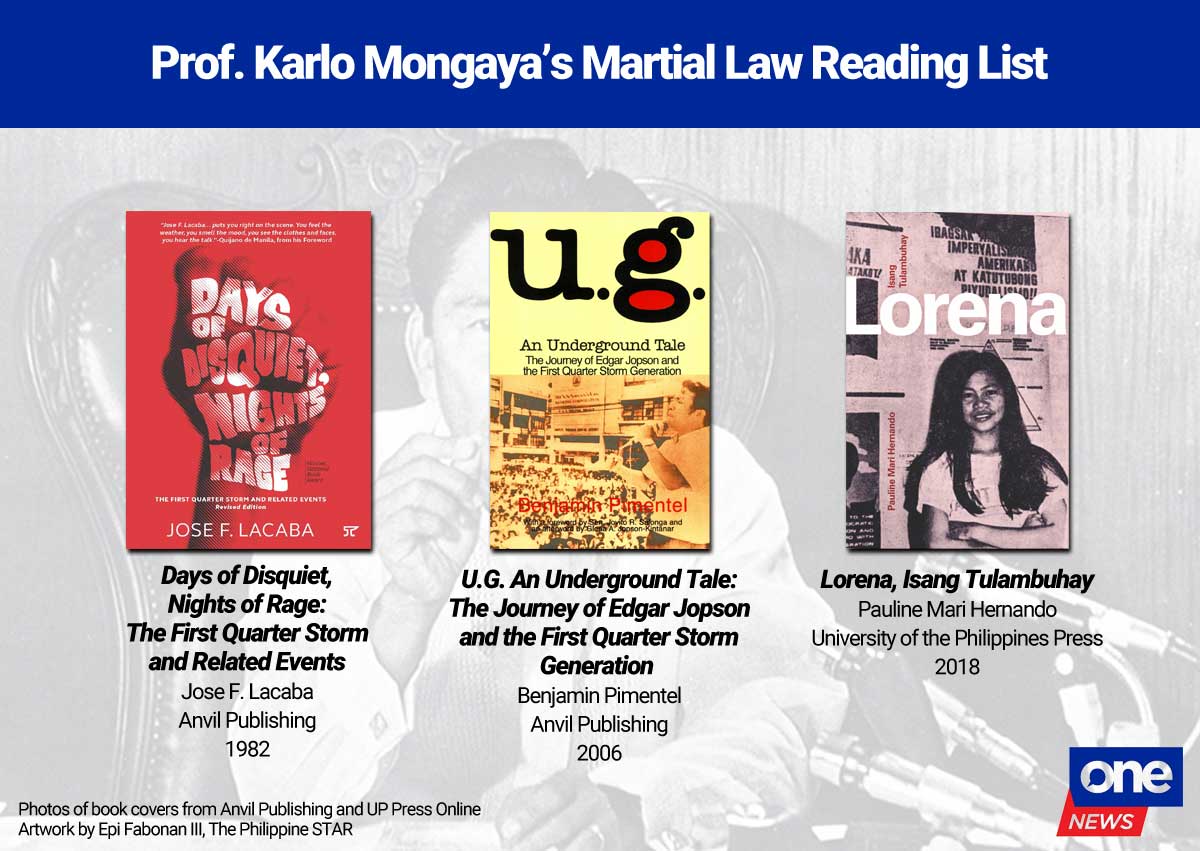 Mongaya says this book is not really about the welgang bayan, but it gives a comprehensive social investigation and class analysis of the rise of the militant labor movement despite repression under the Marcos regime.

This one gathers together some of the classic repertoire of protest and street theater during martial law.

6. Protest/Revolutionary Art in the Philippines 1970-1990 by Alice Guillermo

The book provides a sweeping account of the social realist art that sought to depict the plight and struggles of workers, farmers, urban poor, indigenous peoples and other marginalized sectors during the dictatorship. 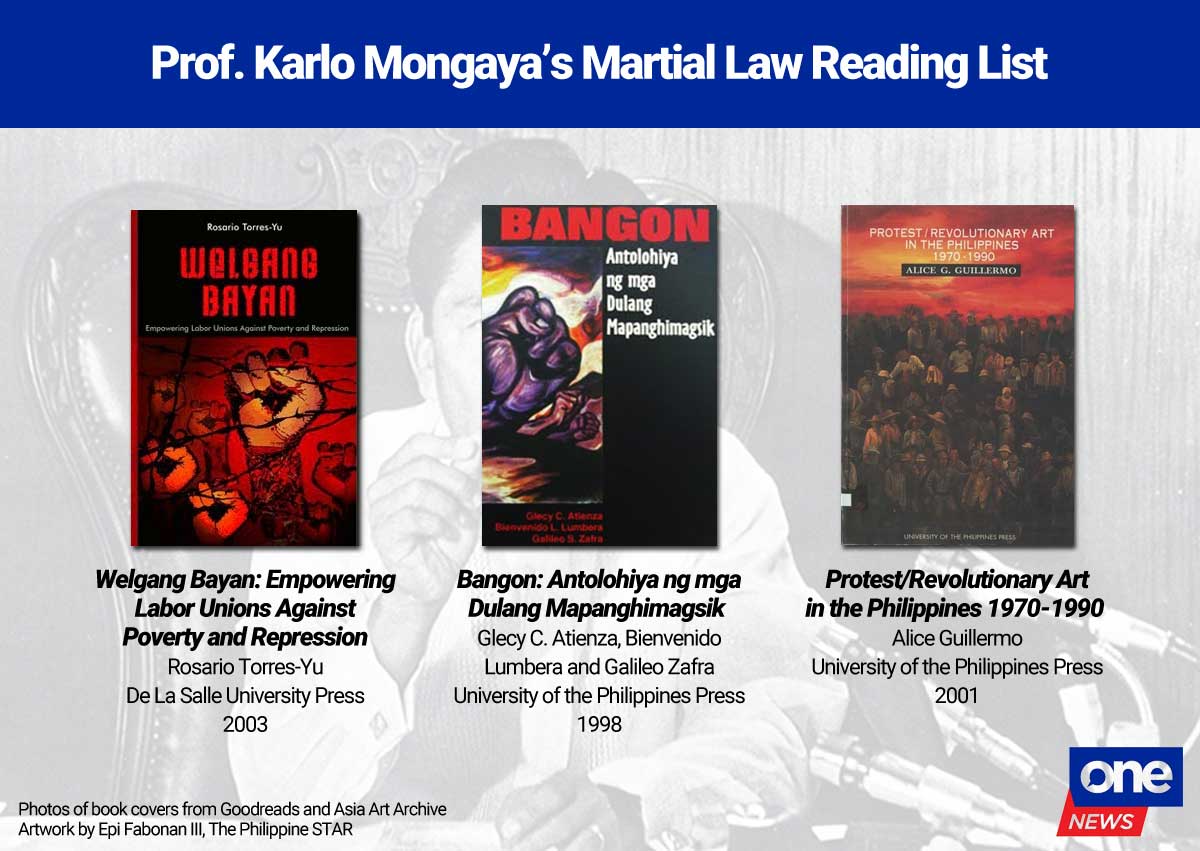 Mongaya said both the Lacaba and Pimentel books were recently reprinted and are readily available from Anvil Publishing Inc.

Meanwhile, the books by Hernando, Torres-Yu and Guillermo are published by the UP Press.

While already out of print, the Ang Bangon anthology is still available at the Popular Bookstore along Tomas Morato Street in Quezon City.

The course, lauded even by Malacañang, is still awaiting endorsement from the Office of the President of UP. It will be offered at UP Diliman this second semester and possibly in other UP campuses soon.

Presidential spokesman Salvador Panelo told a press briefing on Sept. 16 that the martial law subject “is good… if it’s a subject matter every student should know and learn… any subject that concerns governance.” 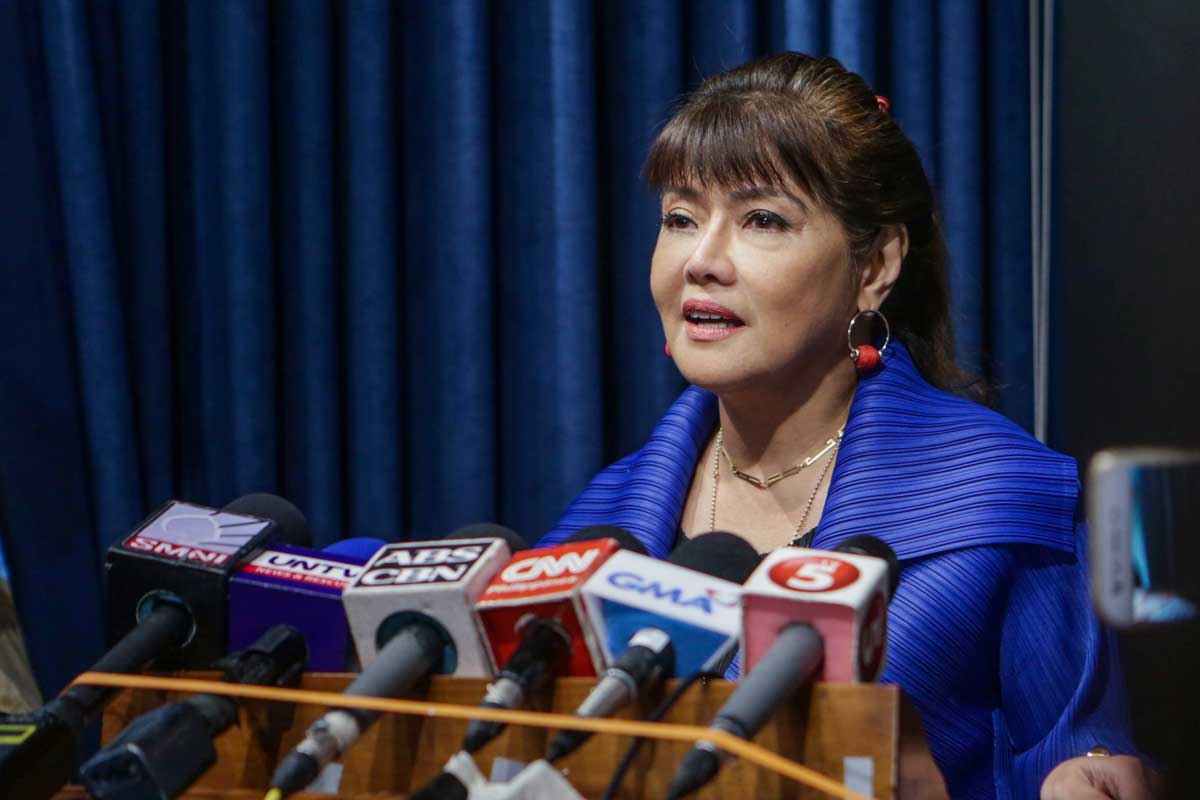 Mongaya said the daughter of the dictator need not worry as he assured her that the late strongman’s speeches and reasons for declaring martial law would be discussed, along with how the family benefited from it.

He also slammed Panelo’s recent pronouncement that martial law is a “tool to save democracy” while acknowledging that the abuses committed during the Marcos regime inflicted a “deep wound” on an entire generation.

Mongaya argued that while the Philippines enjoys some privileges of democracy, not everyone has access to it.

He said marginalized sectors, such as the poor and farmers, cannot easily enjoy the benefits of democracy in the current setup and martial law will only exacerbate the situation.

Proponents of the new subject earlier disclosed that the declaration of martial law by former president Gloria Macapagal-Arroyo and President Duterte would also be studied.

Arroyo placed Maguindanao under martial law in 2009 after a massacre occurred in the area while Duterte declared martial law in Mindanao in 2017 when Marawi City was attacked by Maute terrorists. After the five-month siege, martial law was extended for a year with the concurrence of Congress. Martial law has been extended for yet another year in the entire Mindanao.

Vice President Leni Robredo suggested on Sept. 22 that a subject that tackles the situation of the country under martial law be taught not just in UP Diliman but in other universities in the country as well.

She believes that students will get accurate information about martial law in schools instead of on social media. Robredo has often criticized what she describes as the revision of history by the Marcos family and their allies.