Traditional Jeepneys May Resume Operations, But Are The Least Priority Along With Motorcycle Taxis

The traditional jeepney – which used to be the “king of the road” – is now at the bottom of the public transportation hierarchy, and officials have conflicting statements on whether it can resume operations by the end of the month. 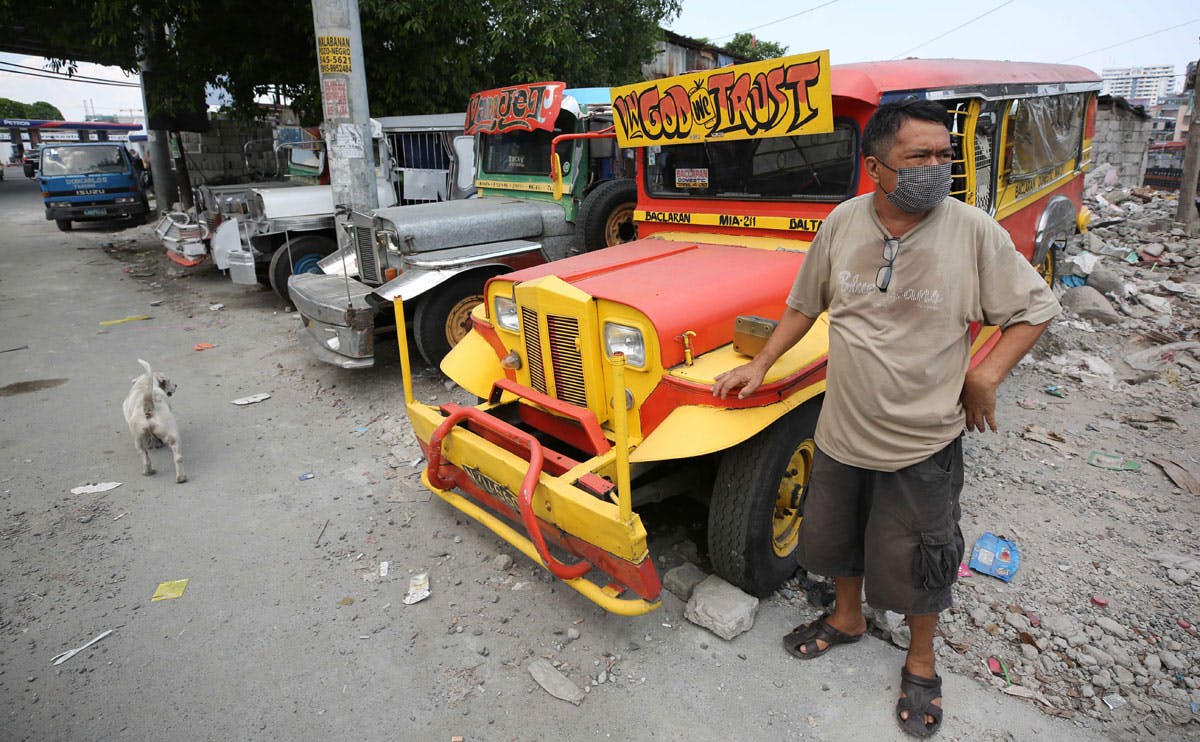 Jeepneys are seen parked along a sidewalk in Pasay City on June 3, 2020 as the government banned their operations since mid-March in line with quarantine measures to prevent the transmission of the coronavirus disease 2019. Photo by Russell Palma, The Philippine STAR

On Monday, June 22, the Department of Transportation (DOTr) posted on its Facebook page photos of modern public utility vehicles or PUVs that it described as the future of commuting in the country.

According to the DOTr, these PUVs are powered by cleaner and more fuel-efficient engines, making them more environment-friendly with lesser carbon footprint, thus preventing respiratory-related illnesses.

“Modern PUVs also offer comfort and convenience, as they provide spacious and cozy seats, with select models being air-conditioned,” the DOTr said.

Some of the PUVs have maintained traditional jeepney designs. Others have been modernized and equipped with automated fare collection systems or AFCS, WiFi, and high standard safety and security features such as dash cameras, closed-circuit television or CCTVs, speed limiters, and global positioning system or GPS.

“The amenities of these modern PUVs are designed to offer passengers a much dignified way of commuting,” the DOTr said. “Moreover, modern PUVs have configurations that are persons with disabilities (PWD)-friendly.”

In modernizing the jeepney, the DOTr assured the public that it does not choose any particular manufacturer, adding that it’s up to the operator to select the manufacturer or model to buy.

All modern jeepneys must pass scrutiny by the Bureau of Philippine Standards of the Department of Trade and Industry to check if they are compliant with Philippine National Standards. The Department of Science and Technology is in charge of taking the measurements of the units.

“With this transformation, we foresee that the country’s public transportation will gradually change,” the DOTr said, adding that modern PUVs could be “catalysts of growth.”

“This is a future full of HOPE that the best is yet to come for our commuters,” the DOTr wrote. 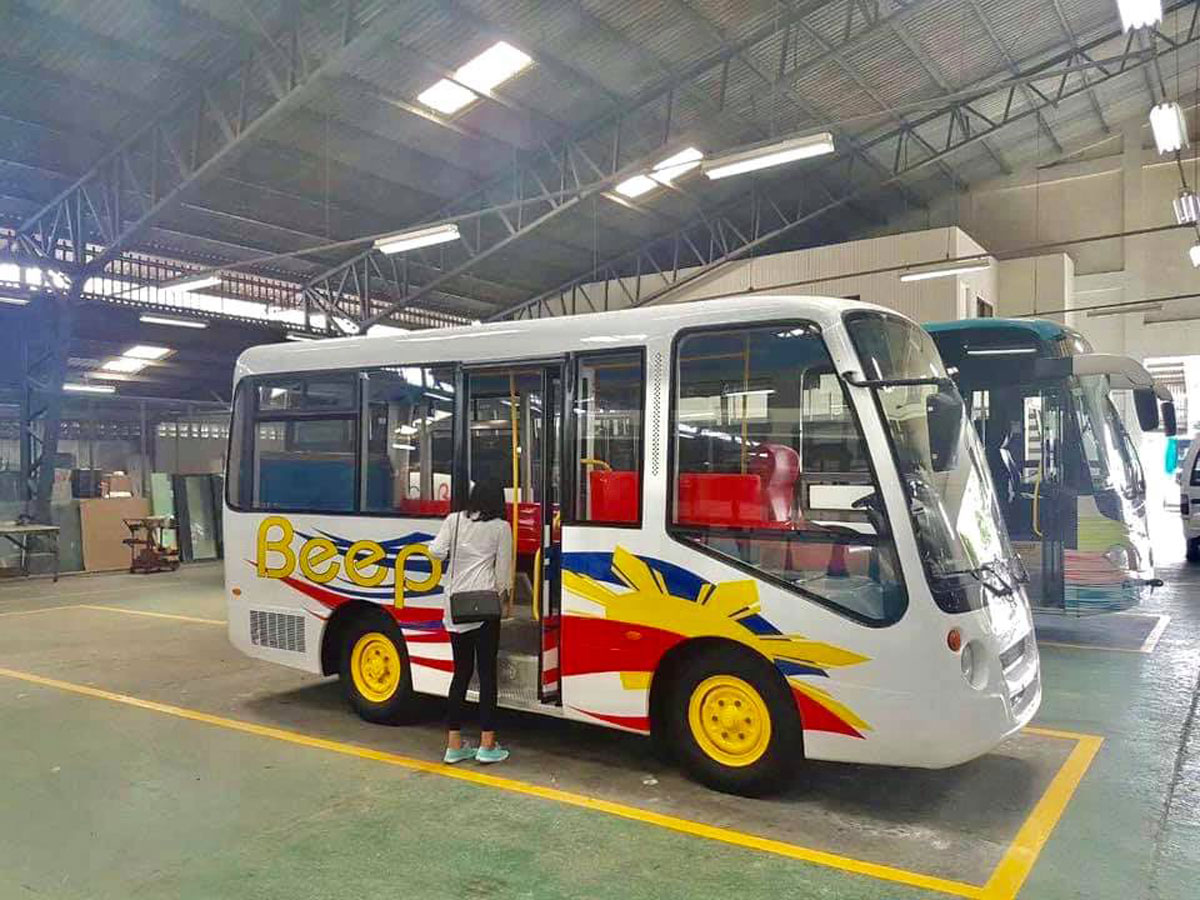 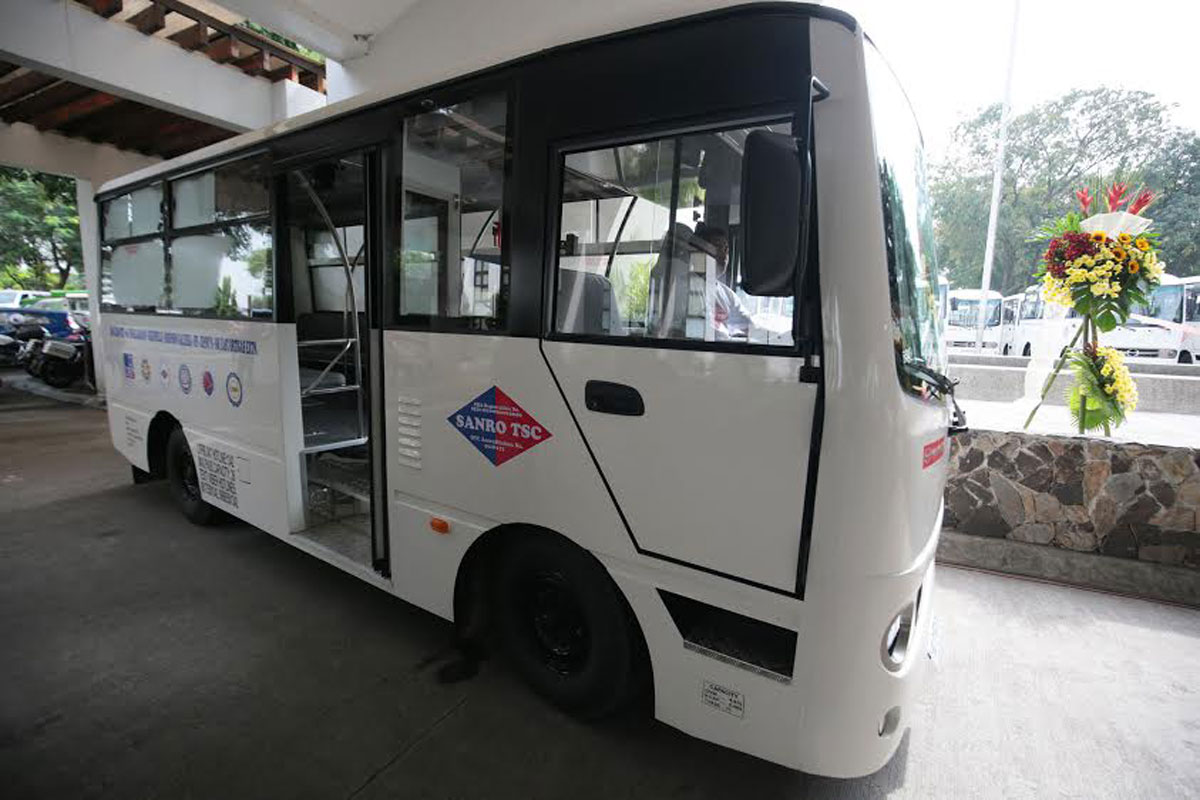 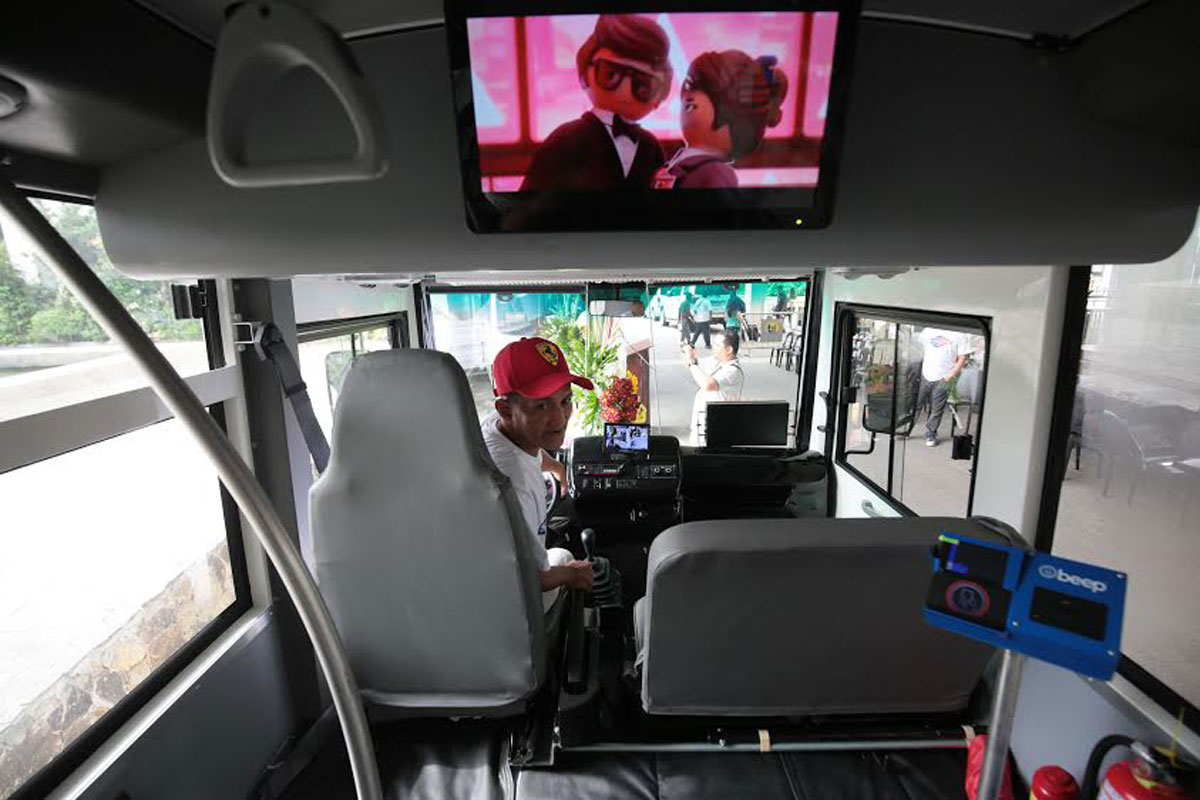 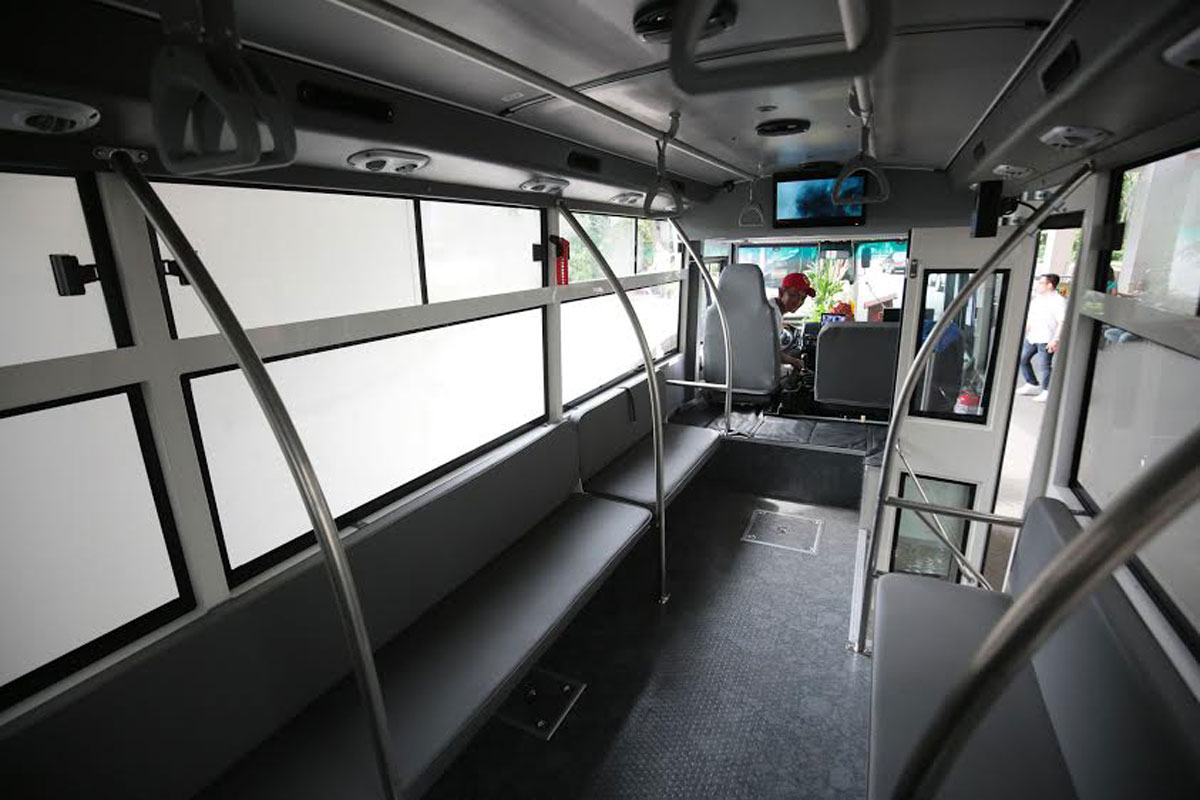 The administration has been pushing for the modernization of the country’s public transportation system. On Oct. 17, 2017, President Duterte warned the traditional jeepney drivers and operators to comply with the PUV modernization program or “get out.”

This was in response to criticism, particularly by the Pinagkaisang Samahan ng mga Tsuper at Operator Nationwide or Piston, that his policy was anti-poor.

Speaking to One News / TV 5’s “The Chiefs” on June 1, DOTr Assistant Secretary Alberto Suansing said the community quarantine would allow the government to implement the PUV modernization plan.

“It is true that there is a plan to phase out traditional jeepneys. They knew it was coming since 2017. That’s why we came up with omnibus guidelines to change the transportation landscape in the country,” Suansing bared.

Traditional jeepney operators and drivers have been given until June 30 to form cooperatives or rationalize their franchises, otherwise “they lose a chance of (having) another franchise to operate on that route,” according to Suansing.

He reiterated this in another interview with “The Chiefs” on Monday night, June 22.

Crowding in public transportation facilities, the government said, could facilitate the transmission of coronavirus disease 2019 (COVID-19).

Under the GCQ, the DOTr allowed the resumption of public transportation services in two phases. The first phase, which was implemented from June 1 to 21, permitted trains, bus augmentation, taxis, transport network vehicle services (TNVS), shuttle services, point-to-point buses and bicycles to resume operations. The second phase, which started on Monday, June 22, allowed the deployment of 308 modern jeepneys on 15 routes as well as more buses.

UV Express units are supposed to resume operations under the second phase, but Land Transportation Franchising and Regulatory Board chairman Martin Delgra III said the agency is still “fleshing out the intricacies of formulating the guidelines” for the vehicles.

Presidential spokesman Harry Roque said traditional jeepneys would be allowed to resume operations only if public transportation remained inadequate despite the availability of trains, buses, modern jeepneys and other modes of mass transport.

Roque and Delgra said the government would follow the hierarchy of public transport modes, wherein traditional jeepneys are at the bottom because of the difficulty of observing safe distancing in the vehicles.

“Do not worry because the convenience of riders will be the primary consideration of LTFRB,” he added.

Asked whether traditional jeepneys would no longer be allowed to resume operations if there are enough means of mass transportation, Roque replied: “Tingin ko po, kung sapat (I think so, if there is enough).”

He said the LTFRB is still assessing if public transportation facilities would be enough if the traditional jeepneys would be removed.

Some traditional jeepney drivers have resorted to begging due to the loss of their livelihood since the quarantine measures were imposed. This is despite the government’s P205-billion aid program that provides financial assistance to drivers and other sectors affected by the quarantine. The government also said they could be tapped as contact tracers, who are normally healthcare personnel who track down the individuals who had close with people who tested positive for COVID-19, or for delivery services. There were no details given, however, as to how these proposals could move forward. 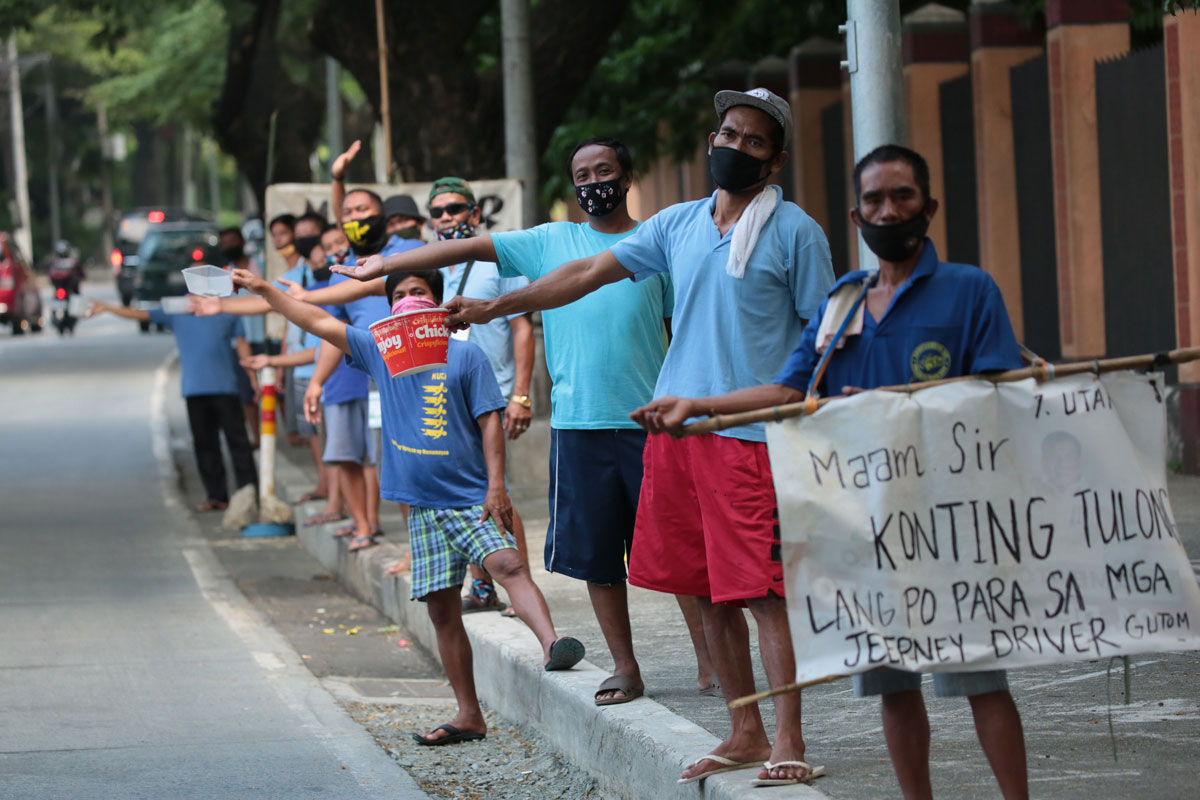 Officials explain that the hierarchy of public transportation must be observed to strike a balance between public health and the mobility of workers and the public in general.

The government says it has deployed enough mass transportation options for commuters as it eases quarantine rules to revive the economy. Health and safety protocols such as physical distancing, however, must be followed.

Officials believe limited public transportation services will suffice at this point because the number of people who currently need transport options has gone down to roughly five million in terms of “person trips” amid quarantine restrictions that remain in place.

This is down from 70 percent of the 14 million residents of Metro Manila who needed to take public transportation before the pandemic, aside from the commuters coming in from nearby provinces.

However, this estimate could be low as more and more workers are going back to their offices.

Government officials stress that there are enough “buffers” for mass transportation if the number of commuters swells.

With mass transportation a “vulnerable sector” during the pandemic, the officials say that they have set out a calibrated reopening of the road transport system in the National Capital Region.

Here’s the hierarchy in the reopening of mass transport options.

The bus industry was among the first road transport sectors to resume operations when Metro Manila shifted from ECQ to GCQ on June 1.

But drastic changes were made to the bus system in Metro Manila, with total bus routes down to a third compared to the number before the COVID-19 pandemic.

Over 4,600 bus units covering 31 “rationalized” routes have been opened by the government to serve the public – down from over 90 before the COVID outbreak.

There are also 271 point-to-point buses deployed along 28 routes.

The pandemic effectively fast-tracked the government’s planned rationalization of bus routes, which was already in the works even before the mass transport shutdown in mid-March.

However, the operations of provincial buses will take longer to iron out.

Delgra noted that approval from the concerned local government units (LGU) would have to be complied with by the bus companies before their units can ply provincial routes.

Some LGUs are still restricting the movement of people from other cities and provinces in order to control the transmission of COVID-19 in their areas of jurisdiction.

This has affected bus operators, with one of the oldest bus companies laying off 400 employees due to drastically reduced operations.

Roque said the LTFRB and the Inter-Agency Task Force on the Management of Emerging Infectious Diseases (IATF) are studying guidelines for provincial buses.

“It depends on the quarantine status of the area. If you allow provincial buses, there would be cross-border movements. If it is allowed, it may be limited to areas with a low number of cases, the MGCQ (modified general community quarantine) area,” Roque noted. 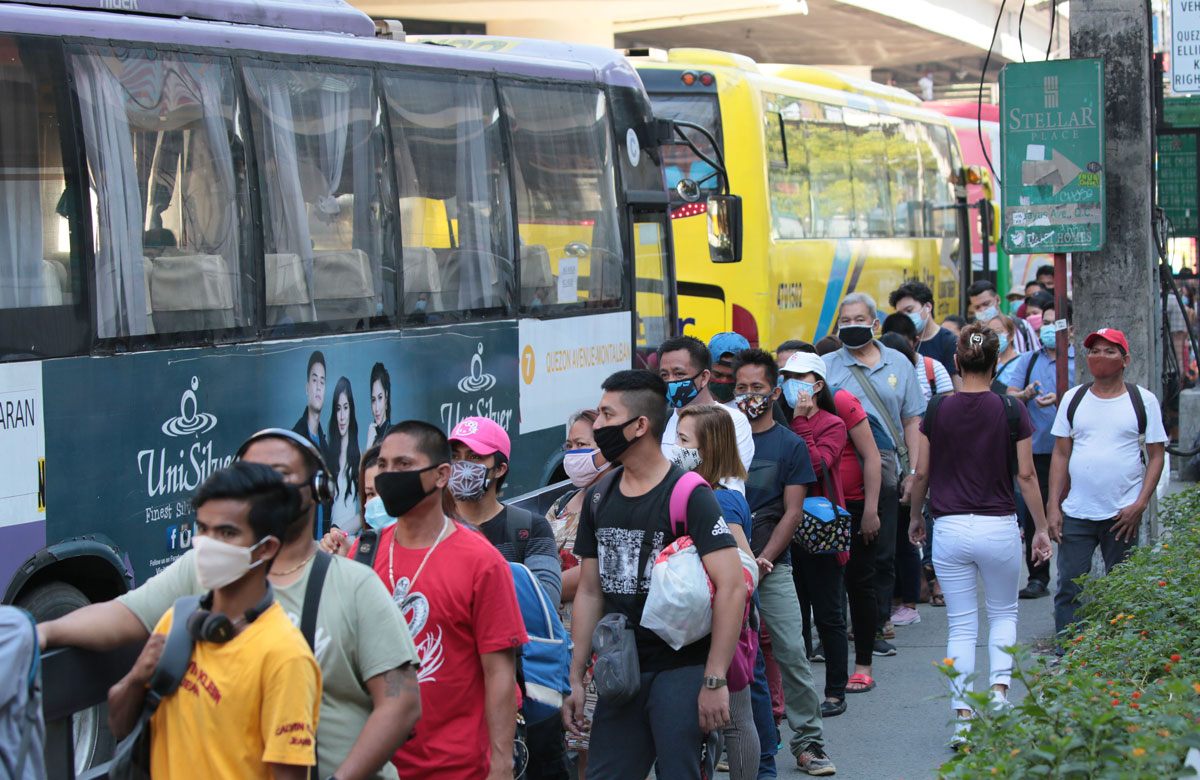 Almost 40,000 taxi and TNVS units have been authorized by the LTFRB to resume operations. The number includes 20,596 TNVS units under ride-sharing companies and 19,238 traditional taxis.

To ensure the safety of passengers, the LTFRB has set stringent health and safety protocols for this sector.

Included in the protocols are the limited passenger capacity, mandatory wearing of face masks and gloves, regular disinfection of the vehicle, and putting up of non-permeable barriers between the driver and the passenger.

Only cashless transactions will be allowed.

Considered to be the “lowest” in the transport hierarchy, only limited operations of these three clusters have been approved by the government.

First to be deployed were modern or “standardized” jeepneys. Delgra said these jeepneys were prioritized as limited passenger capacity and health protocols are easier to observe in these vehicles.

There are over 170,000 jeepneys in the country. Before the pandemic, the sector served around three million passengers in Metro Manila alone in over 100 routes.

Roque said UV Express units would be allowed to resume operations within the month. He said there are 30 new bus routes to address the problems of commuters. 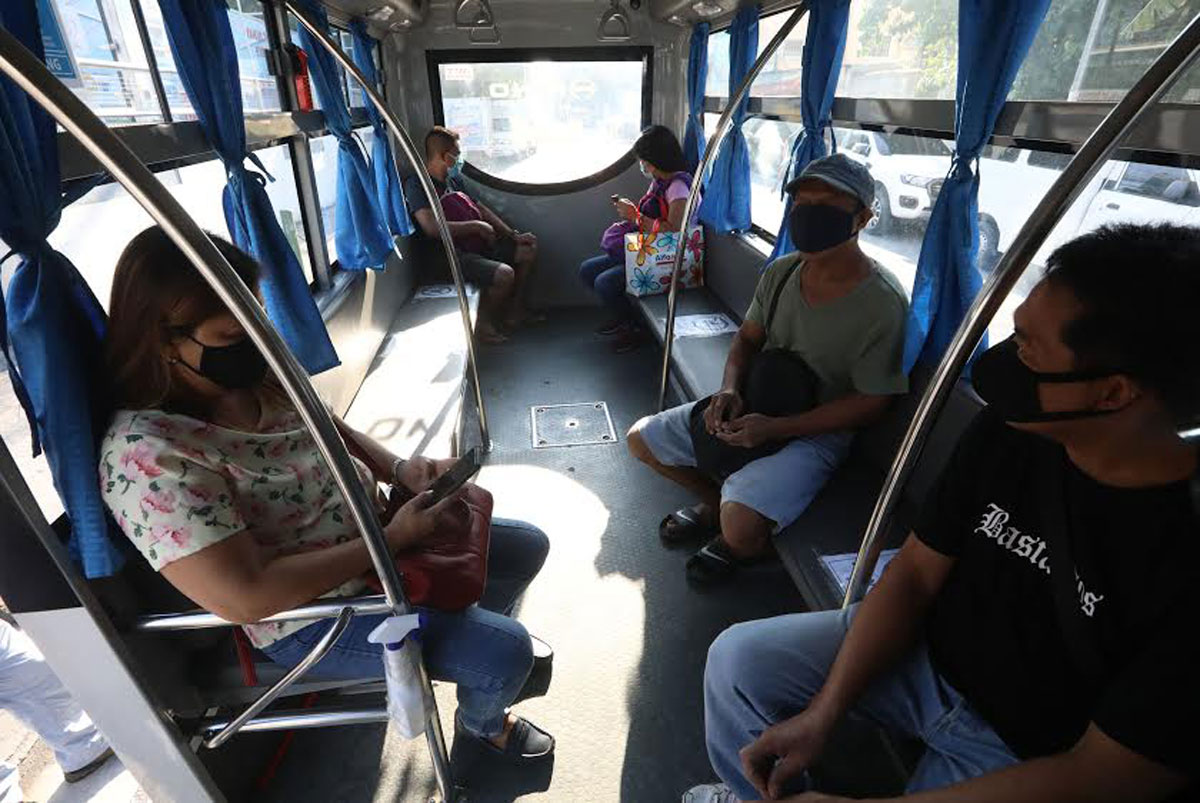 Motorcycle taxi operations have been a controversial road transport issue even before the pandemic hit the country.

The resumption of motorcycle taxi operations is in limbo not only due to the COVID-19 outbreak, but also due to legal issues.

Motorcycle back riding was approved in principle by the IATF last week, according to Malacañang.

But the government has yet to release the guidelines on this. It has long maintained that physical distancing is difficult to observe in back riding.

Some officials, including Cavite Gov. Jonvic Remulla, have asked that back riding be allowed for married couples or family members to help ease transportation woes.

Motorcycle-taxi providers Angkas and Joyride recently unveiled their proposals on safety and health protocols for their operations.

Their proposal, which includes the placement of a plastic barrier between the driver and the back rider, has yet to be approved as questions on safety persist.

Legally, motorcycle taxis are still not recognized as a mode of public transportation. The pilot run for the sector, which already has over 46,000 registered riders, ended on March 23.

“They need to secure a franchise from Congress,” Roque said.

Roque disclosed that Bohol Gov. Arthur Yap has proposed a motorcycle design called “Yap Contraption” that would ensure safe distance between the rider and driver.

Delgra said with the end of the pilot run, and pending the passage of legislation to allow motorcycle taxis to legally operate, only the IATF could approve the resumption of their operations.

He noted that while the road transport sector faced enormous challenges in reopening, all industries faced similar problems, and the burden should be collectively borne by all stakeholders.

“We reiterate the calibrated and partial response. We have been saying that health and safety must come first before anything else, masakit mang pakinggan,” Delgra said in response to criticisms on the lack of mass transportation amid the pandemic.